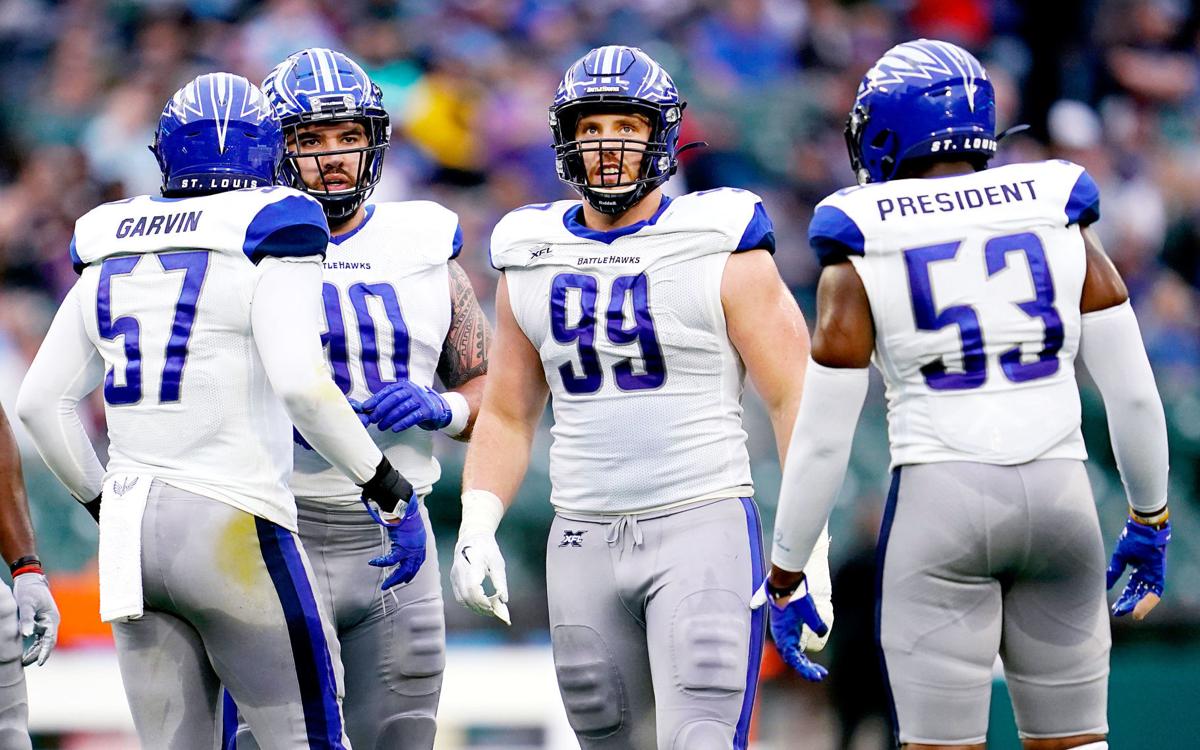 Former Shenandoah University football standout Jake Payne (99) competed in the XFL with the St. Louis BattleHawks before the league canceled the rest of its season amid the COVID-19 outbreak following the completion of Week 5 on March 8. 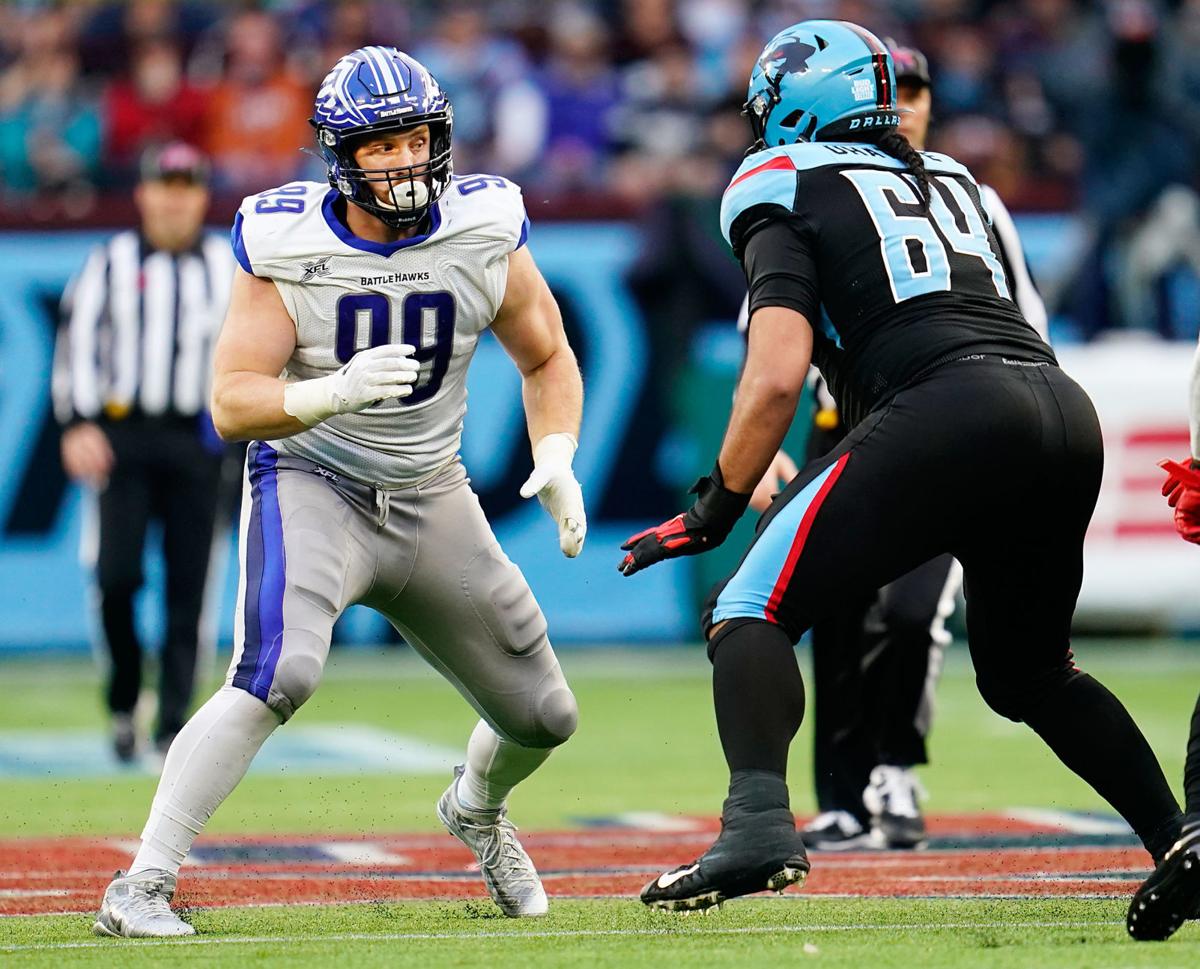 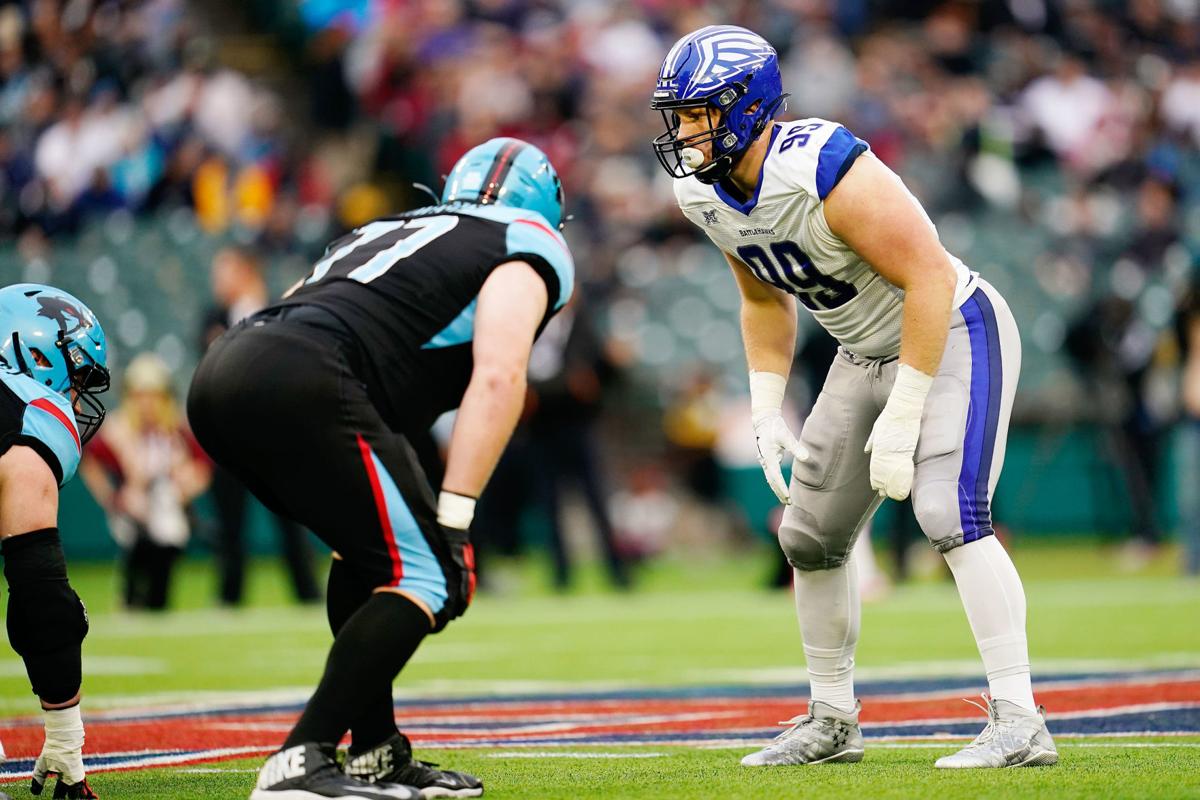 St. Louis BattleHawks defensive lineman Jake Payne (99) lines up before the snap during an XFL game against the Dallas Renegades on Feb. 9. The XFL filed for bankruptcy last week, leaving Payne searching for another way to extend his playing career.

Former Shenandoah University football standout Jake Payne (99) competed in the XFL with the St. Louis BattleHawks before the league canceled the rest of its season amid the COVID-19 outbreak following the completion of Week 5 on March 8.

St. Louis BattleHawks defensive lineman Jake Payne (99) lines up before the snap during an XFL game against the Dallas Renegades on Feb. 9. The XFL filed for bankruptcy last week, leaving Payne searching for another way to extend his playing career.

The offseason came early for former Shenandoah University football standout Jake Payne as a result of the COVID-19 pandemic. Now, like most professional athletes across the country, Payne has to find a way to stay football ready in an era of isolation and stay-at-home orders.

He likely has found the answer.

Payne, whose pro football journey most recently landed him in the rebooted XFL with the St. Louis BattleHawks for the (since-canceled) 2020 season, said on Monday he’s rented a single-car garage to serve as a makeshift gym at the Fairfax apartment complex where he lives with former SU teammate Evan Griffin and BattleHawks tight end Connor Davis.

It’s not a glorious setup. Payne said he’s borrowed some gym equipment from Justin Kavanaugh, Payne’s trainer and the founder of The Sport and Speed Institute in Chantilly. Picturing Payne, (a muscled-up defensive lineman who is listed at 6-foot-4, 270 pounds), Davis (6-7, 254) and Griffin (who was listed at 6-3, 250 during his senior season at Shenandoah in 2013) trying to share what Payne described as an 8-by-10-foot space filled with weights while trying to abide by COVID-19 social-distancing guidelines conjures quite the image.

But Payne is all for making the most out of his most current obstacle, and as he was describing his new setup on Monday afternoon, he sounded genuinely eager to give his new gym a try.

“I’m excited, man, because it’s like old school, you know what I mean?” he said. “We used to work out in garages growing up. Growing up, I had a gym in my mom’s barn, an old rickety gym in an old 1800s barn -- deadlifting on the top floor of an 1800s barn, the whole thing starts shaking. I’m actually kind of excited.

“There’s no better comparison than in ‘Rocky IV’ when he went to Russia to train by himself, just like on his own,” Payne added, referencing the 1985 film starring Sylvester Stallone as the title character, boxer Rocky Balboa. “That’s kind of the way I’m approaching this, like the past four years of playing professional football … I’ve had a lot of things available to me and some nice amenities and now it’s like hey, it’s time to get back to the grind, essentially, doing some stuff on your own.”

Payne, who was the Old Dominion Athletic Conference Defensive Player of the Year as a senior at Shenandoah in 2015, is used to adversity by now.

Facing the daunting task of pursuing a pro career as a Division III athlete, Payne fielded a few NFL rookie minicamp invites after his senior season but never found his way onto a roster. In December 2016 he signed a non-guaranteed contract with the Canadian Football League’s Montreal Alouettes, only to learn as training camp was approaching less than four months later that the team no longer had a spot for him. He ended up in the Arena Football League in 2017 with the Washington Valor, where he played two seasons and won an Arena League championship in 2018.

From there, he moved on to the Alliance of American Football, which debuted in 2019 but didn’t last a full season before folding in April.

Payne was picked up by the BattleHawks during the XFL draft last October and made his debut on Feb. 9 in St. Louis’ season-opener, but for the second time in as many years, he had his season abruptly brought to a halt when the new coronavirus outbreak brought the sports world to a standstill in mid-March. The XFL, which contested games for five weeks, canceled the remainder of its season on March 12.

“It’s life, things happen,” said Payne, who, like all other XFL players, was on a one-year contract with the BattleHawks. “We’re fortunate enough that the league is taking care of us. We’re still getting paid through May. It’s really tough for us to complain because at the end of the day we still have jobs and there are people out there who are losing their lives, literally, because of this virus. I don’t really think we’re in a position to complain. It’s just some adversity. I’ve been handling adversity my whole life as far as my football career goes, dealing with not ideal situations, so it’s another step in a long journey.”

Though short, Payne enjoyed his first season in the XFL, a league that initially debuted in 2001 but lasted just one season before it was resurrected in 2018.

In five games as a defensive tackle, Payne had seven total tackles, one sack and one tackle for loss. St. Louis was one of three 3-2 teams in the East Division when play was halted midway through what was supposed to be a 10-game regular-season schedule.

Payne said there was “no doubt in my mind” that the BattleHawks were on the path to winning the XFL championship in 2020.

“We had a really good group of guys, man, like real close, just a good team. Guys really showed up to work, got stuff done. For me, I really enjoyed being a part of that,” Payne said.

“The football was a blast, you know. I liked the rule changes. It helped the game go by, just constant action and stuff. I’ve never been a part of something like we had in St. Louis as far as the fans, the connection with the fans, the city itself. Just being a part of the city like that, it was just incredible.”

Payne said the city of St. Louis, which lost its NFL franchise following the 2015 season when the Rams moved back to Los Angeles, immediately embraced its new professional football team.

He recalled a moment that occurred the evening before the BattleHawks’ home opener on Feb. 23, when he and Davis, who were wearing team-issued sweatshirts, were in line at a local sporting goods store and the 15 or so people in front of them realized they were standing next to a pair of BattleHawks players.

It turned out, Payne said, that everyone in line was attending the game the following night, and some of them were buying BattleHawks gear specifically for the occasion.

“Suddenly all those people, it just brought them all together,” Payne said. “... It was really cool, just stuff like that all the time. And not having played in the NFL, I’d never experienced anything like that. Even guys that played in the NFL were like there’s a whole lot of places that it’s not like this.”

As far as what the future holds, Payne said he’ll be ready for whatever’s next. In the meantime, he’ll continue to work out in his garage-turned-gym.

“I’m gonna be training in my little one-car garage in June, it’s gonna be hot, but like I said, I just think it’s gonna be making me mentally tougher,” Payne said. “Of all the things I’ve had to deal with over the years, this is probably the easiest of things to overcome. I’m actually excited for it. I’m literally excited to get back to like an old school, forget professional football type of stuff. This is old school, I’m a sophomore in high school just trying to get a college scholarship workout.”