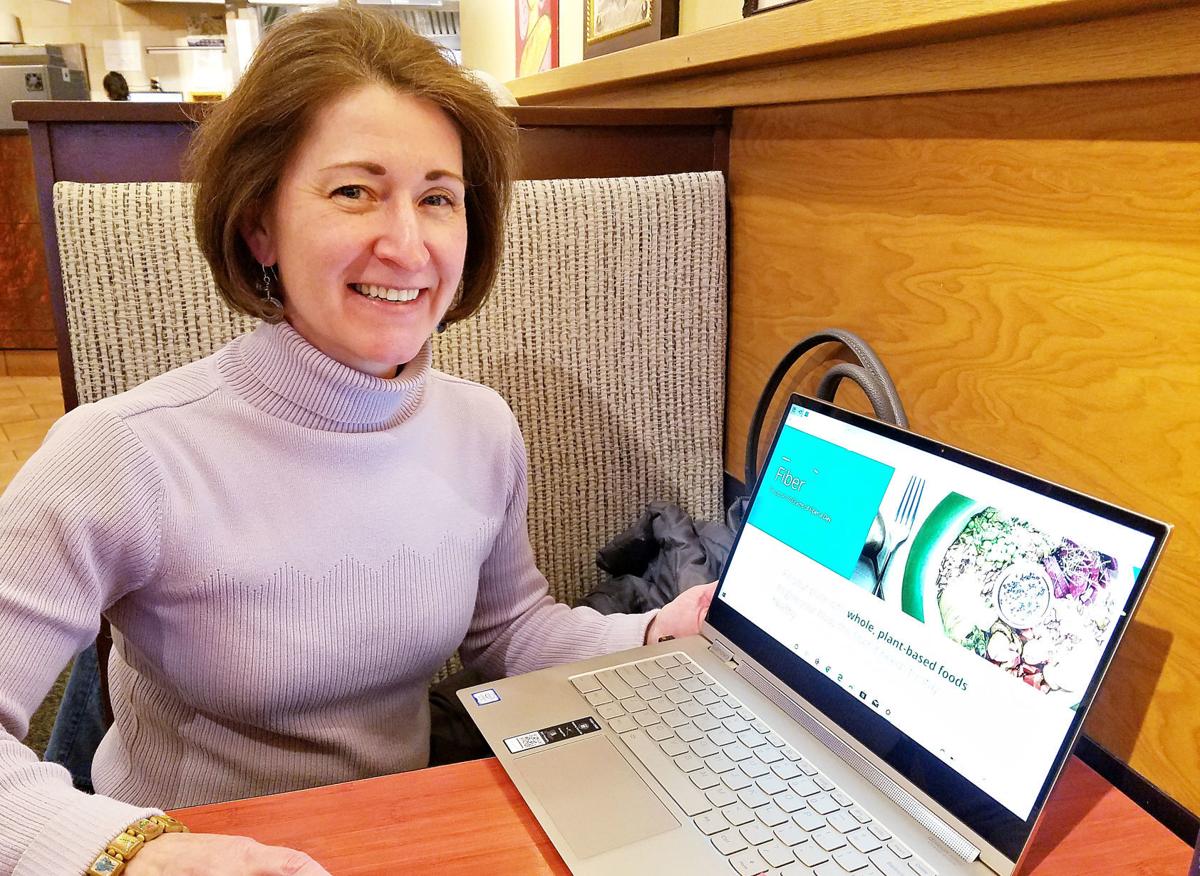 Donna Michel, a nephrologist in Winchester, talks recently about plant-based diets. She said a diet that’s low in fats such as oils and high in fiber from fruits and vegetables is a healthy food plan that people can maintain for life. 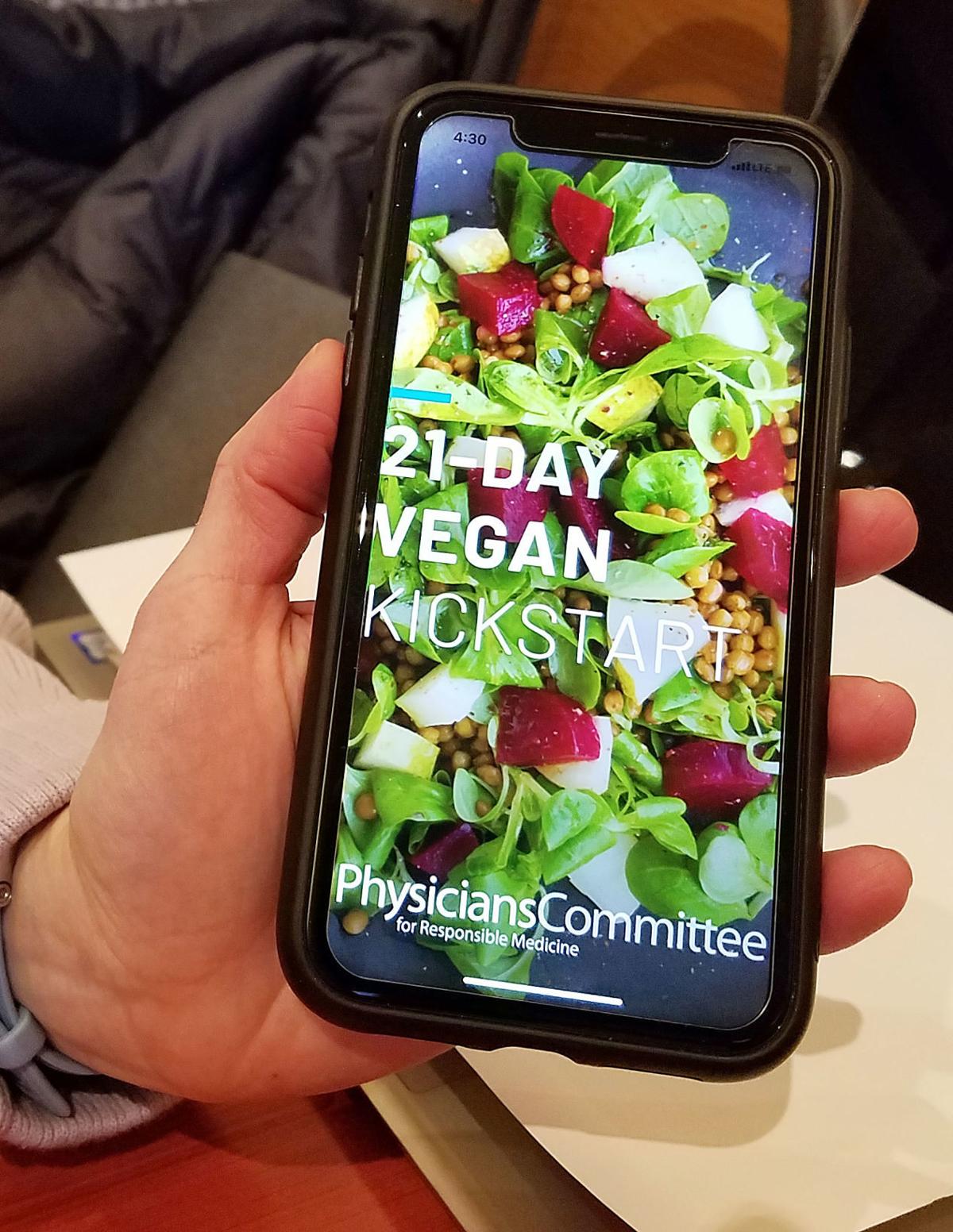 Donna Michel, a nephrologist in Winchester, shows the “21 Day Vegan Kickstart” app on her phone from the Physicians Committee for Responsible Medicine.

Donna Michel, a nephrologist in Winchester, talks recently about plant-based diets. She said a diet that’s low in fats such as oils and high in fiber from fruits and vegetables is a healthy food plan that people can maintain for life.

Donna Michel, a nephrologist in Winchester, shows the “21 Day Vegan Kickstart” app on her phone from the Physicians Committee for Responsible Medicine.

WINCHESTER — Those looking to get healthy this year might be tempted to consider a fad diet. But health professionals say it’s healthier and more practical to choose a healthy lifestyle instead.

Plant-based diets are becoming all the rage as more and more options for vegans make their way to area restaurants and grocery stores.

These are signs of a culture shift, said Donna Michel, a retired nephrologist in Winchester who also has a certificate in plant-based nutrition and is board certified in lifestyle medicine.

“When we talk about plant-based diets for health,” she said, “the things that we’re mainly talking about are avoiding animal products, avoiding eating added oils and eating primarily whole plant foods.”

The beauty of a low-fat, high fiber food plan, she said, is that participants don’t have to count calories or portion out food. They can eat as much as they need to because it’s healthy and is packed with fiber.

“You feel full, you feel satisfied, you’re not looking for the next thing to eat,” she said. “You lose weight, and once you lose it, you maintain it. And I think that’s what makes this sort of a diet successful, because it’s not technically a diet. What it is is a lifestyle change.”

Choosing plant-based foods over others comes down to avoiding missed opportunities to eat something healthier, Dr. Michael Greger writes at his website nutritionfacts.org, a nonprofit public service providing free updates on the latest in nutrition research.

“[T]here’s an additional opportunity cost to eating unhealthy foods beyond just how bad they themselves may be for our health,” he writes.

In terms of weight loss, he said it matters how people get their calories (the energy content of food.)

“A calorie is not necessarily a calorie,” Greger says in a trailer for his new book “How Not to Diet,” posted at his site.

“A hundred calories of chickpeas has a different impact than 100 calories of chicken or Chiclets based on their different ... factors such as absorption, appetite or our microbiome,” he said. “[E]ven the exact same foods eaten differently can have different effects. … The context in which we eat matters too.”

The terms vegan and plant-based are interchangeable, Michel said, but “plant-based” carries with it a connotation of being healthier than a vegan diet that simply eliminates meat, dairy and eggs.

A vegan diet can still be high in fat, sugar and other refined carbohydrates while being low in fruits, vegetables, nuts, seeds, beans and legumes.

Barnard and Michel also stressed that those who don’t eat meat should take a Vitamin B-12 supplement.

Plant-based diets are successful for weight loss because people can eat a greater volume of food so they don’t feel deprived, Michel said.

She referenced the 2017 BROAD study, a randomized, controlled trial that used a whole food plant-based diet to address obesity, ischaemic (coronary) heart disease and diabetes. It was published in the journal Nutrition & Diabetes and is indexed online at ncbi.nlm.nih.gov/pubmed/28319109.

The study concluded that it led to “significant improvements in BMI, cholesterol and other risk factors. To the best of our knowledge, this research has achieved greater weight loss at 6 and 12 months than any other trial that does not limit energy intake or mandate regular exercise.”

Michel said trial participants lost an average of 19 pounds during the three-month study, but even after six-month and 12-month check-ins had maintained their weight loss.

Those starting a plant-based diet should know that non-meat and non-dairy options can be highly processed, greatly reducing their fiber and nutritional density while increasing sodium.

Unlike some other diets, though, the plant-based diet embraces nutrient-rich carbohydrates.

Carbs aren’t what people should be worried about, she said. “Refined carbohydrates and refined starches are the problem.”

Avoiding processed foods and oils isn’t always easy, though, and Michel said she aims to keep those types of foods to 20 percent of her diet.

“It does take a little bit of planning,” she said. “It doesn’t have to be done expensively.”

Beans and rice are inexpensive, she pointed out, and although certain fruits and vegetables (berries, celery and anything with a thin skin) are healthier if organic, she said it’s more important not to avoid eating produce.

“I think part of the reason why plant-based diets are so foreign for people is it’s not the way we grew up,” she said. “It’s not the way we learned how to eat. It’s not what our food culture is in this country.”

However, she said it’s a lifestyle anyone can do if they make the effort to learn about and prepare healthy foods.

“You have one diet that fits all sizes. I think that’s the real beauty of it.”

The Physicians Committee for Responsible Medicine has an app for starting a plant-based diet, called the 21-Day Vegan Kickstart, for Apple and Android devices. For more information, visit kickstart.pcrm.org/en.