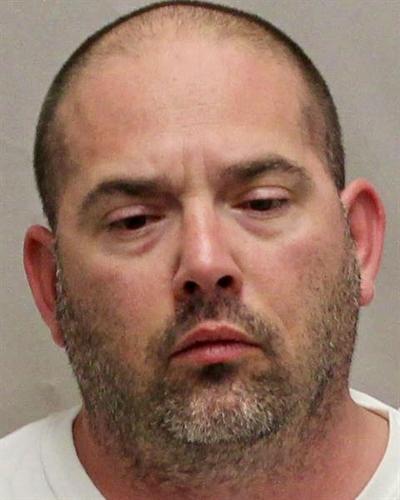 Police investigators gather in the front yard of a home at 400 Westmoreland Drive in Stephens City on Thursday after a five-hour standoff with an armed man in the home on Wednesday.

Police investigators gather in the front yard of a home at 400 Westmoreland Drive in Stephens City on Thursday after a five-hour standoff with an armed man in the home on Wednesday.

STEPHENS CITY — A Stephens City man reportedly fired hundreds of rounds of ammunition during a five-hour standoff with law enforcement before being taken into custody late Wednesday night.

Frederick County Sheriff Lenny Millholland said Daren Eugene Sullivan, 45, of 400 Westmoreland Drive near Stephens City, was very intoxicated during the incident and repeatedly said he wanted to die, either by killing himself or by pushing deputies to the point where they would have to shoot him.

“He was constantly saying he was going to take us out,” Millholland said. “He had a weapon that probably could have done a whole lot more damage than what it did.”

Millholland said Sullivan, who was reportedly upset over a domestic altercation that occurred prior to the standoff, allegedly used a handgun to fire .300-caliber Winchester Magnum cartridges — commonly referred to as .300 Win Mags — during the standoff. Those bullets are designed to take down big game such as elk and moose and are preferred by many law enforcement and military snipers because of their long-range accuracy.

Several people, including some of Sullivan’s relatives, were inside the home when the shooting began, Millholland said, but all of them were able to escape unharmed through a window. The number of people had not been verified as of Thursday morning.

There were also several pets at the house. Millholland said three dogs and two cats were uninjured and returned to Sullivan’s family once the standoff ended.

When Frederick County Sheriff’s Office deputies arrived at the scene Wednesday, they established a perimeter around Sullivan’s house and shut down streets in the residential area.

Over the next several hours, the media release states, Sullivan reportedly fired repeatedly and randomly while inside the dwelling. Members of the Sheriff’s Office’s Crisis Negotiation Team attempted speaking with him but had little success.

Most of the bullets that were reportedly fired by Sullivan stayed inside his house, but Millholland said a few shots apparently were aimed at law enforcement.

“He actually fired in the direction of our deputies who were there,” Millholland said. “There were at least 15 bullets that left the residence.”

When the incident began, deputies advised Sullivan’s next-door neighbors to leave their homes and seek shelter elsewhere, Millholland said. Seven people, including some of Sullivan’s family members who had been inside the house, spent the evening at Abundant Life Church at, about a mile away. The Frederick County Sheriff’s Office also established a temporary command center at the church at 700 Aylor Road.

There was good reason to be concerned for the neighbors’ safety.

“Today we were able to locate a residence behind the house where a [fired] bullet was inside,” Millholland said on Thursday morning.

As the standoff progressed, the number of shots being fired inside the house began to decrease, the media release states. Since negotiations with Sullivan had proven to be futile, deputies fired tear gas canisters inside the house.

A Virginia State Police robotic camera and a Frederick County Sheriff’s Office drone were able to look inside the house and determined that Sullivan was unconscious on the floor, the release states.

“We don’t know what knocked him out, but it’s very possible his intoxication is what put him to sleep,” Millholland said.

The Sheriff’s Office’s SWAT team entered the home at 10:19 p.m. and took Sullivan into custody without incident.

He was taken to Winchester Medical Center and remained there overnight. Millholland said Sullivan was treated for issues related to Wednesday night’s incident but, due to federal HIPAA regulations regarding patient privacy, he could not elaborate.

Sullivan was transferred late Thursday morning to the Northwestern Regional Adult Detention Center in Frederick County, where he is being held without bail on a felony charge of discharging a firearm inside an occupied building. Millholland said at least five more charges are pending, some of which may be in the form of direct indictments by a Frederick County Circuit Court grand jury.

“Right now he has a charge that we know we can hold him on,” Millholland said, “and then we’ll do direct indictments or whatever on those other charges.”

Millholland said he has heard complaints about the Sheriff’s Office waiting five hours before moving in to end the situation, but patience proved to be the key to resolving Wednesday’s incident without anyone, including Sullivan, getting hurt.

“It’s better to keep him contained in the house and try to use whatever means, such as tear gas, to get him out or to have him to the point where he succumbs in a manner ... that we can take him into custody with the least amount of injury to him,” Millholland said. “People say, ‘Why didn’t you just take him out?’ Well, you can’t do that. You’ve got to use all means possible to take him into custody without endangering the lives of other people.

“Bottom line, he’s alive, all our people are alive and the people that were in the house are alive,” Millholland said. “It cost the taxpayers of Frederick County a whole lot of money, but everything turned out the way the good lord said it was supposed to.”