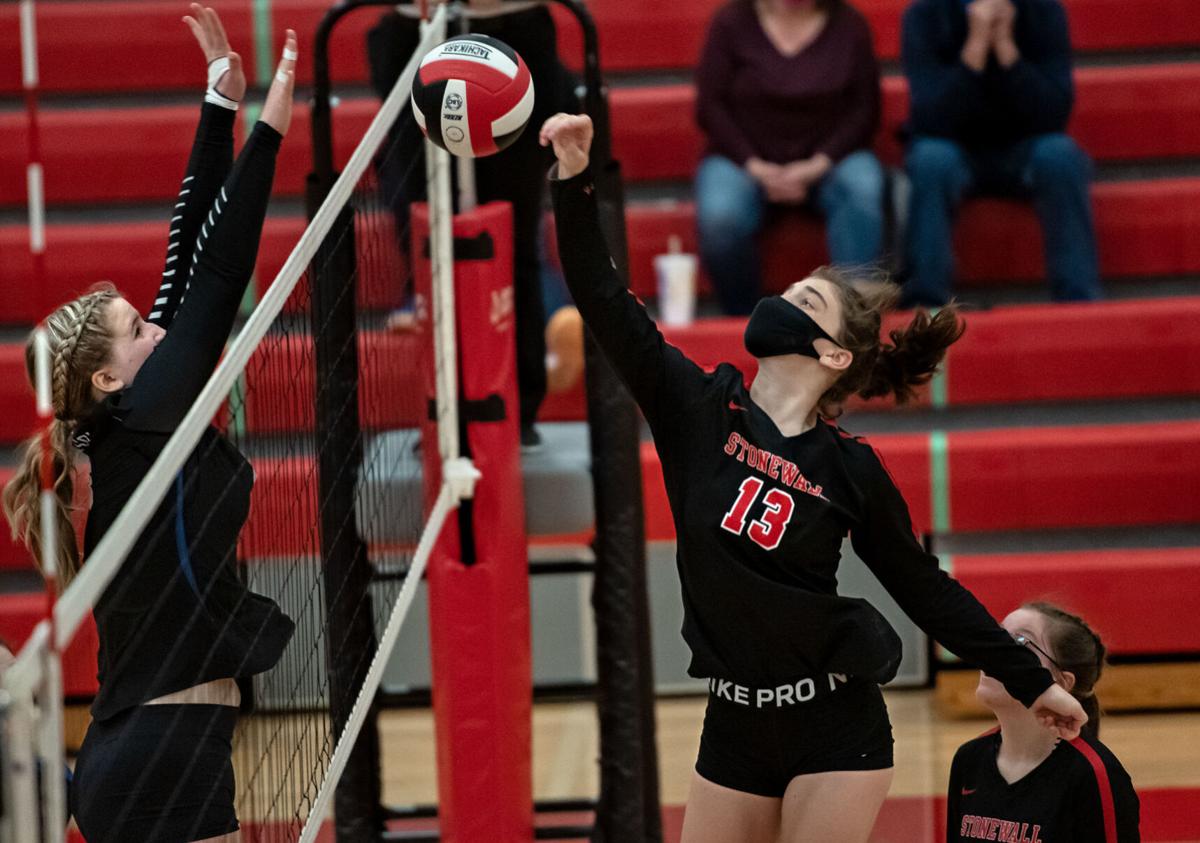 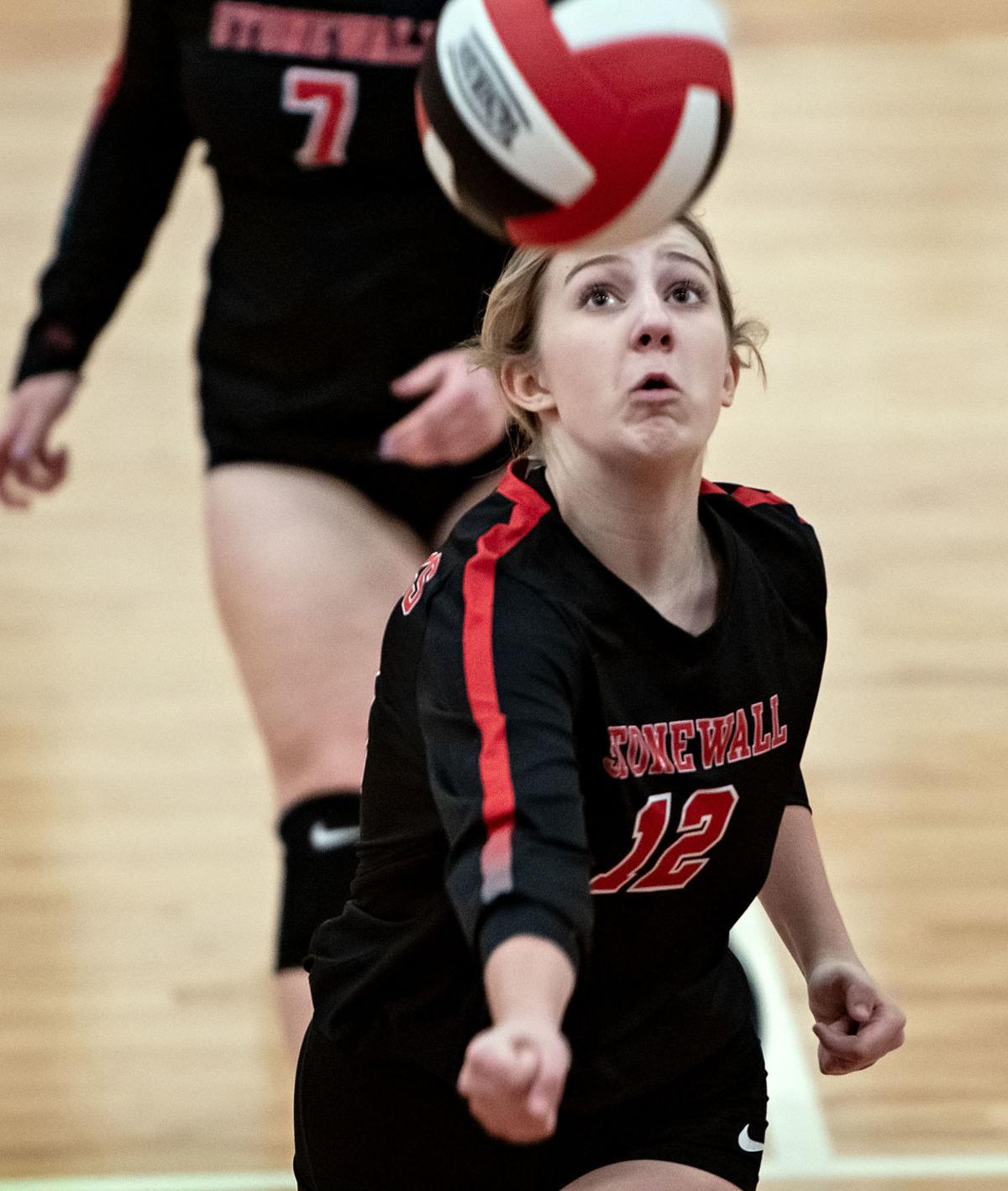 Stonewall’s Amelia Hess digs the ball as she comes up with a save near their bench. 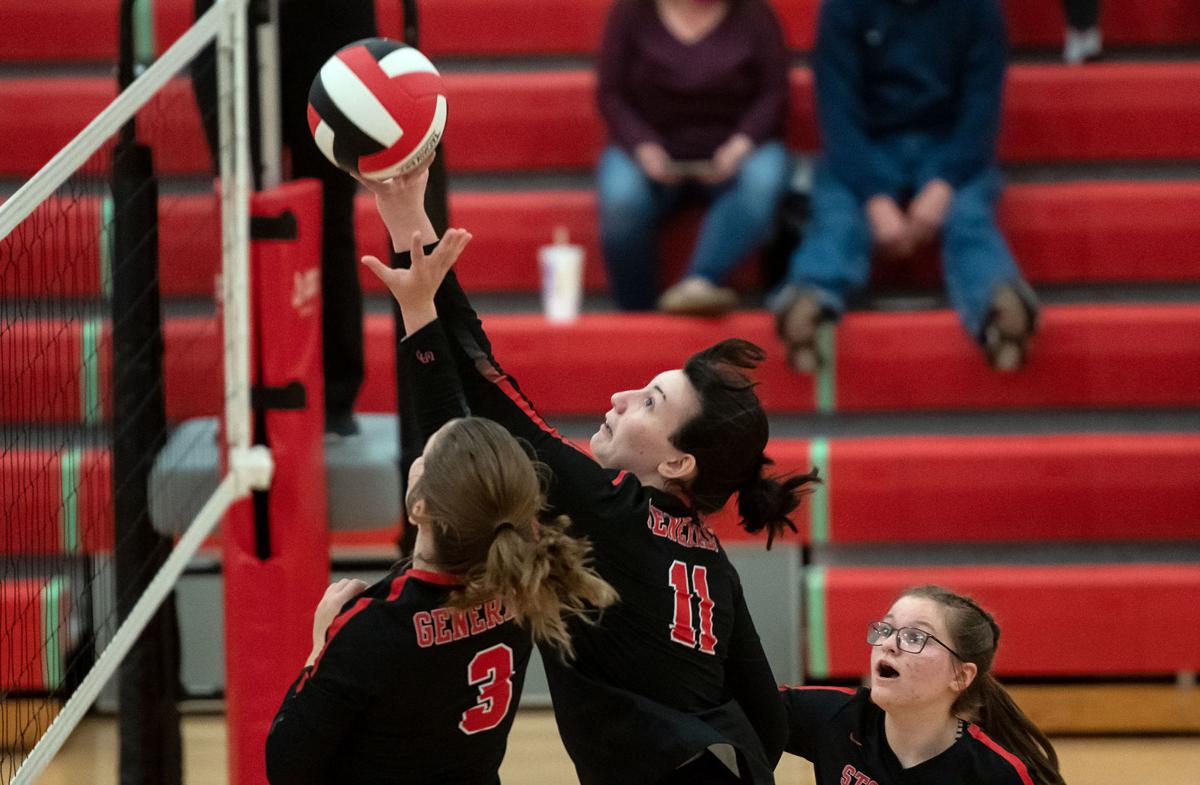 Stonewall’s Lilly Blank sends the ball over the net as Kylene Franklin, left, and Alexis Franklin, right, look on. 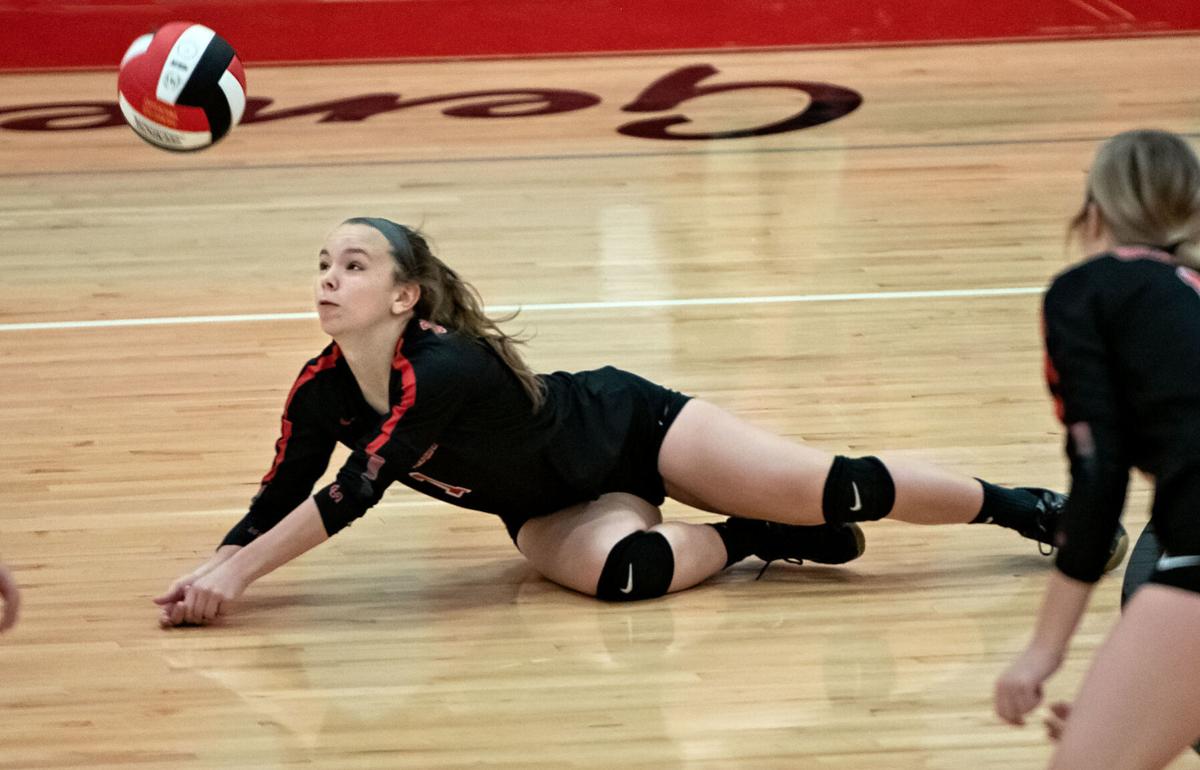 Stonewall’s Katie Jordan gets on the floor for a save. 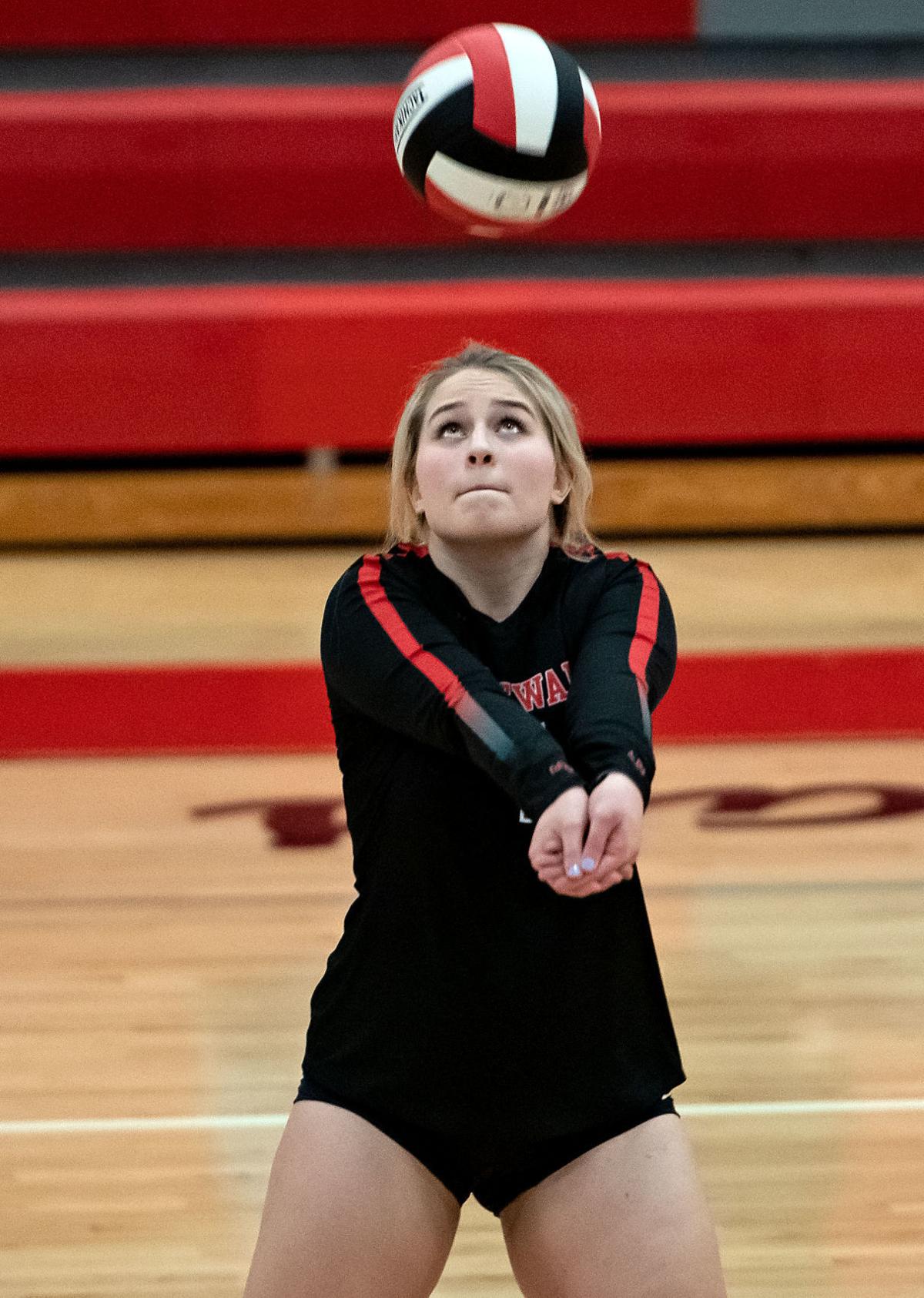 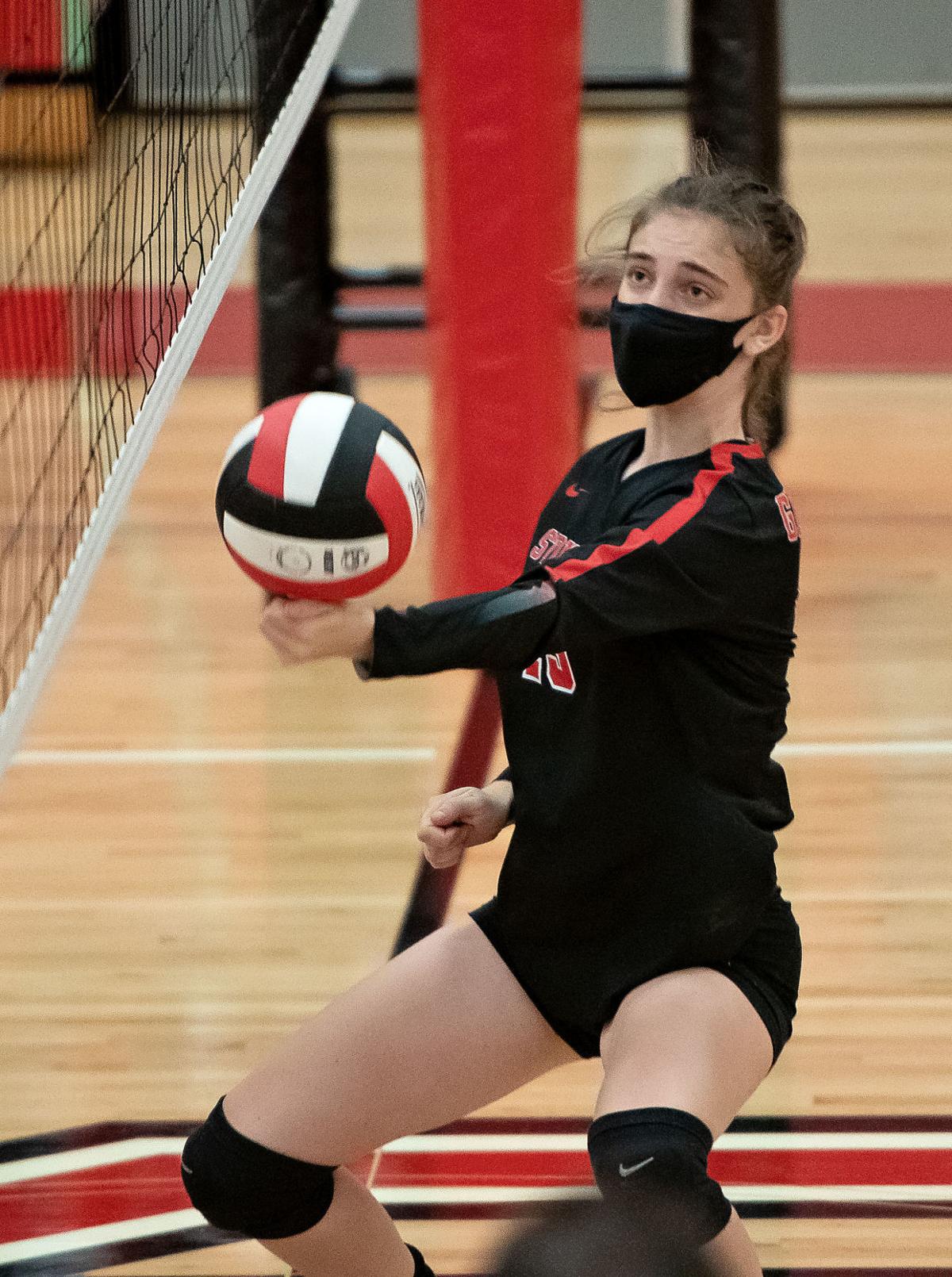 Stonewall’s Annika Dellinger digs the ball with her left hand for a save. 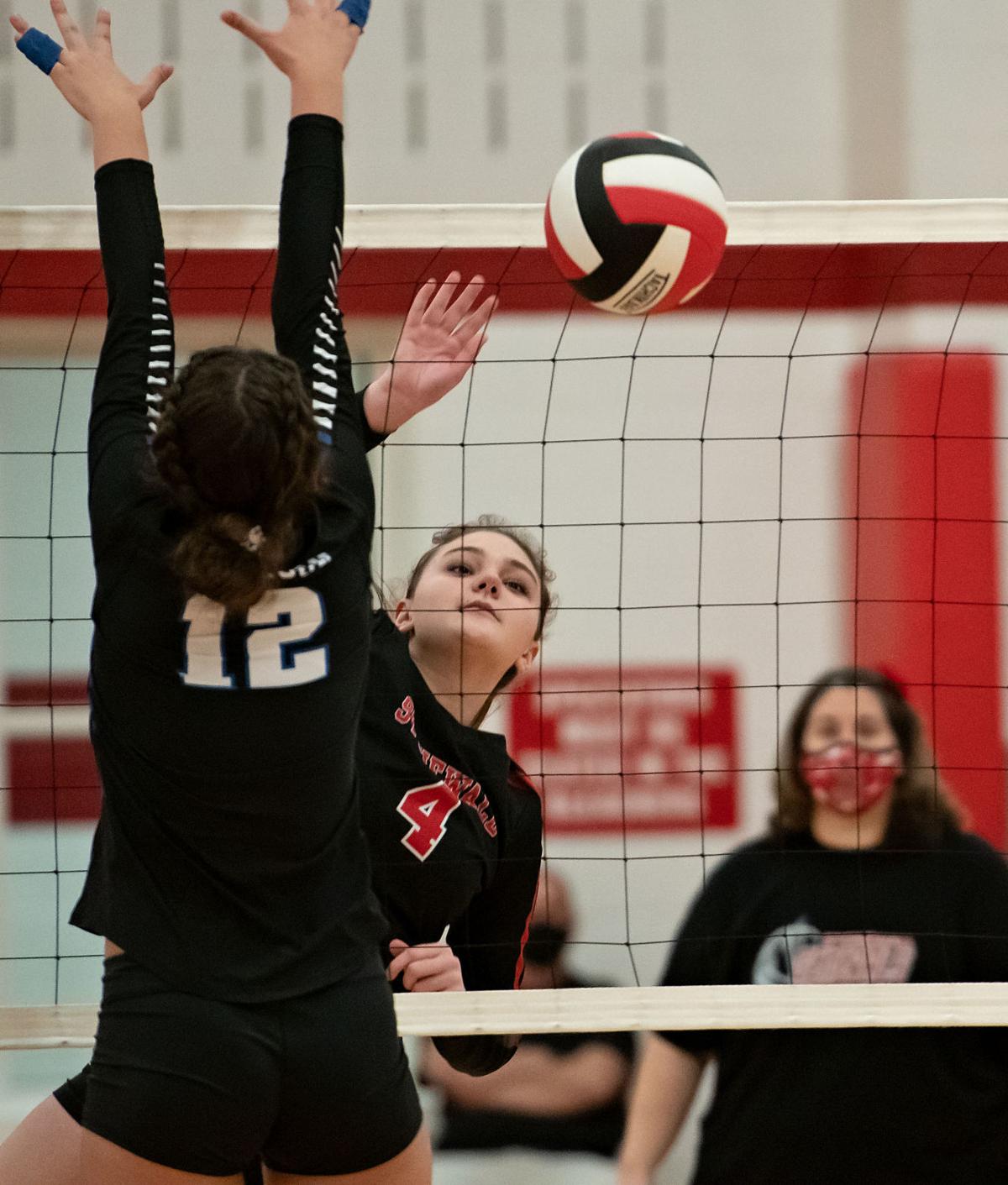 Stonewall’s Lilly Proctor follows through on a kill over Madison’s Ava Jenkins.

Stonewall’s Amelia Hess digs the ball as she comes up with a save near their bench.

Stonewall’s Lilly Blank sends the ball over the net as Kylene Franklin, left, and Alexis Franklin, right, look on.

Stonewall’s Katie Jordan gets on the floor for a save.

Stonewall’s Annika Dellinger digs the ball with her left hand for a save.

Stonewall’s Lilly Proctor follows through on a kill over Madison’s Ava Jenkins.

The Generals (3-7, 3-7 Bull Run) took a quick 11-2 lead and held on to even the match at a set apiece. Stonewall Jackson junior Amelia Hess and sophomore Annika Dellinger had back-to-back kills to end the set.

In the third set, the Generals trailed early but were able to cut the deficit to 17-14. However, the Mountaineers won the final 8 points to take a 2-1 set lead.

The two teams went back and forth throughout the fourth set. With the score tied at 20, Stonewall Jackson senior Lilly Proctor gave the Generals a 21-20 lead with an ace. A kill by Madison County's Sarah Bevins tied it at 21.

The Generals had 11 errors in the fifth set. The score was tied at 2, but Madison County won 4 straight points. The Generals were able to cut the lead to 7-4 on a Madison County but that's as close as they would get. The Mountaineers won the last 6 points of the final set, including two kills by Lizzie Burbridge and an ace by Morgan Cook.

The Wildcats led early in the first set, but Manassas Park rallied to take a 20-18 lead. A kill by Warren County freshman Laney Schenher cut the lead to 20-19. However, back-to-back kills by Manassas Park's Jennifer Segovia and Wendolly Florian De Leon extended the lead to 22-19.

After back-to-back errors by Manassas Park trimmed the lead to 22-21, the Cougars won the final 3 points.

Warren County won 7 straight points, including two kills by sophomore Sara Waller and a kill each by sophomore Faryn Gorham and junior Abigail Dickerson and two aces by sophomore Jamie Kelly. Gorham added two more kills over the final 6 points of the set.

Warren County built a 15-8 lead in both the third and fourth sets and held on for the victory. Dickerson closed the match with two kills over the last five points, including match point.

Strasburg trailed 21-9 in the first set before stringing a few points together. A kill by senior Madyson Judy cut the lead to 21-10. A Strasburg error and a kill by Luray's Brynlee Burrill made it 23-10.

The Rams (1-9, 1-9 Bull Run) won 4 consecutive points, including a kill by junior Kenley Smith and an ace by senior Bella Rhodes to cut the deficit to 23-14. Back-to-back kills by Luray's Averie Alger and Lindsay Bly ended the set.

Slow starts were once again costly for the Rams in the second and third sets. Strasburg trailed 12-3 in the second set. The Rams cut the lead to 12-5, but only scored 4 more points. The Bulldogs (6-3, 6-3 Bull Run) won the last 7 points of the set. The third set was tied at 5, but the Bulldogs won 20 of the next 25 points to seal the win.

The Dragons appeared in control in the third set, but the Falcons staged a big rally. William Monroe led 18-14, but the Falcons won 11 of the final 16 points. Freshmen Peyton DiNardo and Bailey Sheetz started the run for the Falcons with back-to-back kills.

The Dragons (7-4, 7-4 Class 3 Northwestern) held a 20-18 lead but two William Monroe errors tied things up at 20. The two teams traded points until Central won 3 points in a row to seal the set. Toothman had a kill and William Monroe made two errors to end the set.

William Monroe led much of the fourth set, including an 18-11 edge. However, the Falcons responded with a 10-3 spurt to tie the set at 21. An ace by junior Emily Funkhouser gave the Falcons a 22-21 lead, but the Dragons tied it with a kill by Ella Weaver. The two teams traded points and the Dragons took the lead for good at 24-23 on back-to-back kills by Weaver and Mae Hawkins.

DiNardo tied the set at 24 on a kill, but back-to-back kills by Savannah Meade and Hawkins gave the Dragons the set.

Central (8-1, 8-1 Class 3 Northwestern) built an early 7-4 lead in the fifth set, aided by three kills from DiNardo and an ace each from Funkhouser and Toothman. The Dragons rallied with 4 straight points, including two aces by Alexis Clark.

The Falcons were led by Toothman and DiNardo with 11 kills each. Sheetz had 10 kills and Funkhouser had seven. Erika Hutton had 37 assists and 18 digs and Katie Funk had 19 digs and Haven Stevens added 18 digs for the Falcons.

Sherando’s girls won a tri-meet with host Handley and Millbrook led by a balanced running attack.

The Warriors finished with 17 points, while Handley had 38. Millbrook did not have enough runners to qualify for a team score.