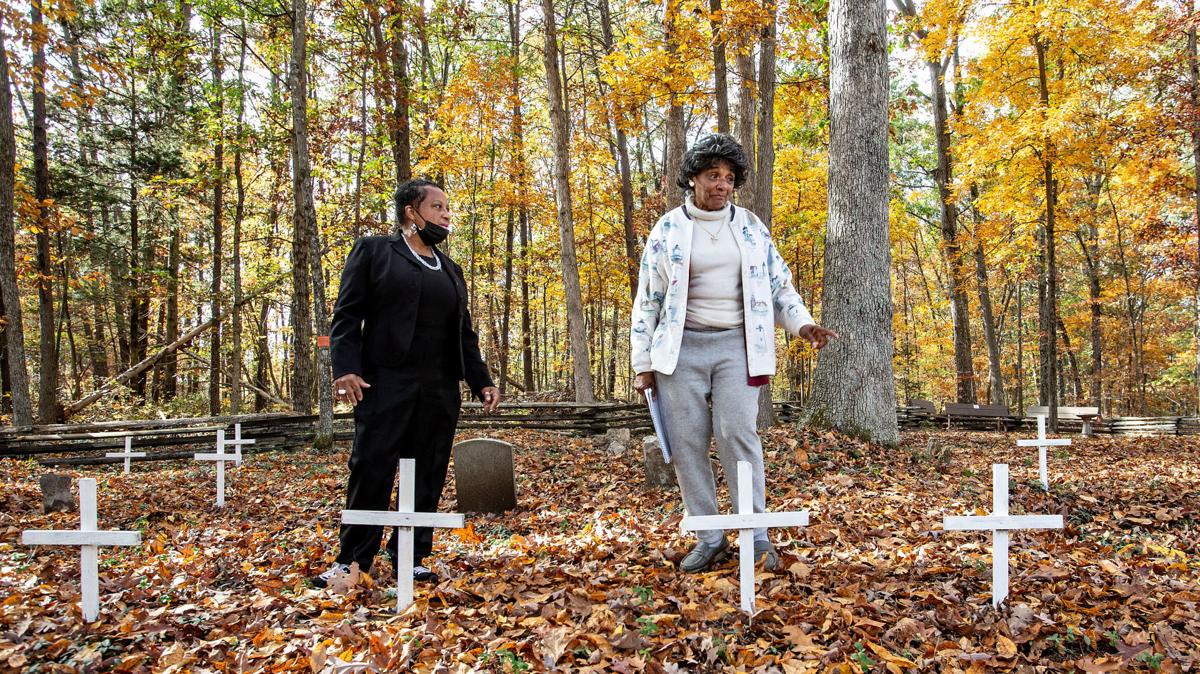 Diane Newman-Frye, left, a Black history advocate, and Ellen Gant, right, a member of the Heritage Society of Middletown, look over the grave markers inside the Henrico Baltimore Cemetery off Reliance Road in Middletown on Monday. 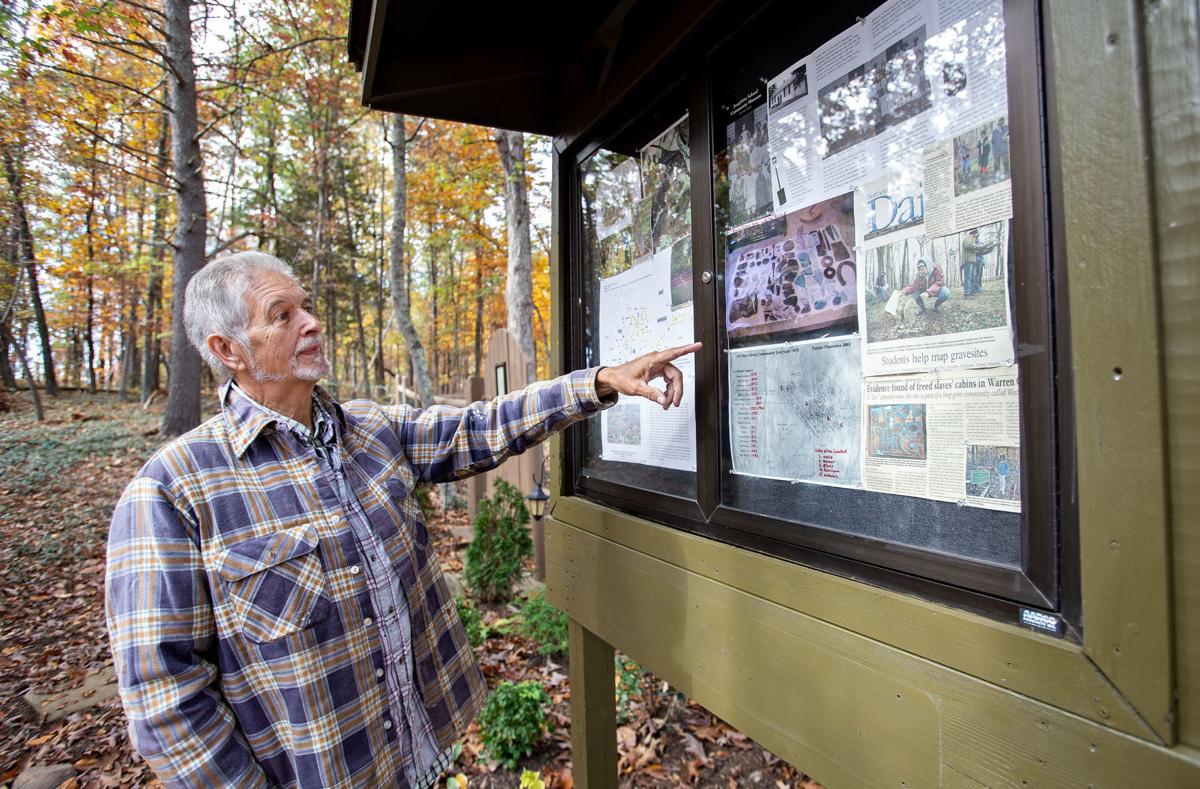 Jeff Taylor of Strasburg stands in front of a refurbished kiosk mounted outside the Henrico Baltimore Cemetery off Reliance Road in Middletown. The kiosk shows the locations of 198 slave graves and lots that were sold.

Diane Newman-Frye, left, a Black history advocate, and Ellen Gant, right, a member of the Heritage Society of Middletown, look over the grave markers inside the Henrico Baltimore Cemetery off Reliance Road in Middletown on Monday.

Jeff Taylor of Strasburg stands in front of a refurbished kiosk mounted outside the Henrico Baltimore Cemetery off Reliance Road in Middletown. The kiosk shows the locations of 198 slave graves and lots that were sold.

FRONT ROYAL -- Jeff Taylor, of Strasburg, has enjoyed finding and searching for artifacts for many years and over the last two-and-a-half years that passion has led him to the Henrico Baltimore Family Cemetery/West Africa Community Graveyard.

The graveyard is located off of Reliance Road in Warren County and while he and Ellen Gant, of the Middletown Historic Society, have done a lot of work, they are aware there is more to be done.

This week the Department of Historic Resources in Richmond began a process to consider making the graveyard officially listed as 'historic.'

"If we can get that, it will be protected and finally be put on the map, because it doesn't exist," Taylor said. "Two years ago, it just didn't exist."

Taylor said that three years ago, his son moved into the area and told him that there had been slave quarters in the area. So Taylor began looking around and found the cemetery. He said he was told that there were a couple gravestones in the cemetery, but when he started looking closely, he realized there were a lot more than a couple.

"I just decided to make it my calling that I want to clean this cemetery up," Taylor said. "These people have been here for 170 years and nobody's been here since. It's been over 100 years since the last people were buried here in the community. I want to clean it up, give it some respect, find out who these people are and let them know they're not forgotten."

Taylor has found 198 graves since he started the project, which he calls "The Genesis Project."

In the last year, they have added a fence around the graveyard and a kiosk, both of which were donated by Sherando Park.

The kiosk shows, among other things, the locations of the 198 graves and lots that were sold.

Taylor said he wants to do more research this winter on the families who lived in the community.

He said he also is working on two other projects, a graveyard at Mt. Zion Cemetery in Middletown and the Georgetown Cemetery in Mount Jackson.

Taylor said they found 12 graves at the cemetery in Mount Jackson and they will be working on doing more research and finding out more about that community.

Taylor said he also has two more projects in the wings that he's just starting to work on, but couldn't talk about yet.

Taylor said he couldn't have done a lot of what he's done without the help and support of a lot of people. He said that Donna Lleywelleyn, who is the manager of the 7-11 in Middletown, has been a big help.

"Donna has been real supportive over the last year or so," Taylor said. "Letting us use her store to do some fundraising, little things like bake sales or flower sales, donation jars. She's just been really very supportive and caring about the project. She wants to get more people involved, too. She's into it. She's been great."

Taylor said that Bob Llewellyn has also been a big help. He said that Llewellyn is the head of the local Homeowners Association.

Taylor also said Vicki Newlin from Shenandoah Sand Inc., located in Winchester, has also been a major supporter. He said they donated some dirt for the driveway to the Baltimore cemetery and some mulch for a garden area they plan to put in next spring.

Taylor said he would love to see more community involvement. Earlier this week, Middletown Town Council candidate Dr. Diane Newman-Frye drove out to the Baltimore cemetery and Taylor showed her his progress. Newman-Frye said she would like to promote more black history in the area.

"We all need to know about our roots and where we come from, the origination, the main arches of the family," Newman-Frye said.

Gant said that Taylor has put in a lot of work and she respects what he's done for the project.

"There has been a lot of barriers that Mr. Taylor has gone through, a lot of fences that he's had to hurdle," Gant said. "Not to mention penetrating walls of ugliness. I just personally feel, I admire him tremendously for what he's done here. Its not been easy. I'd like to see, I wish something better would come. I'd love to see it become a historical site, and maybe some organization will come on board to help maintain it. But that's what I'd like to see come out of it."