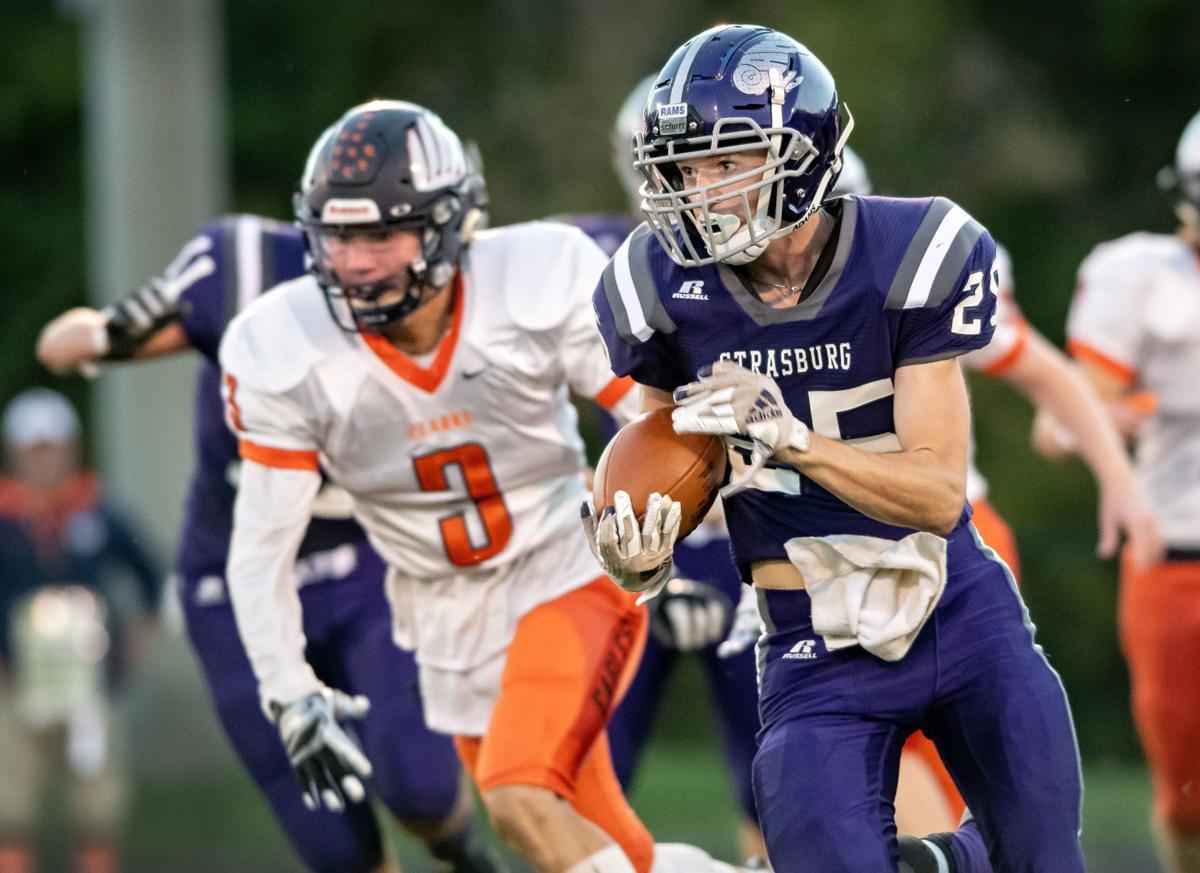 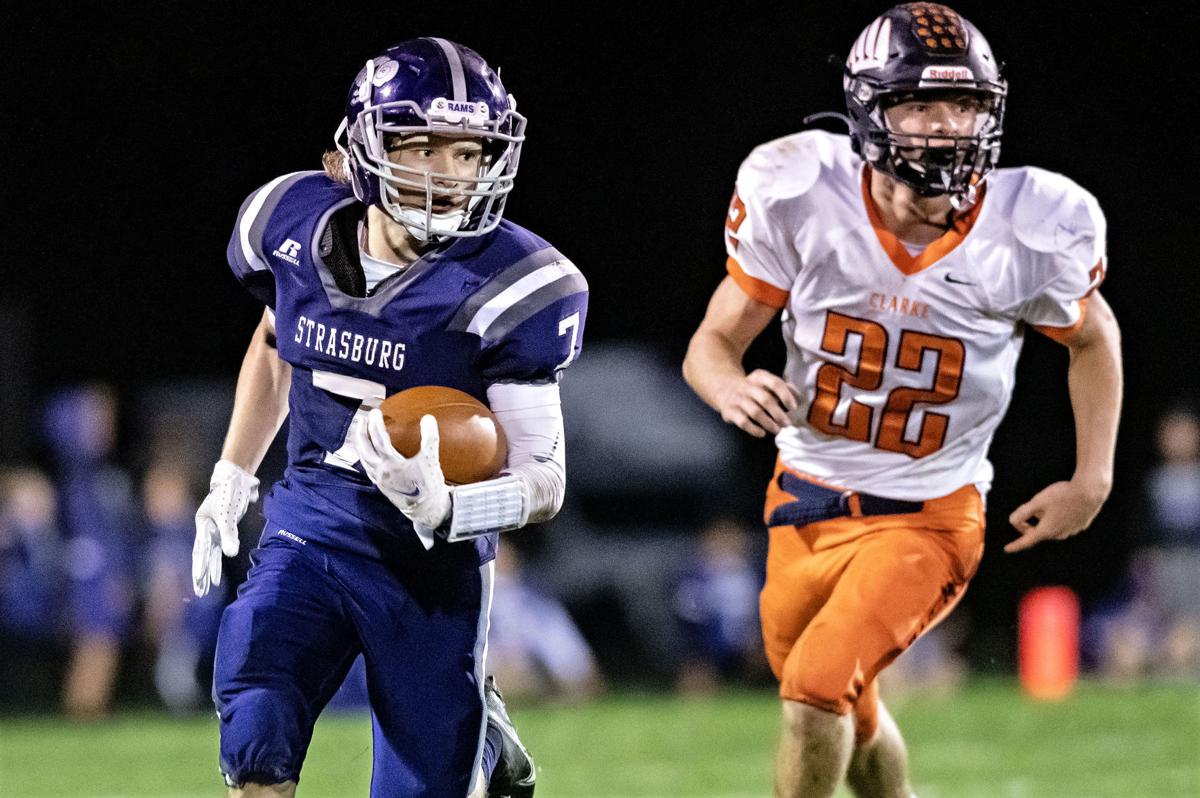 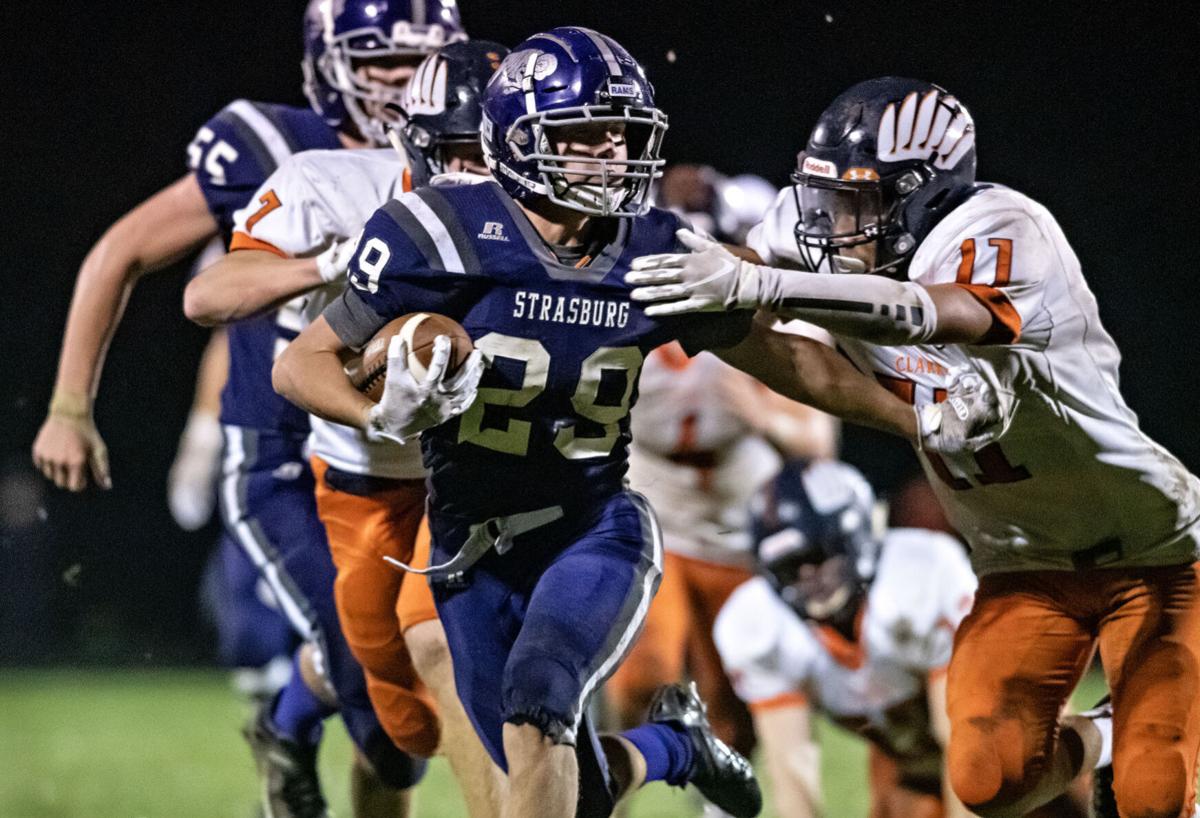 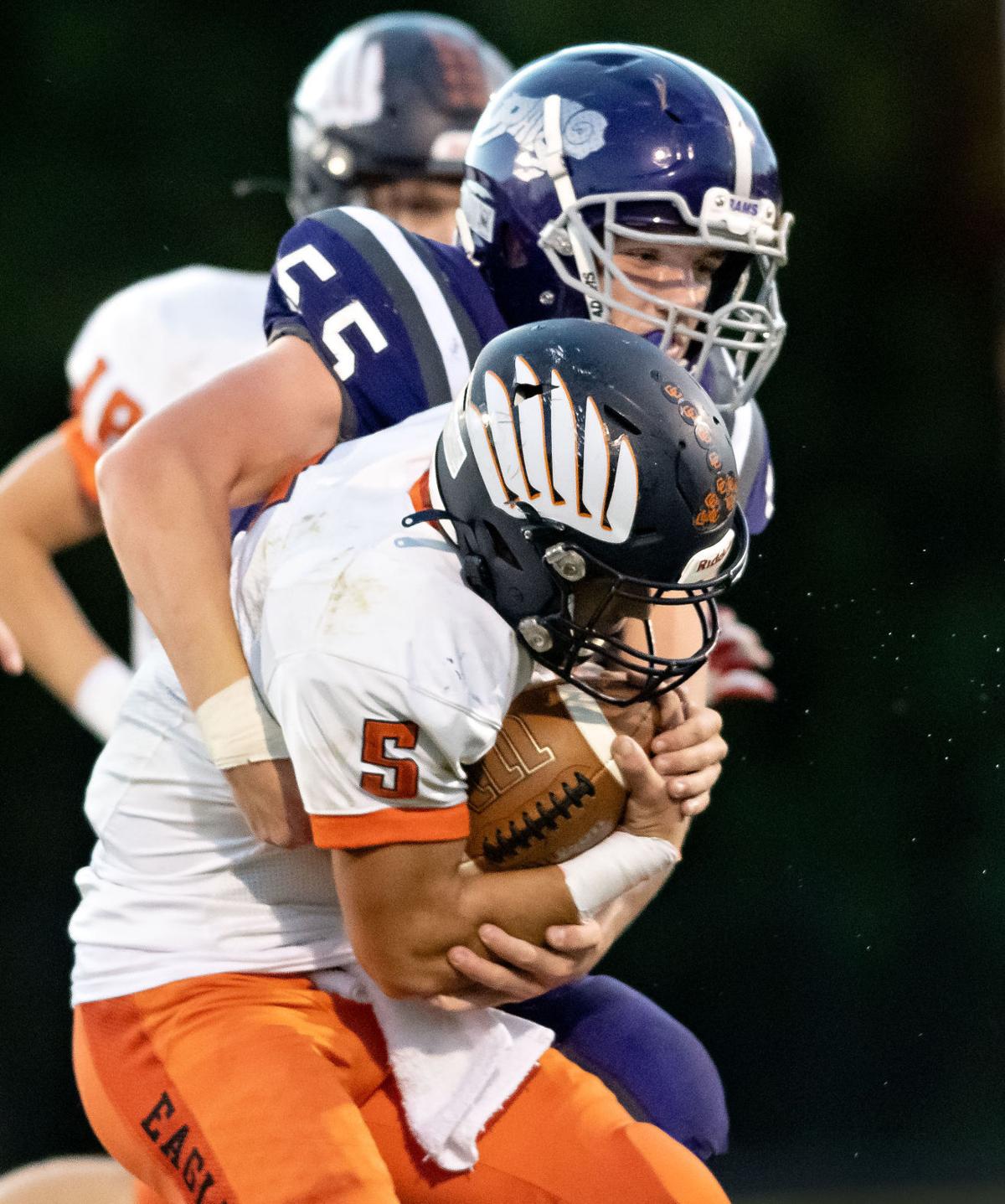 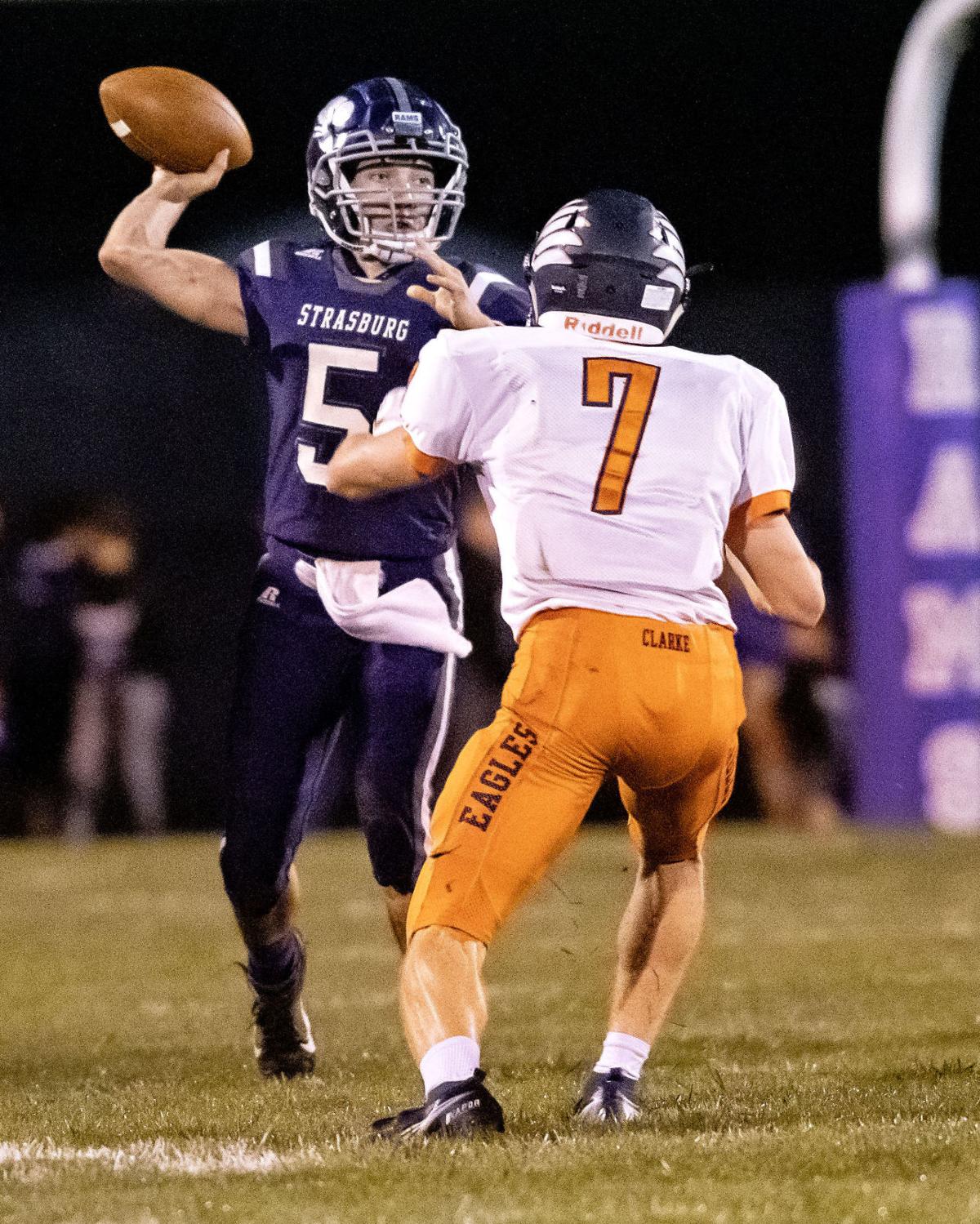 Strasburg quarterback Ryan Roller drops back to pass as Clarke County’s Edward Booker puts on pressure during second half action on Sept. 24. The Rams host Manassas Park on Monday.

Strasburg quarterback Ryan Roller drops back to pass as Clarke County’s Edward Booker puts on pressure during second half action on Sept. 24. The Rams host Manassas Park on Monday.

The Rams lost momentum in the second quarter and couldn't get it back in a 22-12 loss to Clarke County in Bull Run District football action. Both teams entered the game undefeated at 3-0.

"Our kids played hard," Strasburg head coach Mark Roller said. "It was a physical game. They played well. And I think you got to play well in all facets of the game and we didn't do that tonight."

Early on it looked as if a special teams miscue would be costly for the Rams, as a muffed punt gave the Eagles the ball at the Strasburg 24.

However, on the next play, Strasburg recovered a Clarke County fumble and the Rams took advantage.

Strasburg senior running back Brady Neary ran 63 yards to the Clarke County 6. Two plays later, junior quarterback Ryan Roller scored on a 6-yard run for a 6-0 lead with 8:50 left in the opening quarter.

"We started out well," Mark Roller said. "That was a bright spot."

The Rams (3-1, 0-1 Bull Run) were able to force a Clarke County punt for the second straight series to start the game.

On third-and-9 from the Strasburg 48, Ryan Roller connected with Griffin Carter for a 45-yard pass play to the Clarke County 7.

The Rams were unable to score as the Eagles stopped Strasburg on three straight running plays. On fourth-and-goal from the Clarke 3, Ryan Roller attempted pass to a wide-open Neary that went over Neary's head and fell to the ground with 1:03 left in the opening quarter.

"When you play good teams you got to be able to score," Mark Roller said. "And certainly they are a good team. And we just didn't do it, and their defense did a good job."

The Eagles (4-0, 2-0 Bull Run) responded with a 97-yard drive on 12 plays. Clarke County junior Kyler Darlington capped the drive off with an 8-yard touchdown run to tie the game at 6-6 with 6:06 left in the first half.

"That kind of took a little wind out of us," Mark Roller said. "We got tired right there."

Strasburg was forced to punt on its next series, but Neary couldn't handle the snap and bobbled the ball. Darlington was able to pick it up and ran 35 yards for the touchdown and a 12-6 lead with 4:01 left in the second quarter.

"I think someone tried to pick it up and they bobbled it and I was right there, right place right time," Darlington said. "I picked it up, turned around and ran. I had a blocker in front of me. I was able to run around and I beat the last defender to the end zone. I think that got us going, got me going. I think that put us in a good spot for the whole game."

Mark Roller said he felt like that was another play that turned the tide of the game.

The Eagles added a 24-yard field goal by Christopher LeBlanc in the final seconds of the half for a 15-6 edge. The Eagles went 42 yards on nine plays to set up the field goal.

After forcing a punt to start the second half, the Eagles quickly extended the lead. Clarke County went 44 yards on just two plays ,with Darlington scoring on a 12-yard touchdown run for a 22-6 lead with 8:45 left in the third quarter.

Strasburg put together a solid drive on its next possession. The Rams went 80 yards on 15 plays. Strasburg senior Griffin Turpen scored on a 6-yard run with 11:53 left in the game to cut the lead to 22-12. Strasburg's 2-point conversion was intercepted in the end zone.

Neary ran for 92 yards on 11 carries for the Rams. Ryan Roller threw for 70 yards on 3-of-7 passing, and Carter finished with two receptions for 62 yards for Strasburg.

The Rams play at East Rockingham next week. Mark Roller said he told his team that they have to keep their heads up and bounce back.