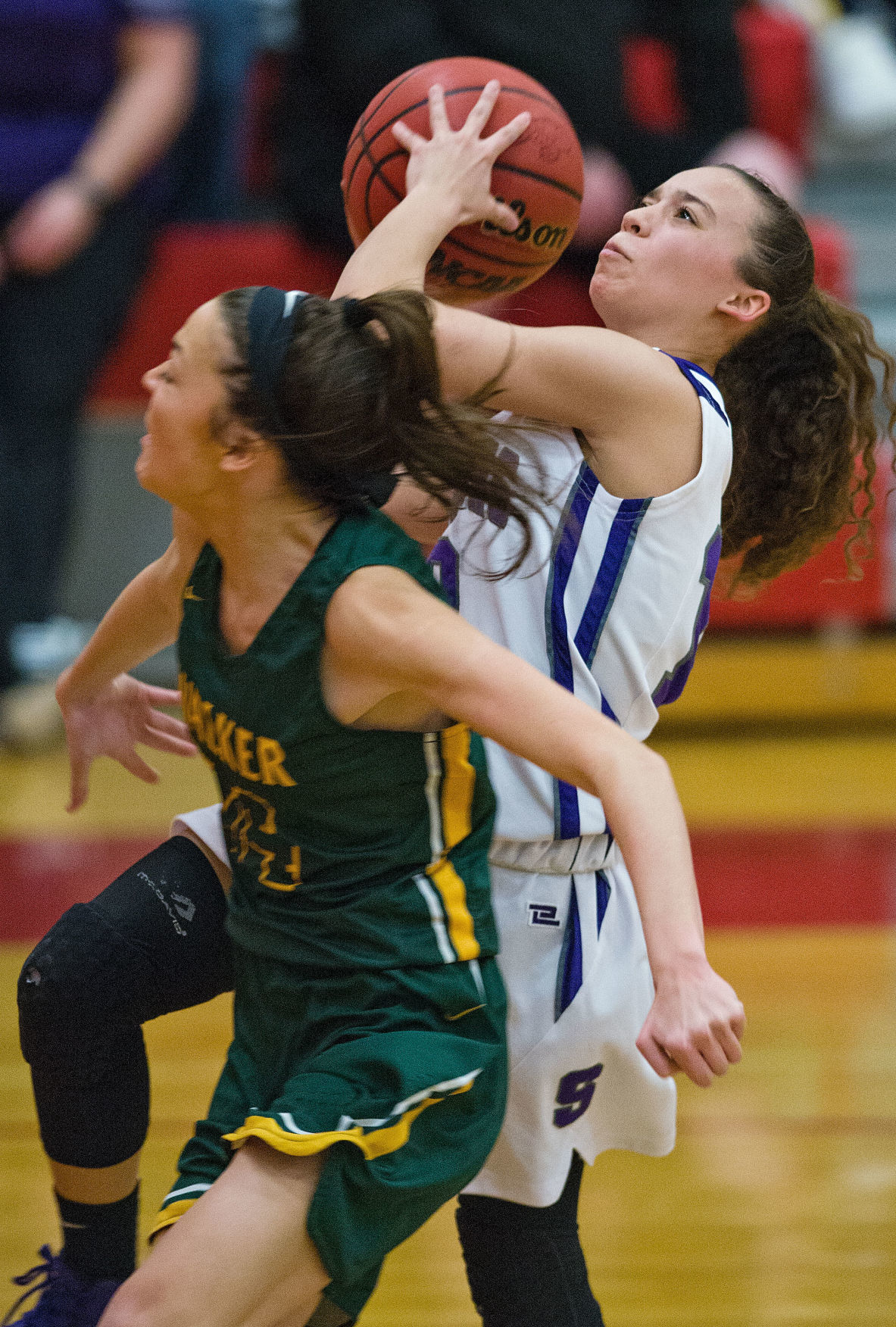 Strasburg's Nyla Sperry drives to the basket as Maggie Walker's Emma Ragone defends during the Class 2 state quarterfinal last season in Quicksburg. The Rams return most of their squad from last year's state quarterfinal squad. They open at Warren County on Tuesday. 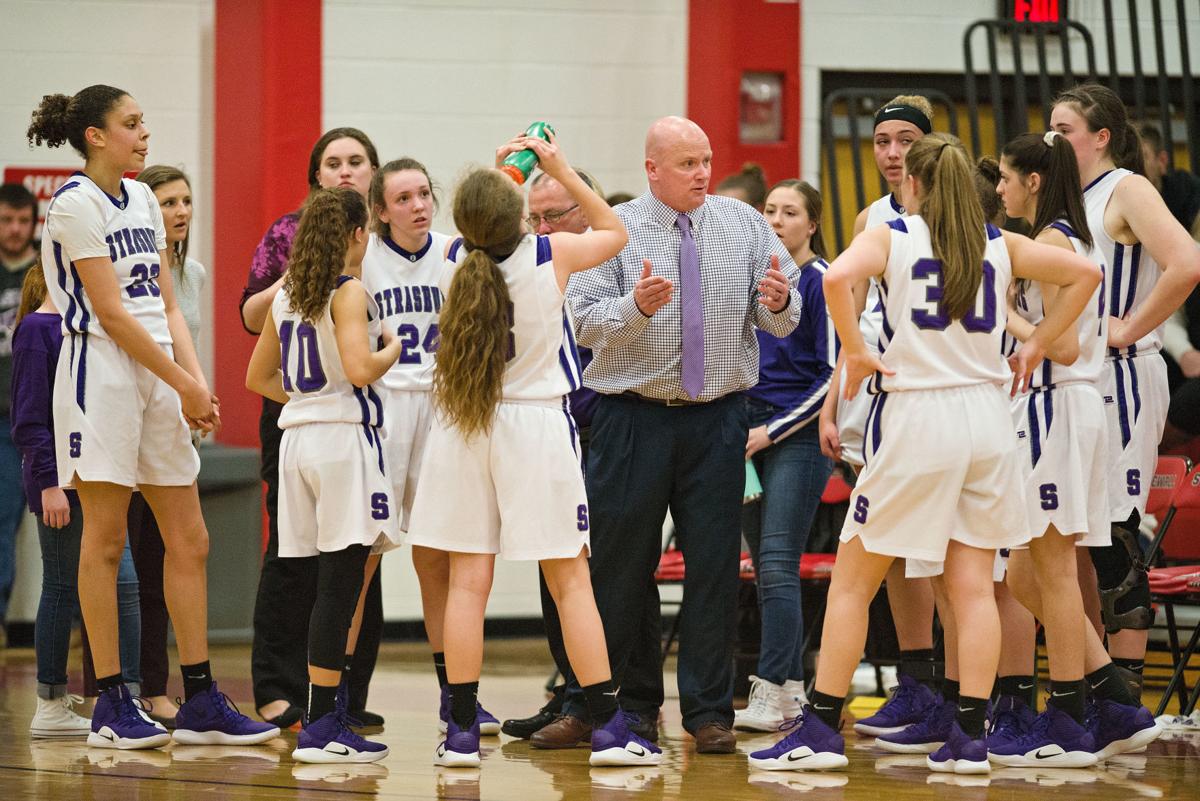 Strasburg coach Darin Jenkins talks to his girls during the final minutes of the Class 2 state quarterfinal last season in Quicksburg. The Rams are hoping to make a return appearance to the state tournament this season with the bulk of their squad coming back.

Strasburg's Nyla Sperry drives to the basket as Maggie Walker's Emma Ragone defends during the Class 2 state quarterfinal last season in Quicksburg. The Rams return most of their squad from last year's state quarterfinal squad. They open at Warren County on Tuesday.

Strasburg coach Darin Jenkins talks to his girls during the final minutes of the Class 2 state quarterfinal last season in Quicksburg. The Rams are hoping to make a return appearance to the state tournament this season with the bulk of their squad coming back.

After winning the Bull Run District and Region 2B tournament titles last year and advancing to the Class 2 state tournament, Strasburg’s girls basketball squad is the team everyone in the region wants to beat.

The Rams have most of their team back from last year, but Strasburg girls basketball coach Darin Jenkins said he knows it won’t be easy -- even in the Bull Run District. Page County, also a state quarterfinalist last year, East Rockingham, Luray and Stonewall Jackson have all joined the district this season.

“I’ve preached from day 1 this year I think the bulls-eye is a little bit on our backs and everybody is sort of looking for us and wants a shot at us,” Jenkins said last week. “The competition is definitely going to be tougher this year with adding those teams. But I think we’re in for a good season of basketball, and I think every night I think it’s going to be competitive.”

Strasburg lost in the state quarterfinals to Maggie Walker after going on an impressive run at the end of last season. The Rams finished third in the Bull Run District, but used an 11-game winning streak to win the district and region tourney titles with a young squad.

Jenkins said he hopes that the Rams’ postseason success last year will help them this year.

“We got on a little roll last year, obviously, and was able to ride that momentum,” Jenkins said. “I think we got to the place that we dreamed about getting to, and I think it showed us all that we were able to do that. I think now coming back this year, I think we all realize that it’s not going to be easy. It’s probably going to be harder this year than it was last year -- it takes work.”

Strasburg 6-foot-3 senior Jaden Alsberry said that the team is excited for this season and for the challenge of getting every team’s best shot.

“I think there’s definitely pressure on us, that every team wants to beat us,” Alsberry said. “So we have to make sure we give 100 percent every practice and every game. We just have to keep the right mindset and just play good under pressure.”

Sperry said having a year under her belt has made her comfortable in her role this season.

“Playing last year on varsity, I know how it goes, how fast the game is,” Sperry said. “I think this year’s going to be a lot easier, knowing my competition.”

The Rams lost only two players to graduation but they’ve added a key player back to the team. Strasburg senior guard Maddie Smallwood missed all of last season due to a torn knee ligament. Smallwood was a big part of Strasburg’s success her freshman and sophomore seasons as the team’s point guard.

“Having Maddie Smallwood back, I think we’re much-improved this year in our guard play,” Jenkins said.

Sophomore guard Madi Stinnette also saw plenty of playing time last year and Jenkins said that experience should help her this season as well. Jenkins said he believes his team is more balanced this season, offensively, than it has been in years past.

“We have good guard play, we have height on the inside,” Jenkins said. “ And I tell you the rest of them -- we’re so balanced. We’ve got girls that go in in different spots and there’s no drop off. It’s going to basically come down to who’s got the hot hand on what night.”

The Rams, who have five seniors on this year's squad, play at Warren County on Tuesday in the season opener for both teams.

Jenkins said he’s been pleased with how focused his team has been in the preseason and he thinks part of it is because they understand the opportunity they have in front of them.

“It just feels different this year than it has any other year,” he said. “I think it’s mainly because we got (to the state tourney last year) and we want to try to get back there again. For (the seniors) it’s their last opportunity.”