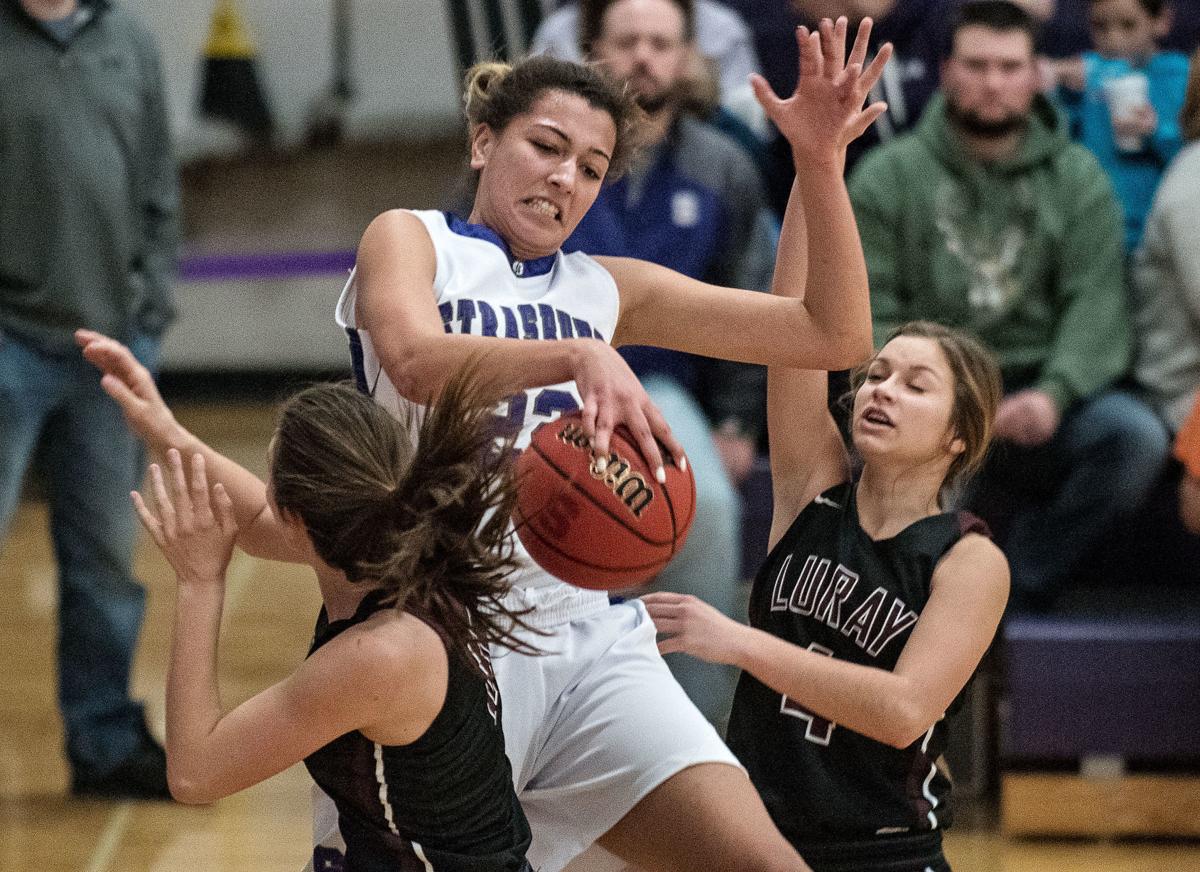 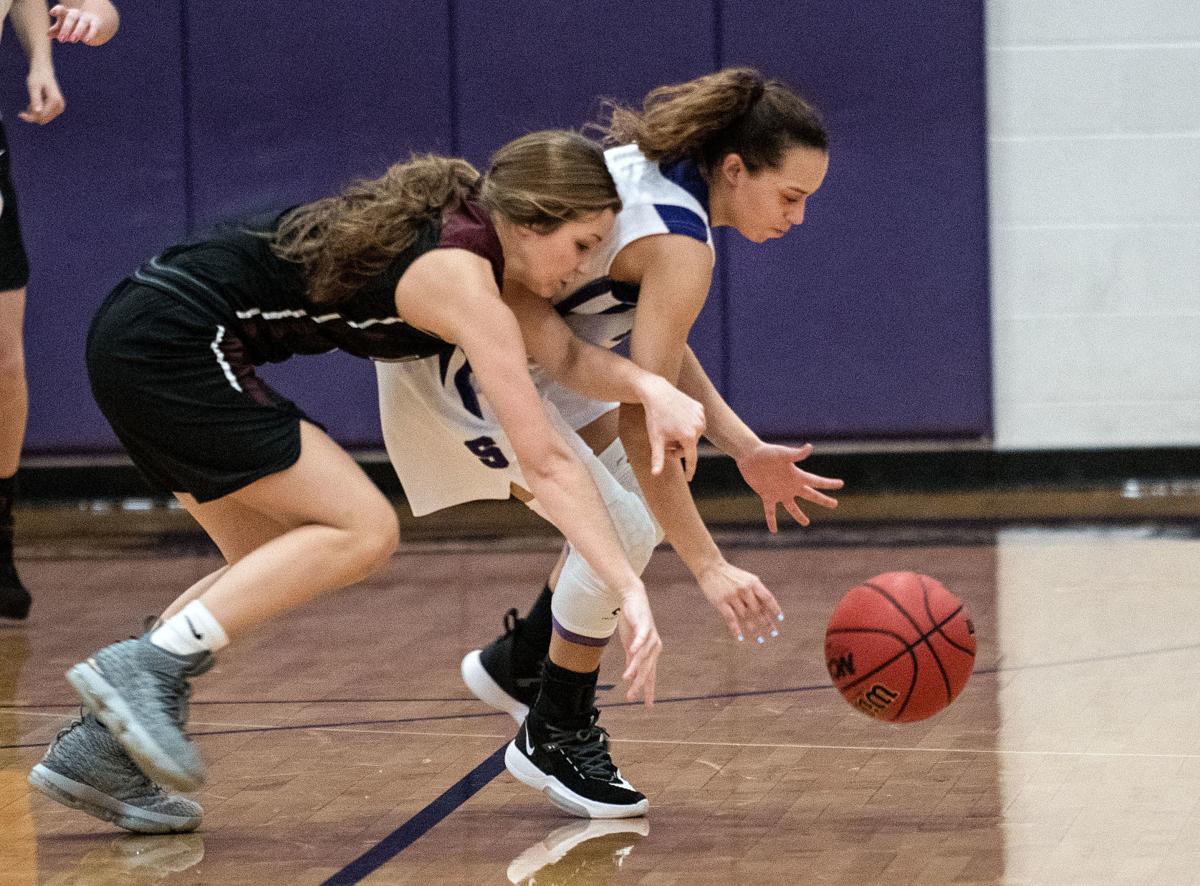 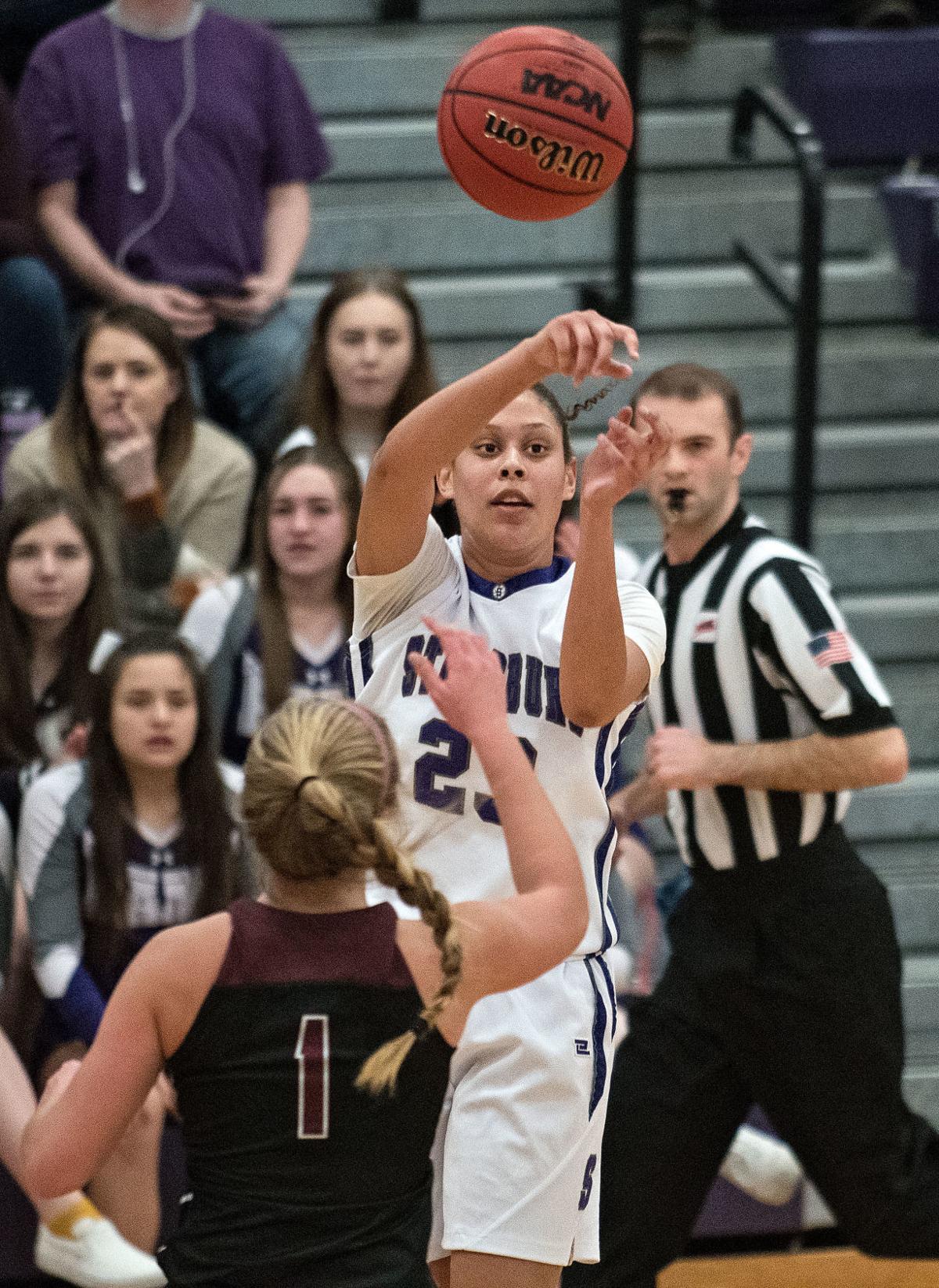 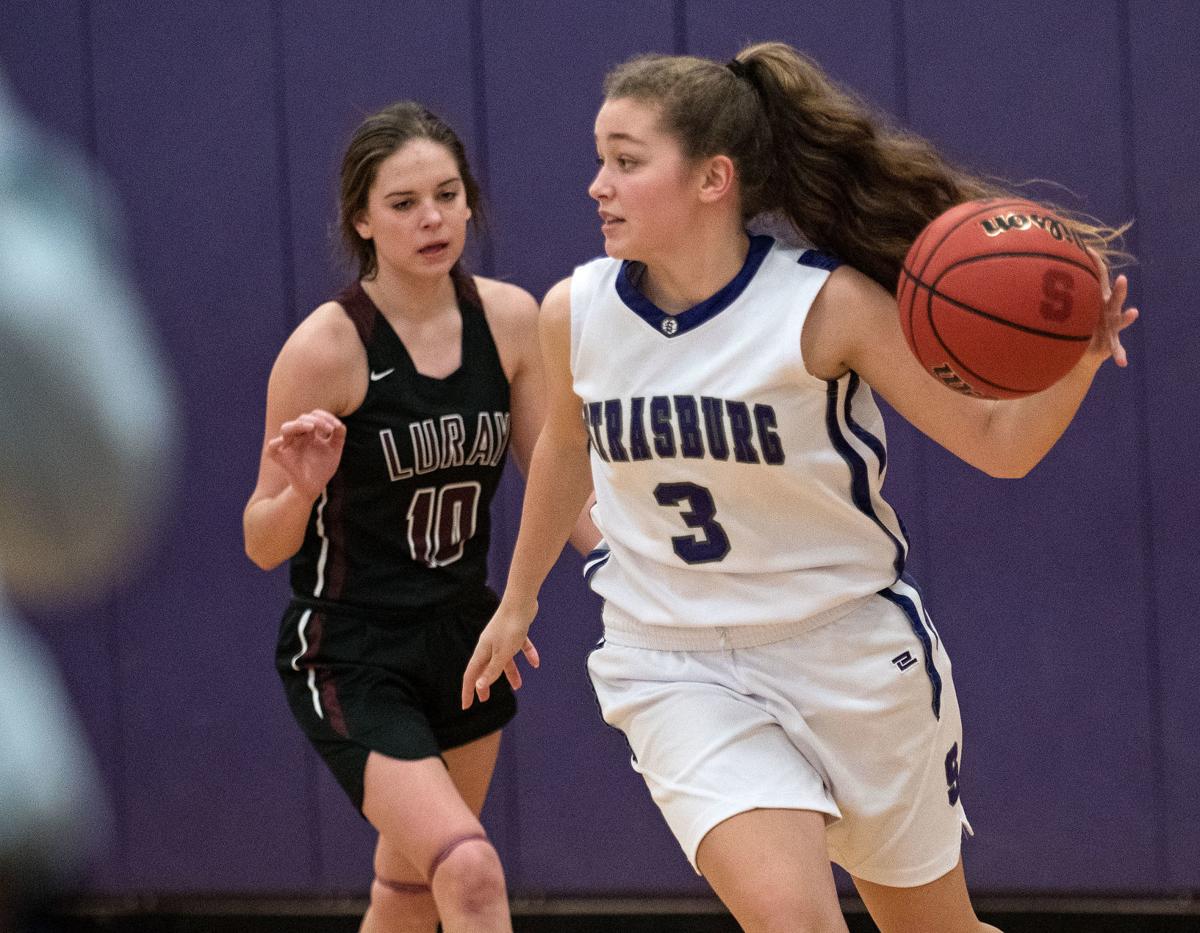 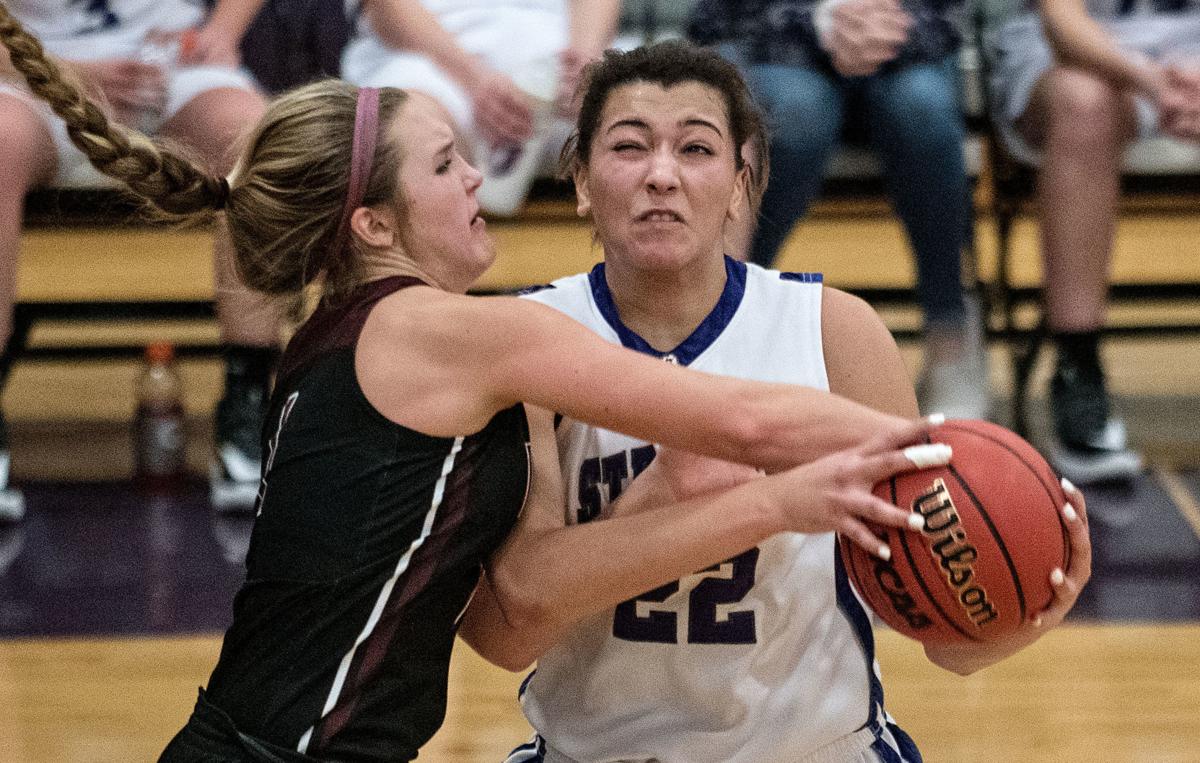 STRASBURG -- Although Strasburg’s girls basketball team returned most of its major pieces from last year’s state quarterfinal squad, Luray’s unblemished start to the 2019-20 season left some uncertainty as to who is the team to beat in the Bull Run District this season. The Rams answered that question on Friday night.

A pair of 10-0 teams clashed when the Rams and Luray squared off in Strasburg, and the Rams -- last season’s Bull Run District tournament and Region 2B tournament champs -- seized early control of the district race with a 53-44 win over the Bulldogs.

Given their success a year ago, the Rams hardly snuck up on anybody through the first half of the season this winter, but Friday’s victory sent a clear message that the path to the Bull Run District crown runs through Strasburg.

“I think there definitely was a target already,” Rams head coach Darin Jenkins said after his team’s win Friday night, which it followed with a 40-38 win over Moorefield (West Virginia) on Saturday to improve to 12-0. “I think it just got a lot bigger.”

As good as Strasburg’s record is, it desperately needed a win like the one it got against Luray. While the Rams were winning games, they didn’t feel that they looked good doing it, and a team meeting after winning the Ram Hardwood Classic at the end of December revealed that perhaps Strasburg was putting too much pressure on itself amid a set of very high expectations.

“At the beginning of the season we were feeling very pressured by, I think, our fans and the coaches in general,” Rams senior guard Karly Colcombe said, “but we had a talk afterwards and after that it kind of calmed down. We went into this just playing to play and have fun. That definitely helped.”

Strasburg won its next two games after the Ram Hardwood Class by 32 and 23 points, but Jenkins said he was still starting to worry about his team’s confidence level before it handed Luray it’s first loss of the season.

The victory served as an affirmation of sorts for the Rams, who knocked off a team that very well could be a top contender in the Region 2B tournament.

“Obviously we’re gonna see them at least one more time but I have a feeling we’ll see them more than that,” said Jenkins, whose team travels to Luray for a rematch on Feb. 4. “I think what it does for us, it gives us a little bit of confidence. I think we were lacking some of that throughout the year and we needed a big win. I think this was definitely that.”

The Rams (11-0, 4-0 Bull Run) should get an even bigger boost in that they looked good in knocking off the Bulldogs (10-1, 4-1). Jenkins said Friday night’s performance was the best Strasburg has looked in terms of the support the players showed for one another and that the Rams executed the game plan as it was drawn up, adding that it was a game in which “everything just seemed to flow for us.”

Strasburg’s offense, led by 19 points from 6-foot-4 senior forward Christyan Reid and 15 from sophomore point guard Nyla Sperry, was dysfunctional early against Luray’s revolving door of defensive sets but found a rhythm in the second half. Strasburg’s defense, however, was there throughout, and no Ram made a bigger impact on that end than Colcombe.

Colcombe, who emerged as a defensive specialist during last season’s run, was tasked with shadowing Luray’s Emilee Weakley on Friday night and held the sophomore to one of her lowest scoring outputs of the season. Weakley, who entered the game averaging 29.9 points per contest, had 16 points against the Rams, five of which came while Colcombe was on the bench catching a breather in the second quarter.

Not known as a scorer, Colcombe added 10 points in the win and calmly sank a pair of free throws to set the final margin and put the game away with 16.3 seconds left.

“She got a little frustrated (earlier in the season) because she wasn’t getting the minutes she thought she was supposed to get, and I kept telling her ‘Karly, your minutes are coming with playing teams like this. You know what you do well for us, we’re gonna need you do that for us.’ She did it,” Jenkins said. “She scored 10 points, she hit some big shots, she hit some big free throws down the stretch and I thought what she did with Weakley was remarkable.”

Colcombe spent the entire game following Weakley all over the court, eschewing help-side defense in order to remain right in Weakley’s face.

“Karly is perfect for that because she’ll get in there and battle with you,” Jenkins said. “She’s physical. She has a good sense of denying. She does a good job of boxing out. Hats off to her, she was huge for us.”

Colcombe, who was relieved a couple times by sophomore Madi Stinnette, and only for short spurts, held Weakley scoreless in the fourth period. It was part of a collective championship-caliber quarter for Strasburg, which held Luray to 1-for-17 from the field and outscored the Bulldogs 15-4 in the final frame after entering the fourth period trailing 40-38.

“We’re gonna need quarters like that all the way through,” Jenkins said. “This thing’s not over. We’ve got tough games ahead of us and there’s a long way to go. But I think again, what it does is it gives the girls a huge boost of confidence.”