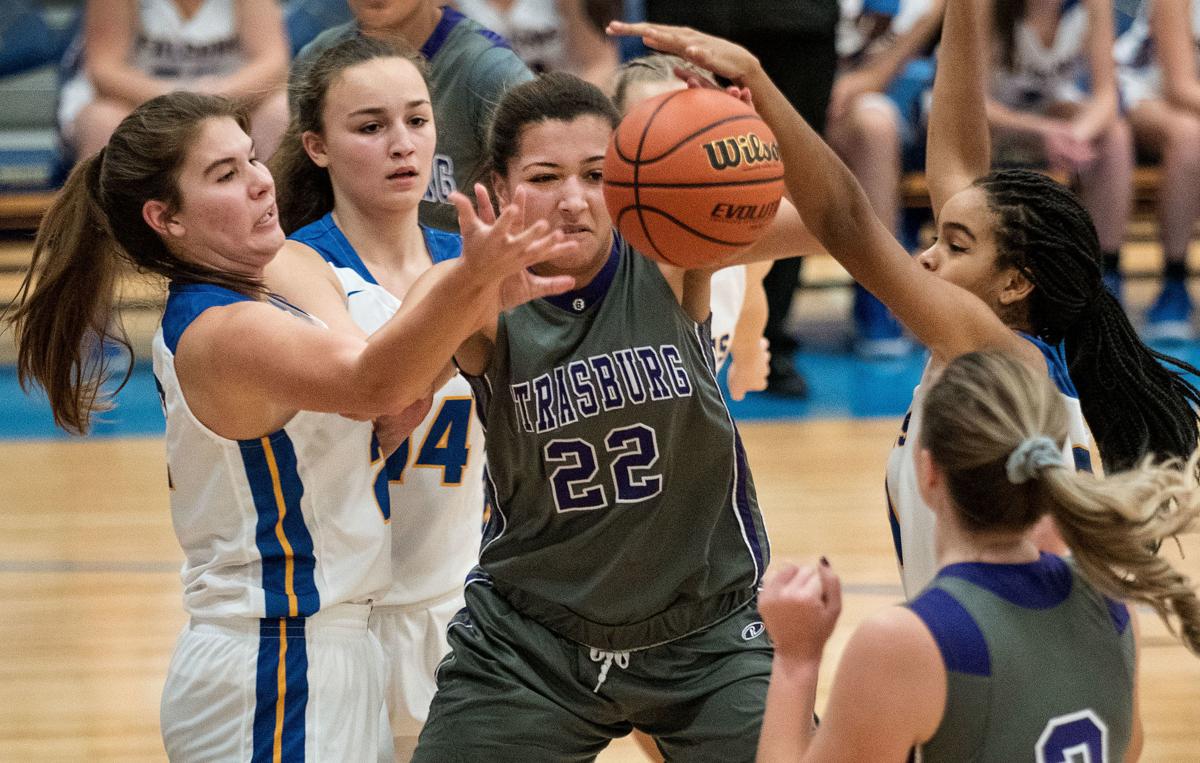 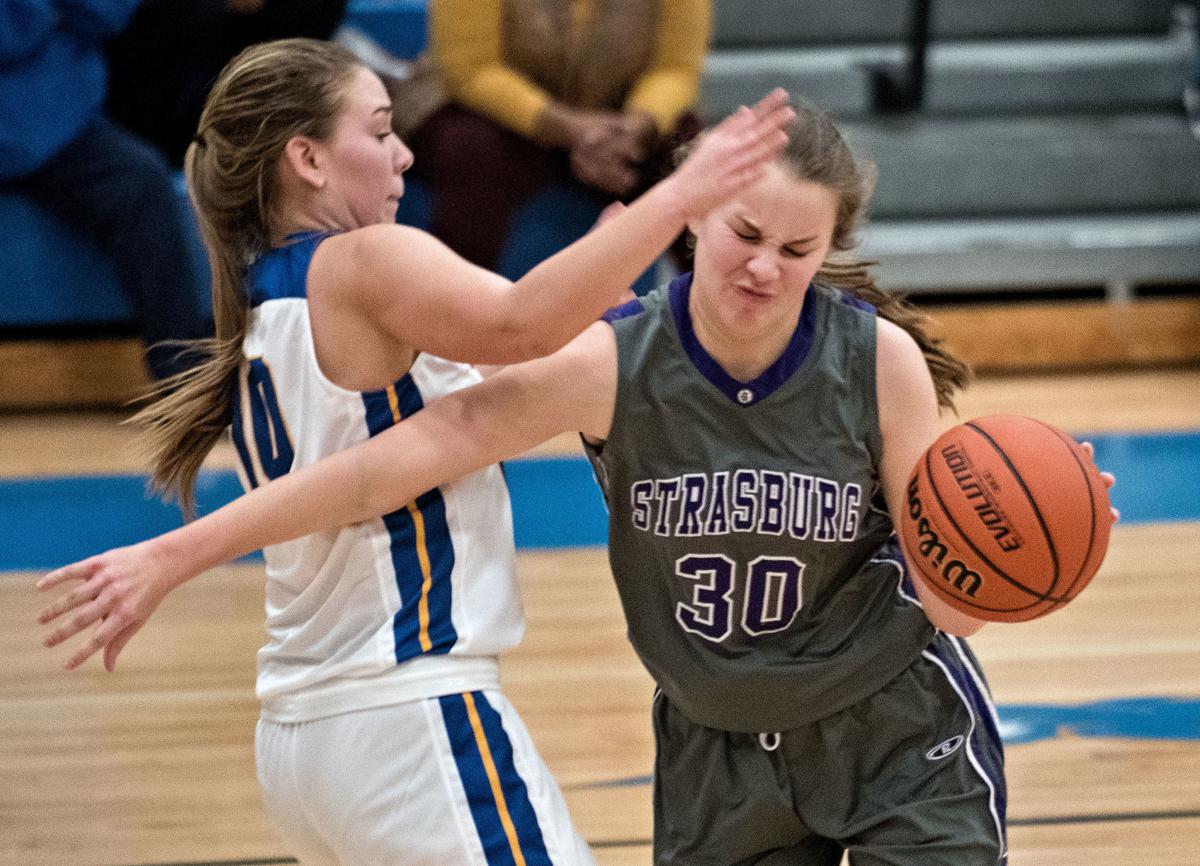 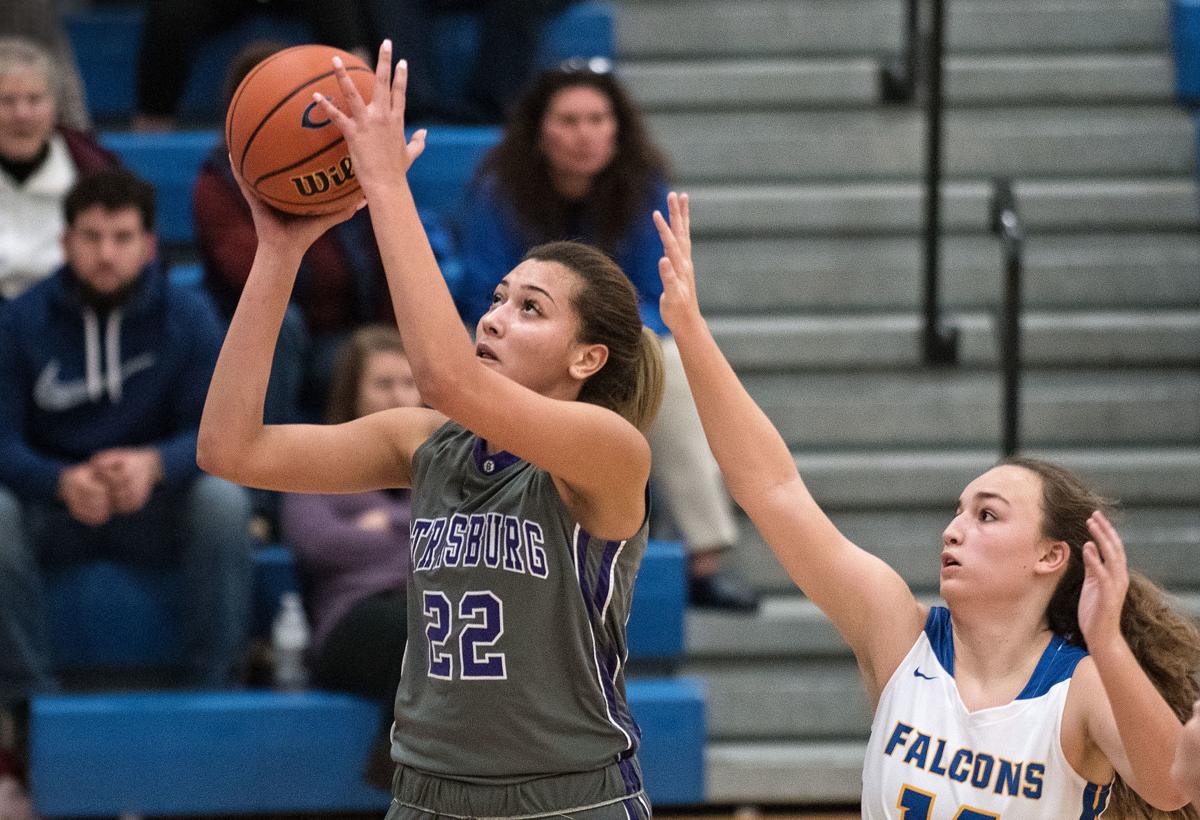 Strasburg’s Christyan Reid goes up for a shot as Central’s Ella Toothman defends in a game earlier this season. Strasburg is one of three local teams playing in the Ram Hardwood Classic starting today.

Strasburg’s Christyan Reid goes up for a shot as Central’s Ella Toothman defends in a game earlier this season. Strasburg is one of three local teams playing in the Ram Hardwood Classic starting today.

WOODSTOCK – Strasburg’s girls basketball team is 2-0 after the first week of the season, but the Rams know they have a ways to go if they hope to make a return trip to the Class 2 state tournament this winter.

The Rams, who returned nearly their entire squad from last year’s team that dropped a heartbreaker to Maggie Walker Governor’s School in the state quarterfinals, haven’t quite looked ready for another playoff run in the early going of the 2019-20 season.

Strasburg opened the season on Tuesday with a 56-30 win over a Warren County team that won just two games last year, and followed that up with a 48-33 victory over county rival Central on Thursday in a performance that left head coach Darin Jenkins saying that he wasn’t pleased with “what it looked like out there” on the court.

“We’ve got two games under our belt and we haven’t played extremely well in either one of them, so we’ve got work to do,” Jenkins said after Thursday’s win. “We’ll just keep at it.”

Strasburg was never really threatened on Thursday night, and after gradually building a 13-1 lead in the first quarter, the Rams never led by fewer than 8 points, a margin that felt even larger given Central’s offensive struggles.

But Strasburg, playing its second straight road game to start the season, wasn’t sharp against the Falcons, and the game was probably closer than it should’ve been as the Rams shot just 34.6 percent from the floor and repeatedly failed to convert what should’ve been high-percentage looks in the paint against a team that could not match up physically with Strasburg seniors Christyan Reid (6-foot-4) and Jaden Alsberry (6-foot-3).

“First off, give them credit for their defense. They played good defense on us, so I’m not discrediting anything they did out there,” Jenkins said. “But I told the girls, we cannot be happy. If anybody in that locker room’s happy with what the performance looked like tonight, we’re in trouble. We can’t be happy with the way it looked. We left way too many shots out there underneath the basket that we missed. I don’t know what the number would be, I’ll have to go back and look at the film, but I would say probably 10 or 14 points out there just on missed shots underneath the basket. You hope to get that cleaned up.”

That’s what the first two weeks of the season will be about for the Rams: working out whatever kinks they have before beginning Bull Run District play with a game against Clarke County on Dec. 18. Before that contest, Strasburg will again play Warren County and Central next week.

“I think now that we know what we need to work on,” Rams sophomore point guard Nyla Sperry said, “we’ll go into this week of practice, work on that and come back out next week stronger and hopefully it’ll look a lot better, cleaner.”

“We definitely need to pick it up,” Reid, who came alive on the boards late with eight rebounds in the fourth quarter against Central and ended up with a double-double with 20 points and 11 rebounds, added. “We do have a lot of stuff we need to fix, but we are doing well. I feel like we just need to work together more and we should be fine.”

Part of the reason behind the non-dominant nature of Strasburg’s first two wins could be Jenkins’ emphasis on getting some early playing time for his less-experienced players. On Thursday, with his team already up 12 points late in the first quarter, Jenkins took Alsberry and Reid off the floor to give some other girls a taste of meaningful minutes.

“One of the things that I learned from last year with getting to that last game against Maggie Walker was that you’ve got to have people on the bench that’s prepared to play,” Jenkins said. “And I think the other night (against Warren County) was a chance to get some girls in there that normally don’t play a whole lot, to get some minutes. Tonight, I thought we got some girls in there that were able to get minutes. My thought is if we’re able to keep doing that here and there, down the road it will pay off because they’ll have some games where they got some experience.”

Strasburg has played two offensively challenged teams to start the season, but the Rams’ defense looked on Thursday like it could be a strength this season. The Rams need to cut back on the fouls – those piled up in the first half, and Strasburg was fortunate the Falcons made just 9 of 23 free throws on Thursday – but they showed great on-ball pressure in stretches against Central and should be able to limit opposing teams’ interior looks with Alsberry and Reid protecting the paint.

Strasburg, which hounded the Falcons’ ball-handlers early, forced Central into six turnovers in its first seven possessions and 18 total in the game. Eight of those Falcon turnovers were Strasburg steals.

“Defense is gonna get us into our offense, so if we play good defense we’ll be able to set up our offense in transition,” said Sperry, who had three steals to go along with 14 points. “And I think if we play tight defense like we did tonight, be aggressive, then we’ll be fine this season.”

For Central, Thursday’s performance was a continuation of the offensive struggles that emerged in the second half of its season-opening loss to Sherando on Tuesday. Against Strasburg, the Falcons shot just 20.8 percent from the floor, including a 16.6-percent mark in the first half.

“I just knew we were gonna have to be able to shoot the ball from the outside,” added Scott, whose team made just 4 of 12 3-point attempts. “It just didn’t work out that way.”

Senior forward Maria Marston, the Falcons’ leading scorer a season ago and the team’s go-to offensive weapon this winter, struggled to find a rhythm for most of Thursday night. She finished with a team-high 13 points but most of that output came in the fourth quarter when Marston scored all 10 of Central’s points.

Marston missed her first five 3-pointers before connecting from deep for the first and only time in the game early in the fourth quarter.

“When she’s on, we’re pretty good,” Scott said of Marston, who averaged 12.5 points per game last year. “Not to put the blame on her, she just had an off night tonight. All good players have them. And what I’m proud about is she didn’t stop shooting the ball. Lots of times when a shooter starts missing shots – and that’s her thing, she kind of gets down on herself. I keep preaching to her, keep shooting the ball, eventually it’s gonna fall for you.”

Senior guard Maya Frye-Williams, a regular starter who came off the bench against Strasburg, helped pick up some of the slack for Central and finished with 12 points.

“I kind of wanted to bring a message to her not starting her tonight and I think it kind of woke her up because that’s the best I’ve probably seen her play in a long time,” Scott said. “I hope that carries over from here on out, to let her know that she can play a little bit.”

Another encouraging sign for Central was its performance on the glass. The Falcons scrapped for rebounds against the Rams and ended up getting outrebounded by a slim 41-37 margin.

“We did so many box-out drills, the girls are probably tired of hearing me talk about boxing out,” Scott said. “But I mean in a way it worked. We did rebound it well, very well tonight, so that’s one big positive thing I’m taking from tonight. It proves to them that when they box out and listen and do the things they’re taught to do, that we’re not a bad team.”