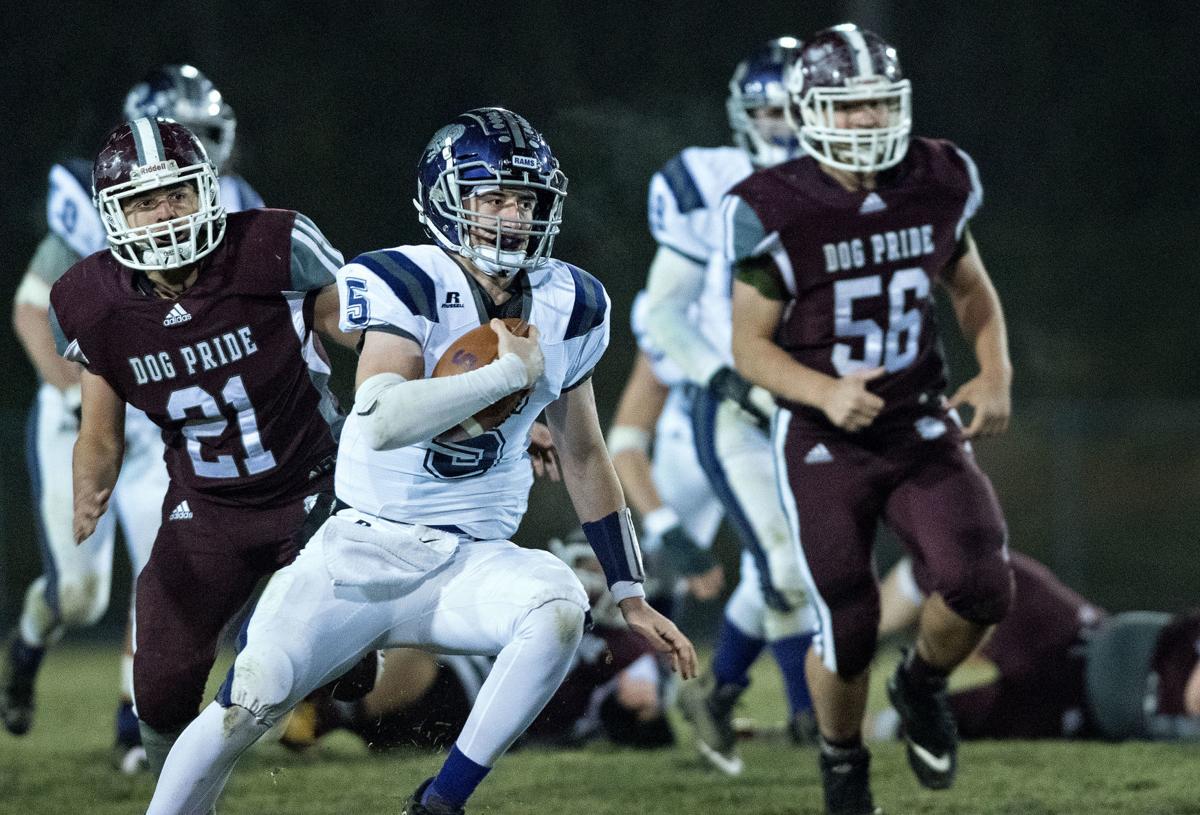 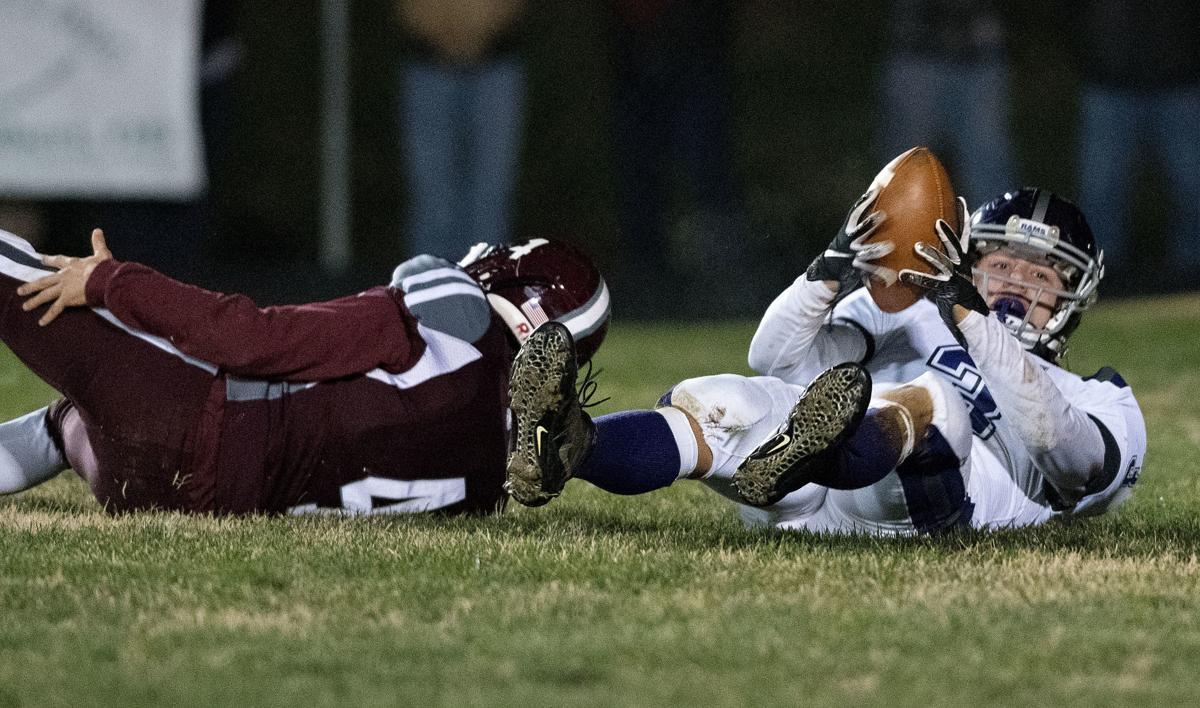 Strasburg’s Trey Stinnette III holds the ball up in the end zone after catching this touchdown pass near the end of the second quarter. 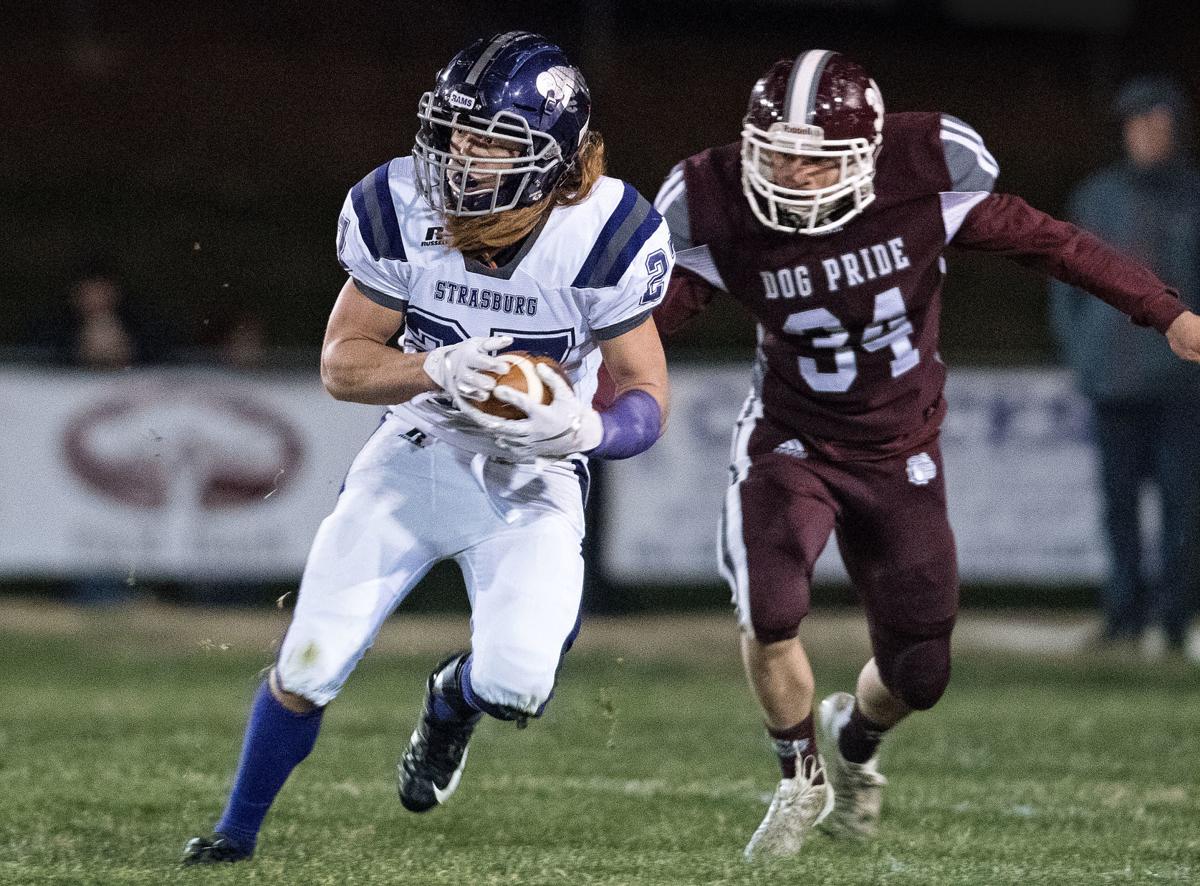 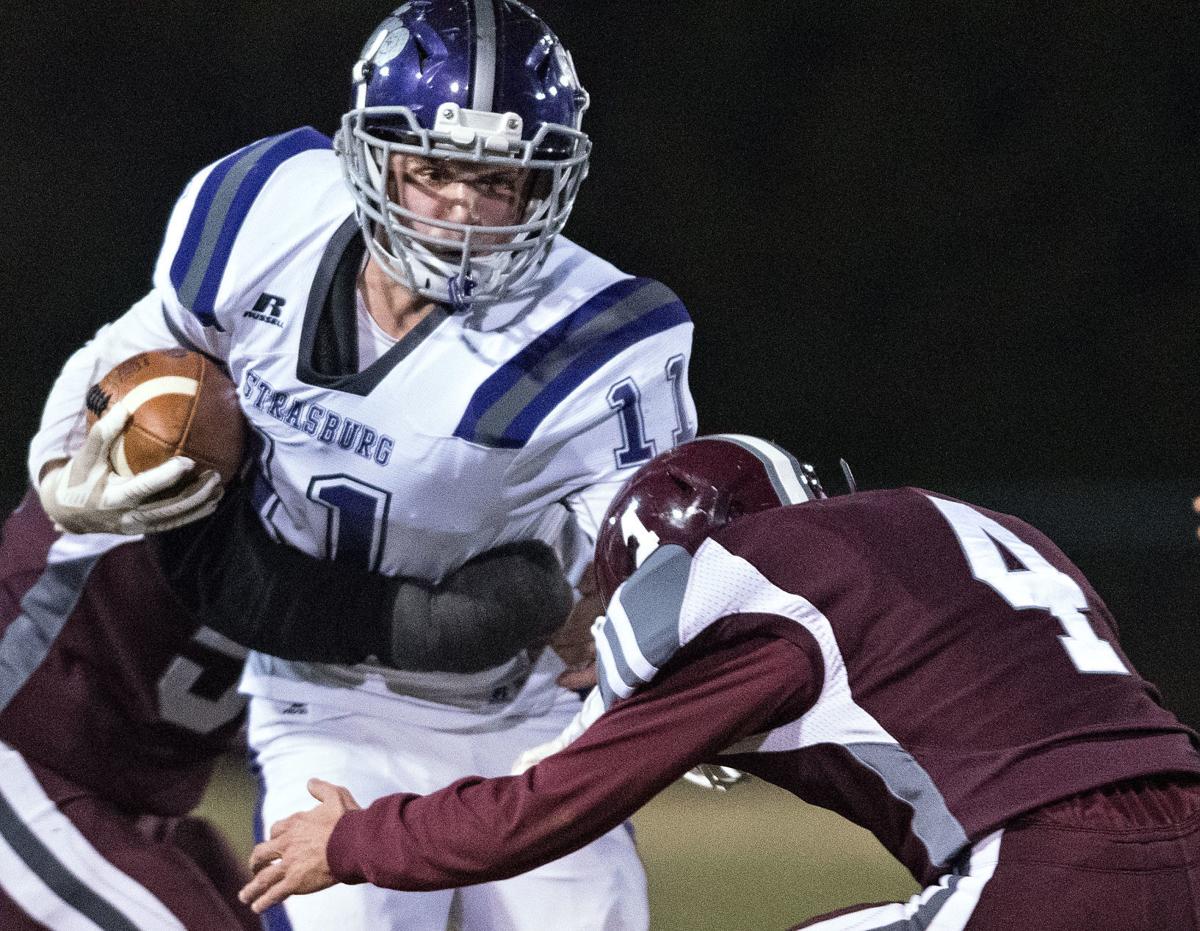 Strasburg’s Peter McKechnie prepares to take a hit from Luray's Jaden Couper on this running play. 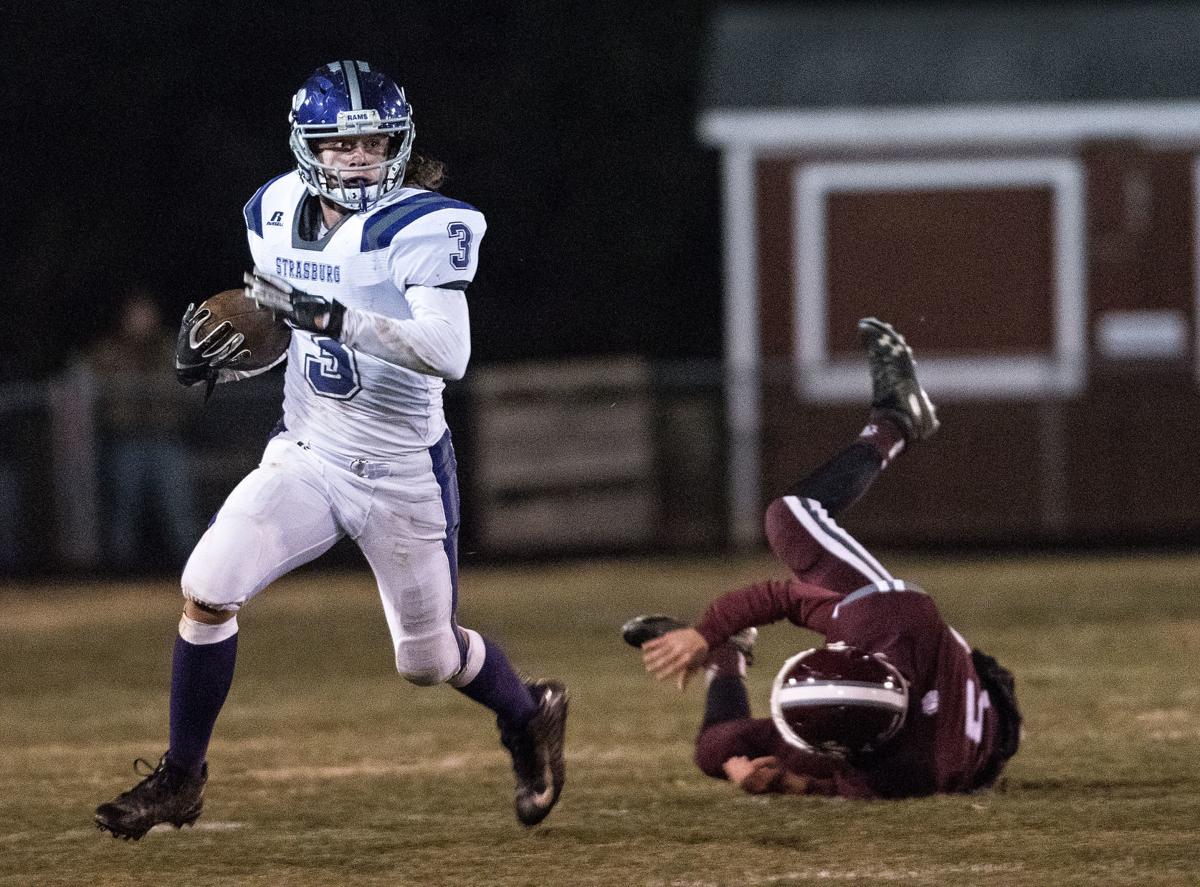 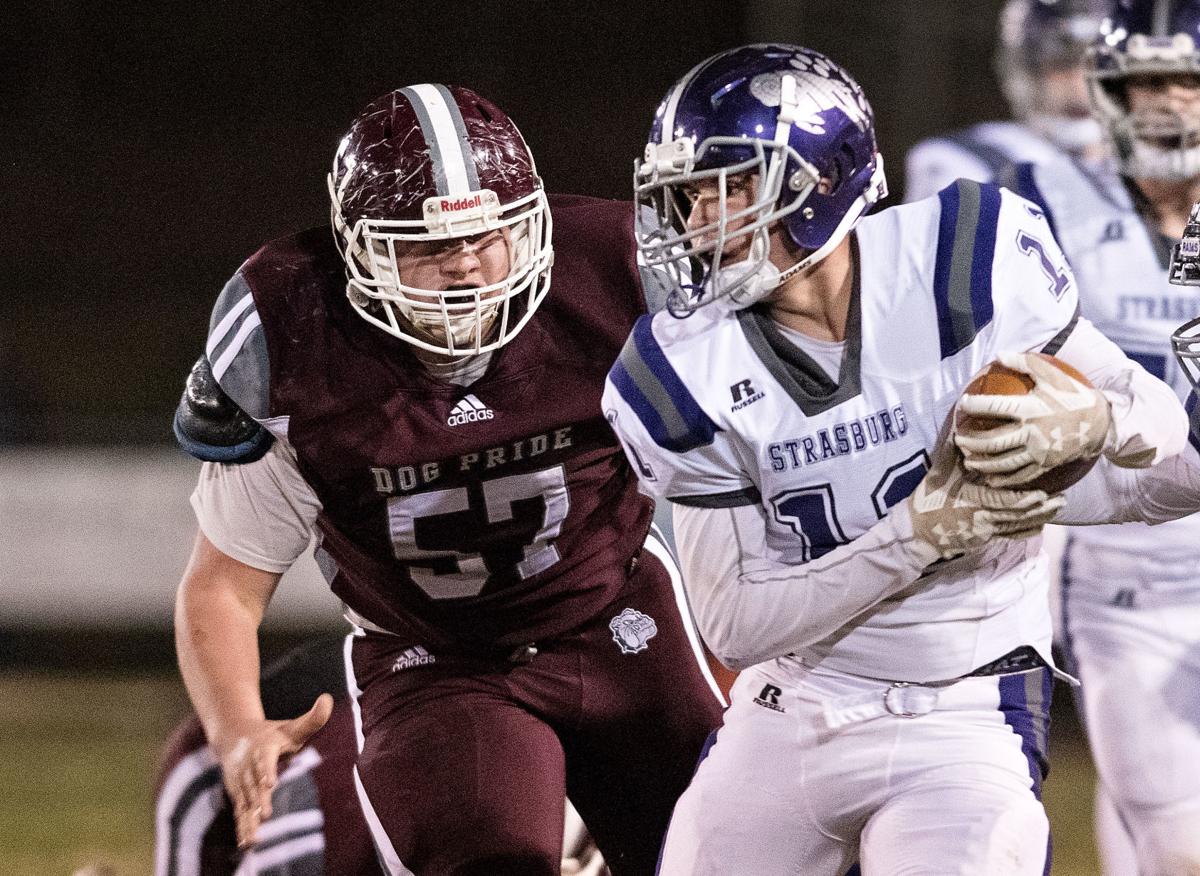 Strasburg’s Peter McKechnie looks for running room as he is pursued by Luray’s Hayden Campbell. 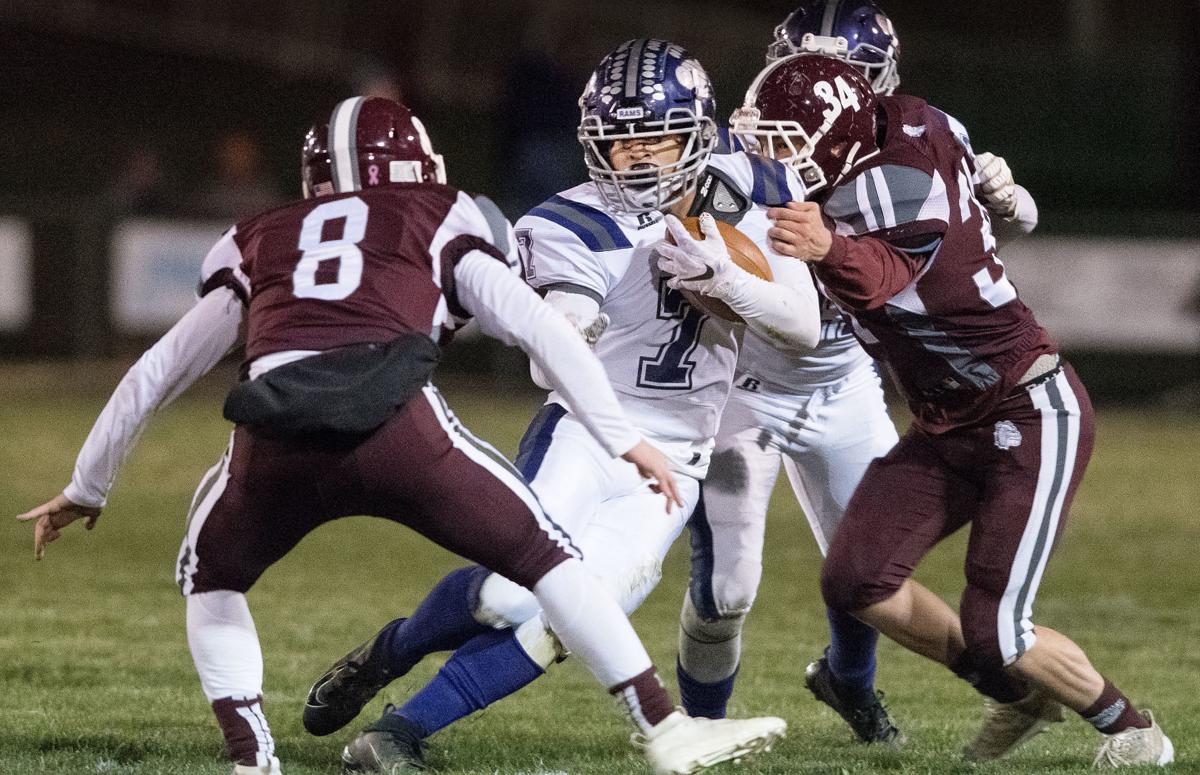 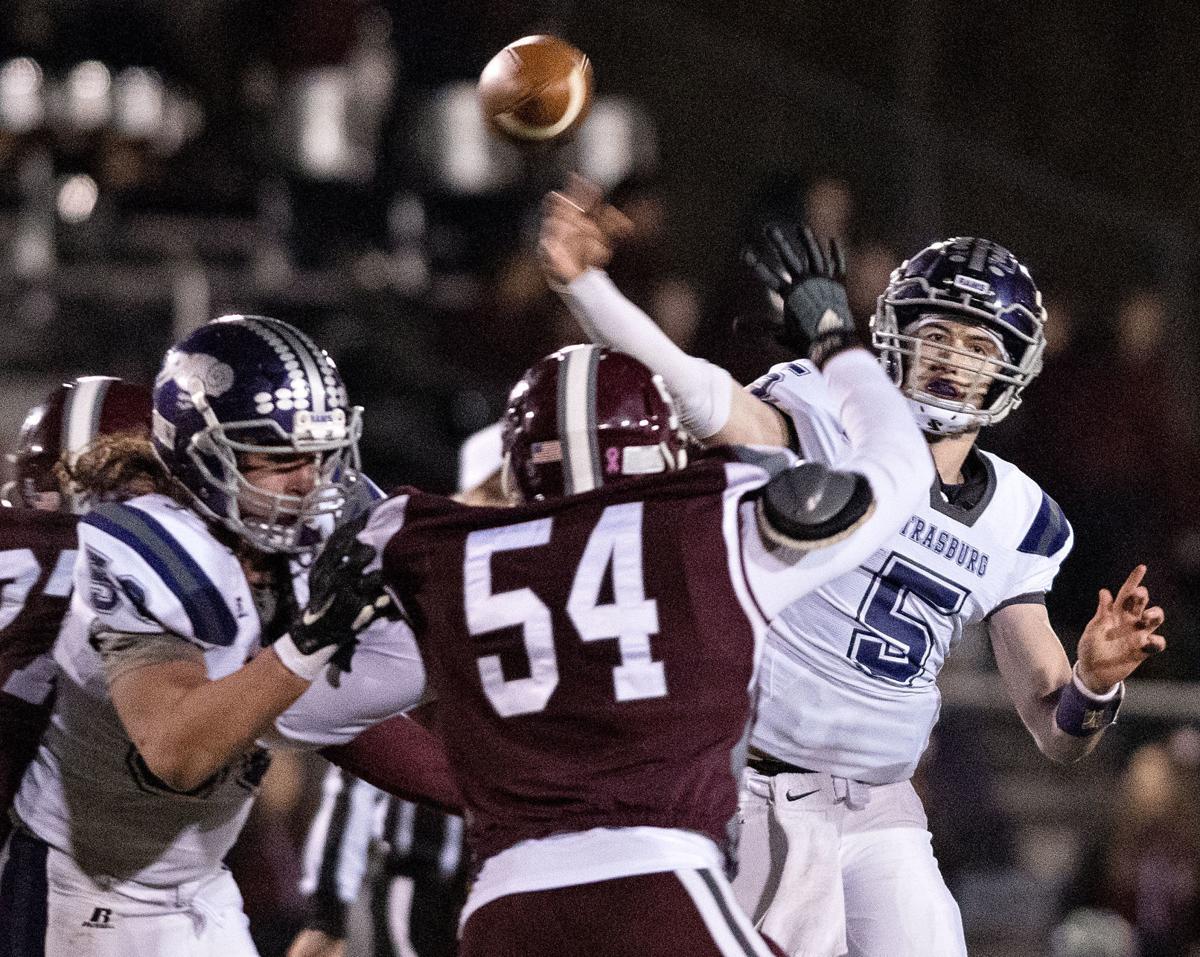 Strasburg’s Chase Hart throws the ball while under pressure from Luray’s Tyler Pence. 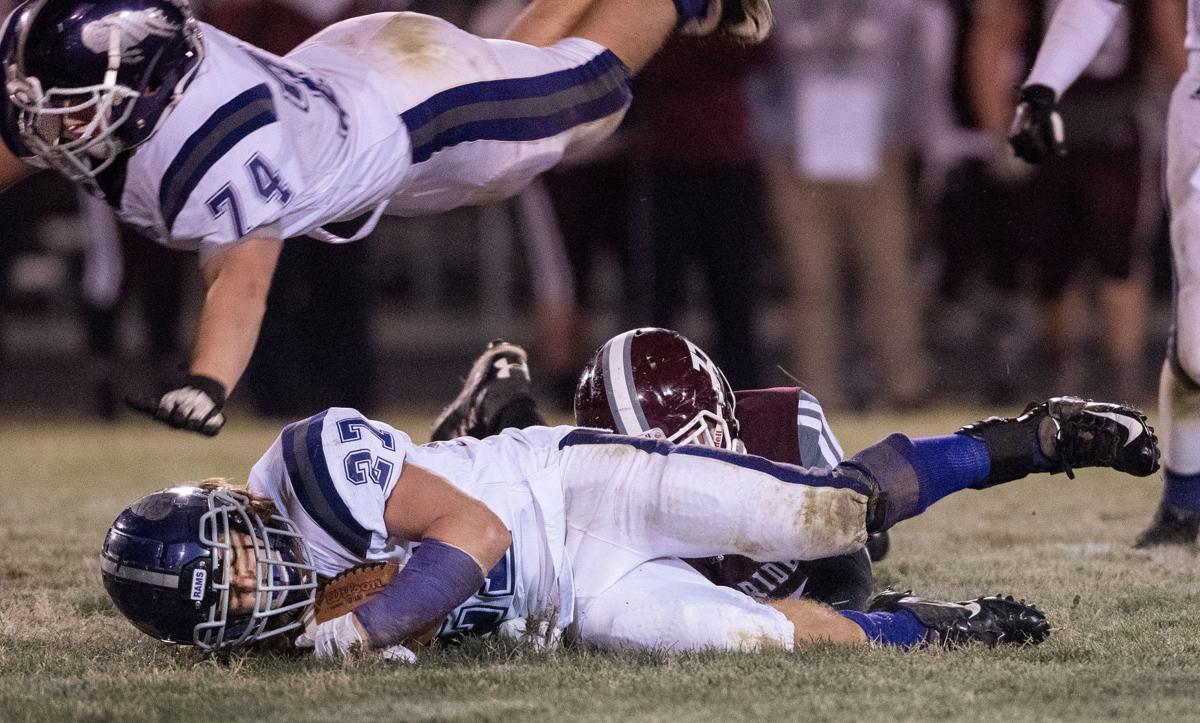 Strasburg’s Trevor Sager recovers this fumble off a punt  by Luray as teammate Camren Rutz flies over him Friday night. 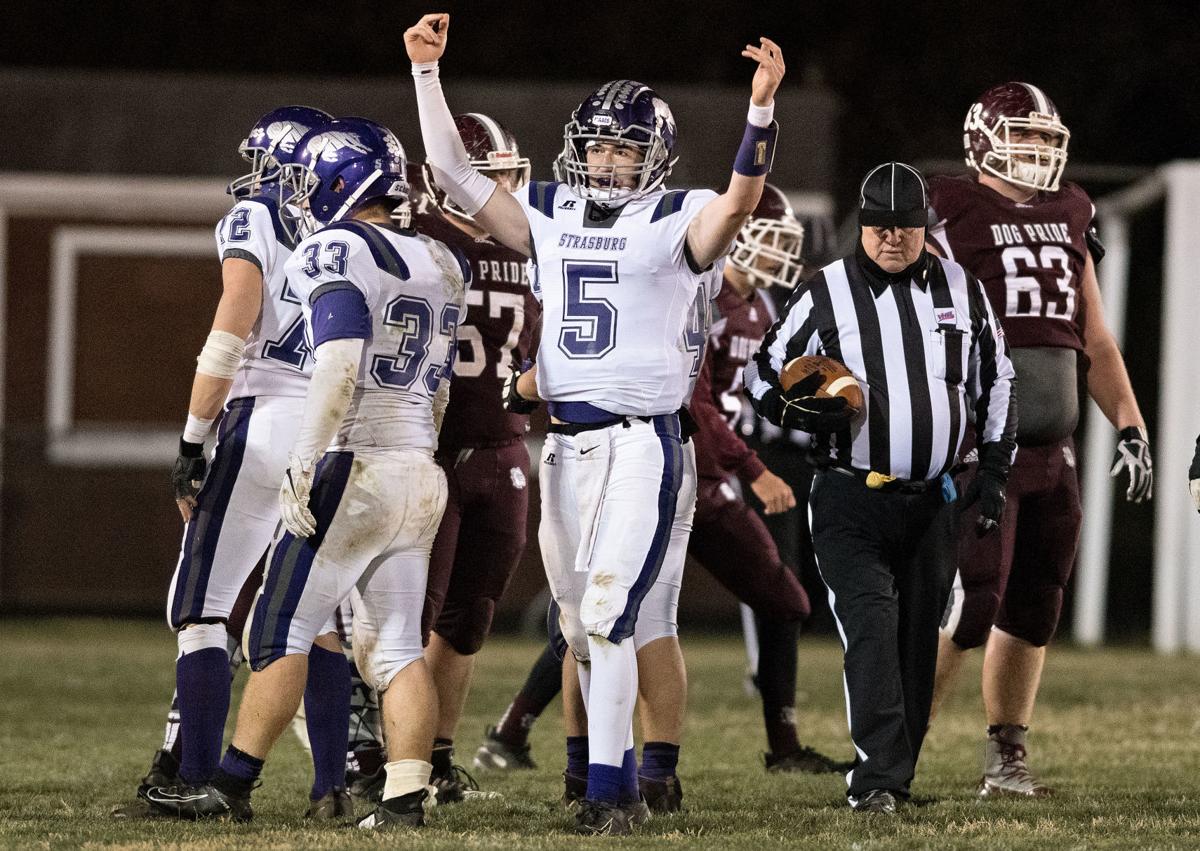 Chase Hart celebrates as time runs out during the Region 2B quarterfinals held Friday night in Luray.

Strasburg’s Trey Stinnette III holds the ball up in the end zone after catching this touchdown pass near the end of the second quarter.

Strasburg’s Peter McKechnie prepares to take a hit from Luray's Jaden Couper on this running play.

Strasburg’s Peter McKechnie looks for running room as he is pursued by Luray’s Hayden Campbell.

Strasburg’s Chase Hart throws the ball while under pressure from Luray’s Tyler Pence.

Strasburg’s Trevor Sager recovers this fumble off a punt  by Luray as teammate Camren Rutz flies over him Friday night.

Chase Hart celebrates as time runs out during the Region 2B quarterfinals held Friday night in Luray.

LURAY -- Given the chance for immediate redemption, Strasburg’s football team flipped the script on Luray in the Region 2B quarterfinals on Friday night.

The Rams were the team that did whatever it wanted to offensively. They reeled off the big kickoff returns that produced points and set up short fields. They rallied from a brief first-half deficit and sucked the life out of the Bulldogs in the fourth quarter on their home field. And most importantly, the Rams never let Luray’s running game grind them down.

One week after Luray’s rushing attack trampled a gassed Strasburg defense in the second half in a Bulldog win in the regular-season finale, the Rams limited Luray to just 46 yards over the final two quarters of Friday’s rematch, devolving a game that began as a shootout into a one-sided affair that ended in a 39-21 Strasburg win.

It was the Rams’ first playoff win since 2016 and sends No. 5 Strasburg into next week’s Region 2B semifinal game at top-seeded Stuarts Draft.

“It’s an amazing feeling,” Rams senior running back/linebacker Jalen Bray said as he strolled across Luray’s field following the win on a frigid night, the team’s symbolic sledgehammer slung over his shoulder. “We came out here, we did this one for the seniors, all our guys. I’m just really proud of the whole team tonight. We played like dogs, man. We played like dogs. I’m proud of everybody.”

When the two teams headed to their locker rooms at the end of a back-and-forth first half on Friday night, the game felt like it would be decided by the team that had the football last.

But Strasburg (8-3), which had scored in the final 30 seconds of the first half to regain the lead, made it a two-score game with its touchdown drive to open the third quarter and the Rams’ defense put the clamps on a Luray (8-3) offense that had rushed 42 times for 203 yards in the first half.

The Bulldogs, who had 13 first downs in the first half but played the entire fourth quarter without starting quarterback Dalton Griffith, didn’t move the chains again after halftime until their final possession of the game midway through the fourth quarter. By that point, Strasburg was enjoying a comfy 18-point lead.

All four of Luray’s second-half possessions ended on downs on its own side of the 50, the first two setting up Strasburg touchdown drives that extended the Rams’ lead to three scores. The Bulldogs' riskiest fourth-down gamble of the night ended in a turnover on downs at the Luray 8 and set up the Rams' final score with 9:30 left.

It was quite the contrast to the regular-season finale, when the Bulldogs moved the ball at will and scored 22 points in the second half.

“When you’ve got a (defensive) coordinator like coach (Tripp) Lamb, man, he knows his stuff,” Rams senior quarterback/defensive back Chase Hart said, “and it’s a mistake playing us twice because you’re not gonna score many points the second time.”

Head coach Mark Roller credited the Rams with buying into Lamb’s defensive game plan, adding that Strasburg “outlasted” Luray in the rematch. The Rams, whose only real flaw on the night was an 0-for-3 mark on 2-point conversion attempts, outgained Luray 303-254.

“The (defensive) line did really good just keeping (Luray’s blockers) from being able to get to the backers, so we just came in and made the plays,” Rams junior linebacker Trey Stinnette said. “I think the line just did a great job keeping them from getting them to the second level, containing them.”

Strasburg’s offense, led by Hart’s four touchdowns, was efficient on Friday night and finished drives, something the Rams couldn’t do on a couple of occasions in Round 1 against the Bulldogs.

The Rams had just three first-half possessions but scored touchdowns on all of them, starting with an impressive 14-play, 84-yard drive after Luray turned the ball over on downs at the Rams’ 16-yard line on the game’s opening series. Hart’s sneak from a yard out gave Strasburg a 7-0 lead.

Both teams traded touchdowns for the rest of the first half, a couple big kick returns setting up Strasburg’s offense with short fields along the way while another produced the Rams’ second touchdown of the night.

After Luray tied the game at 7-7 with a lengthy drive, Stinnette fielded the ensuing kickoff on the run at the 30-yard line, found a hole up the middle of the field and raced 70 yards to the end zone to reclaim the lead for the Rams early in the second quarter.

When the Bulldogs again tied the game, Stinnette’s 27-yard return to the Luray 45 on a squib kick set up Bray’s short touchdown run. And when Luray briefly claimed a 21-20 lead with less than a minute left in the first half, Kamryn Pangle’s 33-yard return to the Luray 49 (Pangle fumbled but Strasburg recovered) led to Hart’s 34-yard TD pass to Stinnette that gave the Rams a 26-21 lead going into halftime.

“Any time that they scored we didn’t get down about it,” said Stinnette, who made a leaping effort in the end zone to high-point Hart's pass that seemed to hang in the air for an eternity. “We didn’t get upset that they scored. Instead, it just lit more fire and got us going even more to go down there and punch one right back.”

Strasburg officially turned the tide of the game with a scoring drive at the start of the third quarter that ended when Hart scrambled for a 47-yard touchdown that put the Rams up 32-21.

“People be lacking (respect for) my speed, man,” quipped Hart, who's known more for his arm strength than his mobility. “I worked on that a lot this past offseason. I’ve had a couple nice scrambles this year. They lined up in man coverage and everyone just cleared out and I stepped up and saw an opening. I was gonna hit a drag over the middle because they blitzed, but (the receiver) wasn’t looking yet so I just took off and saw an opening, got some great blocks and made one cut and was out.”

Hart’s scramble gave the Rams a two-score lead in a game that, to that point, had been a back-and-forth affair.

“From that point on we were clicking on all cylinders,” Roller said. “Jalen did a good job running the ball. We got some action (in the running game) out of Peter McKechnie and then there at the end Justin Day was toting it a little bit. Our guys are psyched and I tell you what, we couldn’t have played a much better game tonight.”

“It’s awesome,” Roller said of the win. “I told everybody at the beginning of the year this is a special group and I told them this week before the game. I said you’re a special group, whatever you set your mind to, you can do. This is the first step in that process.”

Next up for Strasburg is the challenge of toppling No. 1 Stuarts Draft (10-1), whose only loss this season came to Class 1 powerhouse Riverheads in the final week of the regular season.

“Ratings don’t mean (anything) to us,” Hart said. “We know we can play with anyone and that’s what we’ve got to do.”