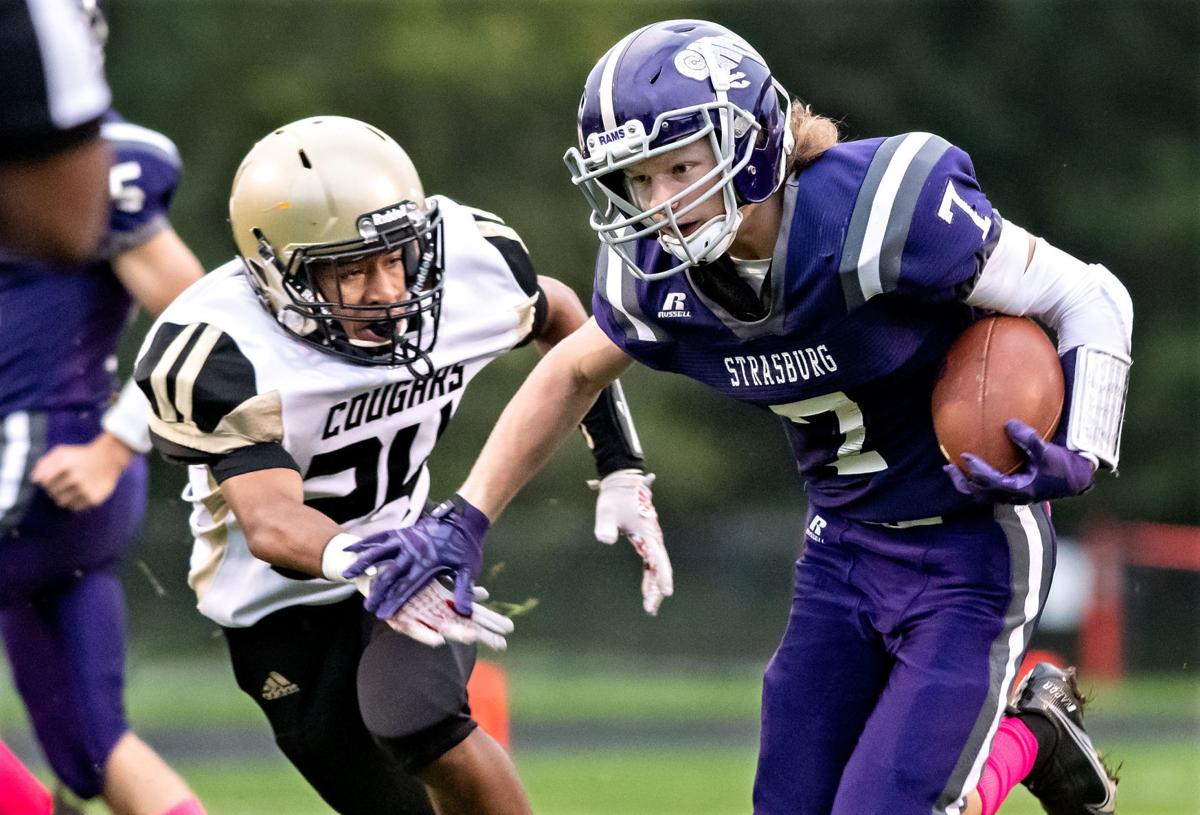 Strasburg’s Griffin Turpen finds a hole as he runs in for Strasburg’s first touchdown Monday night as Manassas Park’s Xavier Foster tries to catch up. 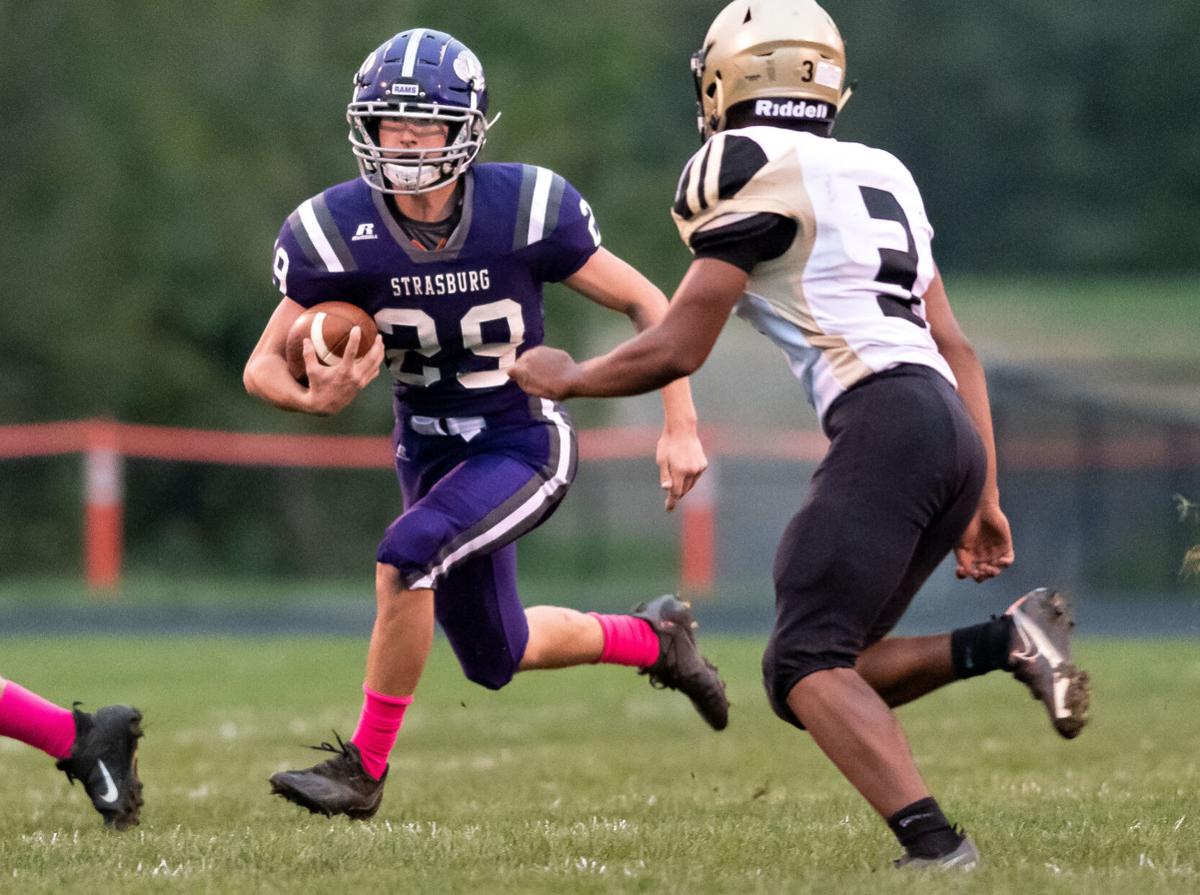 Strasburg’s Tanner Jenkins runs outside as Manassas Park’s Jordan Lithisack tries to run him down. 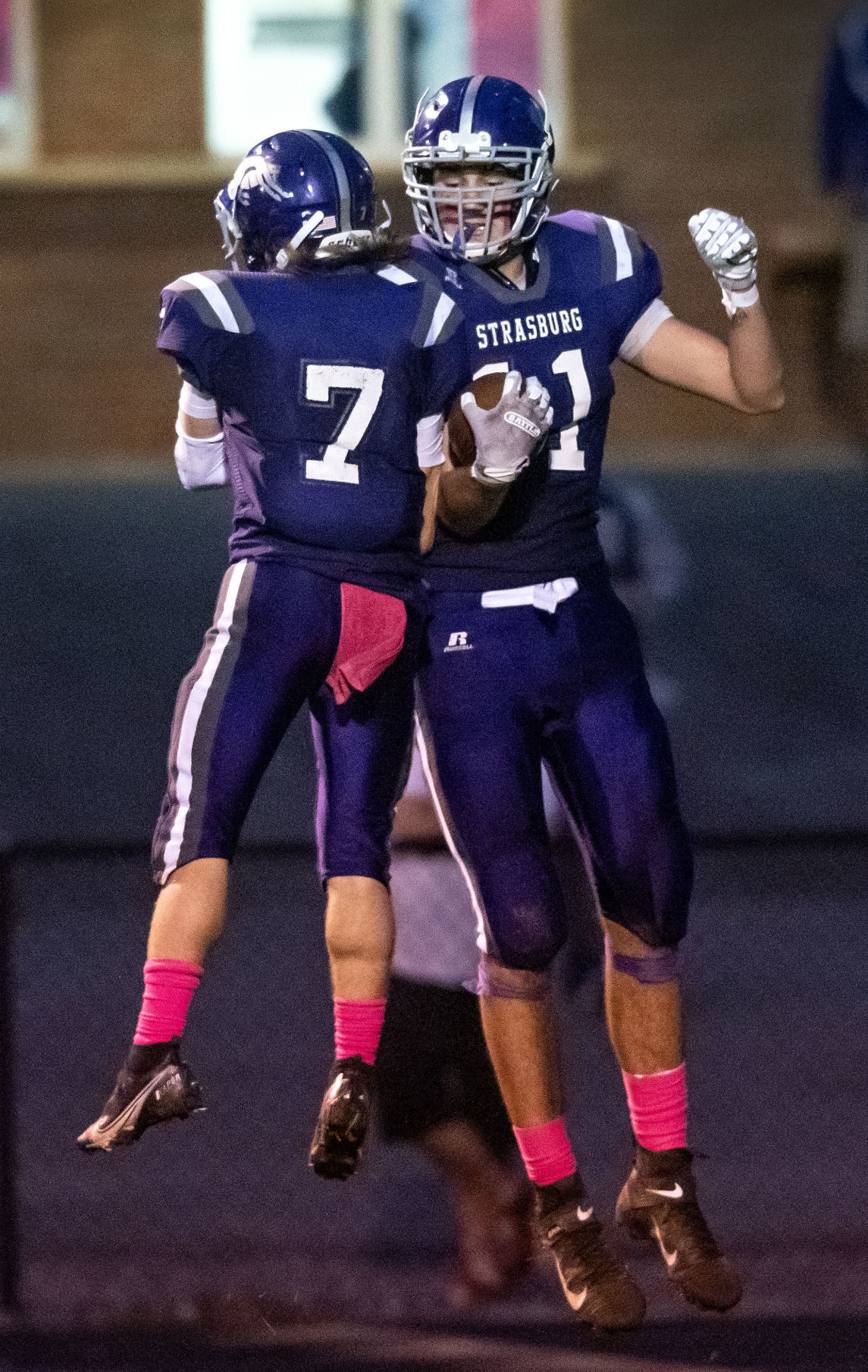 Strasburg’s Griffin Turpen, left, celebrates with Walker Conrad after Conrad’s touchdown reception during the first half. 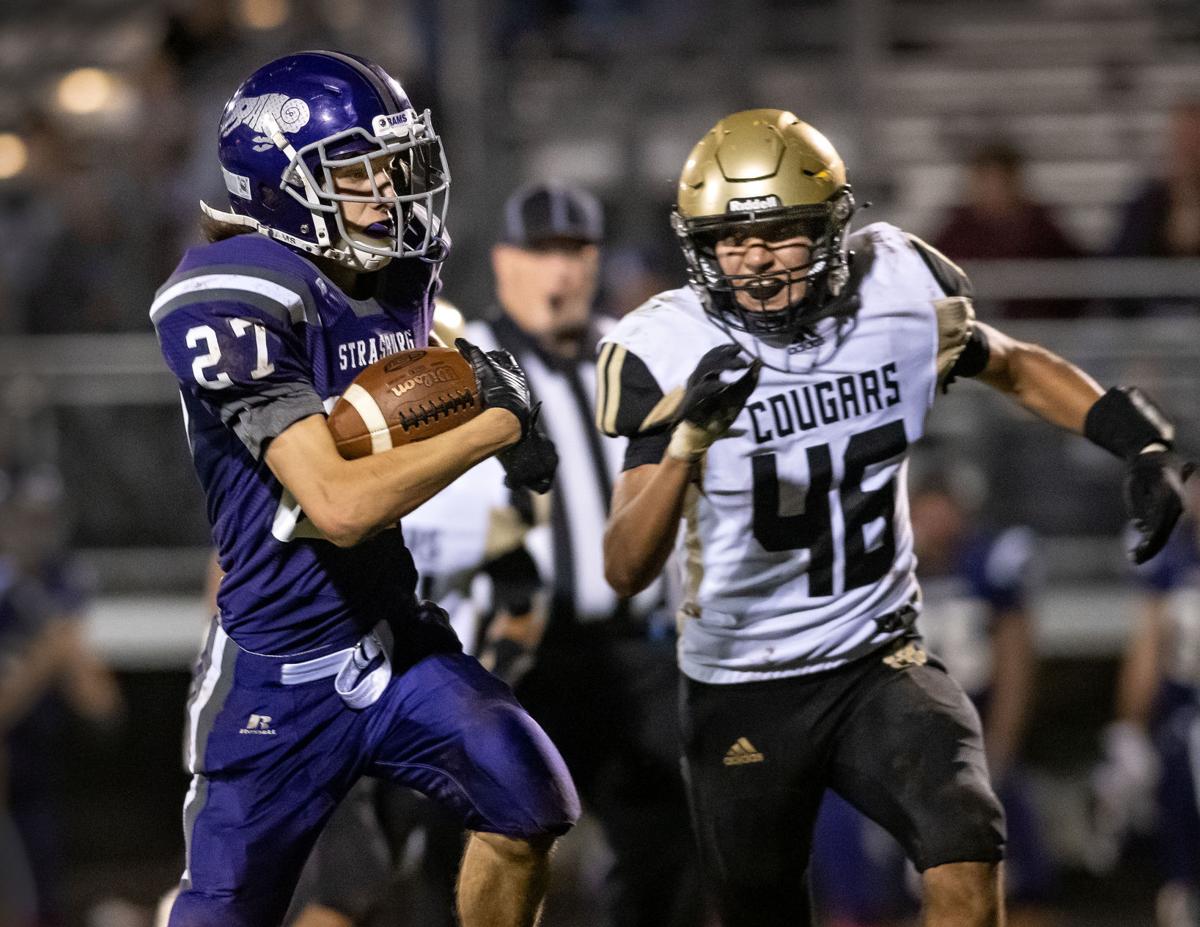 Strasburg’s Cayden Pangle runs outside Manassas Park’s Gerardo Villalobos-Ramos to set up for a touchdown inside the four yard line. 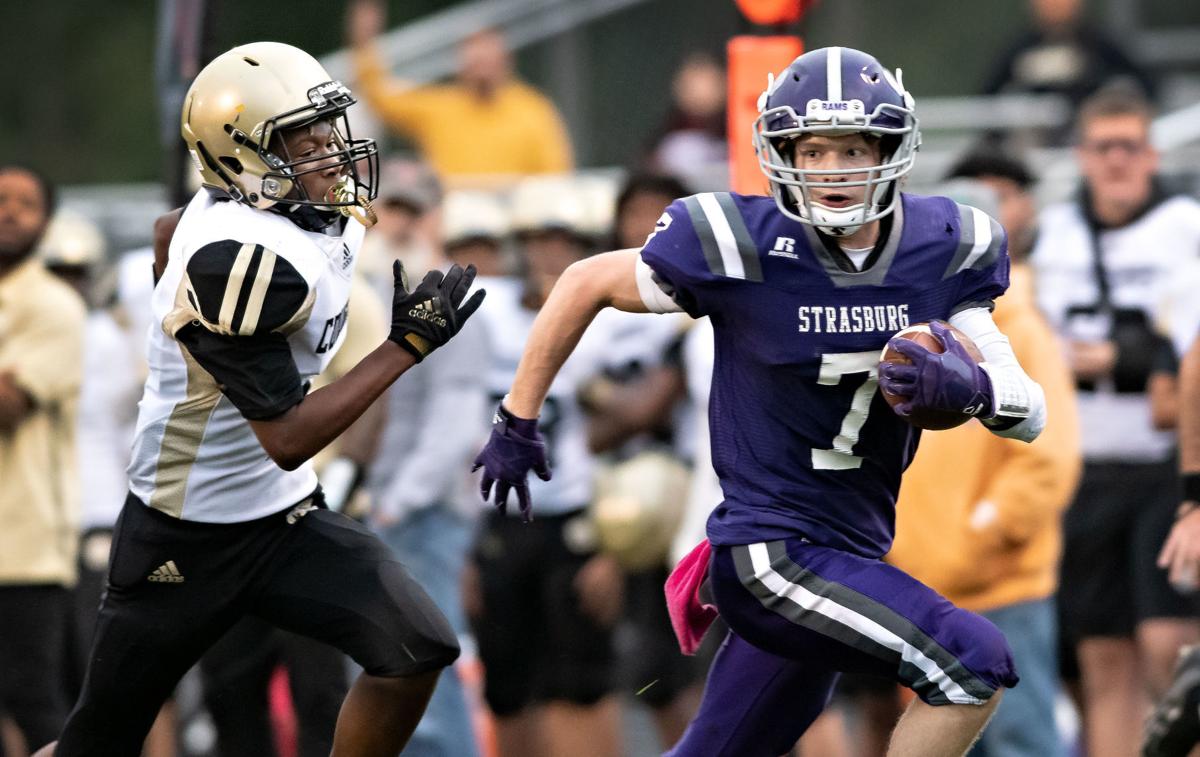 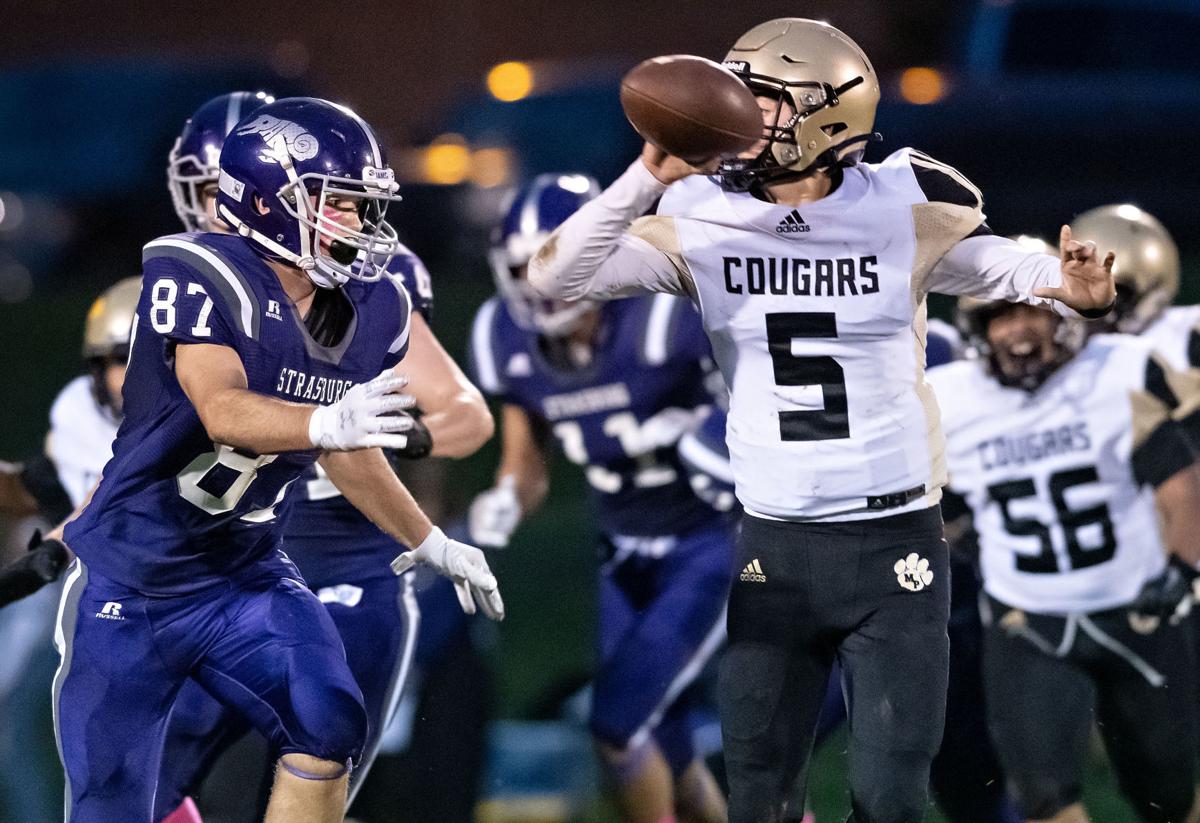 Strasburg’s Griffin Carter tries to run down Manassas Park quarterback Jaeden Gorenflo as the quarterback flips a pass during their game on Monday. The Rams play at Madison County on Friday.

Strasburg’s Griffin Turpen finds a hole as he runs in for Strasburg’s first touchdown Monday night as Manassas Park’s Xavier Foster tries to catch up.

Strasburg’s Tanner Jenkins runs outside as Manassas Park’s Jordan Lithisack tries to run him down.

Strasburg’s Griffin Turpen, left, celebrates with Walker Conrad after Conrad’s touchdown reception during the first half.

Strasburg’s Cayden Pangle runs outside Manassas Park’s Gerardo Villalobos-Ramos to set up for a touchdown inside the four yard line.

Strasburg’s Griffin Carter tries to run down Manassas Park quarterback Jaeden Gorenflo as the quarterback flips a pass during their game on Monday. The Rams play at Madison County on Friday.

STRASBURG -- Given the circumstances, Strasburg’s football team probably couldn’t have drawn up a more perfect outcome on Monday night.

Coming off of a COVID-related pause that limited the Rams to just two days of full practice to prepare for Manassas Park, and with a quick turnaround looming for Friday’s road trip to Madison County, Strasburg jumped all over the struggling Cougars from the start and rolled to a 57-0 non-district win.

The comfortable margin allowed the Rams to substitute liberally and balance the workload among the 26 available players, all of which saw action against Manassas Park in a game that was pushed back three days to allow Strasburg time to get a large group of its players back from quarantine.

It was Strasburg's first game since a Sept. 24 loss to Clarke County.

“It was tough for us at first because we didn’t have practice for a week and everything like that, having to force everything into two days,” Rams senior lineman Dale Waybright said. “Game planning for a team, it’s not something that you can just do in two days, normally. We came out here, we took care of business. … We all came out and played as a team and the result on the scoreboard just speaks for itself.”

Strasburg’s offense had its way with a Manassas Park team that struggled with missed tackles, running for 311 yards on just 30 carries and piling up 363 yards of total offense, while the Rams’ defense allowed just 132 yards, forced four turnovers and handed the Cougars (0-6) their sixth shutout loss in as many games.

Seven different players scored touchdowns for the Rams, who scored on all eight of their possessions on Monday night. Strasburg also committed just one penalty and didn’t turn the ball over.

“We got some good work in,” Strasburg head coach Mark Roller said, “and the thing that I think we did the best was we executed at a pretty high level, which is something that I wanted to be able to see. We were blocking the right people, getting to the right holes. Defensively we had some trouble lining up there a little bit early on but then we fixed that problem. It’s one of those games that you’re glad you were able to play it and you come out of it with a lot of guys playing and no injuries.”

Strasburg (4-1) asserted itself from the opening kickoff, which senior Griffin Turpen returned 35 yards to the Manassas Park 47. On the Rams’ first offensive snap, senior Tanner Jenkins took the handoff and went 47 yards for a touchdown and a quick 6-0 lead.

A Manassas Park mishap on the ensuing kickoff left the Cougars to start their first possession at their own 5-yard line and the Rams’ defense forced a safety two plays later, Waybright leading a charge that dropped running back Jose Alvarez Portillo in his own end zone for a 1-yard loss and two more Strasburg points.

“We all came out on defense and did what we were supposed to,” Waybright said. “We played sound defense. (Defensive coordinator Tripp) Lamb has always done a great job giving us a great defensive game plan. He’s always helped to put us in the right spots.”

Turpen added a 31-yard TD run on Strasburg’s next drive, then pulled down the first of three Strasburg interceptions to set the stage for a 41-yard scoring drive that ended with quarterback Ryan Roller’s 5-yard scoring run that gave the Rams a 29-0 lead with 1:07 left in the first quarter.

“It’s a big deal because it gives us a lot of confidence,” Turpen said of the Rams’ hot start on Monday night, “and if we let them hang, then they’re gonna build confidence and run with that.”

Pangle followed his second-quarter interception with a 3-yard touchdown run -- which he set up with a 34-yard scamper on the previous play -- and Ryan Roller’s interception late in the first half preceded his 52-yard touchdown pass to a wide-open Walker Conrad that sent Strasburg into halftime with a 43-0 lead.

Manassas Park had its chances to score its first points of the season. The Cougars dropped a would-be touchdown pass in the second quarter when a receiver got loose behind Strasburg’s defense one play before Pangle’s interception, and Manassas Park twice drove to the Rams’ 30 before self-destructing with negative plays, penalties and turnovers.

The Cougars’ last legitimate chance for points came on the first drive of the second half, which came against Strasburg’s second-string defense and ended when junior defensive lineman Jaydon Williams forced a first-down fumble that senior Brady Neary recovered at the Rams’ 30.

Strasburg added two touchdowns during the second half, which was played with a running clock, as Neary -- who did not play in the first half -- found the end zone on a 13-yard run on the first play of the fourth quarter and foreign-exhange student Jonas Zimmerman capped the romp with a 3-yard scoring run with 3:38 to play.

“It was great to get those (reserve players some playing time), especially there on the line. Those guys did a really good job both offensively and defensively,” Mark Roller said. “That was something we were looking for, to see what those guys could do. And we talked about that last week with some of them who were still here, and we’ve talked about it from Day 1, being able to step in and play a role for a period of time. … They got that opportunity tonight.”

Sophomore defensive end Griffin Carter had two sacks for Strasburg’s defense, which had 10 tackles for loss in the victory.

“The O-line did a tremendous job picking up their blocks tonight,” Turpen said, “and our backs did just as well. We hit the holes that we needed to.”

“We go back into district play and they’ve improved since last year,” Mark Roller said of the Mountaineers, “so you’ve got to be able to come out on all cylinders, get ahead and kind of squash some of the momentum right from the get-go. That’s something we’re gonna preach once we get into practice there (Tuesday) and kind of see where we’re at.”