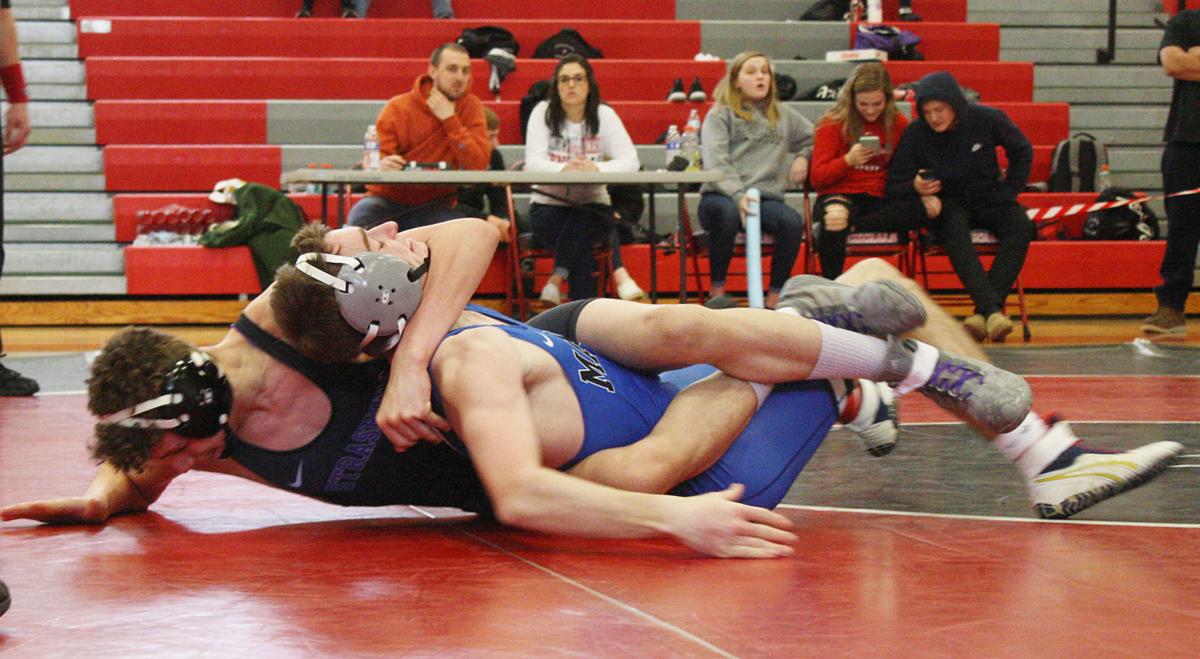 Strasburg’s Jaylon Burks works his way toward a pin against Madison County’s Jack Bourdon during the 138-pound championship match at the Bull Run District tournament in Quicksburg last weekend. Burks and Peyton Stickles (132 pounds) are the Rams’ two No. 1 seeds at the Region 2B Championships. 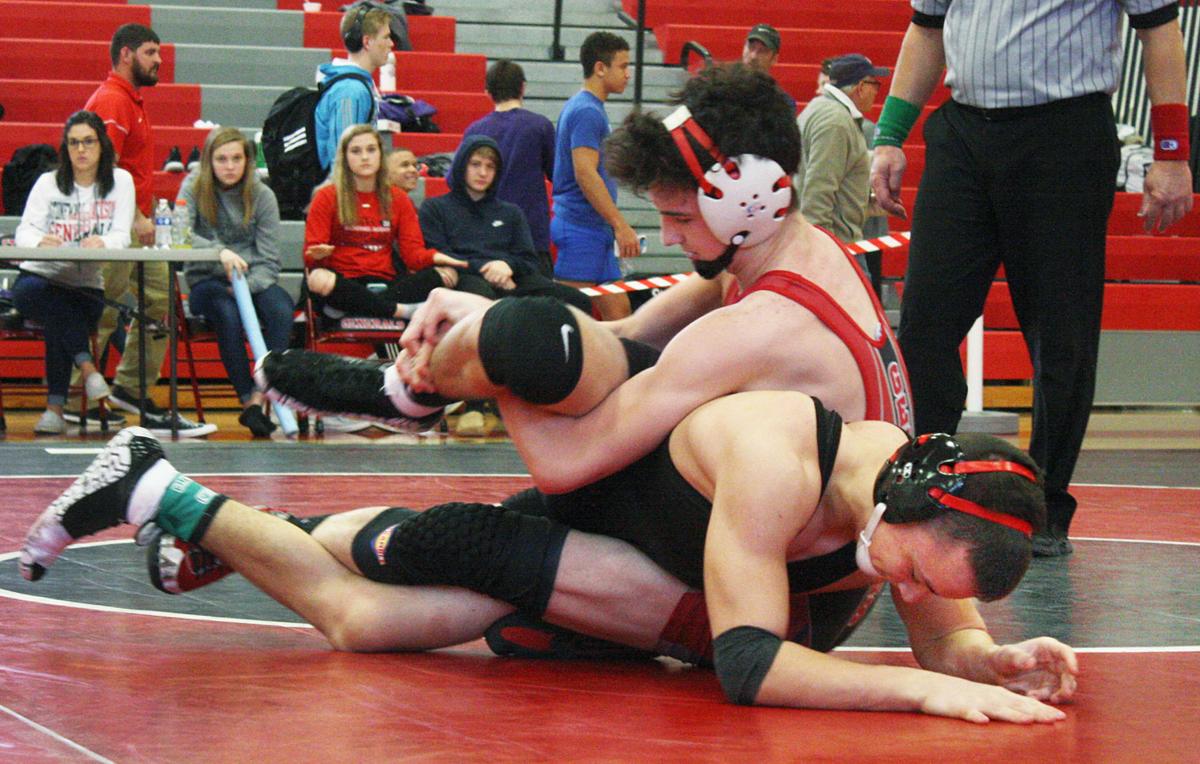 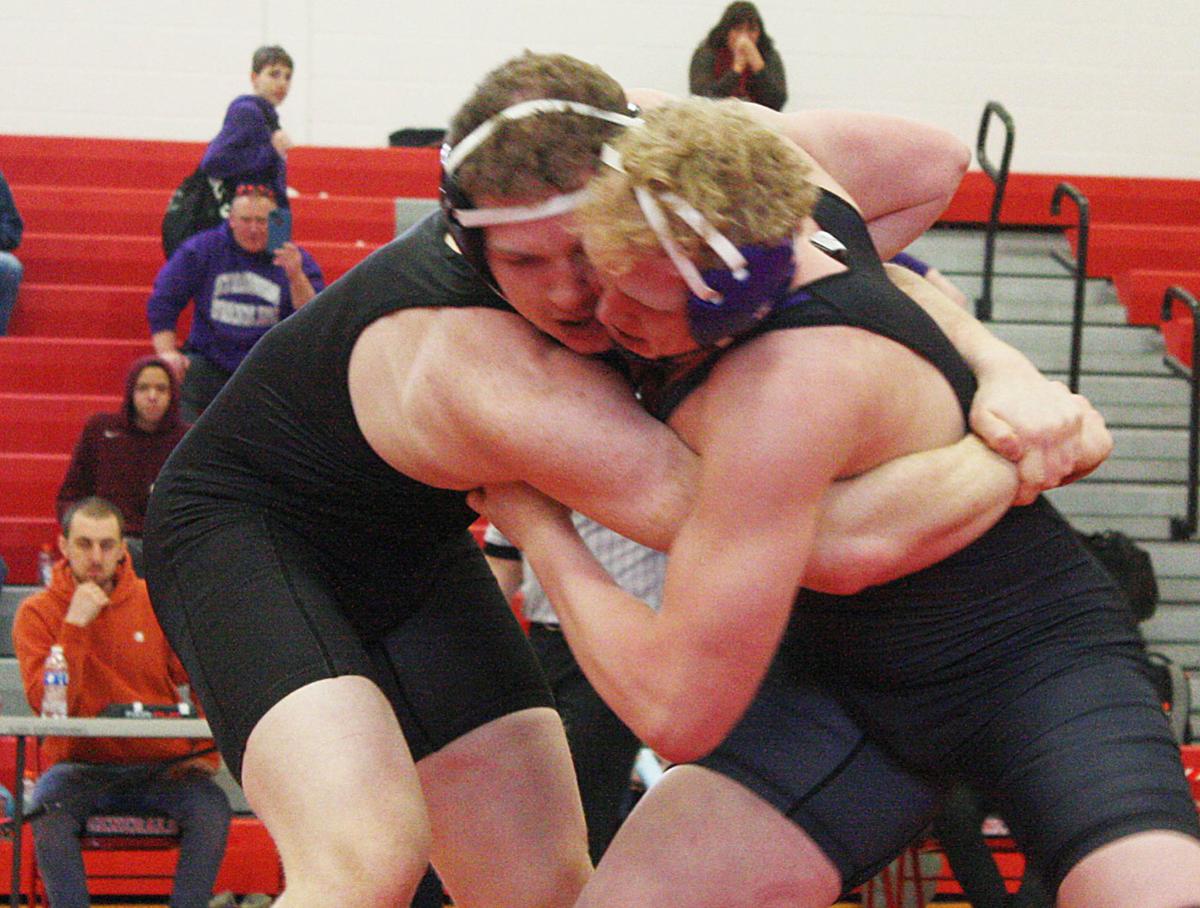 Strasburg’s Jaylon Burks works his way toward a pin against Madison County’s Jack Bourdon during the 138-pound championship match at the Bull Run District tournament in Quicksburg last weekend. Burks and Peyton Stickles (132 pounds) are the Rams’ two No. 1 seeds at the Region 2B Championships.

STRASBURG – At the start of the wrestling season, Strasburg first-year head coach and former grappler Daniel Reynolds said his goal was to get the Rams back to championship caliber. Strasburg cruised to the Bull Run District title last weekend and could cross another item off its checklist this afternoon.

The Rams and Shenandoah County rival Stonewall Jackson take part in the nine-team Region 2B Championships today at Strasburg, and the hosts have their sights set on the top prize after dominating many of the same teams in the district tournament a week earlier.

Strasburg hasn’t won a regional championship as a team since 2017, and the Rams have one less obstacle to hurdle on the road to the trophy with Wilson Memorial – the Region 2B champ in 2018 and 2019 – making the jump to Class 3 this school year.

“That’d be a huge step,” Rams senior 132-pounder Peyton Stickles said of potentially winning the region’s team title. “That’s just a building block for not just states, but next year, the year after that and stuff like that.”

Strasburg had little trouble in the Bull Run District tournament, easily outpacing runner-up Clarke County by 53.5 points while putting 10 of its 11 wrestlers into the finals and leaving Quicksburg with five individual champs.

Only three more teams from the Shenandoah District – Buffalo Gap, Stuarts Draft and Staunton – join the fray this week, meaning the Rams will see a lot of the same competition in the Region 2B tournament as they did in the district.

That also means thin brackets will again litter the regional tournament. Out of the 14 weight classes, six of them had five wrestlers or fewer entered as of Friday afternoon, and two of those – 113 and 220 – had just three individuals. The top three in each weight class advance to next weekend’s Class 2 state tournament in Salem.

Stickles said on Wednesday that he’d already spoken to his teammates about not getting “big-headed” given last week’s results and added that the Rams seemed “locked in and ready to go” in the practice room this week. Junior 138-pounder Jaylon Burks said he’s also been pushing his teammates while stressing that camaraderie is the path to victory.

“After putting 10 in the (district) finals, that gives you a great feeling because you’re like you should do good,” Reynolds said, “but it also sets the bar really high and it puts us in a position where we have a lot to lose because we did so well last week. We need to make sure we don’t get big-headed. We need to stay level headed so we can make sure we don’t underperform. We need to keep the intensity up and keep our level of performance up.”

Stickles and Burks enter the regional tournament as Strasburg’s two No. 1 seeds in their respective brackets. Freshman standout Ethan Asher (106 pounds), who is 40-1 this winter, sophomore Anakin Burks (126) and senior foreign-exchange student Ritchie Fransen (160) also won district titles last weekend and are two-seeds in the region, as are three of the Rams’ district runners-up: seniors Alec Campbell (170) and Luke Jenkins (195) and freshman Chuck Fake (182).

Stuarts Draft has four No. 1 seeds – the most in the regional tournament – including unbeaten junior 106-pounder Daniel Parkulo, who placed third in the state last season, and fellow 2019 state medalist Luke Heller (126).

“I tell the guys don’t worry about the seed,” said Reynolds, whose team has 12 wrestlers in the regional tournament. “You’ve just gotta go out there and wrestle hard and confident like it were any match. I’ve got some high expectations for us. I think it’s possible that we can qualify most of our team, if not all of our team. There’s a couple here and there that might be on the bubble.”

Stickles, who said he’s already pinned the No. 2 seed in his bracket and said his injured shoulder felt “great” on Wednesday, is looking for his third regional title.

Jaylon Burks and Campbell have also previously won regional championships for the Rams, though Burks’ came two years ago during his freshman season. He fell in last year’s 138-pound title bout in a 9-2 decision to Draft.

Stonewall had one wrestler win a district title last weekend – 120-pound freshman Jesse Lemon – and enters the Region 2B Championships with a pair of No. 2 seeds in Lemon and junior 145-pounder Hunter Cowart, who lost in overtime to East Rockingham’s Dalton Shifflett in the district finals.

Lemon had a bye into the Bull Run’s championship match and wrestled just one bout on his way to the title but said afterward it was a great momentum builder heading into the regional tournament.

“It makes me want to work harder to win next week,” Lemon said last weekend. “You can always get better at anything you do.”

Stonewall junior Lance Dorman, who hadn’t lost to a Class 2 opponent all season before getting upset by Anakin Burks in the 126-pound district championship match, is a No. 3 seed in the regional tournament and on the same side of the bracket as Burks, setting the stage for a potential rematch in the semifinals.

“You’ve got to beat everybody anyway so it don’t matter what side he’s on,” Stonewall coach Jerry Franklin said of Dorman, who injured his ankle at the start of the second period against Burks but finished the match.