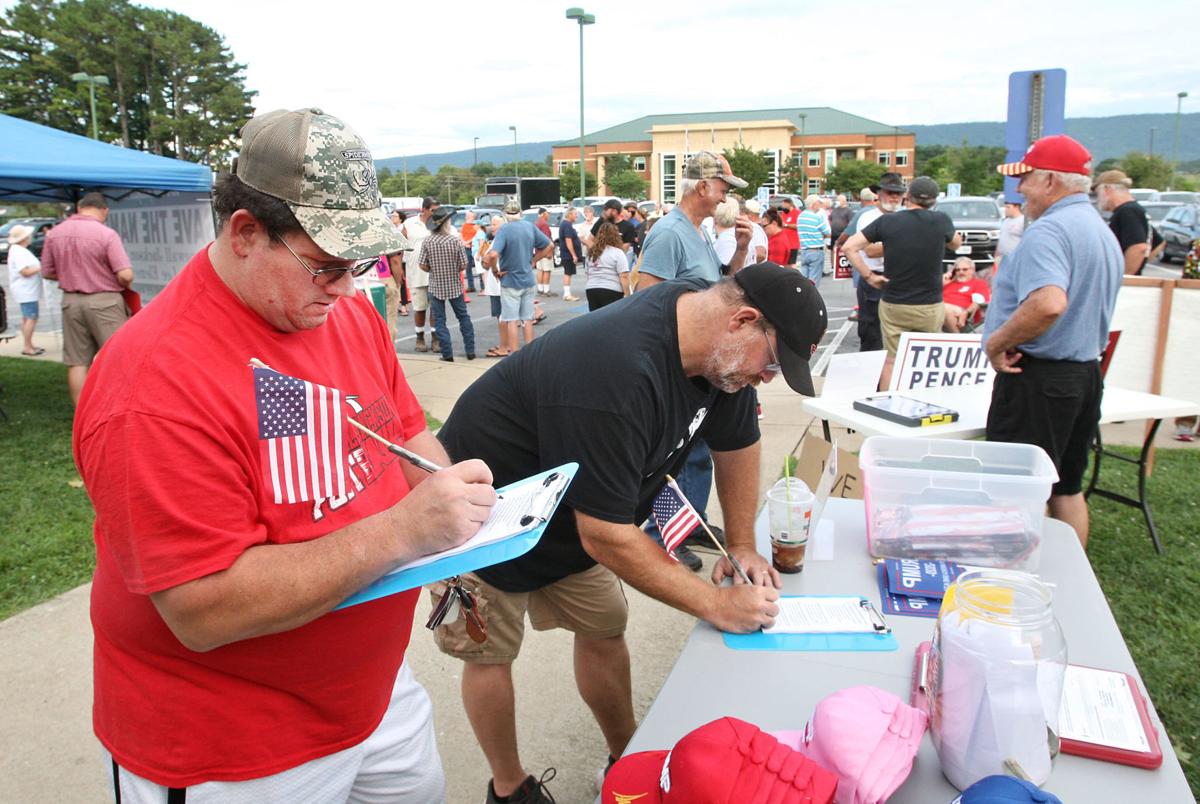 Todd Bynaker, left, of Mount Jackson, and Stacey Rinker, right, of Edinburg, sign documents in front of a Republican display where free flags were being given away. 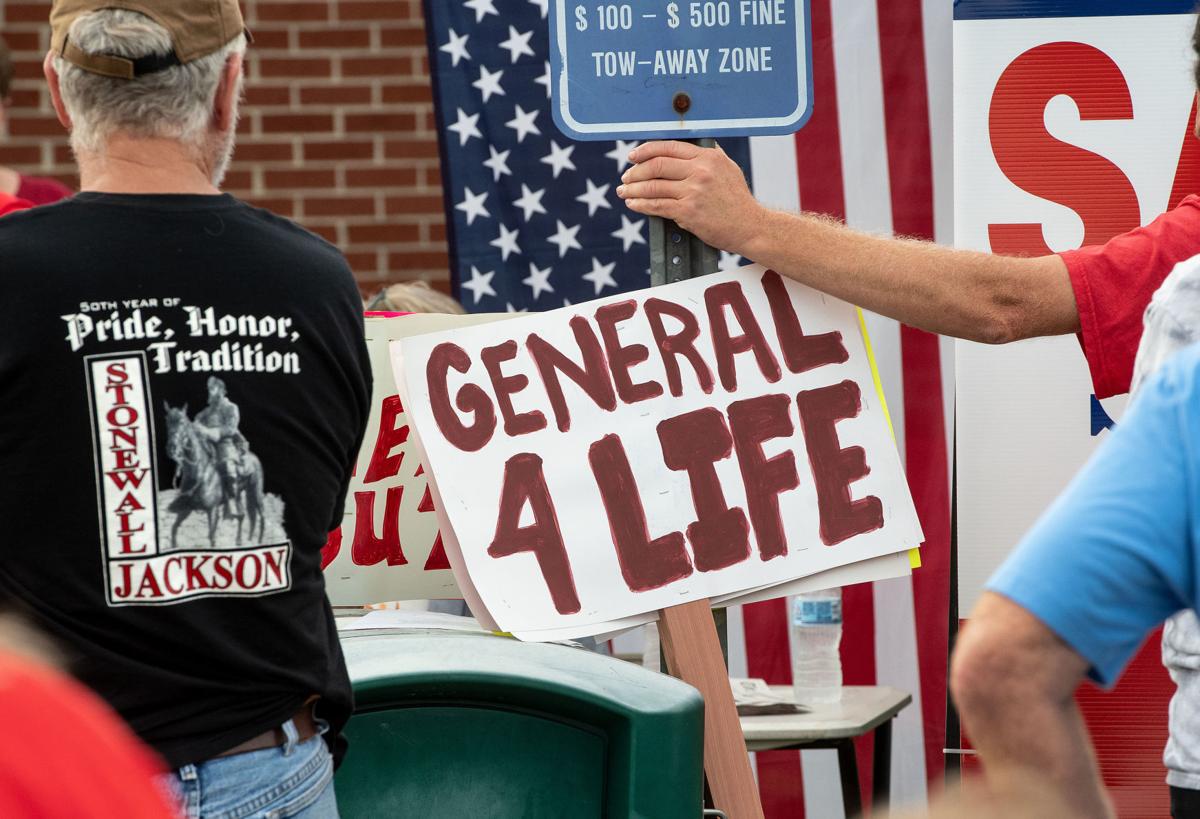 Demonstrators and signs are displayed outside the Government Center in Woodstock on Thursday evening. 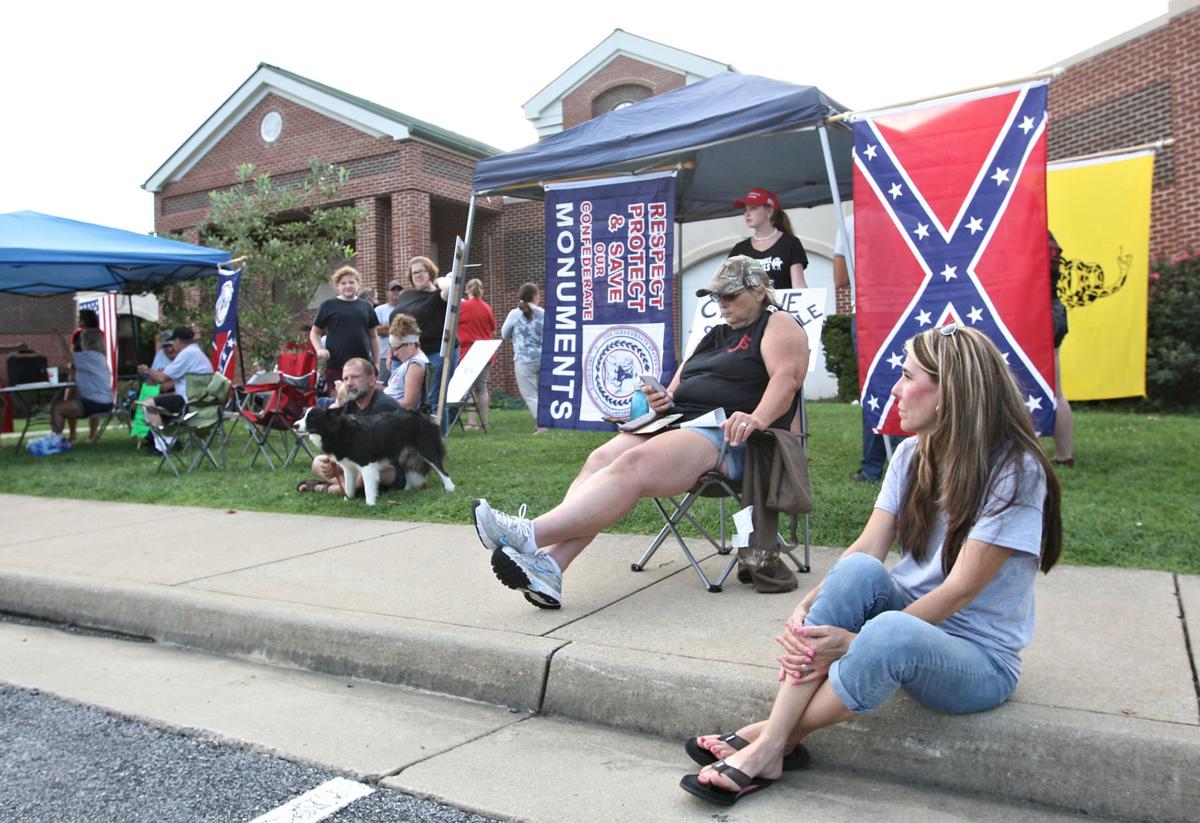 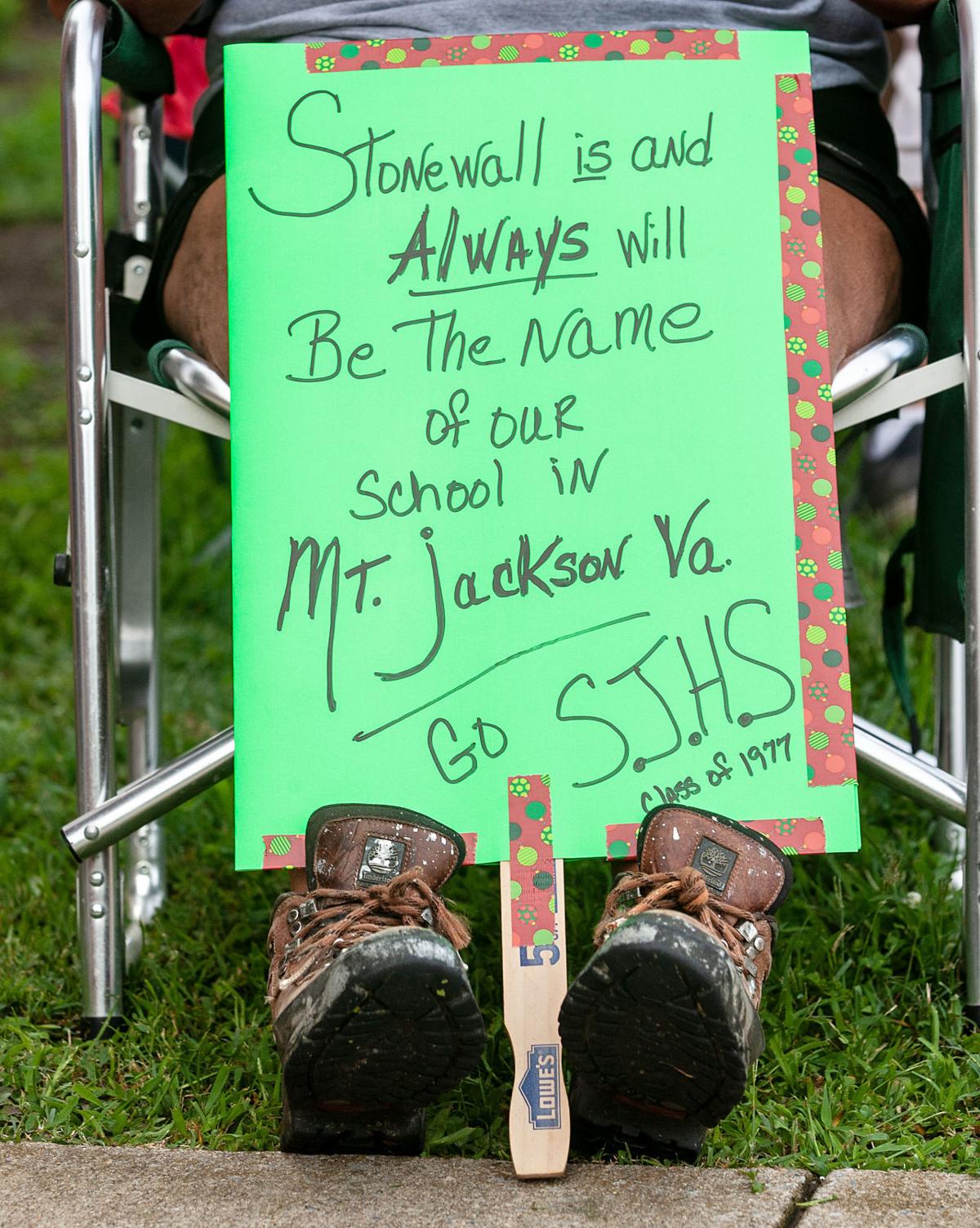 A protester' sign is propped up with a pair of boots outside the Government Center. 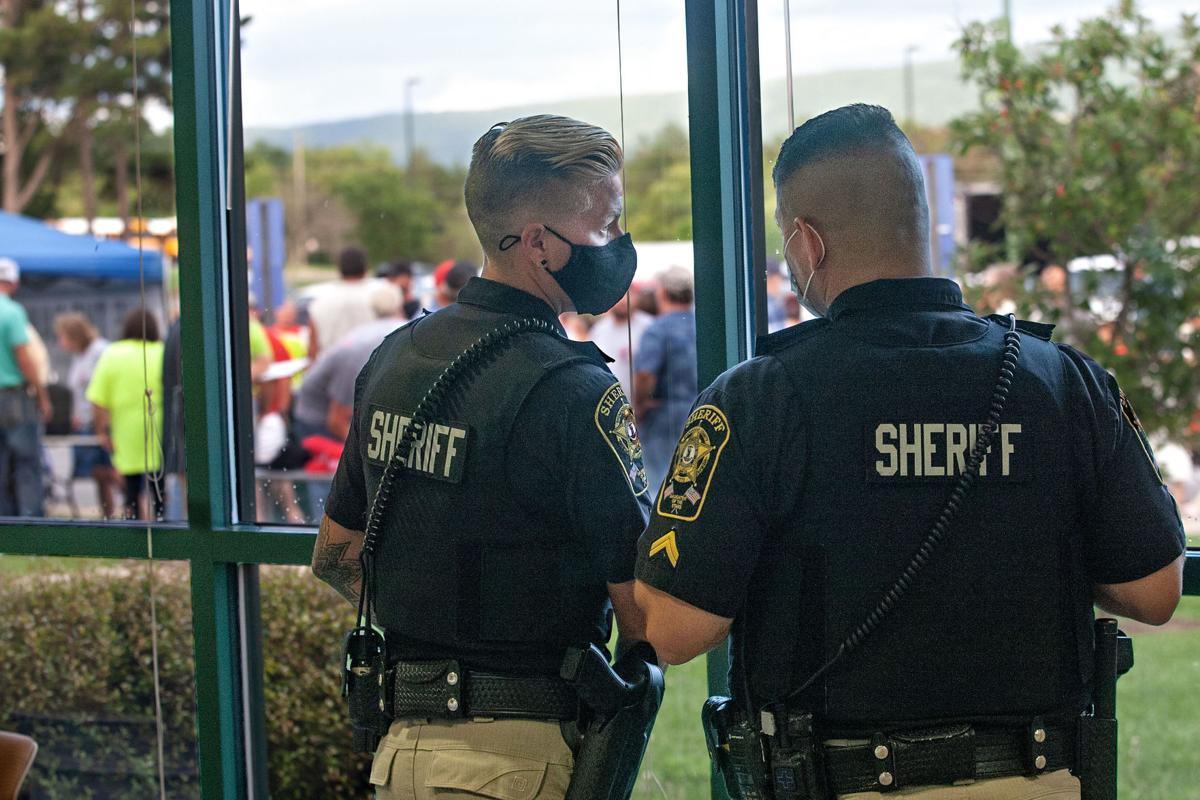 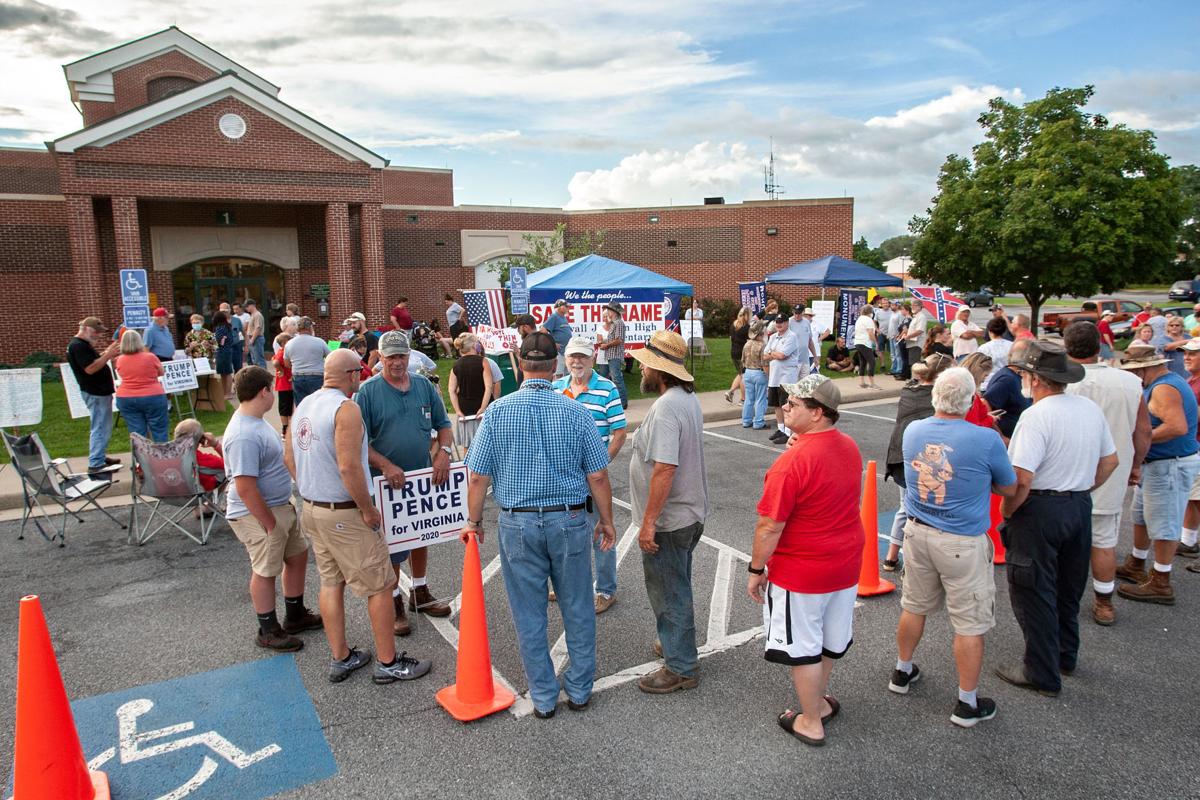 Protesters gather outside the Government Center in Woodstock on Thursday. 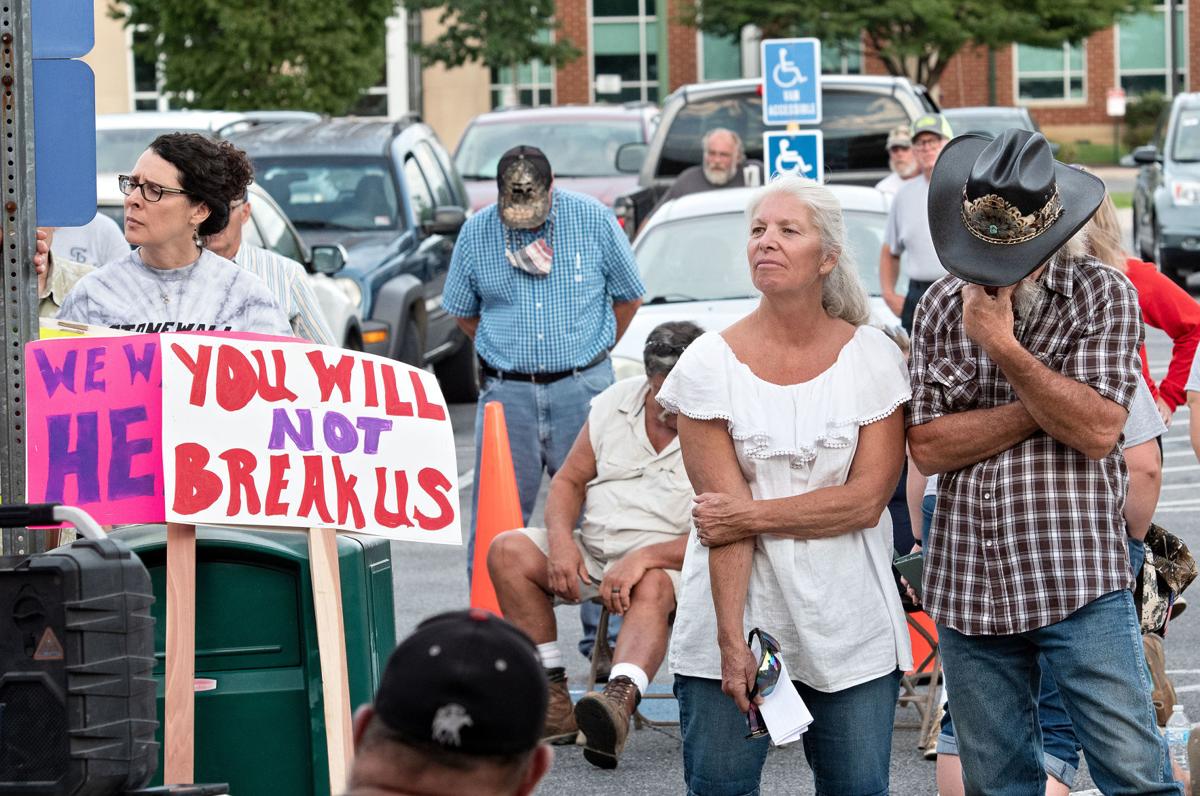 Protesters listen to comments being made during the Shenandoah County School Board meeting. 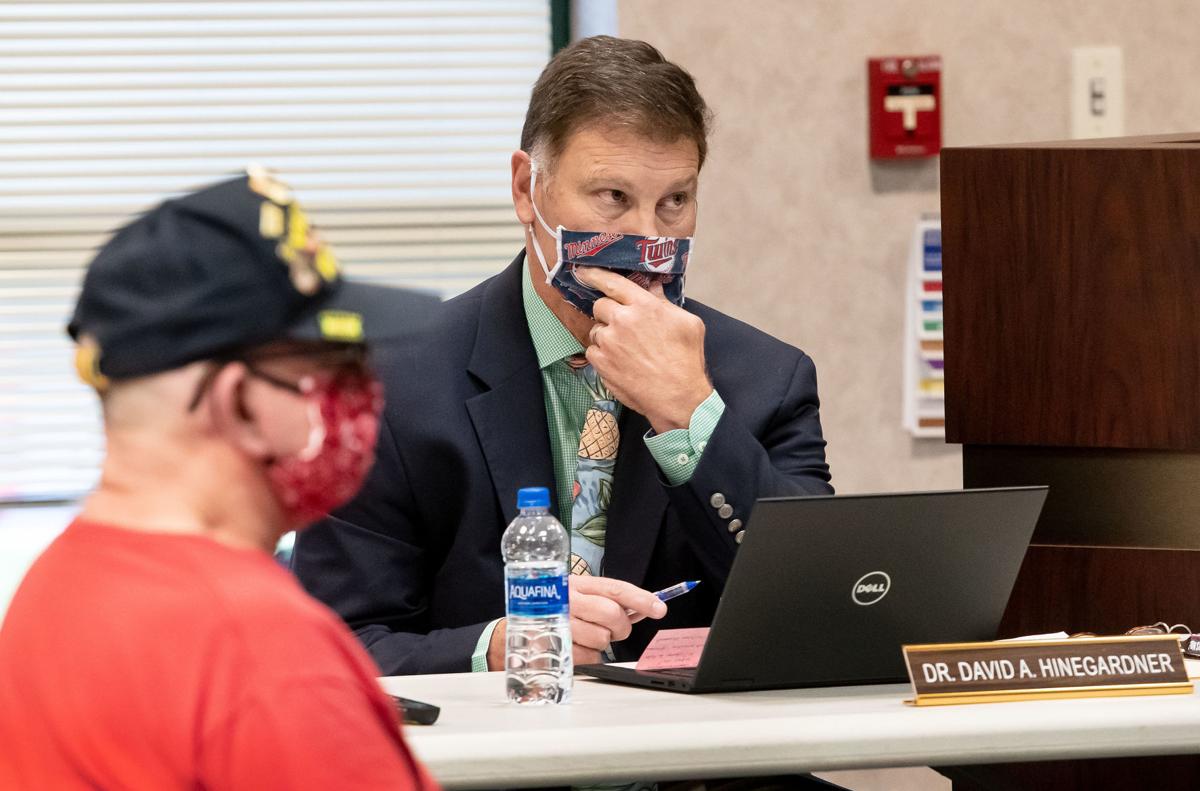 Todd Bynaker, left, of Mount Jackson, and Stacey Rinker, right, of Edinburg, sign documents in front of a Republican display where free flags were being given away.

Demonstrators and signs are displayed outside the Government Center in Woodstock on Thursday evening.

A protester' sign is propped up with a pair of boots outside the Government Center.

Protesters gather outside the Government Center in Woodstock on Thursday.

Protesters listen to comments being made during the Shenandoah County School Board meeting.

WOODSTOCK – Members of the community voiced their opinions about the renaming of Stonewall Jackson High School and Ashby Lee Elementary School at Thursday's Shenandoah County School Board meeting.

There were 14 speakers on the subject in the first public comments section of the meeting, and 11 more at the end of the meeting on the division's decision to go all-virtual this fall. Some people poke on both subjects.

Outside the School Board office building, about 80 protesters had gathered to listen to the meeting on a speaker. They brought signs as well as an American and a Confederate flag.

On July 9, the School Board voted 5-1 to rename the schools and change the mascot name of Rebels at North Fork Middle School due to a recent resolution the board passed condemning racism and affirming the division's commitment to an inclusive school environment for all.

The School Board did not take any further action on Thursday regarding the renaming of schools but did hear a draft for a plan to rename them.

Shenandoah County School Board chairman Karen Whetzel started the meeting by saying that schools Superintendent Mark Johnston was not in attendance due to a medical emergency.

Whetzel started things off with a speech of her own.

"As a board, we have strong values and beliefs that guide our decision," Whetzel said. "In addition to pursuing excellence in education for all of our students, we also value and respect all members of our learning community and believe that meaningful learning only comes when there are meaningful relationships. Among our many other considerations, we cannot ignore the fact that these values require an inclusive and welcoming school community for all.

"Our board has made the right choice, for the right reasons, to retire the school names and mascots that are contrary to our values and commitment to equity, and that fail to support all of our students and staff. We understand that this decision may be upsetting to some members of our community, as there were certainly strong views and thoughts expressed on each side of the issue."

There were speakers on both sides of the renaming schools issue, though most who spoke were against it.

Christie Thornton, a Black Stonewall Jackson graduate, said that she was against the renaming of the schools due to the financial impact it will have. It has been estimated that the renaming will cost $500,000.

"I grew up here and I experienced racism," Thornton said. "I did it at Stonewall and I can tell you with sincerity that never once did the name of the school ever play into that. It was the people that went there. ...I would hope, I would implore anyone on the either side of it to have that conversation, to talk about the fact that even though the this decision has been made, and evidently it is going to go forward no matter what anyone does, that you focus more on the reality of the money. The money that is being wasted in this for folks to feel better about themselves, because ultimately that is all it's going to do. It isn't going to make any Black child, Hispanic child, Asian child or white child be able to do any more or any better in life."

Many of those who spoke said that the School Board went against what many community members wanted.

"They weren't paying attention to what the people wanted," John Bost said. "I understand that the majority of Shenandoah County citizens don't want the name changed. That was not taken into consideration by the School Board. I think it was done in a wrong way and the decision should not have been made until the citizens of Shenandoah County was heard."

Some pointed out how quickly the School Board made the decision. Karen Kwiatkowski said the decision was made too fast.

"There was no process for deciding to change the name," Kwiatkowski said. "There was no rationale other than we want to do it. It will make us look like were virtuous. (The board) all agreed except thank God for board member (Marty) Helsley stood his ground. It's an embarrassment for you as members of this School Board."

Keven Walker, of New Market, said the name change is no longer the main issue in his opinion.

"At hand now is that we have a School Board, apparently, that does not respect our systems of government," Walker said. "Or worse, yet might not even understand it and uses their position to circumvent the will of the people, rather than enact the will of the people. Change the names or don't change the names, do what you're going to do through convincing the majority to join your cause not by trampling the rights of any of our county citizens. You cannot give voice to one citizen by challenging the voice of others."

Walker also said that the School Board and Johnston had failed the residents of the county.

"Throughout this name change debate many have commented on the character of Stonewall Jackson," he said. "It's not the character and beliefs of Stonewall Jackson that should be discussed by this county tonight, its the character and beliefs of the members of our School Board and our superintendent of schools. You have failed our county and the people to whom you answer to all of this. And you have not provided the courageous leadership on this complex issue that could have found a way forward without carrying division."

Emily Scott, of Woodstock, was one of those who supported the School Board's decision to rename the schools.

"I think our board is extremely courageous for doing the right thing," Scott said. "This isn't a matter of public opinion; it's a matter of right and wrong. I can't believe that in the 21st century I had to listen to a bunch of apologists' nonsense about Stonewall Jackson and Turner Ashby and Robert E. Lee. It's the 21st century people - that was 150 years ago – they lost. I want to thank the School Board members for making intelligent and moral decisions."

Whetzel also addressed a petition that was filed this week to prevent the School Board from moving forward with its decision to rename the two schools and a mascot.

"It is unfortunate that some members of our school community have decided to pursue legal action in response to our School Board's decision," Whetzel said. "Not only does this petition lack merit and misinterpret our board's policies and actions, it also appears to be an attempt to further divide our school and community. We firmly believe that this board has acted within its exclusive and constitutional authority and responsibility to supervise its schools.

"These proceedings will not delay our efforts to begin the renaming process. Rather than have school names and mascots that divide our students and our community, our efforts moving forward will be to find school names that unite us all."

The petition has been filed by local attorney Brad Pollack, who was one of the speakers and also one of the protesters standing outside the School Board office during Thursday's meeting.  Pollock is also a member of the  Shenandoah County Board of Supervisors.

"I'm here to do just one thing – to ask you to abide by the oath that you took when you assumed office," Pollack said.

He then read the oath and said that they were not doing what they promised to do.

"You are not supporting the Constitution of the United States and the Commonwealth of Virginia," Pollack said. "You are not faithfully or impartially discharging the duties encumbered upon you as members of the Shenandoah County School Board according to the best of your abilities. You need to start doing so or you need to allow one of your constituents to step up and take your place."

For both the high school and elementary school, an online form for new name suggestions would be created from Sept. 11-Oct. 31. The committees would gather additional input from their classmates, parents and the community.

The committees would meet either in-person with social distancing or virtually to narrow down a list of five school names and mascots for consideration.

A survey of community members and students would then be conducted to select the top three from the list of five. The committee would then take the list of top three choices and narrow it down to one recommendation of a school and a mascot to give to the Shenandoah County School Board for information and at a subsequent meeting for approval. The committee would present the names in writing to the School Board along with their reasons for suggesting each option.

For a new mascot at North Fork Middle School, there would be a committee of 10-12 students of varying grade levels and interests, selected by the principal and a teacher or administrator to serve as an adviser.

The North Fork Middle School committee would meet in-person or virtually and choose three potential mascot names. The three names would be put to a vote by the student body in November and the winning name would be announced after the results are finalized. The new mascot name would go into effect on Jan. 1.

The School Board is scheduled to vote on the plan in September. If the draft of the process is passed, there would be a public hearing in December or January and the School Board would vote on the new name at the January  meeting. The new names of the two schools would go into effect on July 1.

Shenandoah County School Board member Marty Helsley said he would like to see the timeline pushed back a year so that all juniors and seniors could graduate from Stonewall Jackson High School.

"I think the juniors who have purchased rings need some consideration since they spent money," Helsley said.

Shenandoah County School Board member Andrew Keller said he worries about how easy it will be to order new uniforms for all of the sport teams and the bands. He said usually you spread out the number of teams that can order new uniforms in a year.