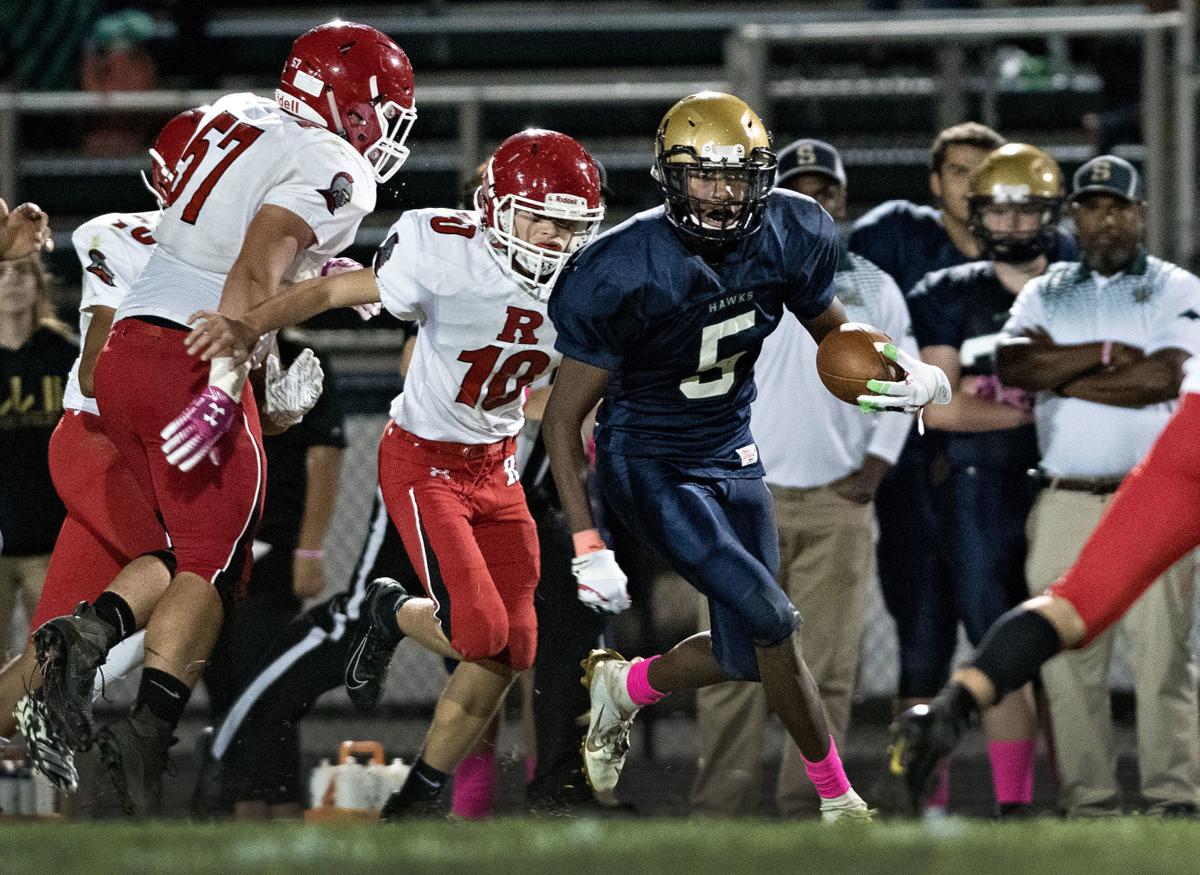 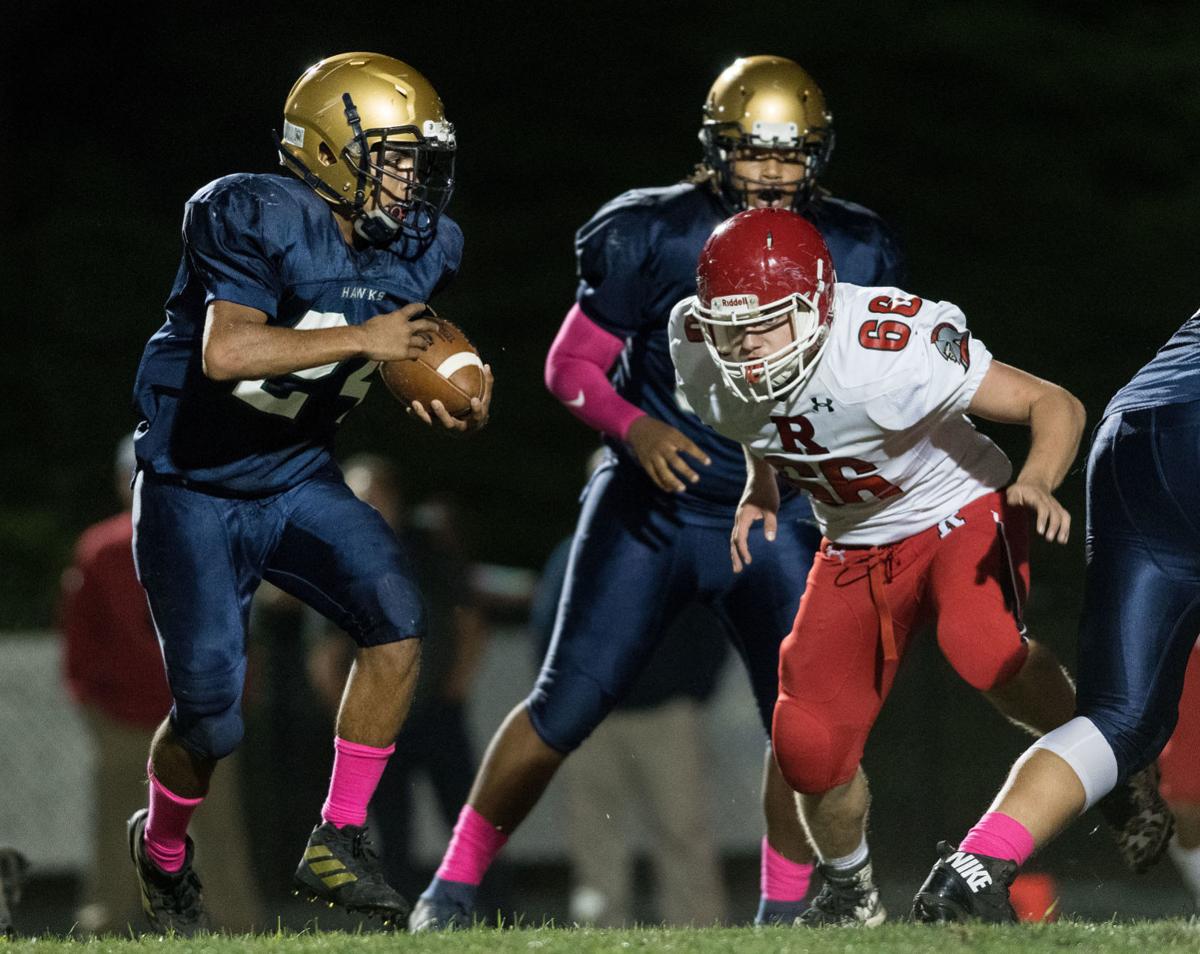 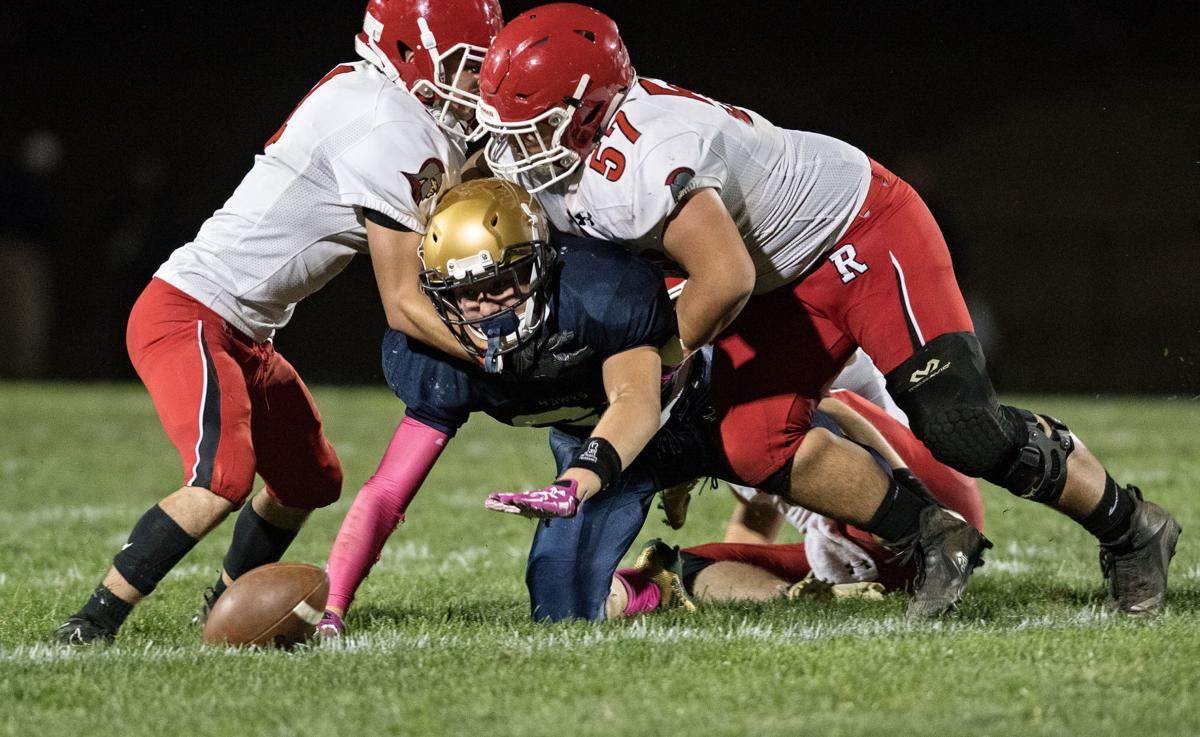 Skyline’s Anthony Domino fumbles the football as he is tackled by Riverheads' Aidan Miller, left, and Colin Armstrong, right. 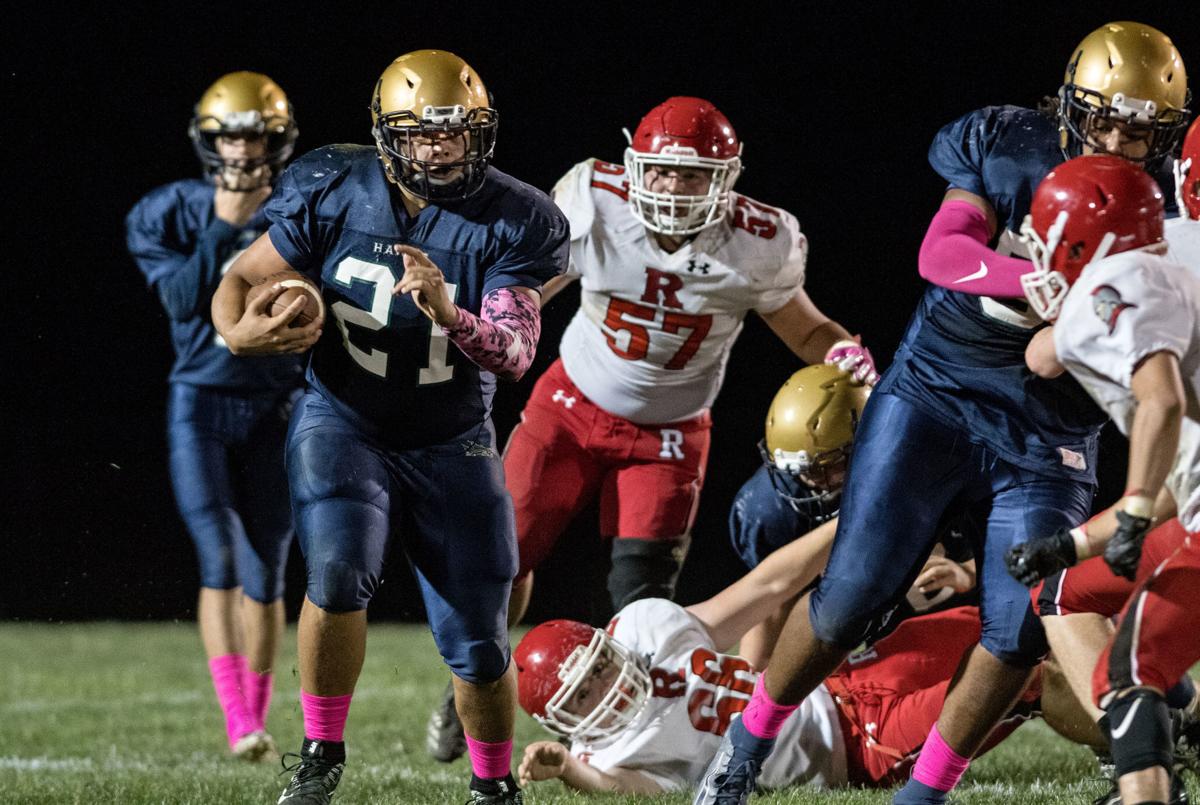 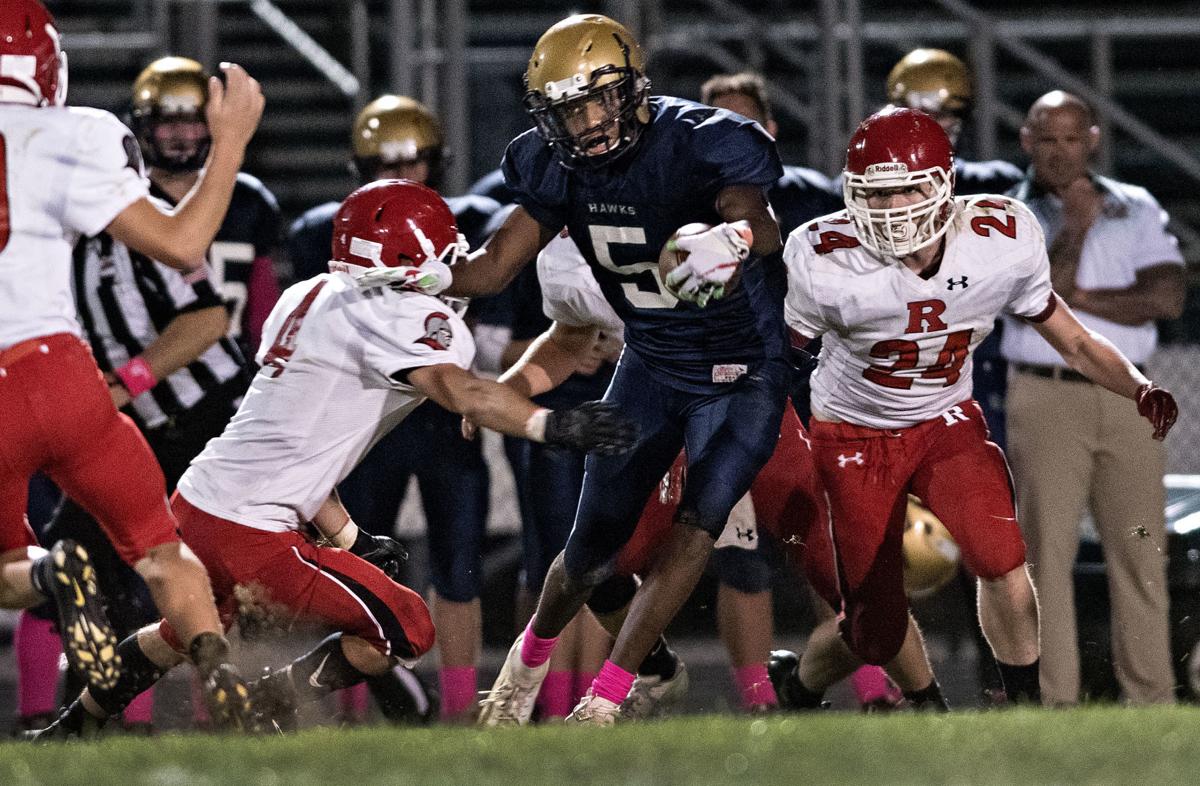 Skyline’s Marion  'Budder' Haley tries to avoid Riverheads' Aidan Miller, left, and Cole Burton, right, after a pass reception during a game last season. Skyline is hopeful they may be able to resume offseason workouts as early as July 6. 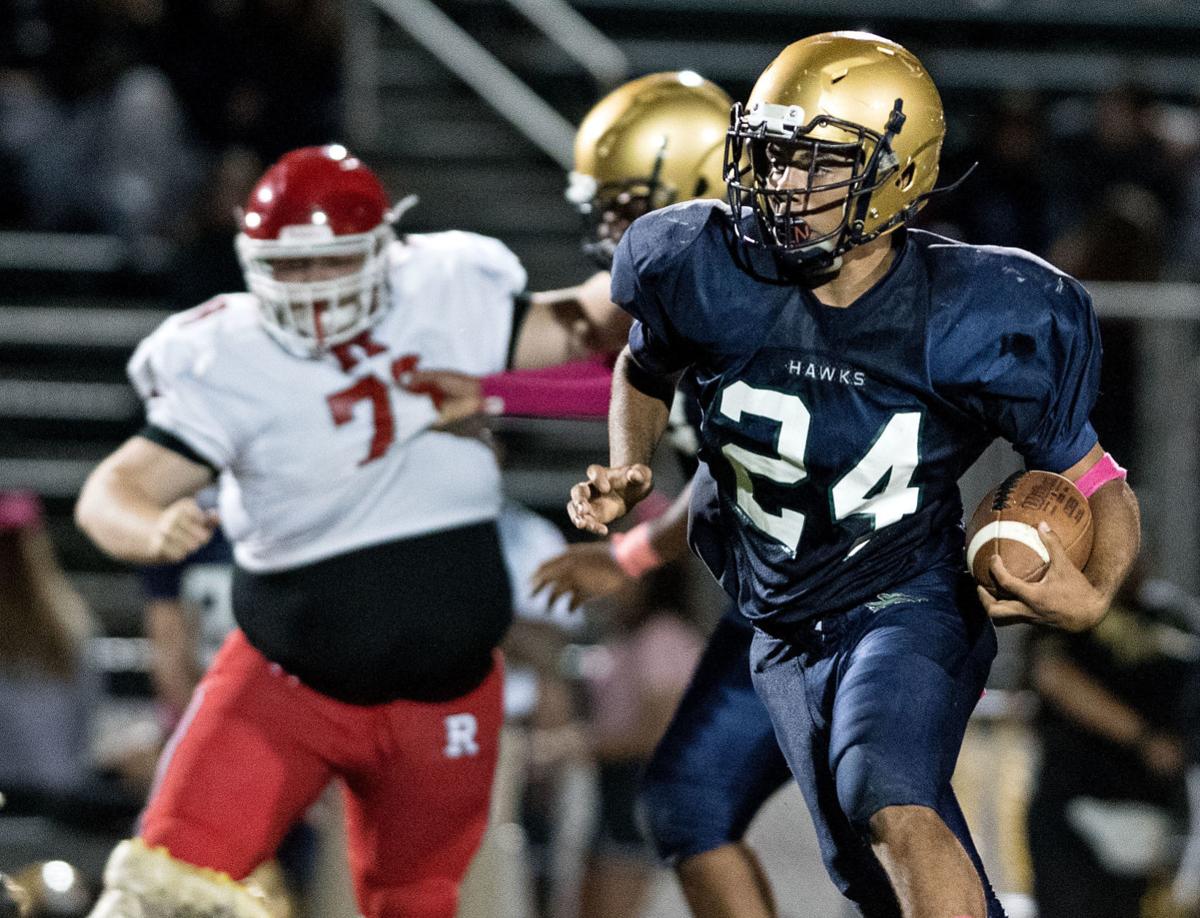 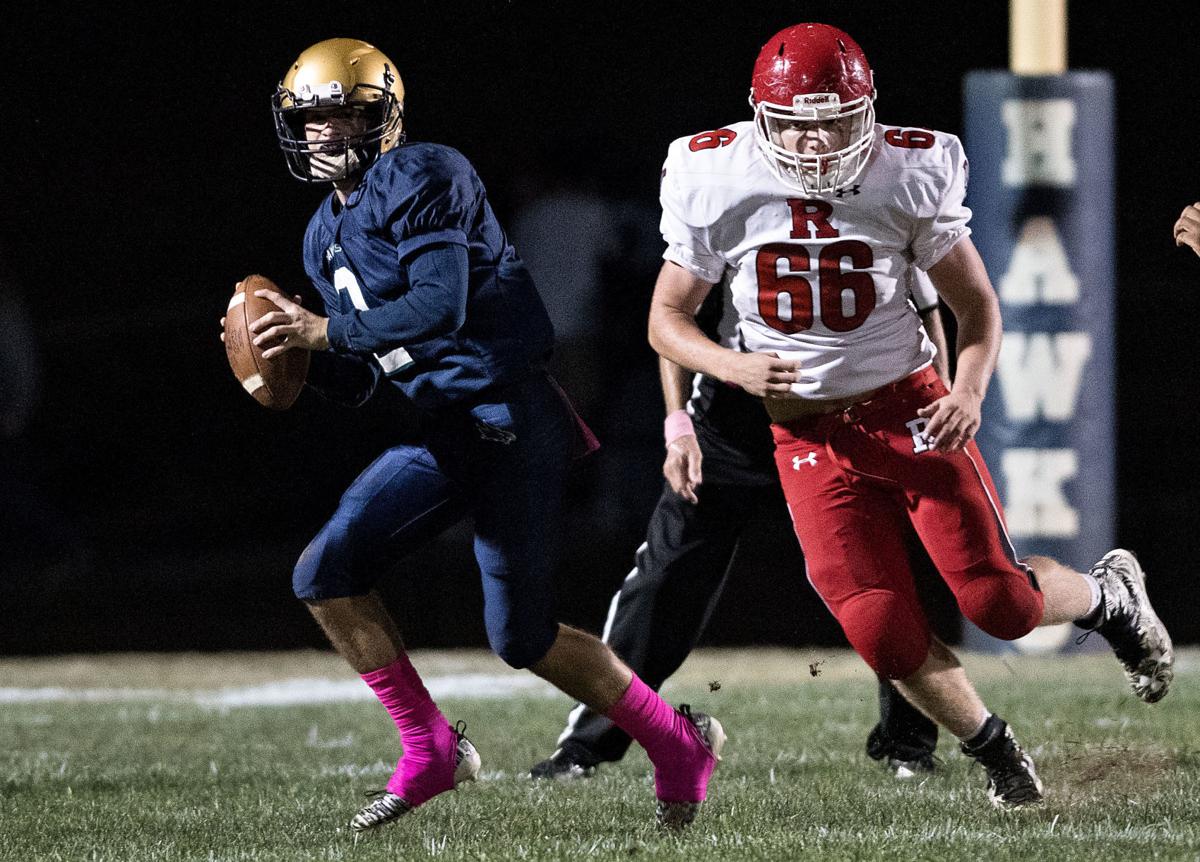 Skyline’s Blake Appleton scrambles in the backfield after being pursued by Riverheads’ Jameson Shover in an early season game last year. Appleton, a rising junior, and the Hawks could be back doing workouts and in the weight room within the next two weeks. 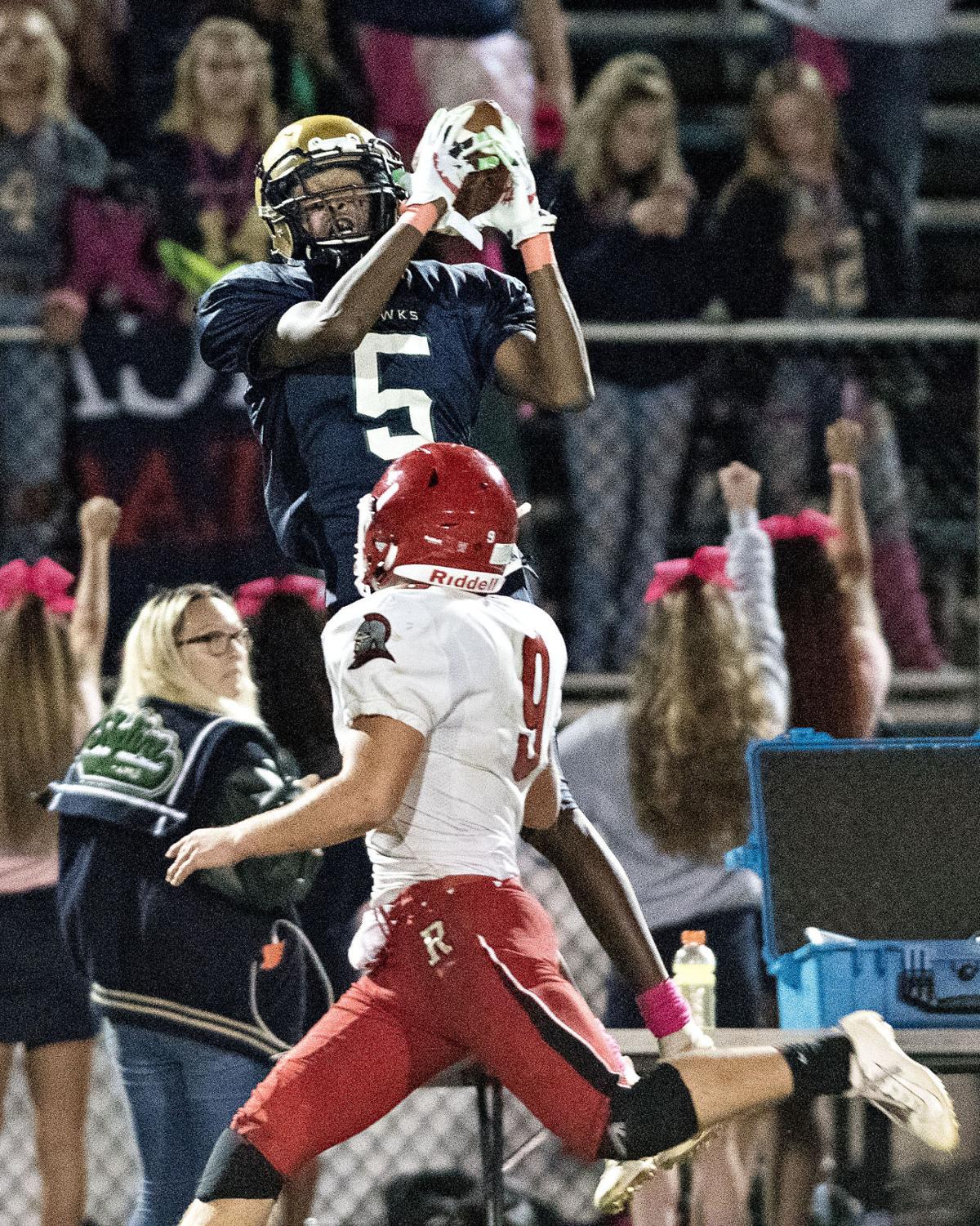 Skyline’s Anthony Domino fumbles the football as he is tackled by Riverheads' Aidan Miller, left, and Colin Armstrong, right.

Skyline’s Marion  'Budder' Haley tries to avoid Riverheads' Aidan Miller, left, and Cole Burton, right, after a pass reception during a game last season. Skyline is hopeful they may be able to resume offseason workouts as early as July 6.

Skyline’s Blake Appleton scrambles in the backfield after being pursued by Riverheads’ Jameson Shover in an early season game last year. Appleton, a rising junior, and the Hawks could be back doing workouts and in the weight room within the next two weeks.

FRONT ROYAL -- What members of Skyline’s football team considered to be their toughest three-game stretch of the regular season came to an end with the Hawks’ third straight lopsided loss on Friday night.

The latest setback came to Riverheads, the three-time defending Class 1 state champion, which ran over the Hawks en route to a 49-21 non-district win in the first-ever meeting between the two schools.

After opening the season 2-0 for the first time since 2012, Skyline limps into its Class 3 Northwestern District opener next week at Central having lost its last three games by an average of 32.3 points.

“We needed to get one (win) and we didn’t, so that’s disappointing,” Skyline coach Heath Gilbert said of a three-game stretch that included games against Class 4 opponents James Wood and Handley. “Really disappointed on that. We had to find a way but that didn’t happen. We can’t let this three-game losing streak bring us down, and that’s what we talked about at the end.”

Riverheads (5-0), which extended its winning streak to 16 straight with the victory, piled up 457 yards of offense -- all rushing -- on Friday and had three players top the 100-yard mark against Skyline (2-3). Junior running back Zac Smiley led the way for the Gladiators and their double-wing offense, rushing for 199 yards and three touchdowns on 21 carries. Cole Burton added 13 carries for 104 yards for Riverheads, and Cy Cox had 103 yards and a pair of touchdowns on 10 carries.

The Gladiators, who also forced four turnovers on defense, averaged 8.5 yards per carry.

“The trap was a problem for us tonight,” Gilbert said. “We did a good job at times wrong-arming, and then we’d get washed, so they could cut it back. That was frustrating. They do a good job, we were beating up the wing, so then that gives up a little more edge, so the tight end and the tackle can block down on our guy, which creates more space and we weren’t able to hold that edge.

“It was a great job on their part,” he added. “It’s pick your poison. We knew what was coming. The kids, I thought they did a great job of getting prepared. Really proud of them for that.”

After falling in an early 14-0 hole in the first quarter, Skyline twice cut the deficit to a touchdown in the first half to keep within striking distance.

The Hawks had a quick answer for Riverheads’ second touchdown of the game when sophomore quarterback Blake Appleton hit Logan Maiatico on first down for a 60-yard touchdown pass to cut the Gladiators’ lead in half with 2:44 left in the first quarter.

Trailing 21-7 late in the first half, Skyline put together a 13-play, 63-yard scoring drive that ended with David Carter’s 9-yard touchdown run with 1:20 left in the second quarter.

Turnovers and a key Riverheads touchdown drive right before the half sucked the life out of Skyline from there.

Given the ball at their own 25 with just 1:17 to work with after Skyline’s second score of the game, the Gladiators got back-to-back runs of 26 and 46 yards from Smiley and Burton to key a backbreaking drive that ended with quarterback Elijah Dunlap’s 1-yard plunge into the end zone with five seconds left before halftime.

It was the start of 21 straight points for Riverheads, which forced three Skyline turnovers on the Hawks’ first three possessions of the second half -- all on the Gladiators’ side of the 50-yard line -- and followed the first two with scoring drives to open up a 42-14 lead in the third quarter.

Skyline, which finished with 367 yards of offense, including 274 passing, also turned the ball over on an interception at the Riverheads’ 12-yard line while trailing 14-7 early in the second quarter.

“We moved the ball but we turned it over at the worst time,” Gilbert said.

Appleton had a busy night quarterbacking the Hawks’ offense and completed 30 of 40 passes for 274 yards, two touchdowns and three interceptions. Marion Haley had 14 receptions for 124 yards and a 9-yard touchdown grab with 5:19 left to play, and Maiatico -- who had a 52-yard run on Skyline’s third possession of the game that ultimately ended with Appleton’s first interception -- finished with 168 yards of total offense, including 109 yards receiving on 10 catches.

Friday’s matchup was quite the contrast of offensive styles, with Riverheads attempting just two passes -- both incompletions -- all game while using Smiley as a battering ram against the Hawks’ defense. Smiley, who scored the Gladiators’ first three touchdowns, averaged 9.5 yards per rush and had nine carries of 10 or more yards.

“He’s strong,” Gilbert said of Smiley. “When we scouted them, I happened to be right on the fence when they were walking out and you could see his glutes and hamstrings and his arms. He’s put his work in. He was all-state for a reason and he did a good job tonight. A couple times he ran through us, we had him. There’s no arm tackling him.”

Skyline next turns its sights on Central, a Northwestern District newcomer that holds a three-game winning streak over the Hawks dating back to 2016.

“I love these kids, they’re working hard and we’re gonna bounce back,” Gilbert said. “We have a new season. We’re starting our district schedule, starting with Central at their place and we’ve got to be ready to rock and roll. They’re a tough football team and we’ve gotta be ready to roll.”