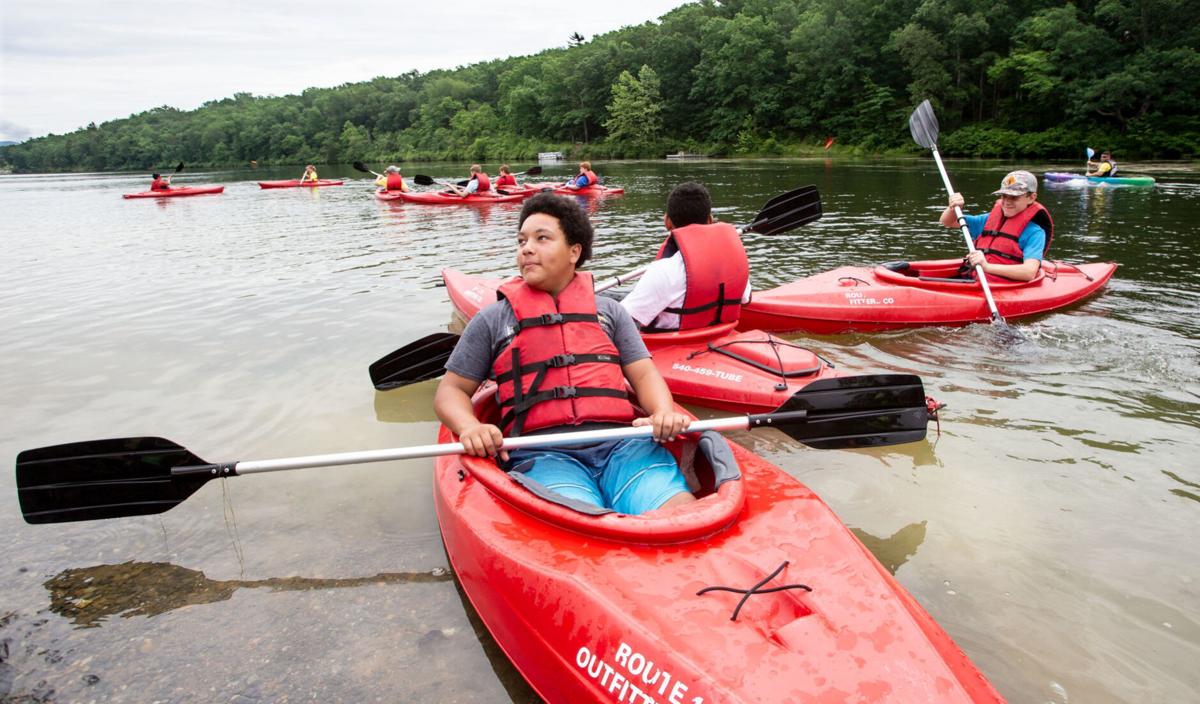 A.D. Carter, 14, of Strasburg rests his kayak on the shore of Lake Laura after his introduction to the sport on Thursday while attending the Shenandoah County Sheriff’s Camp. 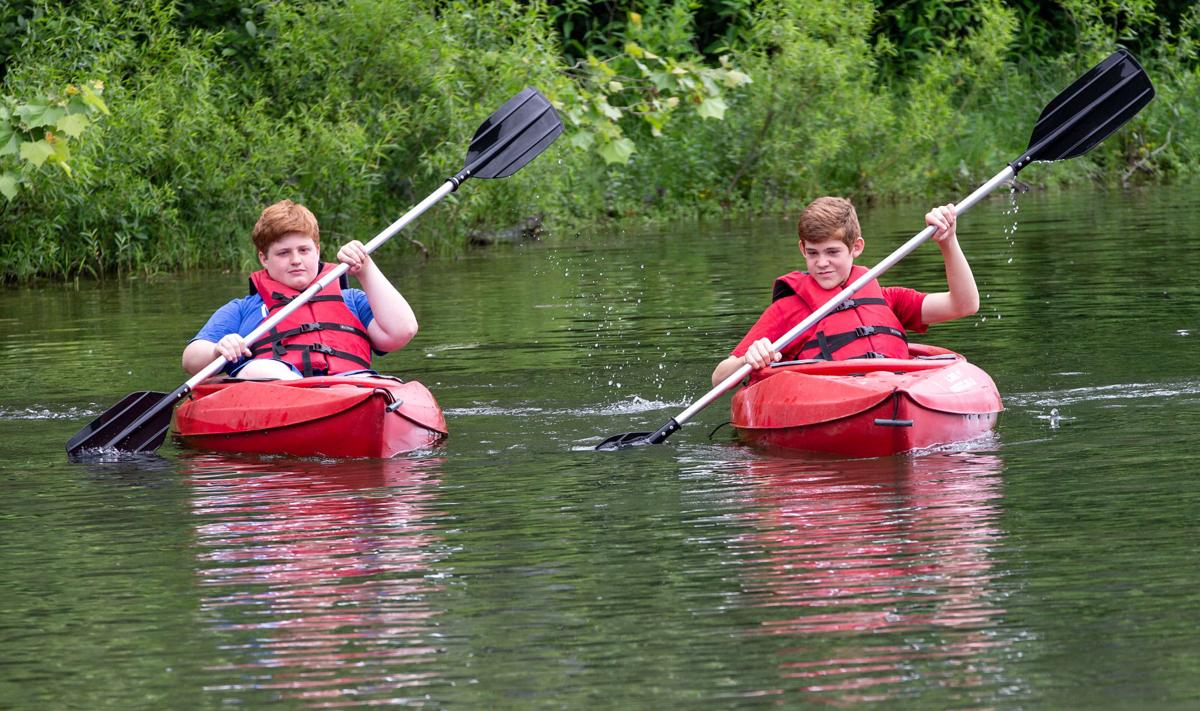 Sheriffs camp participants Ben Mumaw, left, of Woodstock and Haiden Click, right, of Edinburg maneuver their kayaks in the lake on Thursday. 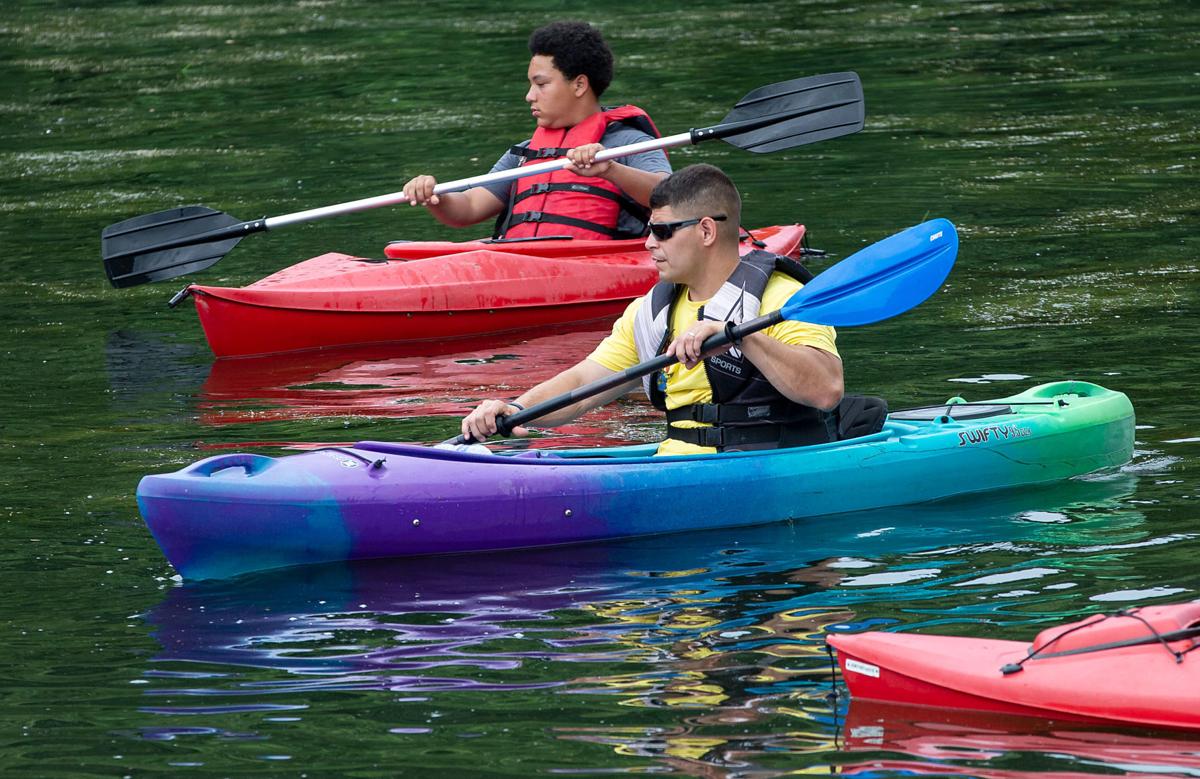 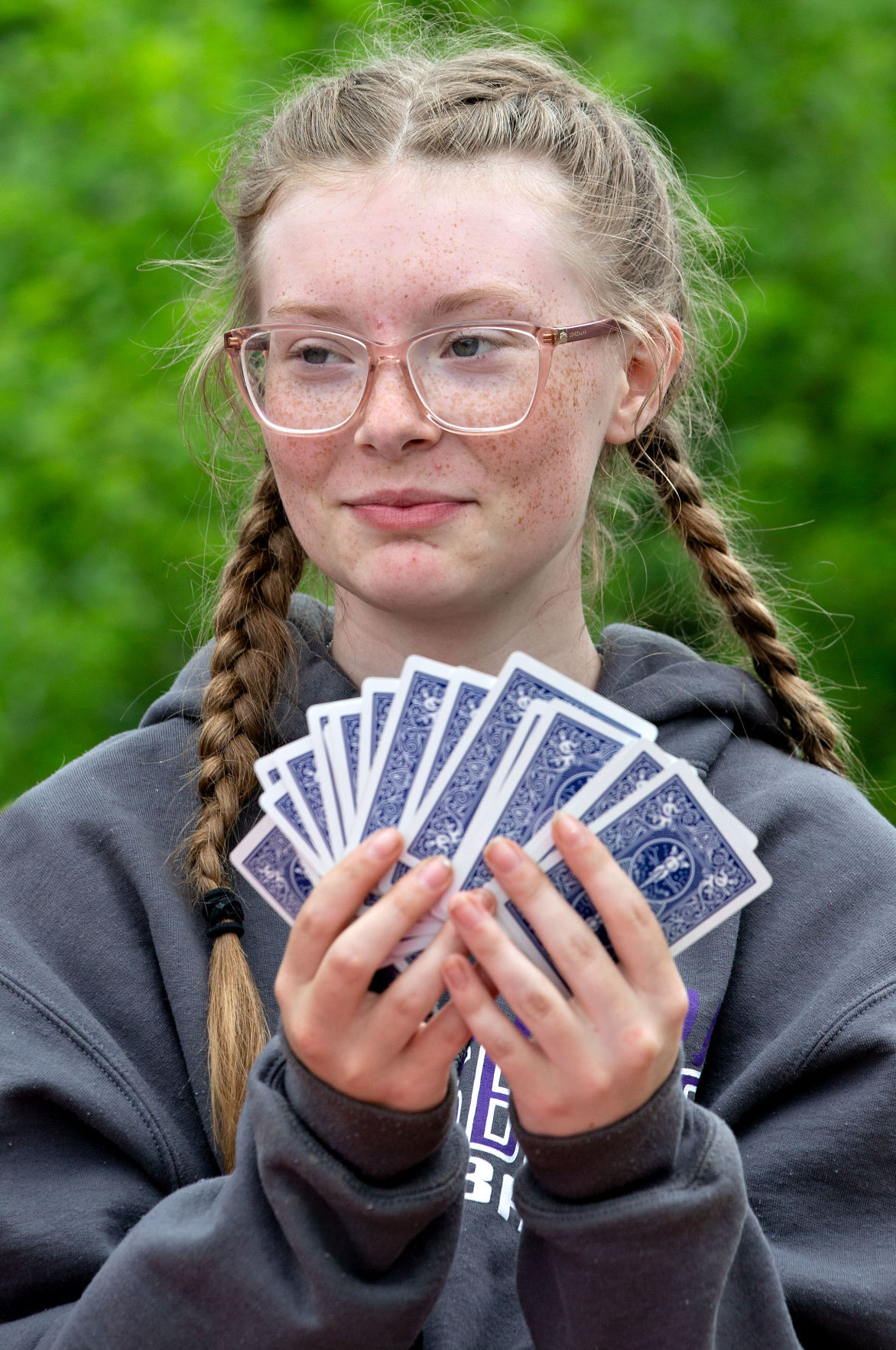 Taylor Lutman, 13, of Strasburg plays a game of cards with friends along the lake.

A.D. Carter, 14, of Strasburg rests his kayak on the shore of Lake Laura after his introduction to the sport on Thursday while attending the Shenandoah County Sheriff’s Camp.

Sheriffs camp participants Ben Mumaw, left, of Woodstock and Haiden Click, right, of Edinburg maneuver their kayaks in the lake on Thursday.

Taylor Lutman, 13, of Strasburg plays a game of cards with friends along the lake.

ORKNEY SPRINGS — At first, there was some trepidation among the campers.

During the school year, they had been mostly learning remotely, and the Youth Leadership Camp put on by the Shenandoah County Sheriff’s Office was one of the first opportunities they had had in over a year to hang out with a large group of people.

But after a display of tactical gear — involving flash bangs and a taser — their nervousness went away. From Sunday night to noon Friday, 23 middle schoolers participated in the camp held at Shrine Mont in Orkney Springs.

“It was like it’s on now,” said Sgt. Whitney Mauck, supervisor of the School Resource Officer unit within the Sheriff's Office.

It was the 10th year for the camp, which was cancelled last year because of the COVID-19 pandemic.

Chosen by school staff and the school resource officers, the campers are students who had displayed leadership qualities throughout the year.

“It’s just a really good experience, not just for the kids but for the SROS too, to build those relationships,” Mauck said.

In addition to the tactical gear demonstration, deputies showed the campers how to apprehend a suspect and process a scene for evidence.

Traditional camp activities such as kayaking, playing kickball and eating s’mores around a campfire also took place during the week.

The camp allows students to see law enforcement officers without their uniforms, weapons and other gear, Macuk said. If they become more familiar with the officers, students may be more likely to approach them if there is any impending danger or threat, Mauck said.

“For them to see us as human beings, and not walk around with our guns and badges...we’re just people,” Mauck said. “They learn about our families, we connect on a different level, and there's something to be said about that.”

The interpersonal connection "got real" earlier in the week as tears were shed during a discussion on mental health. Mental health problems have increased drastically, especially among youth, Mauck said.

One of the camper's best friends committed suicide about two months ago, Mauck said. The campers and the SROs talked about the difficulties of isolation and the importance of checking on people who they haven't seen or heard from for awhile.

Campers A.D. Carter and Willow Musterman both said they were enjoying their time, especially since the food choices included french toast, bacon and fruit for breakfast.

But they were also impressed with how much goes on behind the scenes with SROs and law enforcement officers.

“Half the time you don’t even realize what’s going on,” A.D. said, as SROs can be working to help a student with a problem but still find time to greet other students.

“It’s a lot to deal with at a time,” Willow said of the SROs helping students. Some tasks of police work, like collecting evidence at a scene, are a little bit more involved than one may expect, she added.

“We do need to talk to people,” A.D. said about what he learned from the mental health discussion.

School Resource Officer Master Deputy Colton Mannich said the camp has been “tons of fun.” Master Deputy Shane Bollinger added students in the past have gotten scholarships by listing camp attendance on their resumes.

On Thursday, the last night of the camp, Mauk said the students were being told there was a book event happening — an activity some of the campers were less than enthusiastic about.

But, instead, they got a surprise dance party complete with a pavilion decorated with a strobe light.

“Last year was hard, because we didn’t get to do it and this year was just a reminder of don't take things for granted, because of how great it is,” Mauck said. “It’s been a good reminder for everybody how great of an opportunity we have to do this with these kids.”