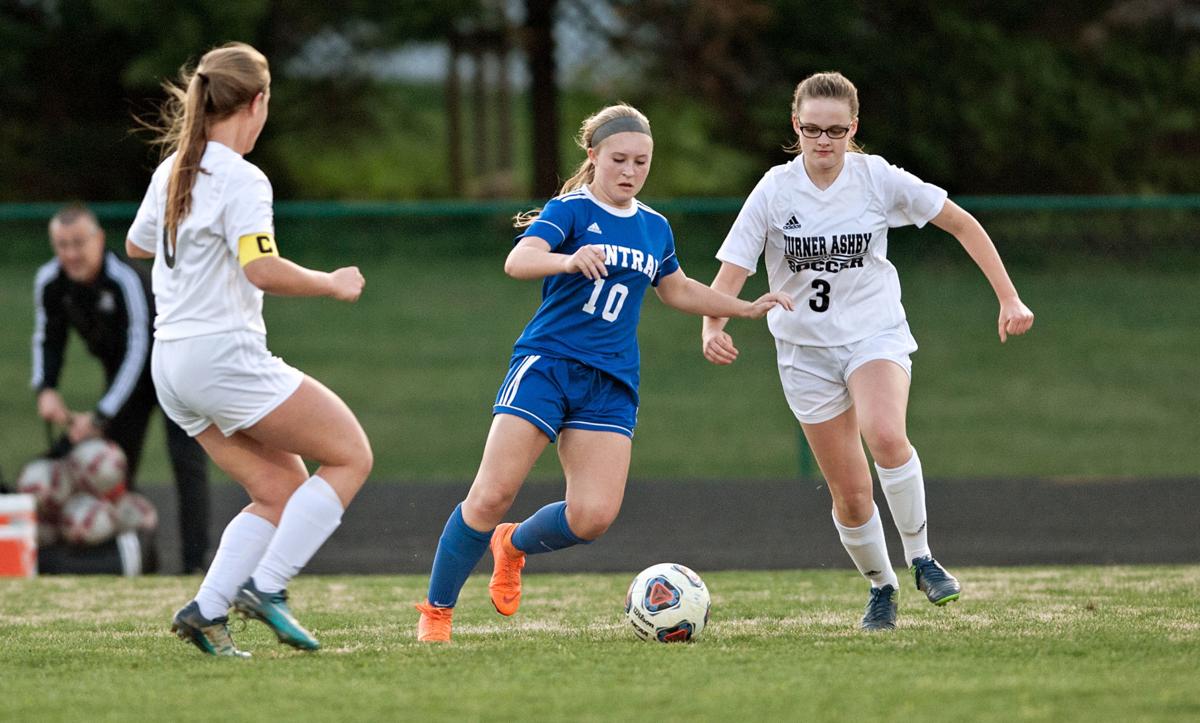 Central’s Hannah Dellinger splits Turner Ashby defenders Kara Longenecker, left, and Reese Pangle, right, during their game last season. Dellinger is one of six Central seniors who were key contributors to the program. 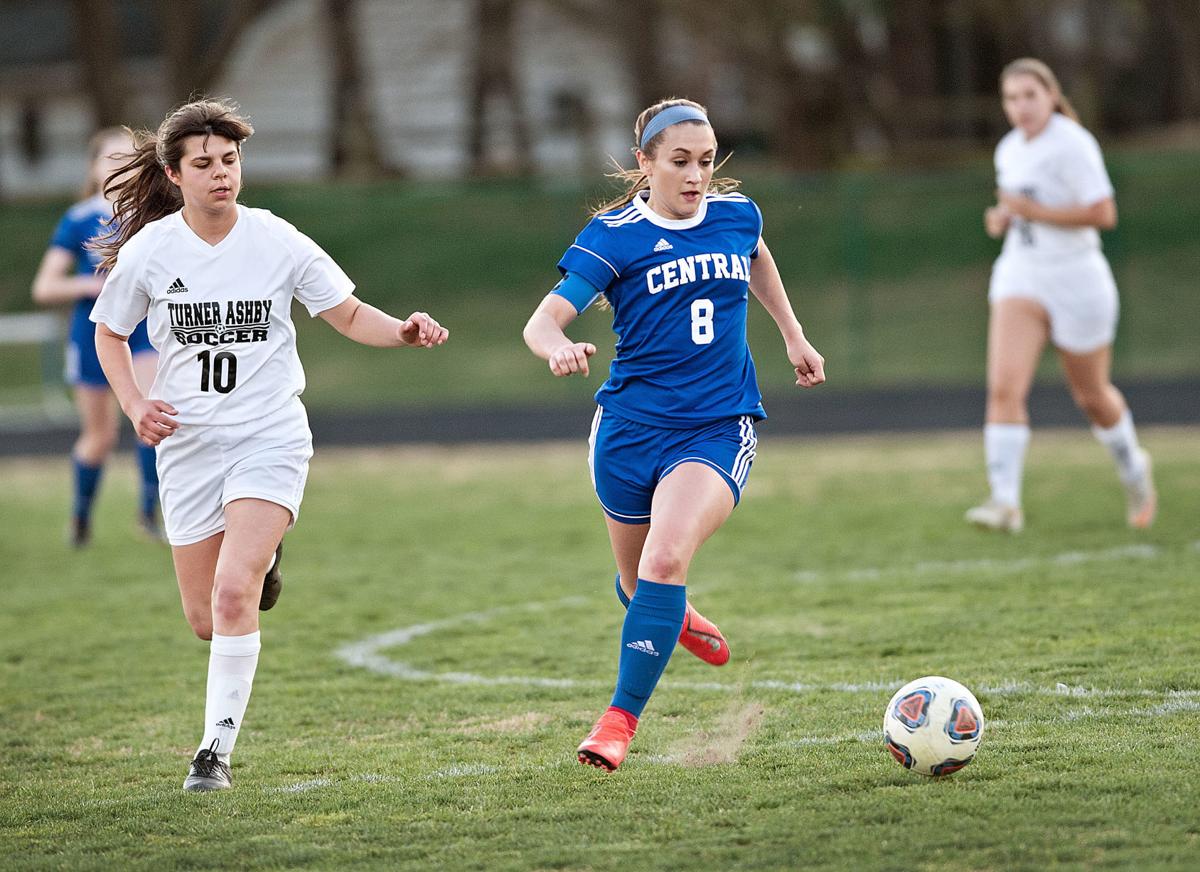 Central's Gracie Foltz (8) and Turner Ashby’s Grace Mowery chase down a ball during a game last season. Foltz was a team captain and one of six seniors on this year's squad. 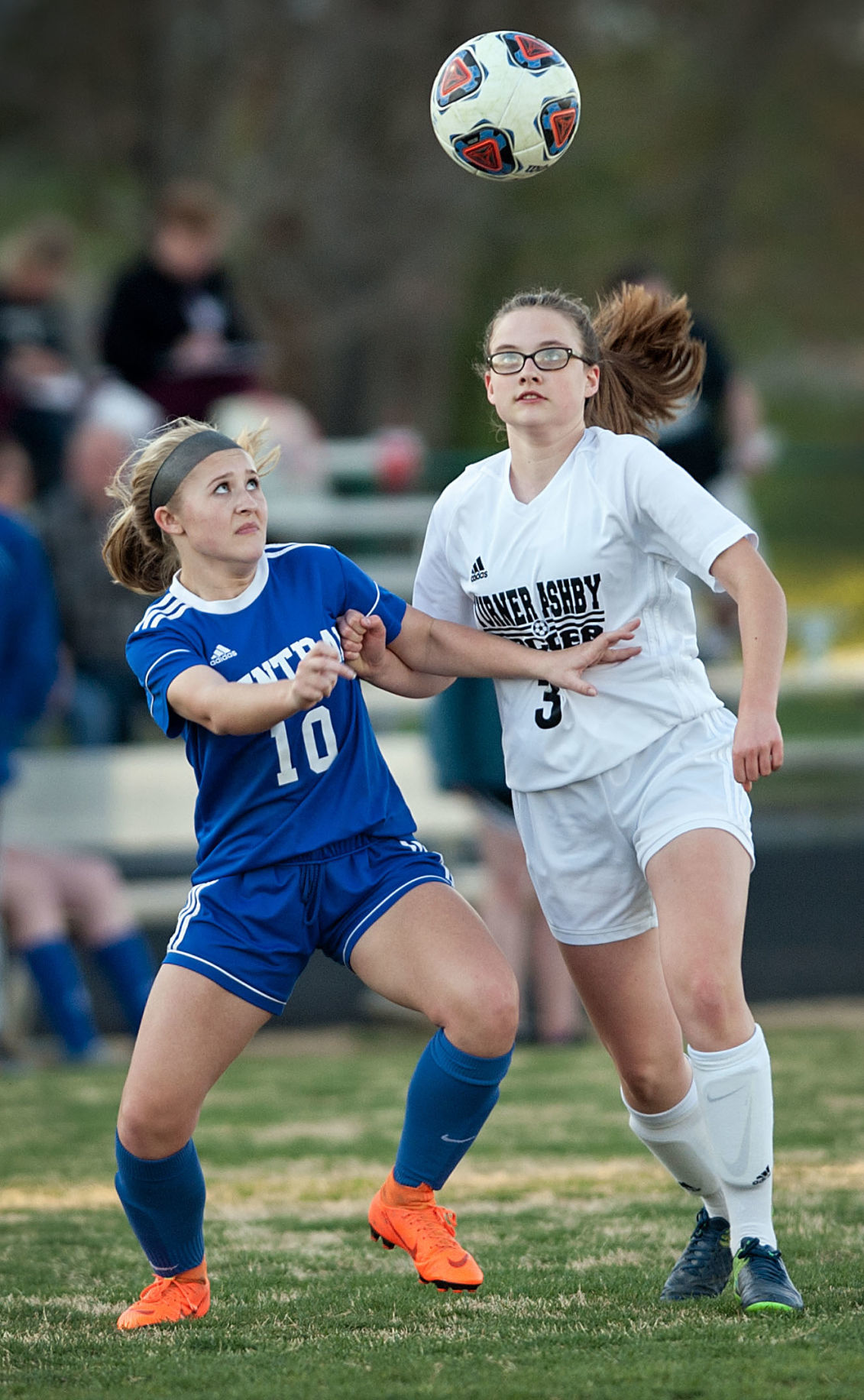 Central’s Hannah Dellinger (10) and Turner Ashby’s Reese Pangle eye the ball during a game last season. Dellinger was Central's top returning scorer this season, which was canceled due to the COVID-19 pandemic.

Central’s Hannah Dellinger splits Turner Ashby defenders Kara Longenecker, left, and Reese Pangle, right, during their game last season. Dellinger is one of six Central seniors who were key contributors to the program.

Central's Gracie Foltz (8) and Turner Ashby’s Grace Mowery chase down a ball during a game last season. Foltz was a team captain and one of six seniors on this year's squad.

Central’s Hannah Dellinger (10) and Turner Ashby’s Reese Pangle eye the ball during a game last season. Dellinger was Central's top returning scorer this season, which was canceled due to the COVID-19 pandemic.

Central’s six girls soccer seniors have left a definite mark on the program.

“This is a group of kids that I’ve probably coached some of them since travel since they were 10 years old,” Kim Dellinger said. “Some of them they just started in high school. So collectively they’ve been together and they’ve known each other, and a lot of them are a part of friend groups. So as seniors, they become the head of the team, because everybody looks up to them and respects them because they’ve seen them come up through the program over the years. So they were the lifeblood of the team this year.”

Foltz said that one of the most memorable moments of her career was playing against Stuart Draft in the regional tournament her sophomore year.

“We went and played Stuarts Draft every year for regionals, but (sophomore year) we went into overtime – both overtimes,” Foltz said. “And then the last couple minutes they got a (penalty kick) and scored and we lost 1-0. That was a memorable game for us. It was really hard. We were really excited because ultimately we thought having (2019 Central graduate) Kendall (Herbaugh), if we would have went into PK’s for both teams to determine the winner we would have won.”

She said it was also special playing against Strasburg because she transferred from Strasburg to Central as a freshman and knew most of the players on the Rams’ squad.

Foltz, who is a defensive standout, said she loves the aggressiveness of the sport.

“It’s an aggressive game,” she said. “A lot of people wouldn’t think so. But the people that do play know that, or people that watch know that it gets pretty aggressive sometimes. But it’s just fun to play and fun to learn.”

Foltz, who led the team with four assists last season, said she loves playing defense and knowing that she can play a role in keeping teams from scoring.

“I think defense is interesting because instead of scoring goals I get to save goals,” Foltz said. “When I played in the very back as the center back I was the last person before it got to our goalie. So it was either up to me or up to her. So I think just the adrenaline, it got really exciting back there. It’s just easy for me to see the field and help everybody else from the back to up front because I can see everything from back there.”

Johnston also plays defense and said she loves to make plays from a defensive position.

“I like the fact that you can see the whole field at once,” Johnston said. “So you can see the players coming down the field, and I can prepare myself and position myself. I think that’s why I like it because I’m a very prepared person. It’s like I can calculate my use from back there to try to stop them from scoring goals.”

Kim Dellinger said that Julianna Baker has been a strong defender for the Falcons.

“She’s just very fast,” Kim Dellinger said. “She’s got a good leg. She takes really good shots in practice. But she was a player that wanted to distribute the ball all the time. We didn’t figure out until her junior year that she was a very, very good defender. And with her speed, she could keep up with anybody that was coming on offense.”

Kim Dellinger said that Holsinger was a disruptive force on defense as well.

“She only came to us in her junior year,” Kim Dellinger said. “I think she started playing varsity and she has a lot of energy. She disrupted a lot of plays and that was very good. She ended up playing a stopper position, and she was able to keep plays from developing a lot of times.”

Kim Dellinger said that Laura Spackman did a little bit of everything for the team. She could play offense, defense and helped out some at goalkeeper in the offseason.

“She was kind of a utility player that we could play sometimes on offense,” he said. “She knows how to compete well. She knows how to give give-and-goes. She knows the mechanics of the game very well. So she was very helpful in that aspect.”

Hannah Dellinger was the team’s top returning scorer. Last year she had seven goals and three assists. She said her favorite memory was scoring the game-winning goal in both games last year against Madison County. Both games went to overtime with Hannah Dellinger sending the Falcons home with a victory.

She said that playing with the team has been a special time for her.

“It was really a group of girls at Central that made it worth the while,” Hannah Dellinger said. “The team, they just made it so much more than a sport I wanted to be in. And not just socially but also to play and be a part of something that was more like a family than a team.”

Hannah Dellinger said that having her father as a coach has been special and she wouldn’t trade it for the world.

“He’s been my coach through soccer,” Hannah Dellinger said. “He coached me in cross country. He coached me through all attributes in sports. But he’s also been able to coach me in life and he definitely has been one of the biggest influences on my sports career, and my development as a kid. We’ve had our tough times when I was in middle school, trying to figure out the perfect relationship for on and off the field, and trying to figure out where he is a coach and where he is a parent. But it’s definitely been something we’ve worked out, and we’ve been able to maintain a healthy and happy relationship on and off the field.”

Johnston said that she plans to attend the University of Virginia and she hopes to play intramural soccer at the school.

“I think I might play intramurals at least because I can’t really imagine not playing soccer at all,” she said. “And I think that would be a fun way to still play it, but also still give me time to focus on my school work.”

Foltz said she plans to attend Lord Fairfax Community College for a year and then transfer to a four-year school. She said she is hoping to coach her younger sisters’ recreational soccer teams this summer and be able to stay involved with the sport that way.

Hannah Dellinger is planning to attend Eastern Mennonite University in the fall and play soccer for the Royals.

She said not being able to play her senior season at Central, due to the COVID-19 pandemic, played a part in her decision to play in college.

“I still wasn’t very sure if it was something I wanted to pursue,” Hannah Dellinger said. “Because it’s always been something I wanted to pursue, but it was more like should I focus on my studies and see if I can handle that first? But not getting to have a senior season has really played a role in me deciding to play in college. It was really heartbreaking for me. I still want to have that year and have that next year and that next year to keep playing.”