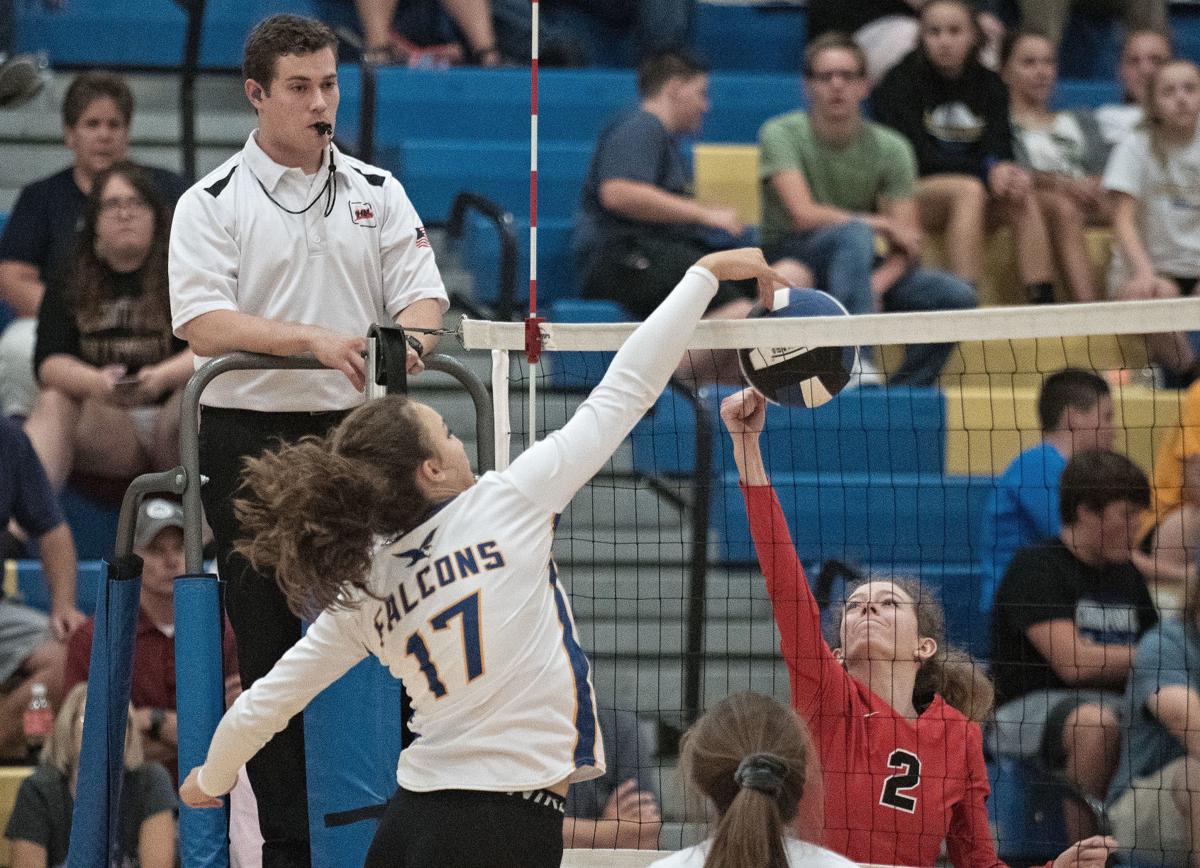 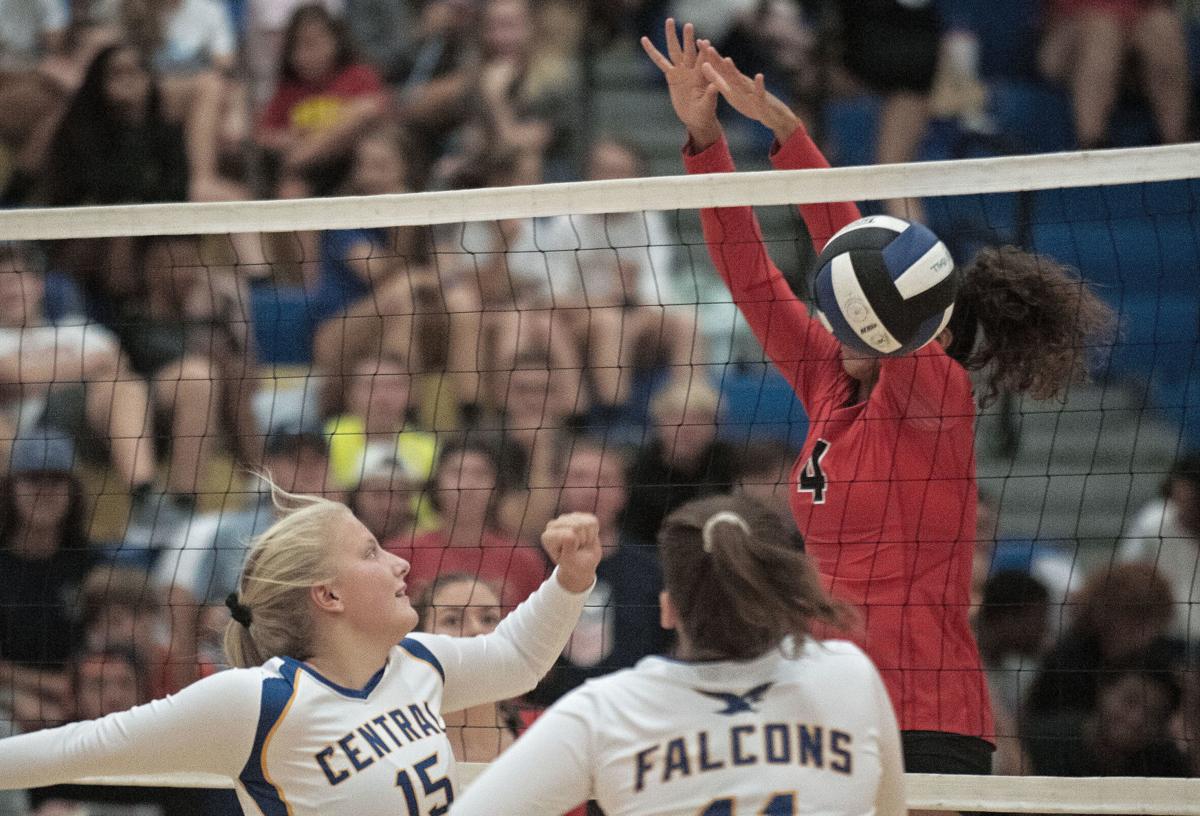 Central’s Emily Funkhouser, left, races to try and dig the ball out of the net as George Mason’s Sydney Longer defends. 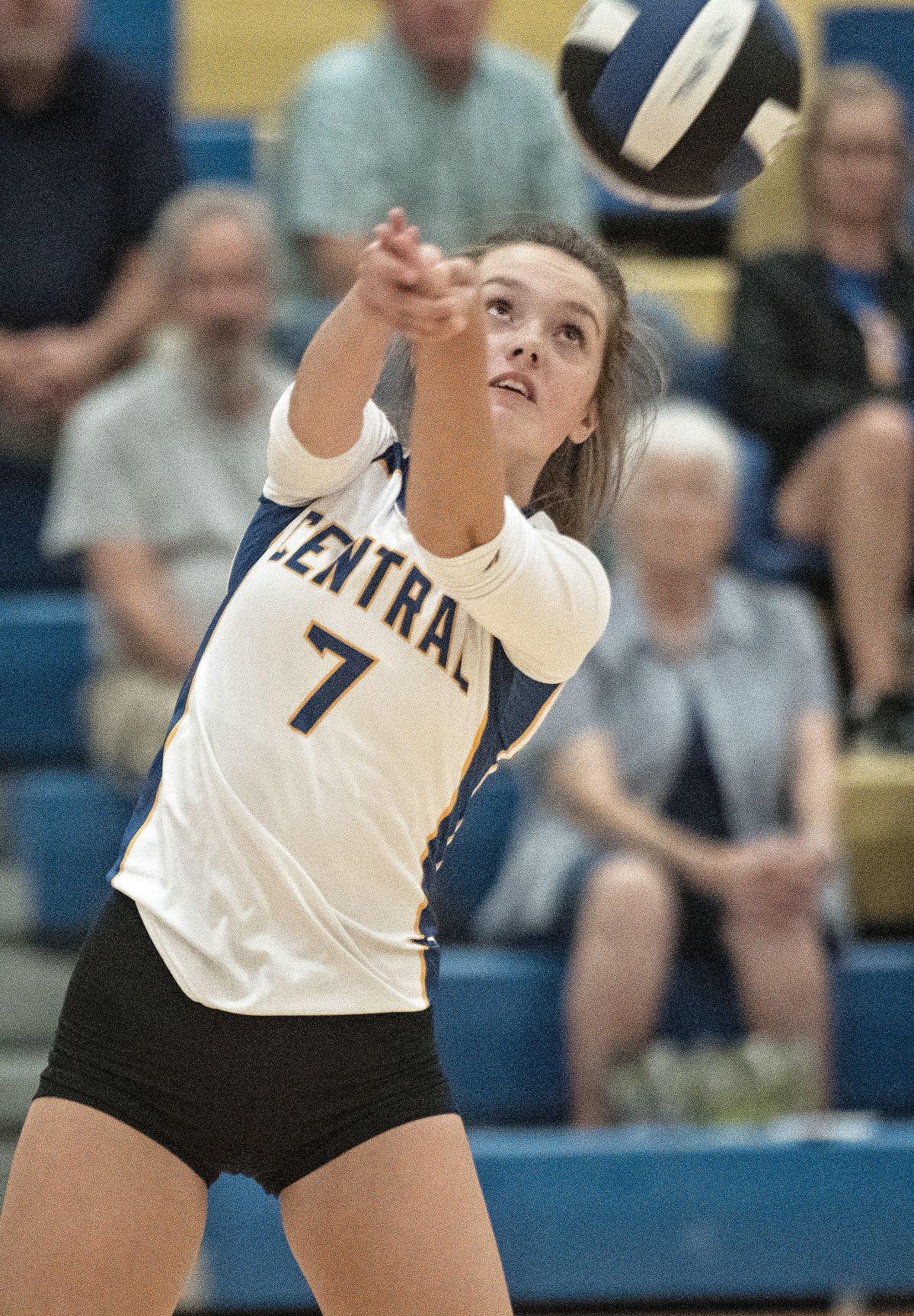 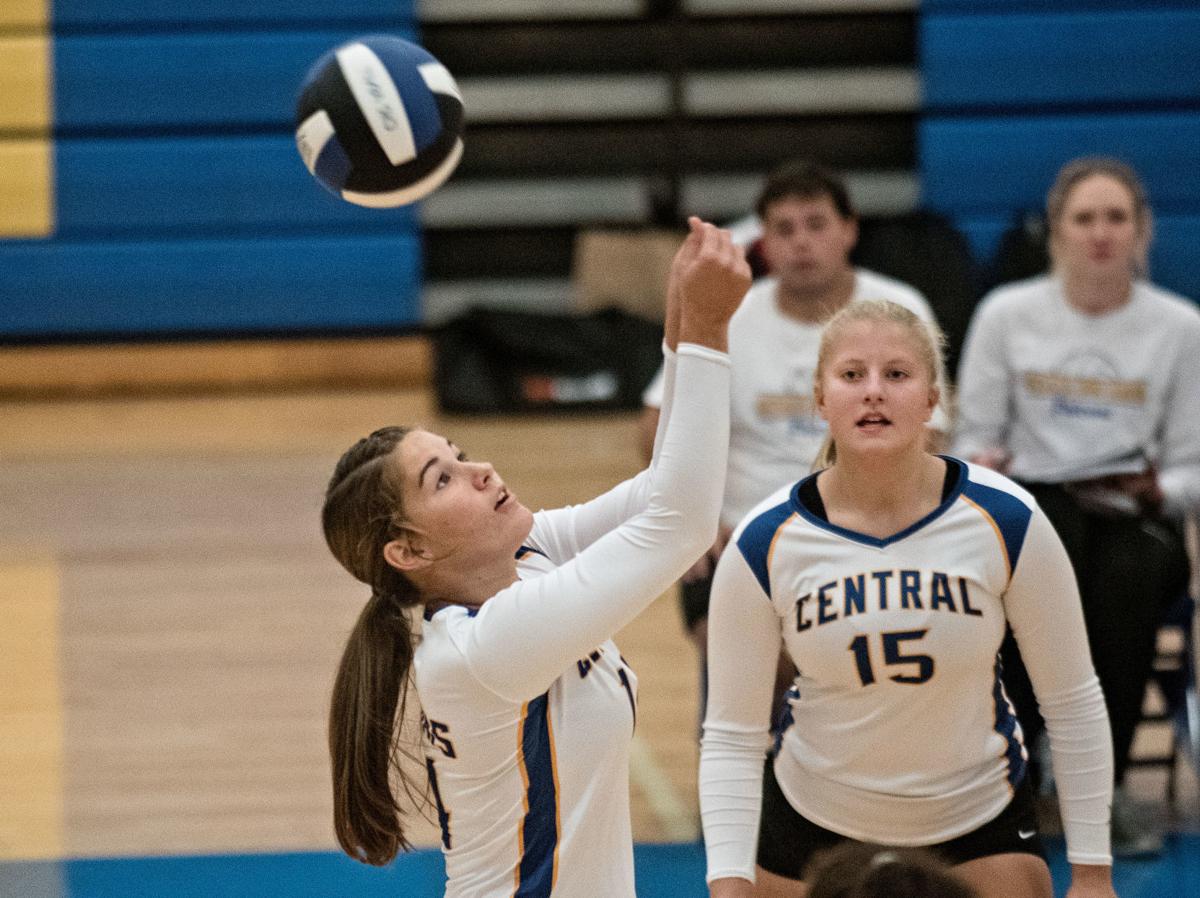 Central’s Maria Marston concentrates on a hit while teammate Emily Funkhouser looks on. 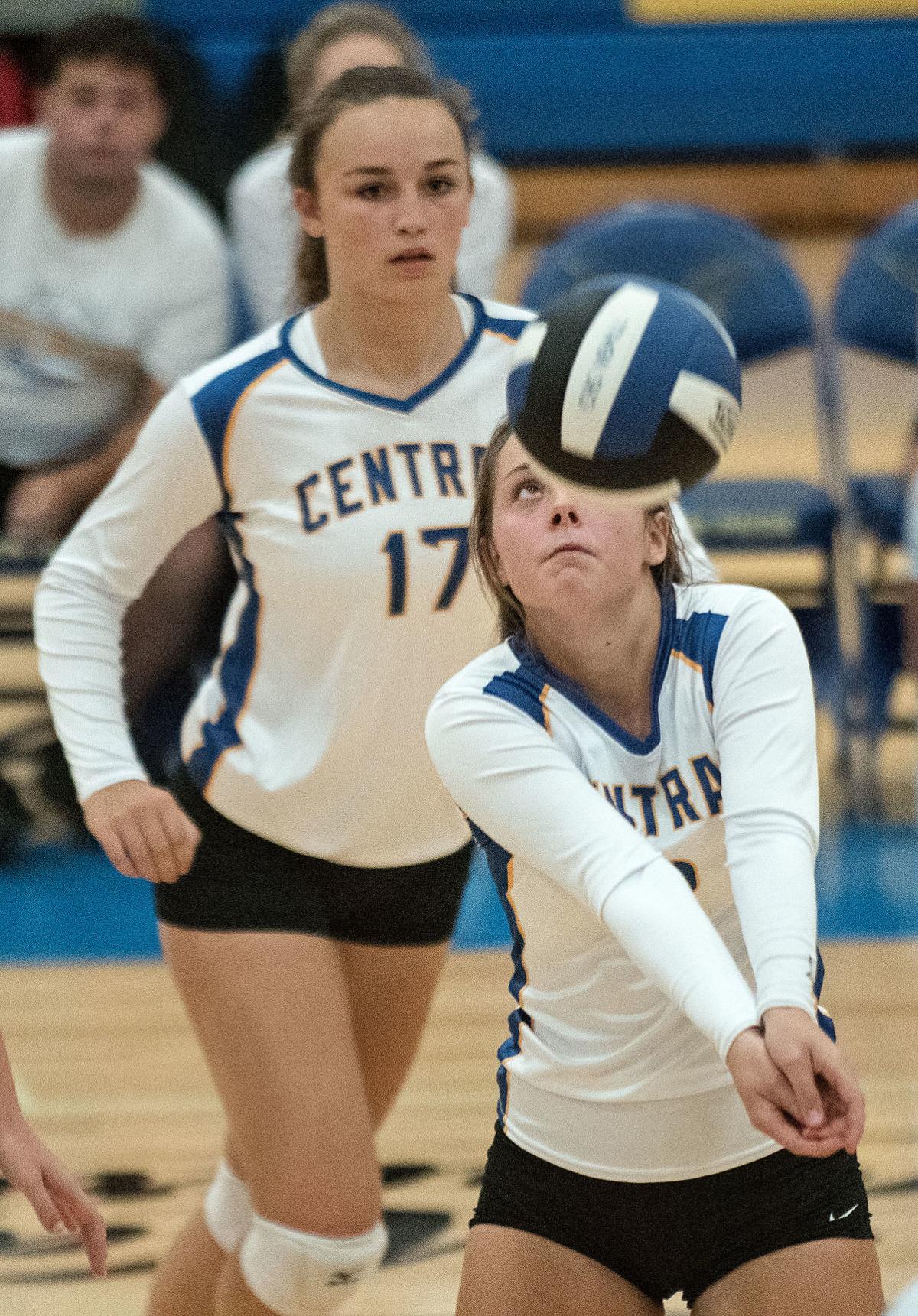 Central’s Alyssa Thorpe prepares to make contact on a hit. 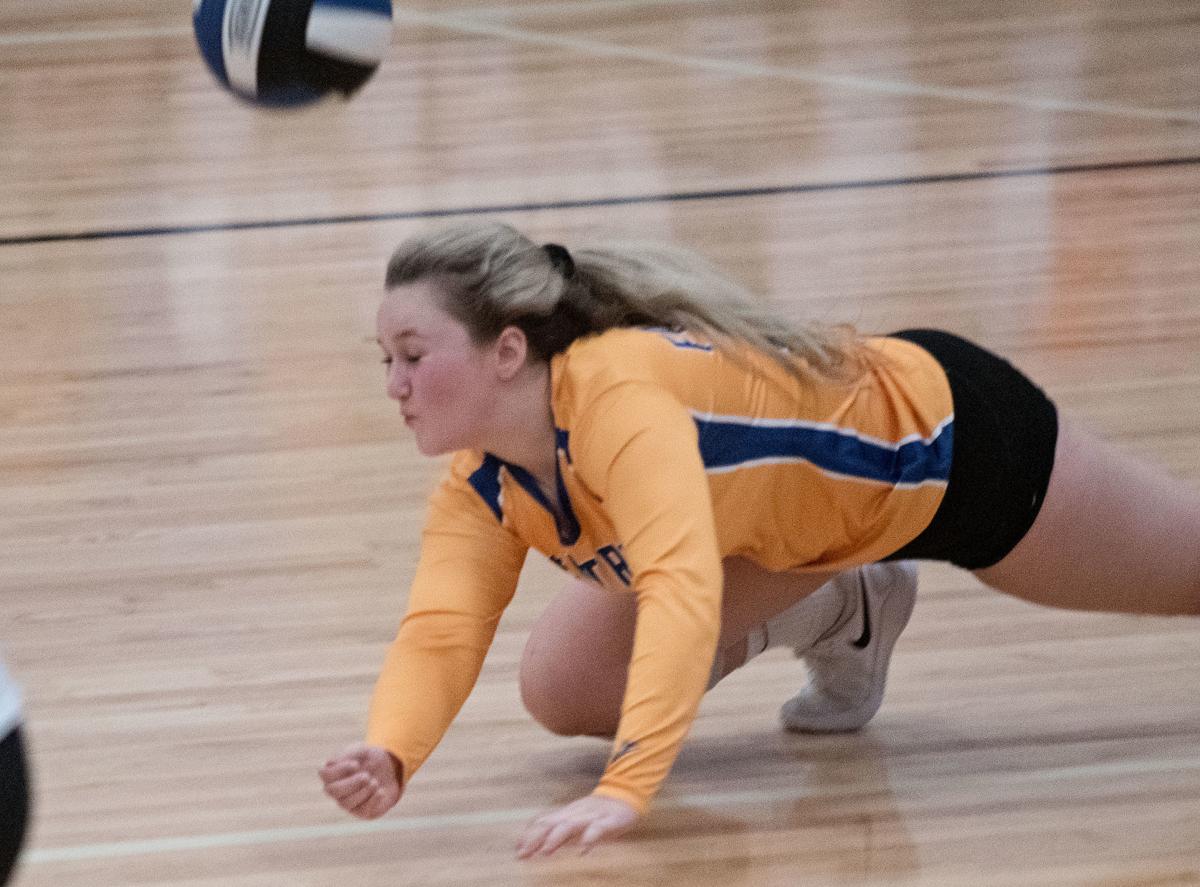 Central’s Kaitlyn Funk hits the floor as she digs the ball during volleyball action Monday night.

Central’s Emily Funkhouser, left, races to try and dig the ball out of the net as George Mason’s Sydney Longer defends.

Central’s Maria Marston concentrates on a hit while teammate Emily Funkhouser looks on.

Central’s Alyssa Thorpe prepares to make contact on a hit.

Central’s Kaitlyn Funk hits the floor as she digs the ball during volleyball action Monday night.

“It was mainly our serve-receive,” Central coach Ashlie Clar said. “I thought we fixed it against Strasburg (last week), but (the Mustangs) have really, really good spot serves and float serves. We just had issues with it. We were looking at each other a lot, waiting for somebody else to take the ball. That was our main issue tonight.”

The first set was back-and-forth until the Mustangs used a 12-3 run to pull ahead 20-11. The Falcons were able to battle back late in the set.

Two kills by Central sophomore hitter Emily Funkhouser and one from senior hitter Maria Marston helped the Falcons on an 11-2 run to even the set at 22-22.

The Mustangs answered with the last 3 points on a kill each by Megan Boesen and Gillian Murphy and a service ace by Boesen.

“We love to get down by 5 or 6 points and then fight our way back in it every single time,” Clar said. “It shows growth that we’re fighting back in it but we can’t let teams serve to us like that, like 5 points in a row.”

The second set was more of the same. The Mustangs built a 14-6 edge, aided by five aces. Central responded with a 6-1 run, ignited by an ace from sophomore Bailey Spiggle, a kill by Funkhouser and a block by sophomore Keeyarra Dodson to cut the lead to 15-12.

The Mustangs ended the set with a 10-5 run to take a two-set lead. The Mustangs had two more aces and George Mason junior Vanessa George had two kills during the final surge of the second set.

Clar said that she was happy with how her team played when they were aggressive, but said her team wasn’t aggressive enough throughout the match.

“From the beginning, I told them we need to be aggressive,” Clar said. “We can’t let them be the attackers or we’re going to be digging up balls all night and we can’t win like that.”

The third set went a little bit differently as the Falcons took an early 7-5 lead. An ace by sophomore setter Erika Hutton and a kill each by sophomore Ella Toothman and Dodson helped give the Falcons the early advantage.

The Mustangs rallied with two aces and two kills by junior hitter Roza Gal to take a 12-8 lead. The Falcons came right back, aided by four straight George Mason errors and a block by Funkhouser to take a 13-12 lead.

The teams went back-and-forth until the Falcons pushed ahead 22-20 on a block by Dodson. The Mustangs called a timeout and then ended the match with a 5-0 run. Gal had a kill and two blocks during the run for the Mustangs.

“I think we just thought well ‘this is our set. We’re going to win,’” Funkhouser said of the third set. “And then we just gave up.”

The Falcons (1-6, 0-1 Class 3 Northwestern) were coming off a four-set win over Shenandoah County rival Strasburg and Funkhouser said she thought the team overlooked the Mustangs.

“We didn’t come together as a team tonight,” she said. “We didn’t talk really well. We didn’t play as a team, we just played as individuals. I feel like we got in our own heads about how we won against Strasburg. We thought since they were kind of ranked about the same, they have a big middle hitter and smaller outside hitters, that it was just going to be like the same. But it didn’t work out the same.”

Central was led by Toothman with five kills and Funkhouser with four kills, a block and a team-best four aces. Marston had three kills and two blocks and Dodson had one kill and three blocks. Hutton added six assists and three aces for the Falcons.

The Mustangs have no seniors and were one of the top teams in the Bull Run District last year. Both Central and George Mason have moved from Class 2 to Class 3 and to the Class 3 Northwestern District this year. Clar said it was good to see how her young team, with five sophomores, could fare against quality competition in the district.

“They’re well-coached. They’re good at every position,” she said. “I’m not unhappy with how our team played because there were definitely some good spots. We definitely competed with them. I really wanted to take that third set from them – but we’re getting there.”