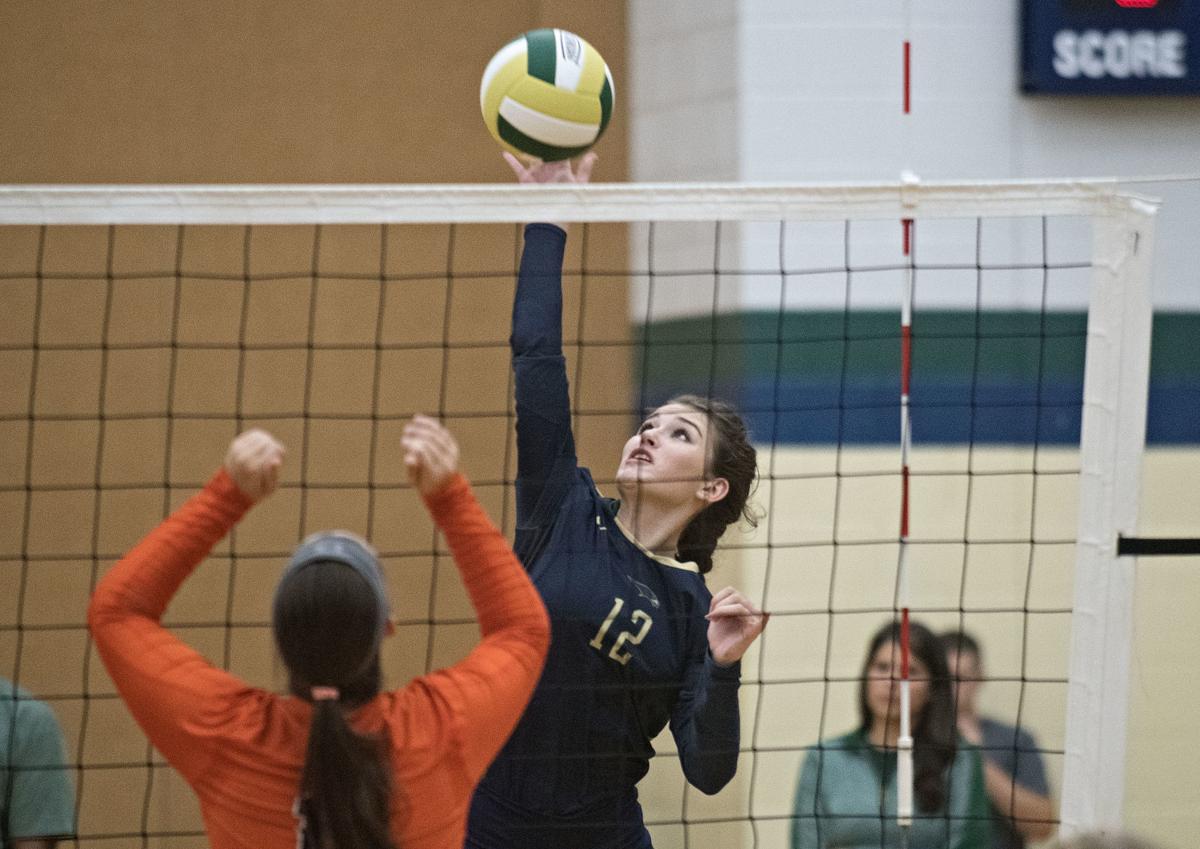 Skyline’s Megan Haun goes up for a kill over Brentsville’s Katie Dimond during volleyball action Tuesday night in Front Royal. 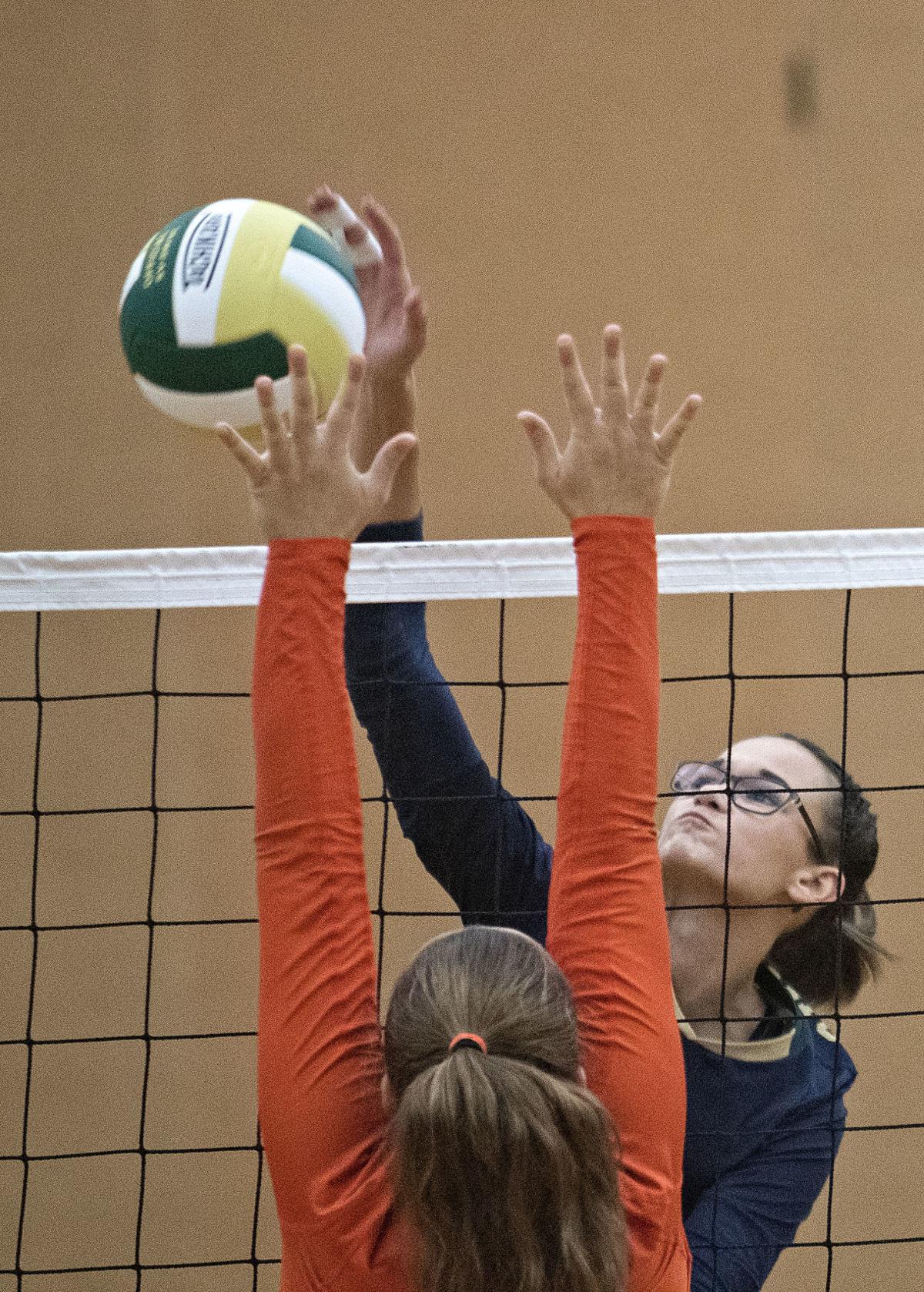 Skyline’s Aaliyah Chunn goes up for a kill. 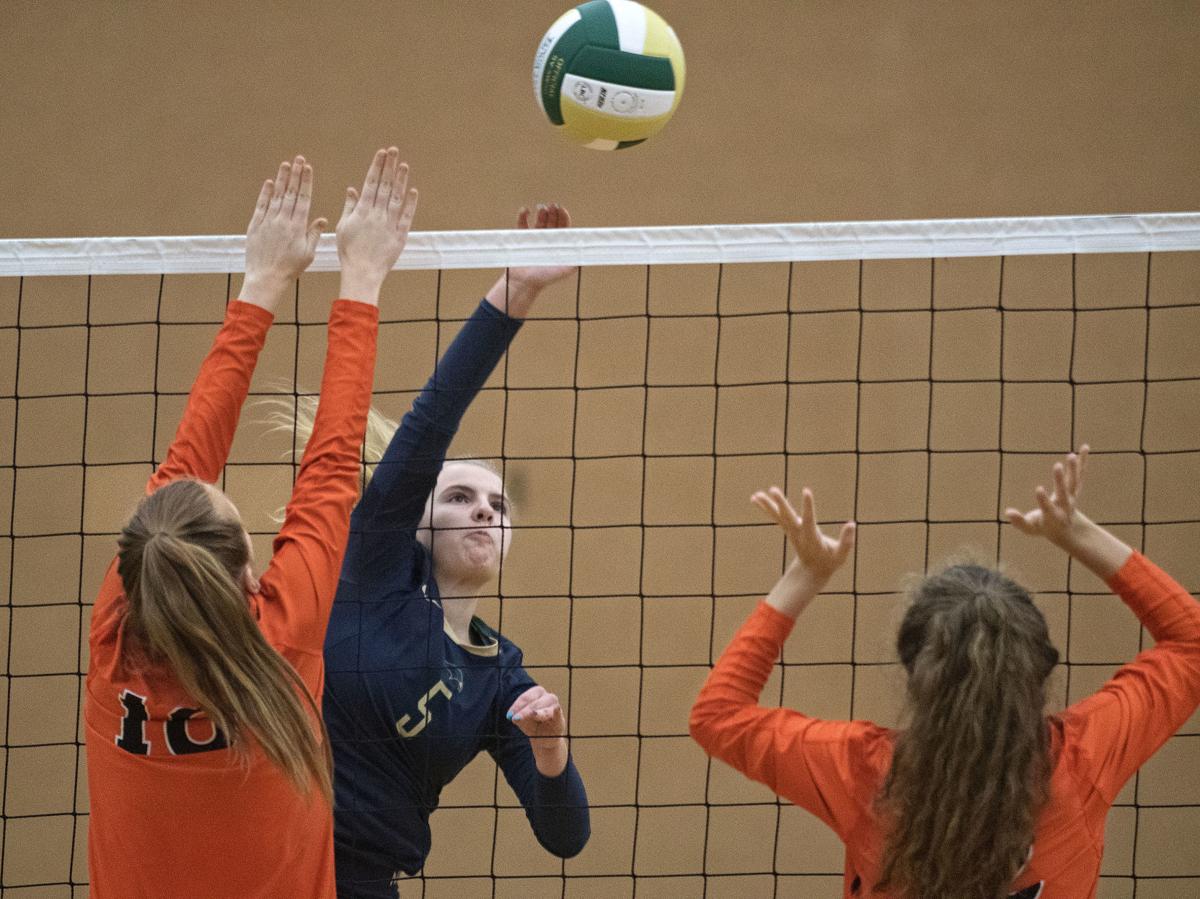 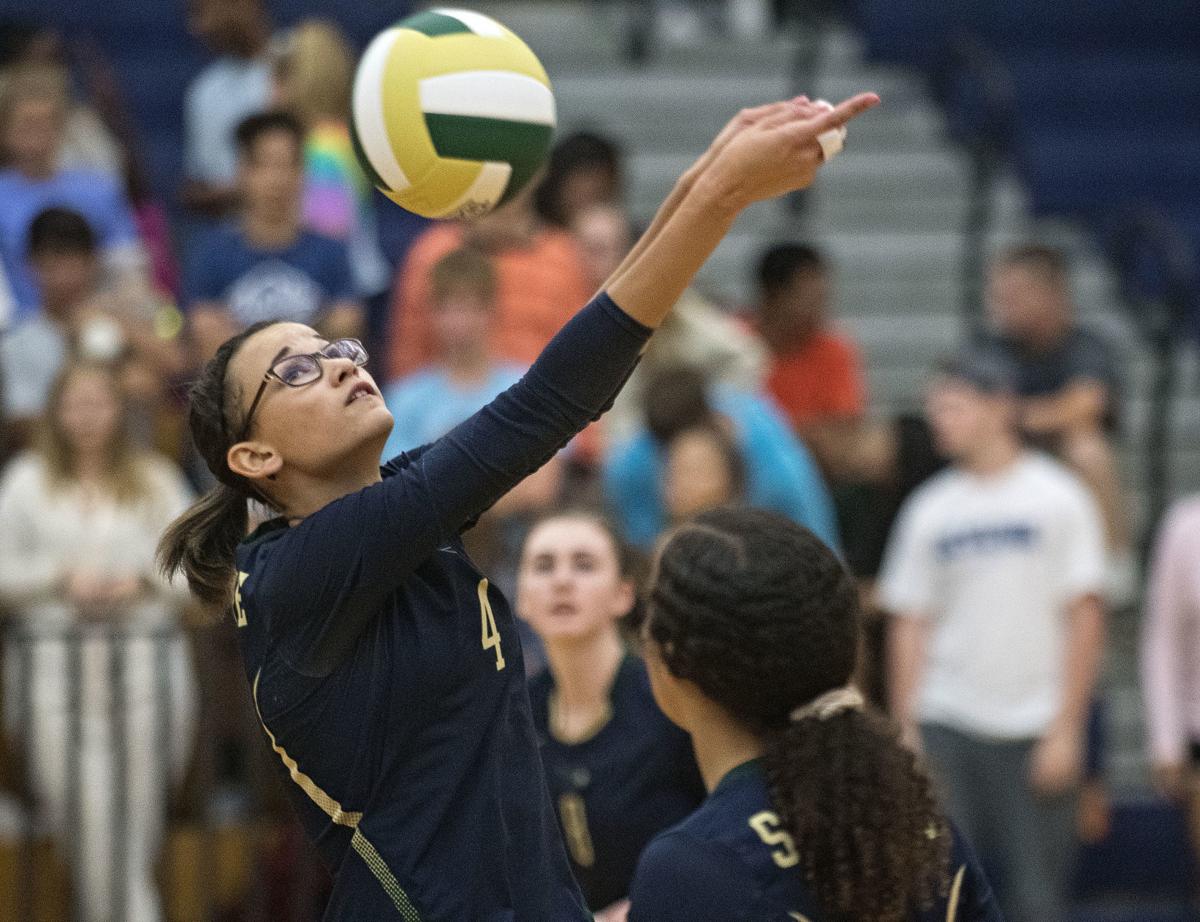 Skyline’s Aaliyah Chunn makes contact on a third hit to clear the net.

Skyline’s Megan Haun goes up for a kill over Brentsville’s Katie Dimond during volleyball action Tuesday night in Front Royal.

Skyline’s Aaliyah Chunn goes up for a kill.

Skyline’s Aaliyah Chunn makes contact on a third hit to clear the net.

FRONT ROYAL – Skyline overcame a slow start and didn’t look back in its Class 3 Northwestern District opener on Tuesday night.

“I feel like we started off a little shaky with our missed serves,” Skyline senior setter Adrianne Kinsey said. “But then we definitely came back and we fixed that. We had quite a few aces. So that was good.”

The Hawks had six serving errors in the first set, which helped Brentsville keep the set close. The score was 10-10, with half of Brentsville’s points coming on Skyline service errors. The Hawks then won 15 of the next 20 points to finish off the set.

Skyline had 10 aces in the second set and Kinsey started things off with five during an 8-0 run to open the set.

“That definitely builds confidence for the rest of the team. It sets up the set to go well,” Kinsey said of her serving to start the second set. “I’ve been struggling with serving recently, but it’s kind of a mental thing. I’ve kind of tried to calm down, take a deep breath and fix that.”

“There were a lot of holes, and I noticed that the middle section of the court was open,” Chunn said. “And I was like ‘I’m going to hit that spot a couple times, and if they readjust, I’ll move my serve again.’ But other than that, I was just taking advantage of those open spots.”

The Hawks built a big lead in the third set, but the Tigers rallied to close the gap to 21-15. An ace by Kinsey and two blocks by Chunn finished the match off.

Skyline coach Erika Berry said she was most pleased with how her team stayed focused and dominated.

“It’s nice to see that they came out strong tonight, came out aggressive even though the competition might not have been as high,” Berry said. “Sometimes we like to play down (to our competition). And I was glad to see them pursue and be dominant for a change instead of getting us in binds and working out of it later.”

It was the second win in a row for the Hawks, who beat Eastern View, 3-1, on Monday. Berry said the Hawks did not play well on Monday, so she’s hoping that the win over Brentsville will give the team a real boost.

The team has a good mixture of seniors and youth. The Hawks have five seniors and one freshman and four sophomores. Berry said she’s still looking for someone to step up and take on the team leader role, but she’s happy with how the team has meshed together.

“There’s no I on this team,” Berry said. “We talk about it’s all of us, including those bench people, because I could pull you off the bench quick and throw you in there. So you got to be ready to go. There’s so many seniors on the court and whether they’re having an off night or an on night, their presence on the court is needed. A lot of the younger ones look up to them.”

The Hawks (3-4, 1-0 Class 3 Northwestern) have made some strides this season despite facing a tough non-district schedule.

“I think that we’ve had a lot of positives and a lot of accomplishments for Skyline volleyball,” Berry said. “I don’t think our record really shows all that. But we’ve had a couple matches where we’ve been down the first two sets and then we come back to play. And that’s unheard of for us — you know once we’re down, we’re down — and so we’ve picked that up.”

The Tigers (0-3, 0-1 Class 3 Northwestern) were led by Samantha Dawson with three kills. Chunn led the Hawks with six kills, two blocks and a team-best nine aces. Kinsey had eight aces and six assists and sophomore setter Grace Benson had nine assists for the Hawks. Skyline had eight different players with at least one kill.

Skyline plays at George Mason on Thursday. With some of the teams losing some top players to graduation, the Class 3 Northwestern District appears to be wide-open. Warren County has won the district the last two years and advanced to the state tournament each year but lost a lot to graduation. Berry said it’s a good opportunity for her team this season.

“It’s exciting for us,” she said of the district race. “I think we’ve always had that opportunity, we’ve just never been able to capitalize on it. So getting these wins like tonight hopefully brings us into those games with a little bit more confidence, a little bit more prepared. Warren County will always be a tough one, being a cross-town rival. But we have to stick to our game and play what we know and we’ll be fine.”