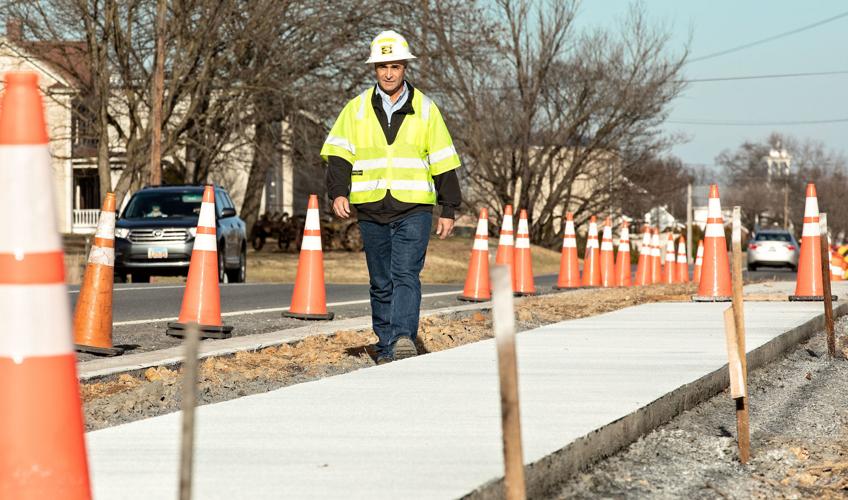 Brent Long, project manager for G.B. Foltz Construction Inc., walks beside this recently poured concrete sidewalk outside Avondale Acres in Mount Jackson. About $650,000 in American Rescue Plan Act money is earmarked for the town’s portion of the funding of a major extension of sidewalks along Conicville Boulevard to the Sheetz store and to the north along Main Street to East Avondale Avenue. 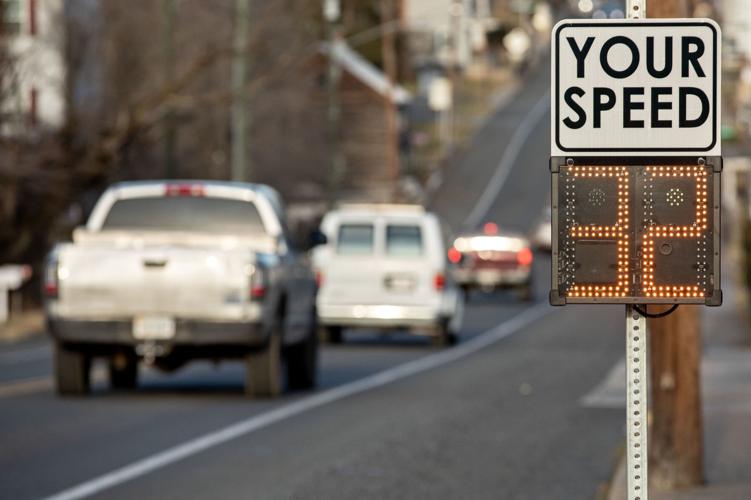 Toms Brook spent $5,354 on speed signs along Main Street with part of the money it received from the American Rescue Plan Act.

Brent Long, project manager for G.B. Foltz Construction Inc., walks beside this recently poured concrete sidewalk outside Avondale Acres in Mount Jackson. About $650,000 in American Rescue Plan Act money is earmarked for the town’s portion of the funding of a major extension of sidewalks along Conicville Boulevard to the Sheetz store and to the north along Main Street to East Avondale Avenue.

Toms Brook spent $5,354 on speed signs along Main Street with part of the money it received from the American Rescue Plan Act.

From expanding broadband internet access to installing modern water meters and HVAC systems to building new sidewalks to refurbishing community swimming pools, Shenandoah County localities have spent or budgeted much of their federal American Rescue Plan Act money on a range of projects.

President Biden signed the American Rescue Plan Act (ARPA) into law on March 11, 2021. The $1.9 trillion package of financial aid — intended to help governments during the COVID-19 pandemic — includes $350 billion for state and local governments. The money must be obligated by the end of calendar year 2024 and spent by the end of calendar year 2026.

Here is a look at many of the ways in which government entities in Shenandoah County have spent and plan to spend their share of ARPA funds:

To date, the county’s major ARPA-funded initiatives have included more than $3.7 million budgeted for the expansion of broadband internet access, $1.5 million allocated for the replacement of the Circuit Court’s HVAC system, $345,000 budgeted for new ambulances and a $306,803 expenditure of premium pay for essential safety workers.

The county has a little more than $2.5 million worth of unspent and/or unallocated ARPA funds.

“There are additional funds that have been awarded to the county under the Local Assistance and Tribal Consistency Funds, which were established as part of the American Rescue Plan Act, but follow different U.S. Treasury guidance than ARPA funds,” Dill said. “The total award amount was $238,936, with $119,468 received to date. These funds have not been spent or allocated (budgeted) to date.”

The division has more than $4.5 million in unspent and/or unallocated ARP/ESSER funds.

The Town of Edinburg received a total of about $1.1 million in ARPA money, according to Mayor Dan Harshman.

Town officials are using $225,000 in ARPA funds on the completion of a pump station and a 200,000-gallon water storage tank, as well as on a generator for the station.

Other ARPA-funded town projects include about $62,000 worth of repairs to the town pool and up to $56,000 worth of work to replace HVAC units at the Edinburg Mill.

Town officials also plan to use ARPA funding for the Cave Springs water line project. The total installation cost of new water lines in this project could range from over $200,000 to more than $300,000.

More than $1 million of that total has been earmarked or spent so far.

About $650,000 in ARPA money is earmarked for the town’s portion of the funding of a major extension of sidewalks along Conicville Boulevard and to the north along Main Street to East Avondale Avenue. This project is partially paid for by a federal grant through the Virginia Department of Transportation and is expected to be completed in early July, Showalter said.

He said the town has spent approximately $364,000 in ARPA funds on replacing all of the customer water meters connected to the town water system to a modern radio read system.

“The town has also recently opened bids on a $4 million improvement project at its wastewater treatment plant that is to be funded by a combination of grants, loans and a portion of ARPA funds,” Showalter said. “The town is awaiting word on its grant and loan funding applications with the state and federal authorities before the final funding combination is determined. This project is slated for completion by September 2024.”

He said the town also is looking into improving street lighting in several sections of town, but the scope and estimated costs are not yet available.

“The amount of ARPA funds remaining after the previously mentioned projects could contribute to the lighting or other priority projects identified by the Town Council in the upcoming budget cycle,” Showalter said.

Other major ARPA-funded expenditures include $344,667 worth of General Fund projects. These include the purchases of a new public works truck, a skid loader with accessories, a vacuum excavator, park and pool improvements, town office window replacement project at the town office and a donation to the New Market Fire and Rescue Department.

“The council has earmarked some of the remaining funds for additional projects, including the New Market community center, Route 211 sidewalk project and water/sewer distribution maintenance,” Walters said.

The town of Strasburg received approximately $6.8 million in ARPA funds, according to Town Manager Waverly Coggsdale.

The town has spent about $1.5 million in ARPA funds on the meter project and the new vehicles, leaving about $5.3 million in unused funding, Coggsdale said.

So far, the town has spent $6,000 of its funding on a compliance accountability contract with the Northern Shenandoah Valley Regional Commission, $5,354 on speed signs purchased in cooperation with the town of Edinburg, $2,500 on the rental of the St. Peter Lutheran Church fellowship hall in order to allow for social distancing at meetings, $1,250 on technology improvements and $100 toward tourism and recreation.

Funds that have been earmarked include $50,000 for sidewalk repairs/improvements that might begin this spring, $8,000 toward community safety and $2,000 for the Shenandoah Valley Rails to Trails project.

“The largest portion of our obligated funds are centered on two large utility projects: comprehensive replacement and update of our water meters, and replacement of our membrane filters and SCADA (supervisory control and data acquisition) system at the wastewater treatment plant,” Grisdale said. “We also included funds to support an updated master planning effort for Larry D. Bradford Fairview Park, resurfacing of the tennis courts at W.O. Riley Park, conducting a drainage master plan, and replacing our town street sweeper.” The town has $1,240,611 in ARPA money that has not yet been budgeted for a specific use.

“I anticipate that we will have specific uses identified for the remaining funds when our next fiscal year budget is finalized later this spring,” Grisdale said.

I, too, am curious why the reporter did not mention that Cline voted against the American Rescue Plan.

I'm curious as to why the reporter never mentioned that our Congressman, Ben Cline, voted against this obviously beneficial, long overdue piece of legislation?

Ben Cline voted AGAINST the American Rescue Plan Act. Thanks, Democrats, for supporting our community.