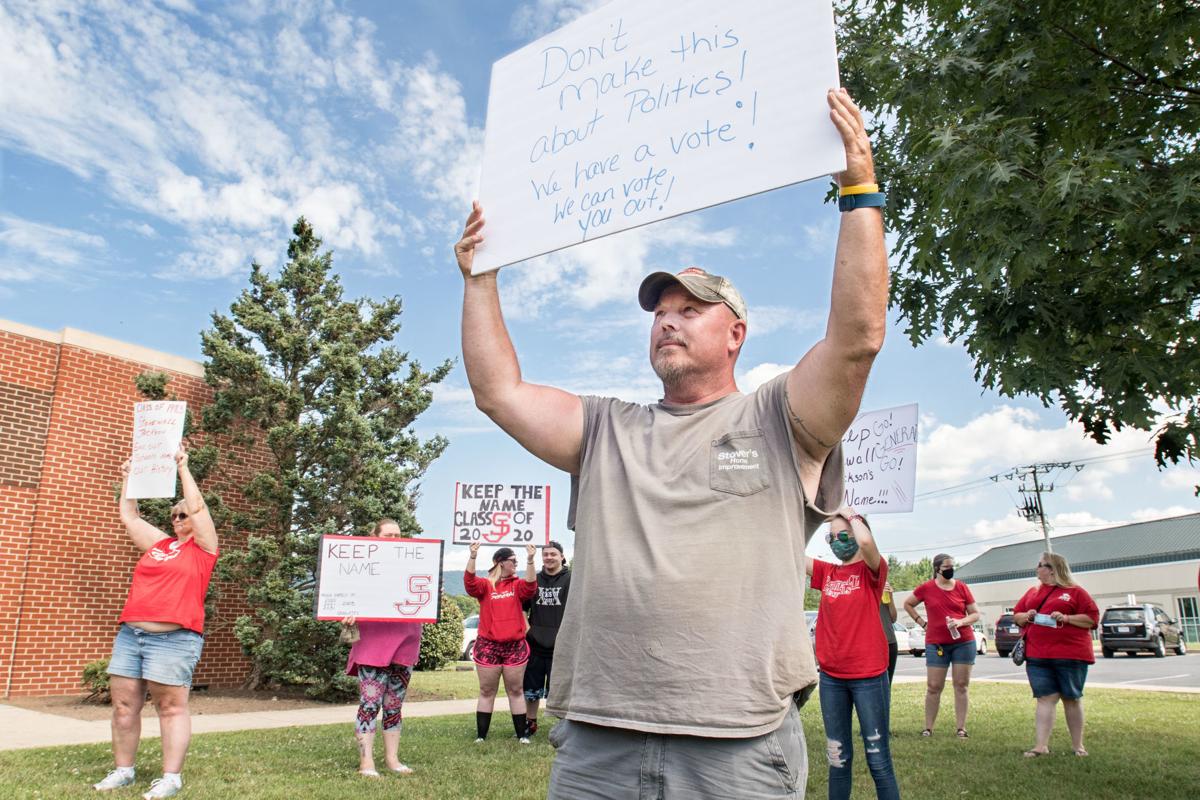 Duane Stover, a 1984 graduate of Stonewall Jackson High School, holds a sign showing his opposition to changing the names of Shenandoah County's southern campus schools and mascot Thursday evening while a virtual School Board meeting was being held. Some 20 supporters for keeping the schools' names held signs outside the board's meeting room in Woodstock. 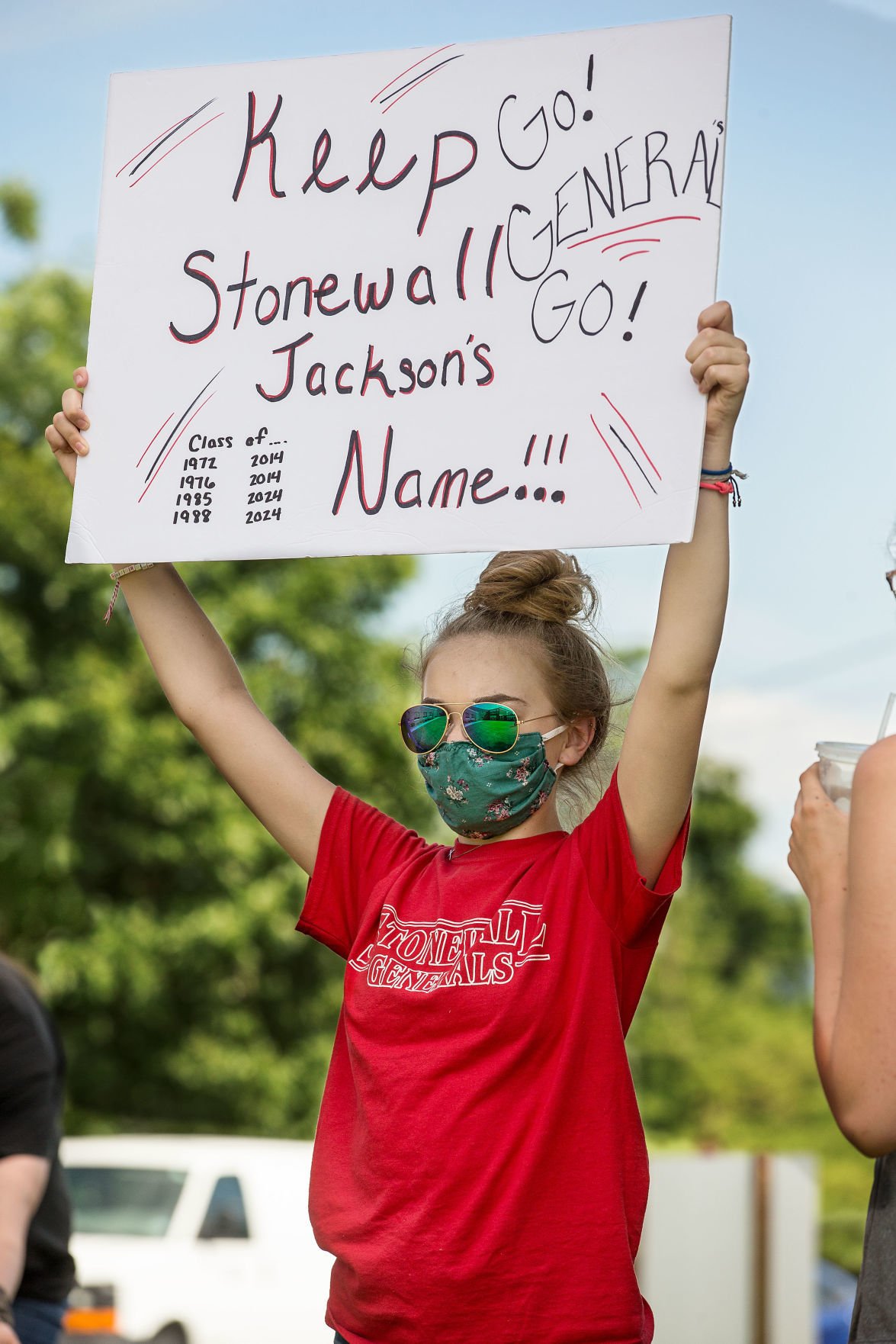 Jordan Foster, 14, of Basye, shows her support for keeping the name of Stonewall Jackson High School. She will be a ninth-grader at the school this fall. 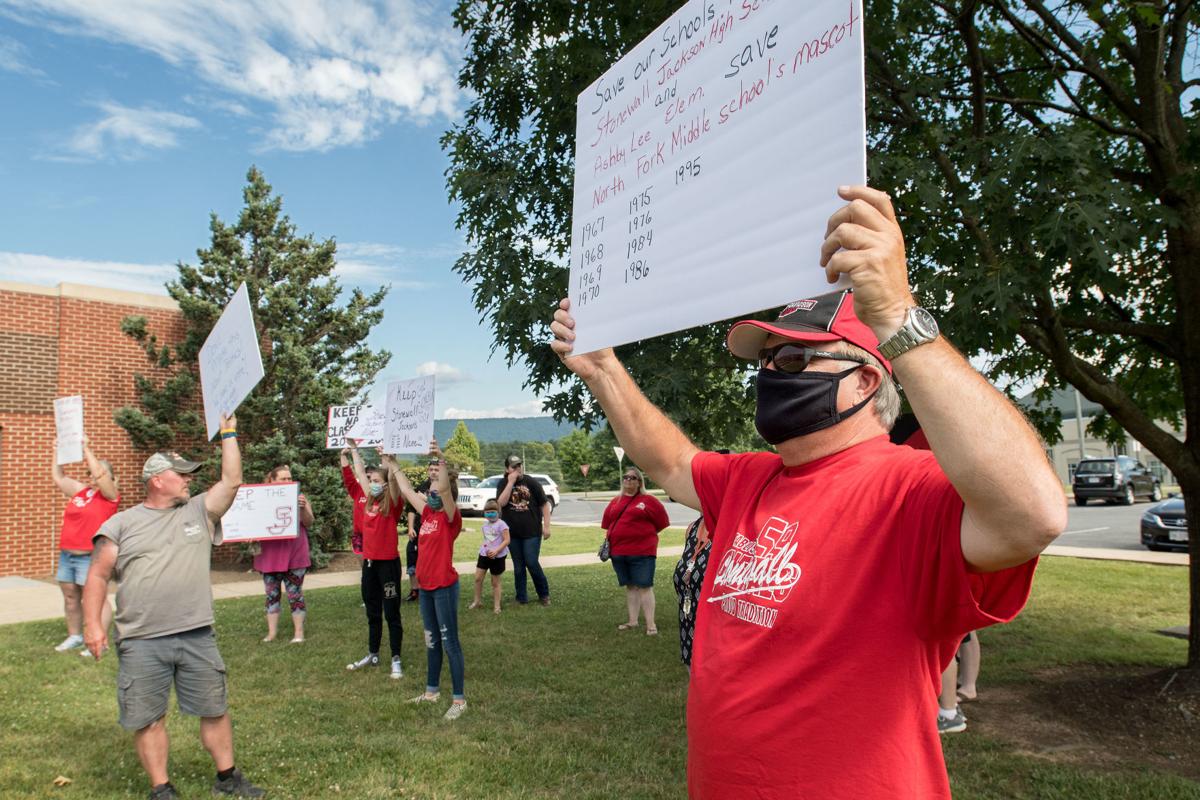 Duane Stover, a 1984 graduate of Stonewall Jackson High School, holds a sign showing his opposition to changing the names of Shenandoah County's southern campus schools and mascot Thursday evening while a virtual School Board meeting was being held. Some 20 supporters for keeping the schools' names held signs outside the board's meeting room in Woodstock.

Jordan Foster, 14, of Basye, shows her support for keeping the name of Stonewall Jackson High School. She will be a ninth-grader at the school this fall.

The Shenandoah County School Board on Thursday evening voted in favor of a resolution to retire the names of Stonewall Jackson High School and Ashby Lee Elementary School and the Rebel mascot at North Fork Middle School in a preliminary step to cut ties with the buildings’ references to the Confederacy and military officers who fought for it during the Civil War.

The Board voted 5-1 to approve the resolution, with School Board Chair Karen Whetzel, Vice-Chair Cynthia Walsh and fellow board members Michelle Manning, Shelby Kline and Andrew Keller voting in favor of what was a controversial, emotionally charged topic that generated a large amount of feedback from both advocates and opponents of proposed name changes to schools on the division’s southern campus.

Marty Helsley, who made a motion – which was seconded by Keller but ultimately voted down, 5-1, by board members – to postpone action on the proposed resolution until August, was the lone dissenting vote.

Per the resolution, Superintendent Mark Johnston is now tasked with creating a process and timeline for coming up with new names and a new mascot to be brought before the School Board at its Aug. 13 meeting.

All six board members said during Thursday’s virtual meeting that they’d fielded an overwhelming number of emails and phone calls regarding the resolution to retire the school names, which was considered a branch off of a resolution the board unanimously approved on June 25 condemning racism and “affirming the division’s commitment to an inclusive school environment for all.”

Petitions for and against potential school name changes were circulated in recent days, and a public comments portion at the start of Thursday’s virtual meeting drew 25 speakers on the topic and lasted nearly 80 minutes.

During a period of discussion among board members prior to the vote on the resolution, Keller stated that “politics and history aside, I think we can all agree that public school names probably shouldn’t be controversial, and yet these are.”

Keller went on to say that he didn’t see a compromise between the two sides.

“There’s no way to preserve the traditions and heritage of one group and ease the inequity that another group may have felt,” he said. “You can’t keep a name and remove racist implications from it. You can’t claim to be inclusive, which we do, and have students who feel like they’re excluded.”

A few board members who voted in favor of the resolution to retire the school names cited discussions they’d had with former students who stated they felt unwelcome and unwanted because of the name of the school they were attending. Walsh said that for her, the matter of school names became a more pressing issue when former students of different ethnicities “came to us with their stories.”

Walsh noted that when Stonewall Jackson High School was built in 1959, it was named during a time when schools in Virginia were still segregated. Walsh added that though arguments can be made about the positive things Jackson did in his life – he is known to have taught African Americans how to read and held a Sunday school for Black people during a time when it was against state law to do so –  “surely the superintendent and School Board at the time (the high school was named) had to know that naming a high school after a Confederate general would send a clear message to Black families that they were not welcome in that brand-new school.”

Keller said before the vote that the School Board had to answer an “essential” question with its decision.

“Which is more important,” he posed, “someone’s heritage regarding a school’s name or someone’s inclusion into that school, their right to feel welcome?”

Some public critics of the name changes expressed concern about the timing of the decision and a rebranding process that will surely include a hefty price tag, one they fear will land in the lap of county taxpayers while financial hardships grip the country amid the COVID-19 pandemic.

The resolution listed a financial impact of $500,000, a number that Johnston said on Wednesday was a “placeholder” to show there would be a cost associated with such an undertaking. Johnston estimated on Wednesday a cost of $376,000 to rebrand the high school alone, a figure that included changes to the basketball court, bleachers, scoreboards, signage and athletic uniforms. Determining how the school division will pay for those costs will be part of the renaming process that Johnston will bring back to the board next month.

Some opponents of the resolution to retire the school names wanted such a decision left to a vote of county residents, though Whetzel noted on Wednesday that state code places the responsibility of school names in the hands of the School Board.

Other critics of the name changes view such actions as an attack on heritage and history during a time when other school divisions are making similar decisions and Confederate statues are being removed across the state.

Helsley before the vote questioned “where is this gonna end?” and said people at some point will “need to take a stand” against others who are trying to “destroy” the efforts of the country’s Founding Fathers.

“I know I’m making this bigger than what it is,” Helsley said, “but eventually we’ve got to take a stand. If not, we’re gonna lose the country.”

Helsley, during his earlier motion to postpone a decision on the resolution – a motion he made because he felt the public and the School Board needed more time to discuss the topic, ideally in an open forum, he said – stated that he was convinced changing the name of a school building would not “improve racism in our county.”

Keller noted that since his time as a Shenandoah County student at Strasburg High School, he’s never known the Stonewall Jackson community to practice “bigotry, hatred or prejudice” and has long considered the people who live between Edinburg to New Market the “salt of the earth.”

Manning, like Keller, said she didn’t think the schools on the southern campus are “full of racists who outwardly try to belittle anyone.”

“But if one child walks into the schools with those names, a child of color,” Manning continued, “and feels less than or in any way intimidated or embarrassed by the name on their diploma because of what it represents to them and their ancestors, or if one child feels empowered by the name on the building to make someone feel less than, then it is in the best interest of all the children to eradicate that name from the building. Not from history, not from heritage, just from the building.”