A bus made up with the ShenGo logo. The county’s buses are in Staunton and should be here next week. 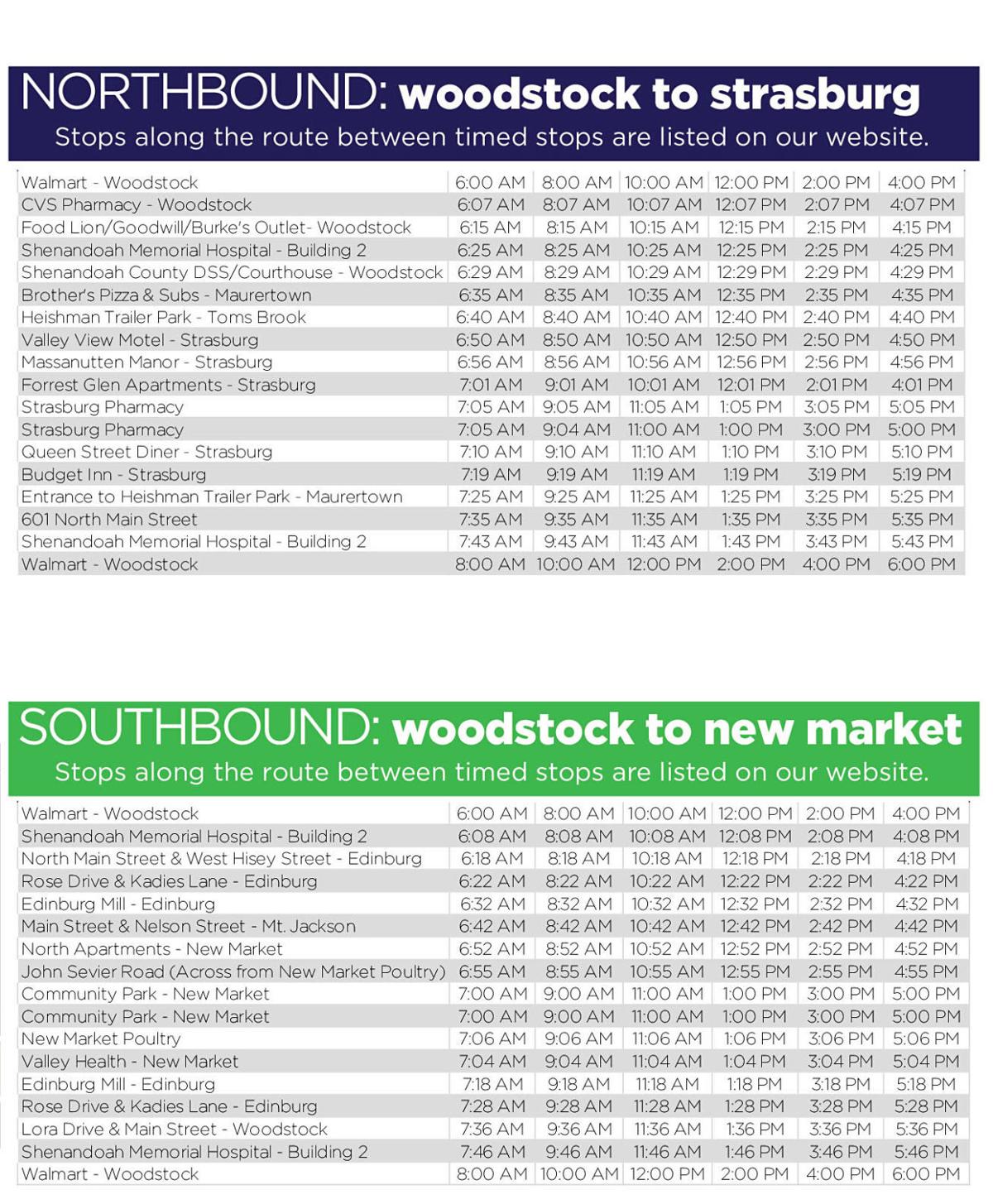 A bus made up with the ShenGo logo. The county’s buses are in Staunton and should be here next week.

WOODSTOCK — Shenandoah County residents will soon have access to a bus system that will take them to various points in the county.

In two weeks, the county will debut a new public transit bus service dubbed “ShenGo Transit,” which is set to begin operation on Oct. 4. The service, provided by Virginia Regional Transport, will operate from 6 a.m. to 6 p.m. Monday through Saturday during an 18-month “demonstration trial,” according to Jenna French, the county’s director of tourism and economic development.

For a $1 one-way fare, passengers can travel via bus from Strasburg in the north end of the county to New Market on the south end (and vice versa), or get on and off at various stops between those two towns. Children 12 and under can ride free of charge.

The bus route, which primarily follows Route 11 but deviates slightly to certain areas that French said were deemed to be of “community benefit,” features two loops -- one from Strasburg to Woodstock and one from New Market to Woodstock -- that a news release from the Northern Shenandoah Valley Regional Commission indicated would be completed every two hours. Passengers wishing to travel further north or south than Woodstock can transfer at one of two designated transfer points in the town -- at Walmart and at Shenandoah Memorial Hospital -- for free.

French noted that there will be an option for people to call VRT to make arrangements for pickup within a certain proximity to the route if they’re unable to reach one of the designated stops. People unable to pay the fare can also apply for vouchers through the Department of Social Services, she said.

The groundwork for the public transit service was laid beginning around 2017, French said, when the Shenandoah County Chamber of Commerce and its Nonprofit Council began discussing the need for such a service in the county. Discussions grew to include representatives from the county and its towns, the regional commission and VRT as interest level was gauged and a feasibility study was performed.

The initiative was sparked by the need to provide reliable public transportation opportunities for those lacking access to a vehicle for things like healthcare appointments, trips to the grocery store or traveling to and from work, but French said ShenGo Transit will be available to anyone.

“Once we got the towns and the county and different folks around the table -- and there were private sector and nonprofit folks also at the table early on as well -- not only did we talk about it from a community services and needs perspective, but we talked about it from a tourism perspective and that this has the ability to help anybody,” French said in a phone interview last week. “If we have visitors that are coming to town and staying in Strasburg, for instance, but want to come down and do something in Edinburg, they can take that transportation and not have to worry about driving themselves. We’ve got local residents talking about being able to use it to get to and from some of the local breweries and things like that and not have to worry about if they had a beer and getting in the car and driving. It really is intended to serve everybody within the county and we’re very proud of that.”

Phil Thompson, director of operations for VRT, stated during last week’s Shenandoah County Board of Supervisors meeting that the buses used for the service would seat 14 people, 12 if a mobility device is required for a passenger.

Karen Taylor, senior project and operations manager for the NSVRC, told Mount Jackson’s Town Council during an update on the service last month that three buses would be used, one serving as a spare.

During the 18-month demonstration trial, 80% of the operating expenses will be covered by the Virginia Department of Rail and Public Transportation’s Demonstration Program, French said.

ShenGo Transit has a total budget of $449,267, though Shenandoah County and its six towns will each pay a fraction of that. The county’s share (excluding towns) totals $47,623 or about 10.6% of the overall budget, which French told supervisors last week was a “pretty remarkable return on investment when you look at those funds being leveraged.”

The county’s towns collectively will pay a similar amount (costs to each locality vary based on population) and outside of the $359,414 covered by DRPT, the remaining costs will be paid for through private-sector funding and fares.

French told supervisors that following the 18-month demonstration period, other grant opportunities could be pursued to help pay for the service’s operation.

“We hope that if this is successful, that we’ll continue to build out that service as time goes on,” French said last Thursday. “Maybe that’ll mean additional hours being added onto it. Maybe it means adding Sunday service. We’ve also talked about the future projections, it would be incredible to be able to have the service run up to, say, Lord Fairfax Community College (in Middletown), where it could be a connector for other regional transit systems throughout the northern Shenandoah Valley. So ideally one day somebody could potentially take the transit from Mount Jackson up to LFCC, transfer to a bus that would take them to Winchester or Front Royal.”

French added that being able to transport students from the county’s high schools and Triplett Tech who are dual enrolled with LFCC (soon to become Laurel Ridge Community College) to the latter’s campus via the new bus system would be a “great asset.”

French heaped praise on Taylor and her work on the project during last week’s presentation to county supervisors, calling Taylor “truly a wizard when it comes to transit” and adding that “we would not be standing here today if it wasn’t for her and her desire and drive to move us forward and work with us.”

Brandon Davis, executive director of the NSVRC, reiterated to supervisors that the regional commission would remain involved with the transit service after its implementation and, like French, spoke highly of VRT, which provides similar services throughout the state, including the Front Royal Trolley.

“They have honed their craft, I’ll say, as far as rural transit systems go and we have the utmost confidence in them as a contractor,” Davis said. “And we also get to take advantage of their experience but also their network of buses and human resources and legal, grant writing -- everything they have within their organization is much larger than just this one route.”

Thompson told supervisors last week that VRT has established a local office in Woodstock and has procured the buses, though he said the pandemic has made it difficult to find bus drivers. He did note that the size of the buses being used does not require drivers to have a commercial driver’s license, which has helped the recruiting process.

Thompson noted that VRT has emphasized further benefits to Shenandoah County by hiring local drivers and by signing a memorandum of understanding with Holtzman Corp. for preventative maintenance service of its buses and for fuel.

“We want to be a good partner, to make sure that your residents and your guests can reach medical locations, shopping, goods and services and everything,” Thompson said. “It’s gonna be a great service. We look forward to providing it.”

More information can be found by visiting ShenGoTransit.com or calling (540) 715-5706. ShenGo Transit is also on Facebook.