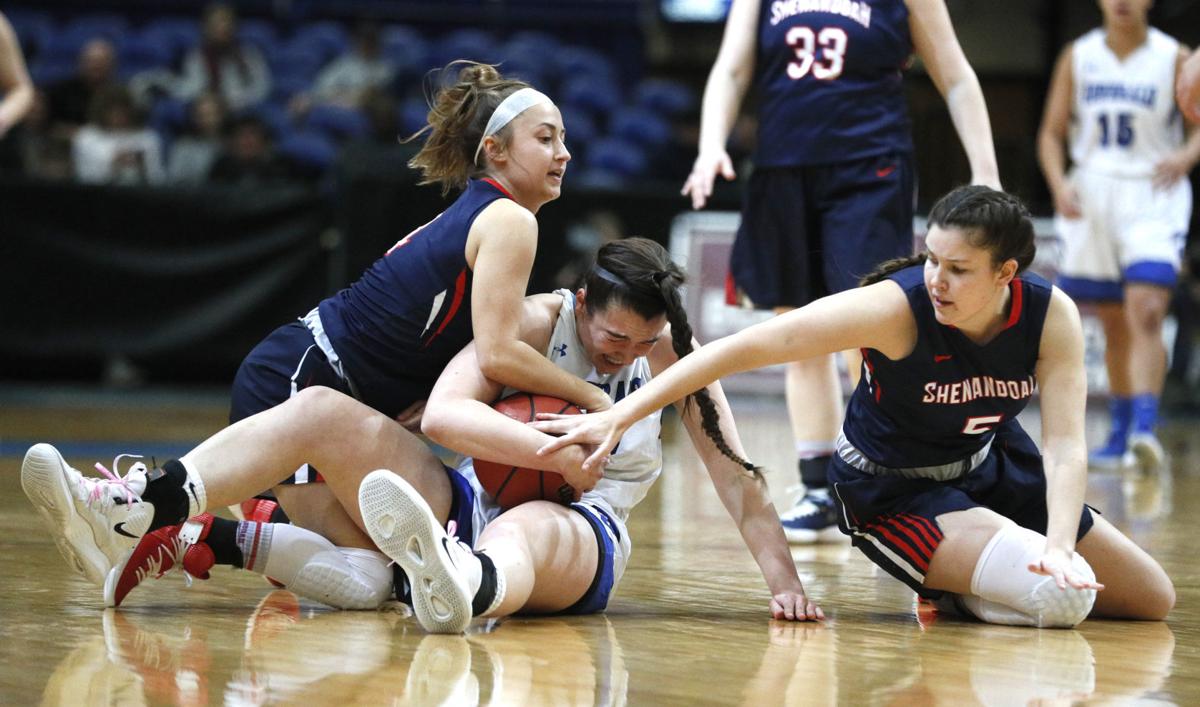 Shenandoah's Sarah Donley, left, and McKenzie Mathis have helped the Hornets hold opponents to 49.7 points per game in their last six games, all Hornet wins. SU (16-13) will play at DeSales University (25-2) in Center Valley, Pennsylvania, at 7 tonight in the first round of the NCAA Tournament. 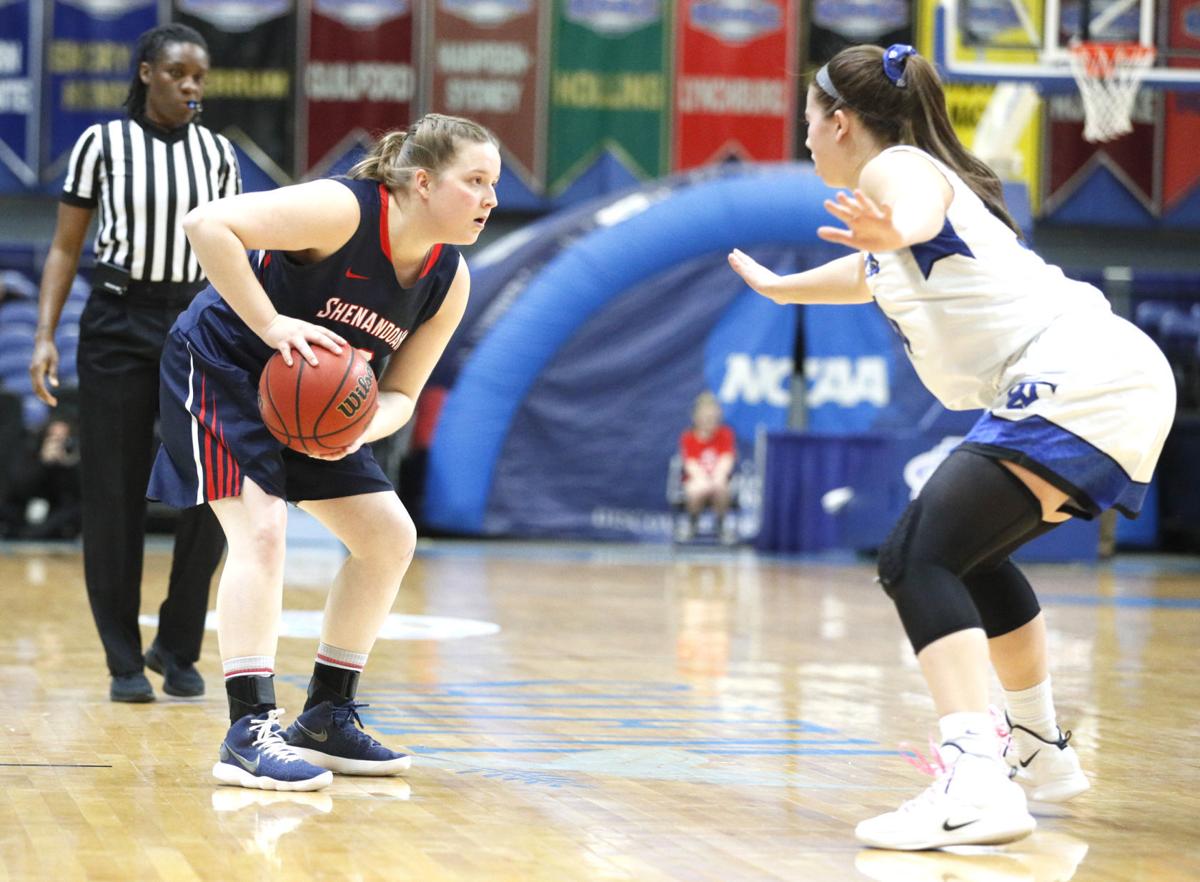 Shenandoah guard Shannon Kuhn, left, is the only senior on the Hornets' roster. Kuhn scored a total of 36 points in the Hornets' ODAC semifinal and championship game wins to win Player of the Tournament honors.

Shenandoah's Sarah Donley, left, and McKenzie Mathis have helped the Hornets hold opponents to 49.7 points per game in their last six games, all Hornet wins. SU (16-13) will play at DeSales University (25-2) in Center Valley, Pennsylvania, at 7 tonight in the first round of the NCAA Tournament.

Shenandoah guard Shannon Kuhn, left, is the only senior on the Hornets' roster. Kuhn scored a total of 36 points in the Hornets' ODAC semifinal and championship game wins to win Player of the Tournament honors.

WINCHESTER — When the Shenandoah University women's basketball team takes the floor today in Center Valley, Pennsylvania, for the program's first NCAA Division III Tournament game in 19 years, it will do so with the knowledge that its opponent has plenty of offensive firepower.

DeSales University ranks seventh in the nation with 79.6 points per game and hasn't been held under 60 points since November. Led by point guard Morgan Birmelin (a nation-best 7.6 assists per game), the Bulldogs rank 10th nationally in assist-to-turnover ratio (1.21). Four players average at least 12 points a game, and seven average at least 6.6 per game.

Those are just some of the reasons why DeSales (25-2) — which will host the 16-13 Hornets at 7 p.m. tonight in a first-round game at Billera Hall Gymnasium — is ranked 15th in the nation by d3hoops.com. (The game will be streamed online at https://athletics.desales.edu/watch/?Archive=421&amp;type=Live.)

Stopping the Bulldogs' 20-game winning streak will be extremely difficult. But after becoming the lowest-seeded team to win the championship in the 37-year history of the ODAC women's tournament last weekend at the Salem Civic Center, it's clear the Hornets aren't fazed by much — especially because of the way they're playing defense.

"I've never seen us play defense this well," said guard Shannon Kuhn, the team's only senior, during an interview before Tuesday's practice at the Wilkins Center.

Indeed, what SU is doing on the defensive end this year has been to marvel at, and it's going to be key tonight if the Hornets have any shot at continuing their string of upsets.

As fifth-year head coach Melissa Smeltzer-Kraft said after Sunday's game, she never would have expected this year's team to be defensive-oriented. On Tuesday, she said with a smile, "I tried to make them embrace that the whole season," but the last month of the season has brought out the defensive intensity in them.

Smeltzer-Kraft said the Hornets' offensive struggles this year are among the reasons for that. SU's scoring average is down from 61.6 to 57.3 this year. Leading scorer Ashley Stone went down with a season-ending knee injury on Feb. 5, but her scoring was down a point a game from last year. Fellow 2018 all-conference selection Jordan Sondrol's scoring average is down from 16.4 to 10.2. The Hornets also lost Kirstyn Arcata (13.3 points per game) from last year's team.

"Both Jordan and Ashley, their numbers were down this year, and even other kids on the roster, they have a tendency to think scoring is the only way to gain confidence," Smeltzer-Kraft said. "[The coaching staff] has really harped on the players the value of taking a charge. Diving on the floor for a loose ball. Rebounding. This is the first year I've been here I've been in the positive in the rebounding margin."

"It's been huge, having kids hold on to that ball," Smeltzer-Kraft said. "One-and-done, making sure that possession ends for the opposite team so we can get the ball going the other way."

Something else that has helped SU this year is varied defensive looks. A man-to-man approach has been the Hornets' identity in recent years, and it still is. But mixing in some more zone has played a role in thwarting opposing offenses more.

"Sometimes other teams will run four guards, and we've got six post players on our roster," Smeltzer-Kraft said. "We want to set the tone by keeping our bigs in, and [playing zone] has been a way for us to do that instead of having one of our bigs maybe have to guard a guard on the perimeter."

Kuhn (9.2 points per game) said the team's attitude in the last month has played a big role in playing at an even higher level on defense than it did in the first three months. The Hornets had never advanced past the ODAC Tournament quarterfinals in their first six years in the league, and Kuhn said the team knew that wasn't going to change if the Hornets continued to play like they were.

"A sense of urgency came about," Kuhn said. "The season was coming to an end, and we knew we had to start playing harder, or our season was going to be over. Everything's come together."

Smeltzer-Kraft said SU's sheer willpower to be stout on defense was on display this weekend.

"I'd say during a timeout, 'We need a stop,' and they'd truly believe that that's as simple as the solution was," Smeltzer-Kraft said.

Smeltzer-Kraft said SU did a great job contesting shots against Washington & Lee in the championship game. The Generals' three All-ODAC performers — Taylor Casey, Erin Hughes and Andy Smithey — have combined to average 40 points a game this year, but they were held to 8-of-33 shooting against SU. Smithey (11.9 points per game) was held scoreless in 31 minutes on 0-5 shooting.

The Hornets will need to knock another standout off her game tonight in Desale's Birmelin. In addition to her 7.6 assists per game, the senior is averaging 3.6 steals and 12.6 points per game. She was named the Tournament MVP for the Mid-American Conference Freedom division tournament. In the 75-59 win over Misericordia in the title game, Birmelin had 19 points, eight assists and five steals.

"She's peaking and playing the best basketball of her life right now," Smeltzer-Kraft said. "She's poised. She just plays with extreme confidence. A high priority is going to be keeping her out of rhythm and keeping her on her toes."

"We've got to keep them off the glass because whoever controls the glass is going to control the ball obviously," Smeltzer-Kraft said.

While SU likes the way it's playing defense, its strength in that area will be moot if it can't routinely set up its defense. The Bulldogs are forcing 25 turnovers per game, nearly 10 more than their opponent's force, and are allowing 52.8 points per game.

"They play full-court man, in your grill," Smeltzer-Kraft said. "They're going to bring it for 40 minutes."

Smeltzer-Kraft said Emory & Henry and Marymount are the best comparisons to DeSales' defensive style. The Hornets lost to that duo in back-to-back games in November. Marymount held SU to a season-low point total, forced 23 turnovers and held the Hornets to 31 percent shooting in a 56-31 win.

SU is encouraged by the fact it's developed a lot of go-to players on offense of late. Four different players have led the Hornets in scoring during their winning streak, with ODAC Player of the Tournament Kuhn doing so three times. Kuhn had a total of 36 points in the ODAC semifinal and final wins.

"Any kid can step up any night," Smeltzer-Kraft said.

The SU-DeSales winner will play the winner of tonight's John Carroll (22-6) and Middlebury (19-7) game in Saturday’s second-round game at DeSales. No matter what happens this weekend, SU won't forget the past week.

"It's been unbelievable," Smeltzer-Kraft said.

Smeltzer-Kraft said the team received an abundance of messages congratulating it this weekend. A large contingent that included SU president Tracy Fitzsimmons showed up for the championship game.

Sondrol said when SU arrived back on campus Sunday night, the men's basketball team, the field hockey team and other SU athletes and friends were waiting for them at the Wilkins Center.

Kuhn said faculty members and students that she hadn't even talked to before were congratulating her and asking her questions about what was next for the team.

"I'm so excited," Sondrol said. "So many people have told me that they're excited to watch us, and are excited we've gone as far as we have."

Smeltzer-Kraft said the Hornets are ready to keep fighting.

"We're going to give them our absolute best this weekend, and we're going to keep playing the way we've been playing," Smelzer-Kraft said. "They're a heck of a team, as is every single team in this 64-team tournament. We're excited."