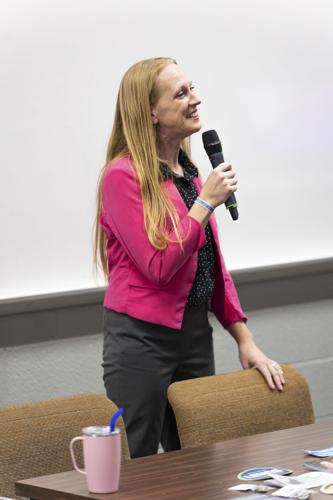 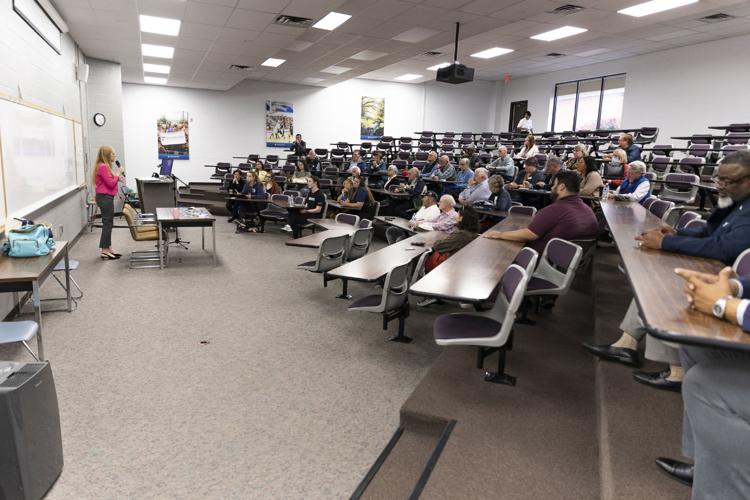 Congressional candidate Jennifer Lewis speaks during the "Conversations with a Candidate" event Wednesday at Shenandoah University.

Congressional candidate Jennifer Lewis speaks during the "Conversations with a Candidate" event Wednesday at Shenandoah University.

Lewis is challenging incumbent Rep. Ben Cline, R-Botetourt, for the 6th Congressional District House seat in the Nov. 8 election. Cline was also invited to attend, but told organizers told he would not be available before Election Day.

The recently-redrawn 6th District runs along the Interstate 81 corridor and stretches as far south as Roanoke County. It includes Winchester and Frederick, Clarke, Shenandoah and Warren counties.

If she were to win the election, Lewis said she will remove her figurative Democratic hat and serve as an Independent.

“I’m representing everybody,” she said.

Wednesday’s forum, which was presented in a town hall, question-and-answer setting, had been postponed from last Wednesday but still attracted more than 40 attendees from around the community.

“I’m so energized,” Lewis said after the forum. “Hearing from young folks is very energizing to me.”

Lewis, a mental health professional who works in Charlottesville, noted that mental health continues to be a huge issue in America. She spent a large portion of the forum answering questions about ways to improve support for area residents.

People who need mental health must travel too far, she said, and waiting lists are way too long. She stunned the crowd when she said that parents of young, differently-abled children are often told there is a six-year waiting list to have a government-subsidized professional assigned to their home. This can leave parents without a day off for up to a third of their child’s developmental years while they care for their child’s every need in managing tasks like bathing or eating or using the bathroom. Having no help that’s covered by insurance or government assistance has a negative effect on families, including other children in the home, she said.

Lewis hopes to secure more funding for mental health services in the district. Doing that, she said, will prevent residents from traveling long distance while also attracting qualified and compassionate professionals to the area.

“We just don’t pay them enough to stay in business,” she said of specialty care facilities.

She also fielded questions about environmental concerns, which she said was her first passion after growing up on a dairy farm and seeing the ill effect that can have on the land and waterways.

Addressing alternative methods of treating pain, she recalled a trip to the Highland County Maple Festival a few years ago when she was amazed to see that the line for CBD massages was longer than the line for pancakes and started to realize then the demand for alternative pain relief methods around the area.

“The police have a very important role in our society,” she said. “Now, do I believe that they need to be reformed? Yeah, for sure. But do I think that we need to get rid of the police departments and the service that the police officers do in our communities? Oh my gosh, no, that would be very dangerous.”

Lewis stressed that police need more support on mental health calls instead of stretching themselves thin. Sometimes, she noted, an officer will have to sit with patients in the hospital for two or three days before they can get a bed.

Police should be trained for these situations, she said, but added, “We need to take that responsibility off their plate and put it on mental health professionals.”

Wednesday’s event was organized by 19-year-old Liberty “Libby” Tennyson, a sophomore who’s triple majoring in history, political science and global studies. She is also the voter engagement coordinator for the school's Center for Civic Engagement, which is teaming with other campus groups that include The Good Girl Movement, First Generation, the Black Student Union and Men United for Excellence on an event that will offer food, music and transportation to polling locations. The center also hopes to partner with campus athletic groups. She explained it is a non-partisan group with a mission of informing people on the importance of voting.

Though they pretty much achieved the 45-50 attendees that Gibson hoped for, based on the RSVPs their event received through social media, Tennyson, a Michigan resident, said she was surprised that it was mostly community members who attended.

Of the 42 attendees, approximately 10 were students, at least 12 were about 65 or older, seven were people of color and about 20 were women.

The audience also included Winchester School Board member Brian Pearce-Gonzalez and four Winchester City Council members — Phillip Milstead, Evan Clark, Madelyn Rodriguez and Vice Mayor John Hill — said Hill, who pointed out that they were sitting separately and stressed that they were there by coincidence.

Erin Spaulding, 19, of Philadelphia, was one of the forum's 42 attendees, and said she came "to get informed and educated" since she is unfamiliar with Virginia politics.

Sophia Loukopoulos, a 21-year-old graduate student, said she “wanted to get to know the candidate.”

“I’ve always been a Democrat,” Loukopoulos said, “but I understand other people’s perspectives and Independents wanting to work with people across the aisle. That’s definitely a big issue since a lot of things do get gridlocked in our political system.”