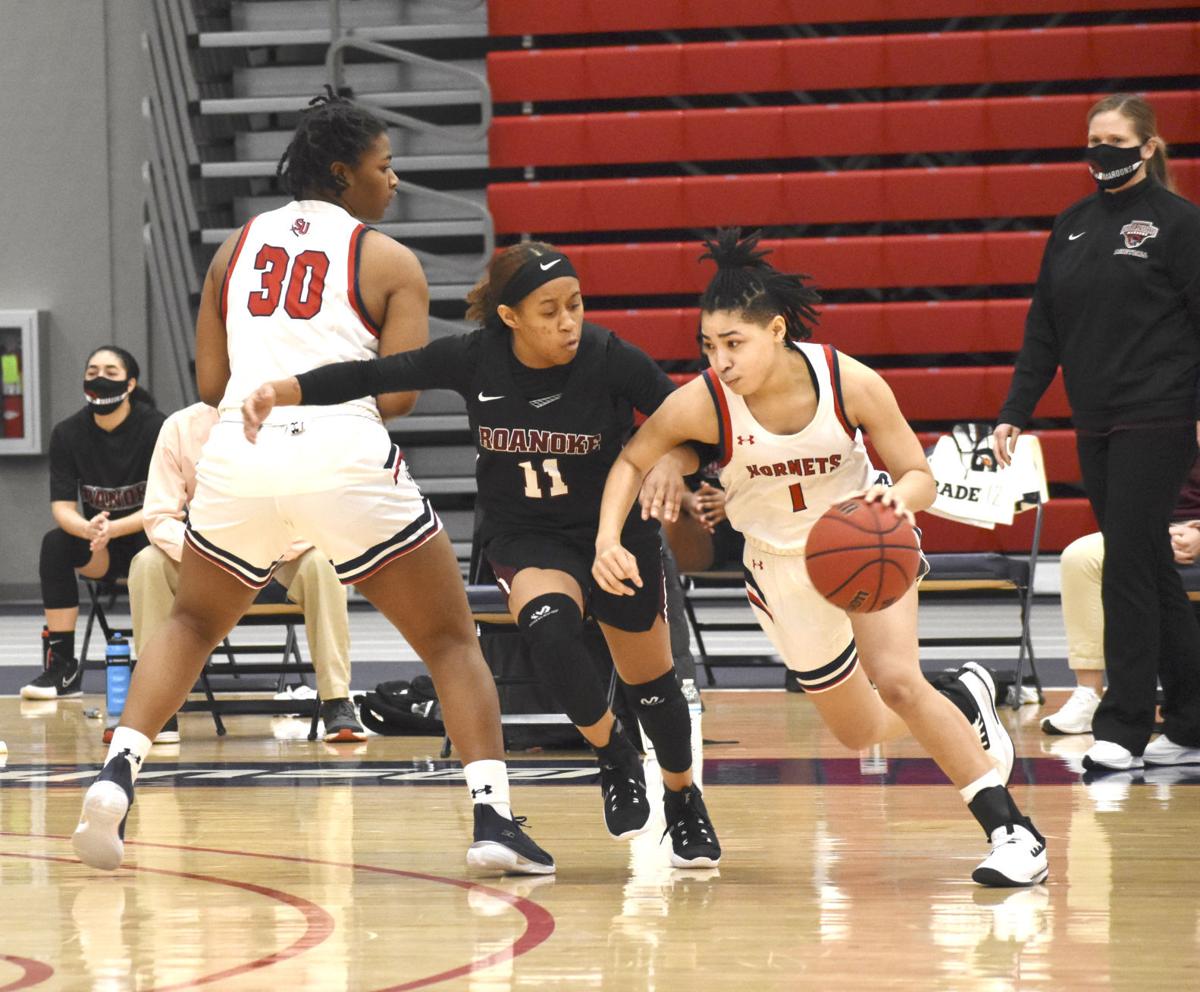 Shenandoah’s Sierra St. Cyr dribbles toward the basket following a screen by Ragan Johnson (30) as Roanoke’s Whitney Hopson defends. St. Cyr had 16 points and nine rebounds in the Hornets’ season-opening 65-52 loss to Roanoke. 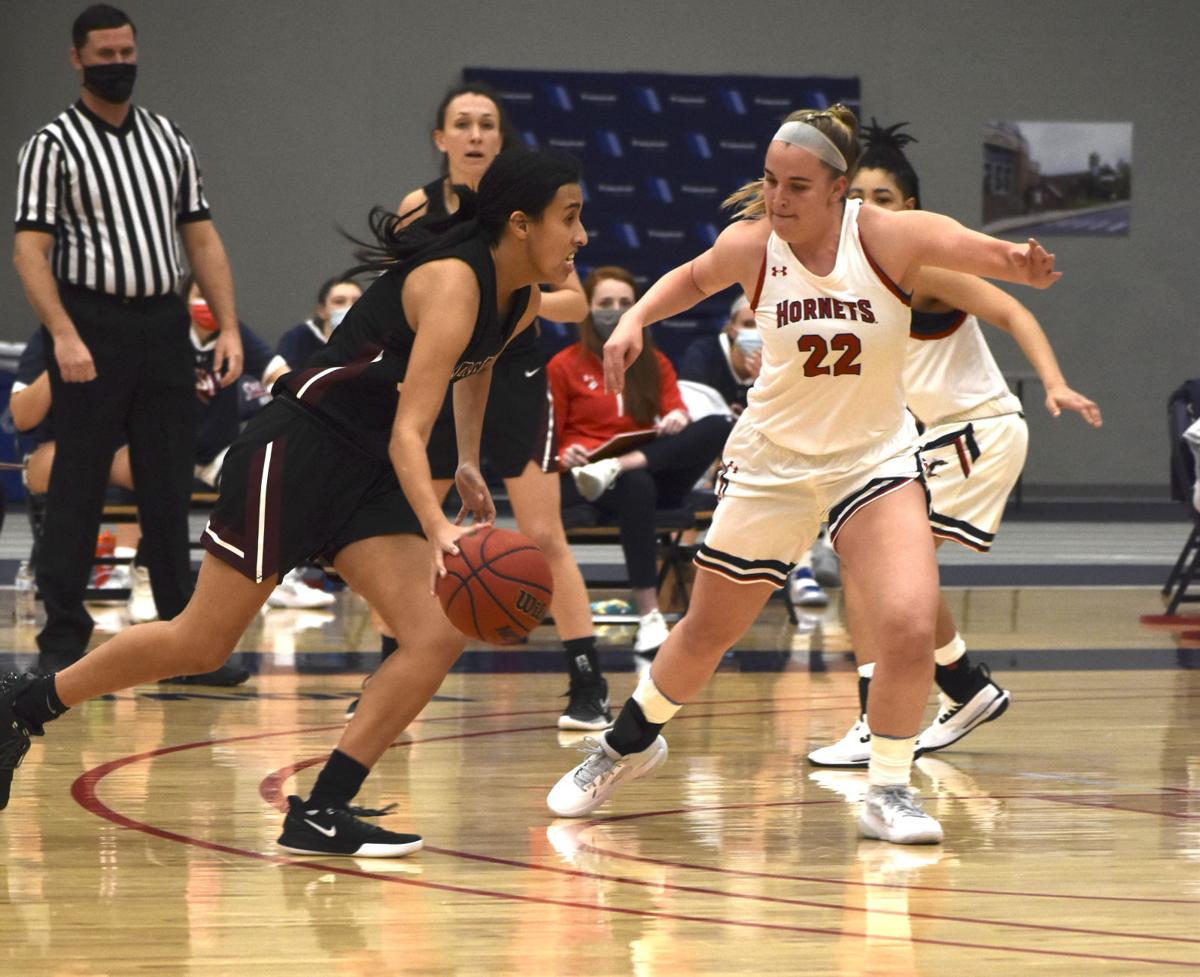 Shenandoah’s Sierra St. Cyr dribbles toward the basket following a screen by Ragan Johnson (30) as Roanoke’s Whitney Hopson defends. St. Cyr had 16 points and nine rebounds in the Hornets’ season-opening 65-52 loss to Roanoke.

If the Hornets can find their groove – and suit up a more complete roster – the rest of the Old Dominion Athletic Conference will need to be ready.

ODAC preseason favorite Roanoke took the lead for good with 2:50 left in the first quarter. But SU stayed within striking distance until the Maroons hit two big 3-pointers in the last 2 1/2 minutes to pull away for a 65-52 win in the season opener for both teams at the Wilkins Center.

On their 14-player roster, the Hornets have eight freshmen, only five of whom were available on Thursday. As time goes on during the 12-game season, SU coach Melissa Smeltzer-Kraft said those freshmen should get more comfortable and gel better with the veterans.

“There’s lessons to be learned about spacing, and our defense,” Smeltzer-Kraft said. “Nothing but fixable things to look at despite a loss that looks worse than it was [because of the score], and we’re going to work hard to get better at those things.

“I think Roanoke is a fantastic team, and I’m glad we played a great team to start out the year. [This season] is going to be a sprint, and you need to bring your ‘A’ game every opportunity. I’m excited that we hopefully get to play them again, that’s for sure.”

While SU was ecstatic to be playing its first game since Feb. 27, 2020, the preseason No. 5 pick of the ODAC coaches left the Wilkins Center knowing there’s a lot of work to do.

In the first half, the Hornets were hammered on the boards (23-15 for Roanoke, including a 9-2 edge on the offensive glass) and got hammered at the free throw line (the Maroons made 14 of 16 while SU made 6 of 7).

An 8-0 Roanoke run keyed by two baskets off turnovers and two free throws after a fastbreak opportunity gave the Maroons a 37-25 halftime lead that proved too much of a hole for SU. Roanoke extended the run to 10-0 to start the second half, and the closest the Hornets would get from there came on Ragan Johnson’s basket off the glass from underneath the basket with 5:44 left that made it 53-48.

A 3-pointer from the top of the arc by Renee Alquiza (20 points, five rebounds) with 2:21 left made it 60-50, and a 3-pointer from the right wing by Kayla Kinsler (11 points, six rebounds) as the shot clock buzzer went off with 1:27 left brought screams from the Maroon bench and iced the game at 63-52.

With its depleted roster, SU started the game in adjustment mode, and its foul situation didn’t help. Starters Johnson (8 points), Brooke Riley and Madisen Kimble combined for seven fouls in the first half.

Smeltzer-Kraft said SU might have been able to run its offense better if it had its full roster and limited its fouls. The Hornets made only 9 of 24 field goals in the first half and had 12 turnovers.

“I think we put a lot of weight on Sierra,” Smelter-Kraft said. “She played 37 minutes and did the bulk of bringing up the ball. I think we can do a better job using freshmen to help alleviate that weight.”

St. Cyr gave Roanoke fits with her quickness, particularly in the first half when she never left the floor. She produced 12 points, five rebounds, three steals and two assists in those 20 minutes, and made 4 of 5 free throws.

Smeltzer-Kraft said the Hornets needed to do a better job with fastbreak points (Roanoke had a 17-4 edge) and with rebounding. SU made huge strides in the rebounding department in winning 32 games over the last two seasons (the Hornets were plus-5 last year), but being minus-8 and the first half and minus-9 (46-37) for the game on Thursday was difficult to overcome.

“Our boxing out was one thing we talked about at the end of the game that we needed to work on,” Weinel said.

SU was just glad to have some postgame adjustments to talk after not having played one in 329 days.

“It felt very good to be back on the floor night,” said Weinel, who will get her next chance at 7 p.m. on Tuesday at home against St. Mary’s College of Maryland. “This is the moment that a lot of us had been waiting for a long time.”