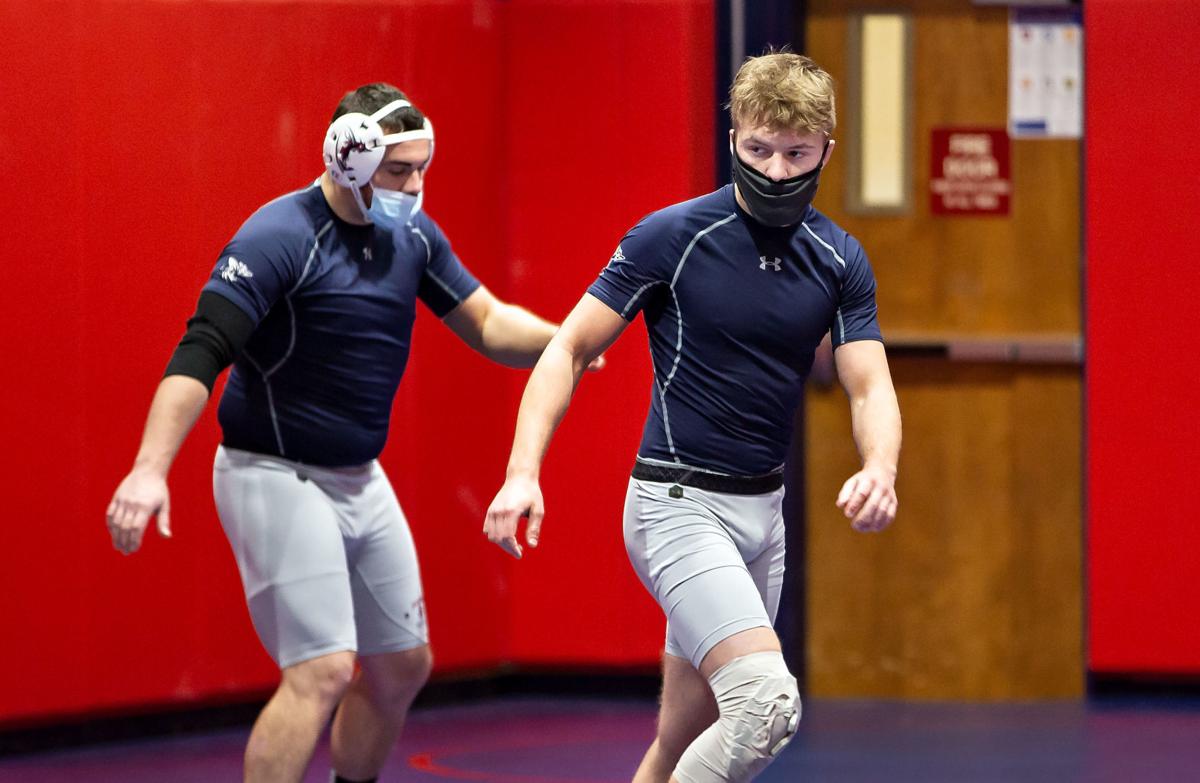 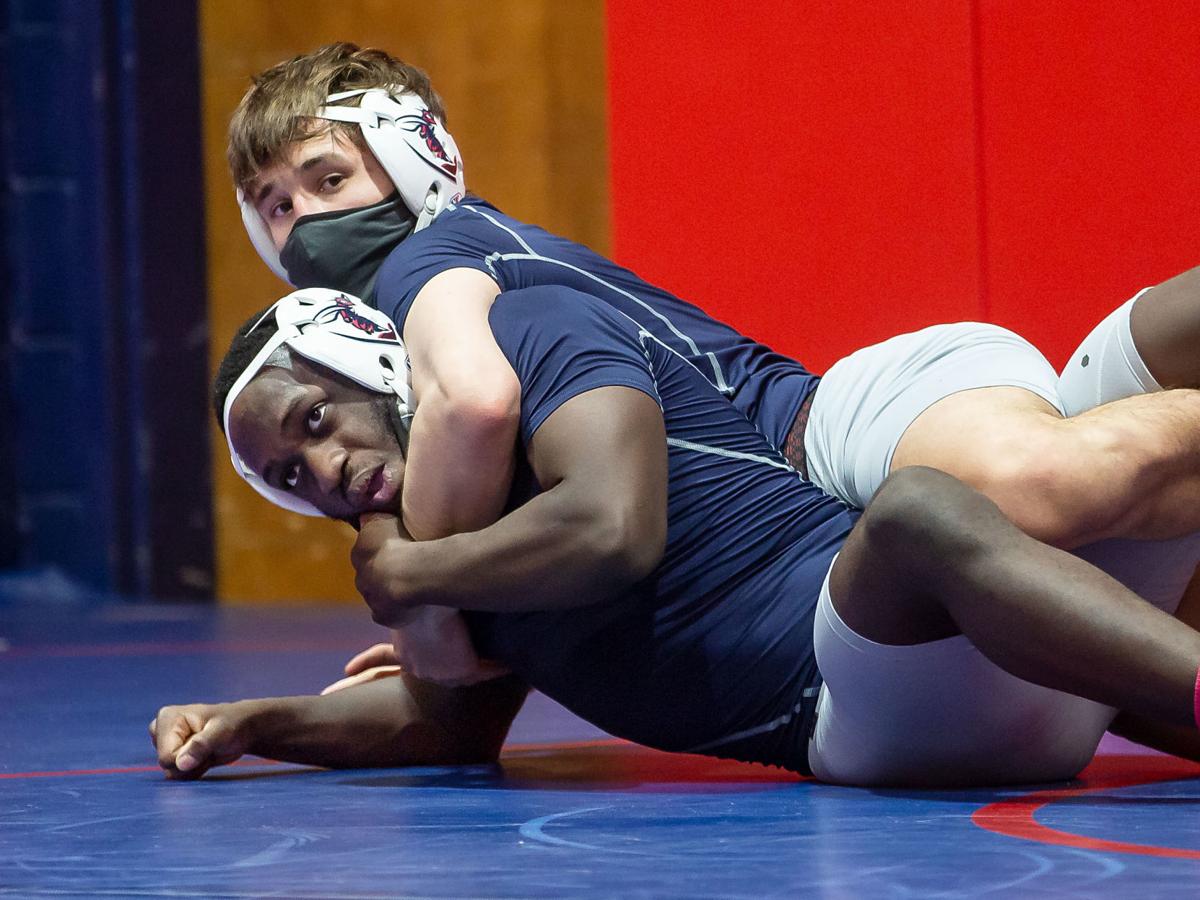 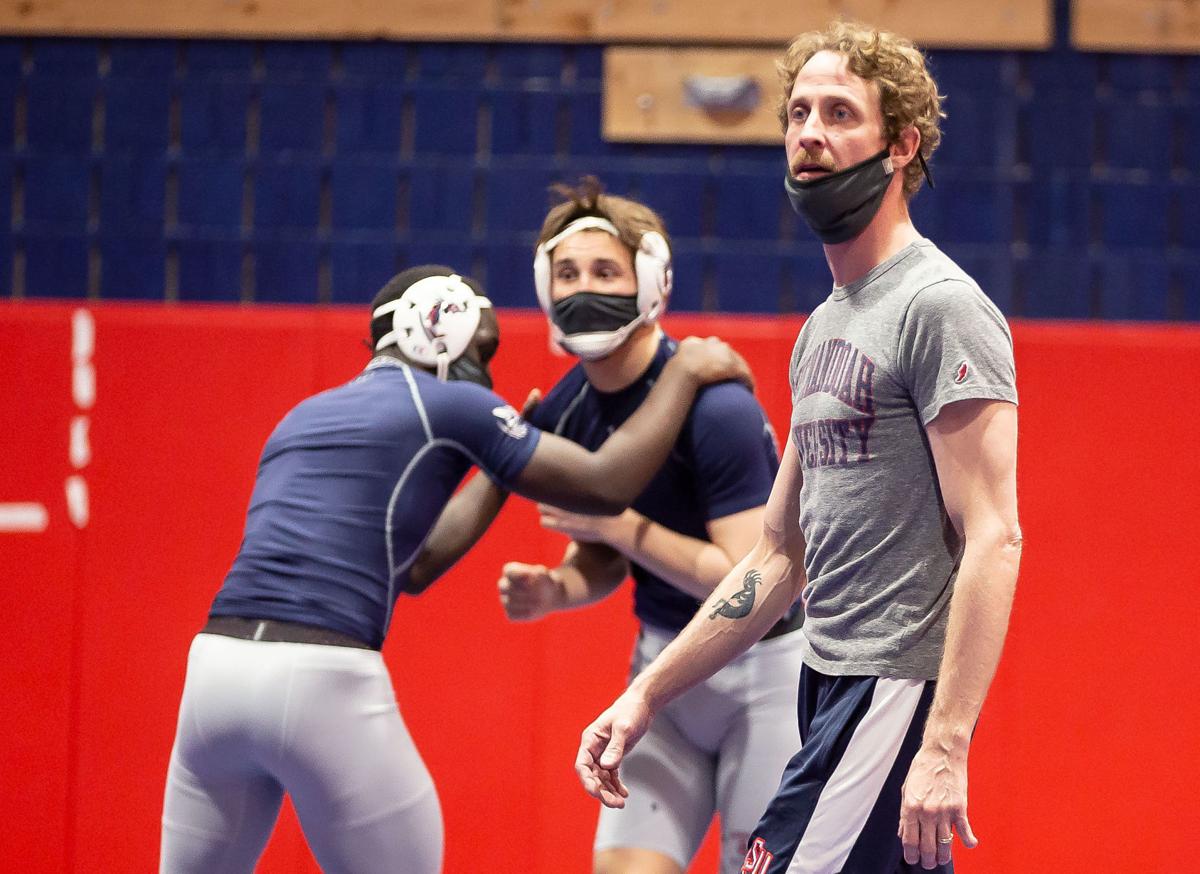 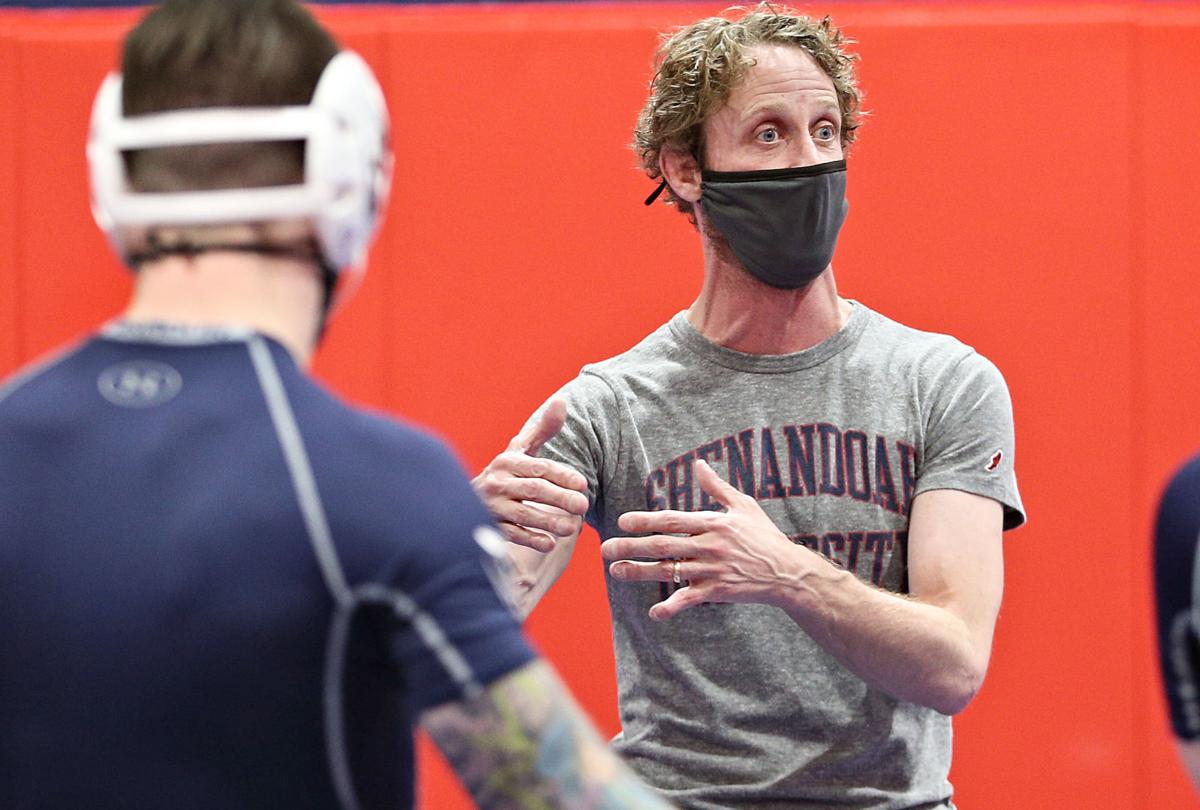 Shenandoah University head coach Tim McGuire talks to his wrestlers before the start of practice on Thursday.

Shenandoah University head coach Tim McGuire talks to his wrestlers before the start of practice on Thursday.

After nearly a year of navigating his new program through COVID-19 and a months-long delay to the wrestling season, Shenandoah University head coach Tim McGuire will finally lead his team onto the mat for the first time this weekend.

It will be a major milestone for the Hornets, who are set to compete at the U.S. Marine Corps Star City Classic hosted by Roanoke College at the Salem Civic Center this morning. Not only will it be the first-ever event for Shenandoah’s new wrestling program, but it will also mark the end of a 310-day sports hiatus for the university, which shut down all intercollegiate activities in mid-March in response to the ongoing pandemic.

It hasn’t been a smooth road, and as recently as last weekend it was uncertain whether the Hornets would indeed open their wrestling season this weekend. SU was extra cautious when it suspected a member of the program may have had COVID last week, McGuire said on Wednesday, and the Star City Classic was briefly removed from the schedule. Multiple rounds of testing have since cleared the Hornets.

Despite the ups and downs and the general uncertainties that remain as part of trying to play a sports season in a pandemic, McGuire said the Hornets’ day-to-day process has finally reached the point where they can look ahead with enthusiasm to the tournament – and the season – that’s in front of them.

“There’s a lot of excitement, for sure,” Hornets freshman Dylan Weaver said on Thursday. “It’s been off and on, so we really had to turn that switch literally off and on. But we have some pretty good guys with some good minds. We’ve been staying in-tune, staying in it.”

Shenandoah will send eight wrestlers in six weight classes to the Star City Classic: Morgan Robinson and David Smith at 149 pounds, James Felix at 157, Hunter Thompson and Thomas Domerese at 165, Weaver at 174, Elijah Mosley at 197 and Anthony Olsen at 285.

The opener is the first of six scheduled events for the Hornets this season before the NCAA Division III regionals begin at the end of February.

“We’re here to win right now,” McGuire said. “We talk more about just getting better every day. When we talk about expectations, it revolves a little bit more around how we carry ourselves and our character, what we expect of ourselves on a day-to-day basis, knowing if we can manage the smaller little things that the larger whole is gonna be taken care of.”

With a roster of 11 freshmen – McGuire said the Hornets lost about 10 other potential wrestlers for various reasons related to the pandemic – Shenandoah will fill only seven of the 10 weight classes during duals this season. That immediately puts SU in an 18-point hole against opponents who field full lineups, placing an even bigger importance on bonus points. McGuire thinks the Hornets are built with the talent to make up for its lineup holes.

The first-year head coach said SU is “very strong” at the five weight classes between 141 and 174 pounds, noting that Weaver at 174 has been “pretty special” in the wrestling room and is the type of teammate that makes everyone around him better. McGuire added that Anthony Olsen at 197 has been wrestling “extremely well” and thinks he’ll “come in and surprise people.”

“If Morgan can get in and lock up one of his cradles and get a pin, that makes up for one of the forfeits that we gave up earlier,” McGuire said. “Other guys like Patrick Coffron are very good with the legs up on top, so he’s another one who can score some bonus points on top. Those guys can actually make up for some of our deficits.”

SU’s head coach said a handful of Hornets should be in the mix for notable postseason success in Year 1.

“There’s a chance we’ll have five guys competing to go to nationals,” McGuire said. “I expect to have two or three guys make the NCAA tournament if everything goes right. They’re working very hard.”

Despite the mitigation protocols in place during practice, which include social distancing and masks worn throughout, Robinson and Weaver said their training for the upcoming season has gone well. McGuire commended his wrestlers for being conscious about limiting outside contact to ensure they stay healthy and able to wrestle.

“Tim is doing a really, really good job of holding us accountable,” Robinson said. “He’s pushing us, not just as a team, but he’s individually texting us, letting us know how the day went. He’ll come up to us and tell us what he likes, what he doesn’t like, no matter what it is.”

In an announcement earlier this week that surprised no one, Shenandoah University stated that no spectators would be allowed at its indoor athletic events this semester. Though they all understand the decision, Robinson and Weaver expressed disappointment that their families would be barred from watching them compete in their inaugural college season, and McGuire too said he was disappointed that the Hornets wouldn’t be able to provide some wrestling to a local area that at this point is “hungry” to watch the sport.

“It would’ve been really nice to have Shenandoah be able to provide that for the community,” said McGuire, whose team is scheduled to hold its home opener on Jan. 24 against Garrett College. “At the same time, we have worked way too hard to keep ourselves healthy and to do the right things so that we are allowed to have a season that I agree with no fans. I don’t want to take any risks that could close down the season. At this point, the students have made a lot of sacrifices to get to this point that we just need to hold together for another two months and we can get through this. Anything that we can do that allows us to wrestle, I’m for it.”