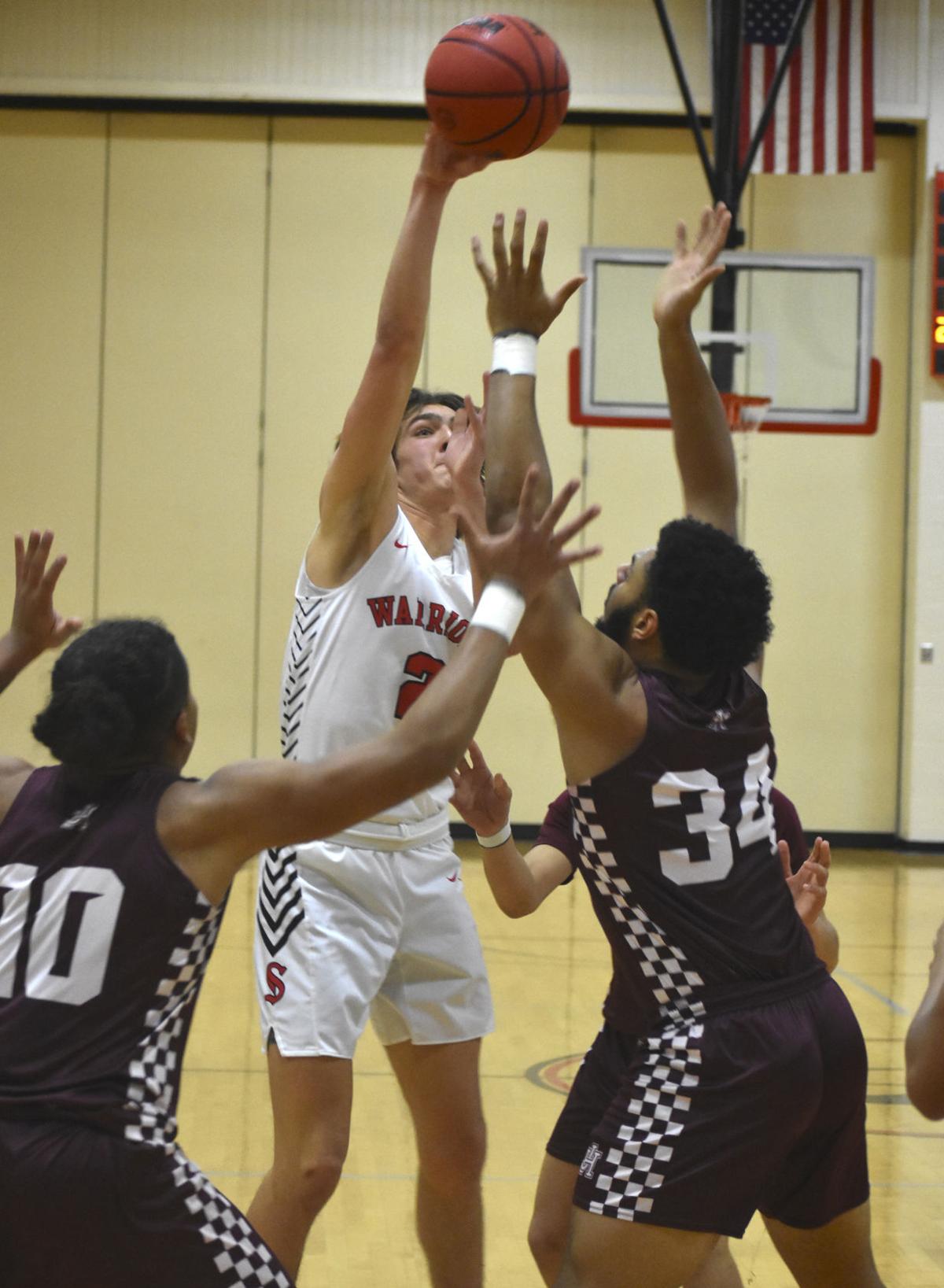 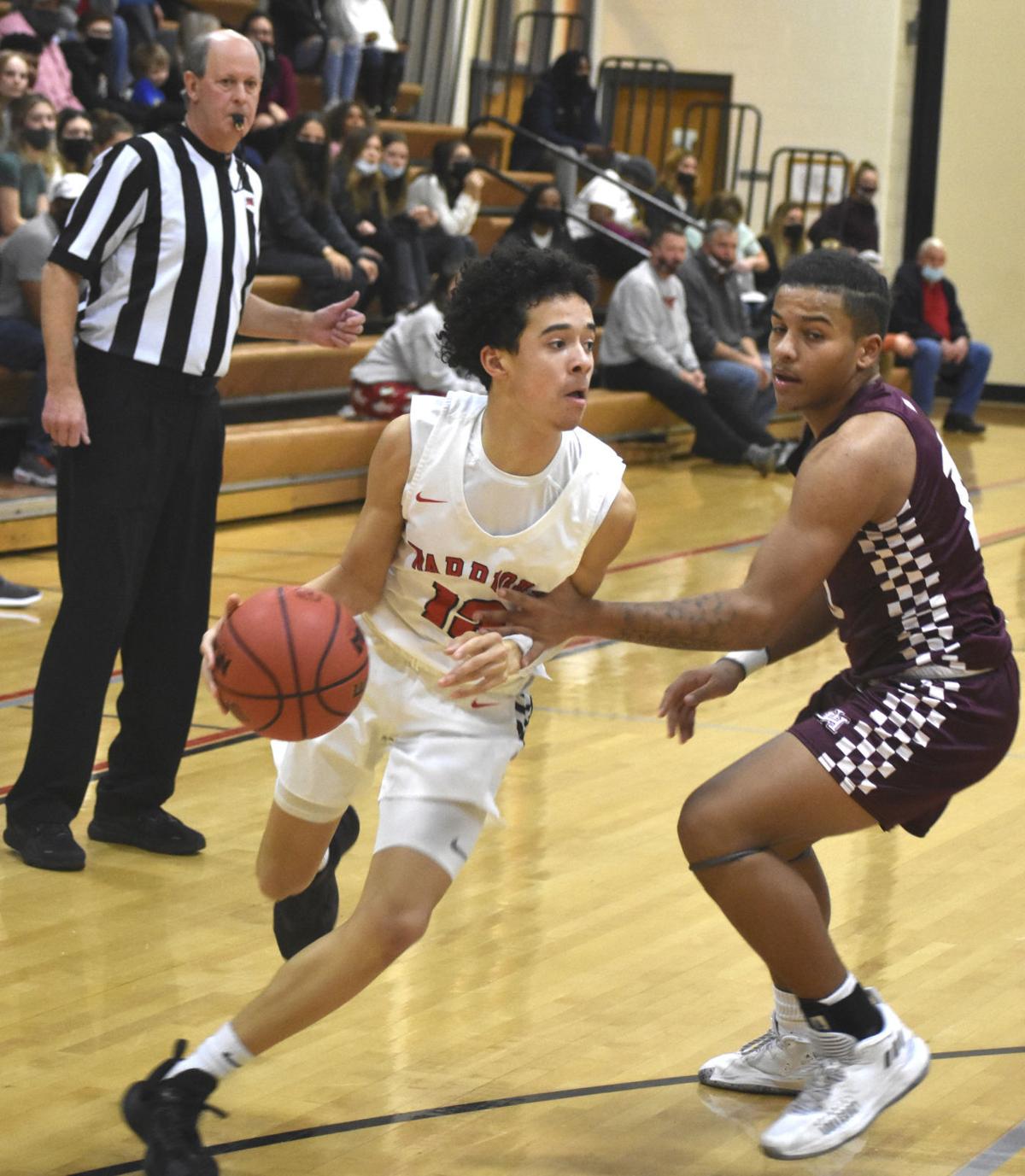 Sherando's Trey Williams, left, drives around Handley's Emerson Fusco in the first half of the Warriors' 64-60 Class 4 Northwestern District win at Sherando on Thursday. Williams scored 14 points and was one of four Warriors in double figures.

Sherando's Trey Williams, left, drives around Handley's Emerson Fusco in the first half of the Warriors' 64-60 Class 4 Northwestern District win at Sherando on Thursday. Williams scored 14 points and was one of four Warriors in double figures.

Based on how most of Thursday's game went, Crittenden and the rest of the Warriors boys' basketball team would have been kicking themselves hard enough to cause a limp if they had fallen again to the Judges. But for the second time this week, Sherando came up big in the clutch to get some revenge.

Handley trailed by 15 points three minutes into the third quarter, and with 35 seconds left the Judges had the chance to take their first lead of the game after Sherando committed its second turnover in about 10 seconds.

But with the Warriors up by two, Sherando's Kellen Tyson took a charge against area scoring leader Emerson Fusco with 23 seconds left. Crittenden then capped Sherando's incredible 22-of-26 performance from the free throw line knocking down both of his free throws with 17 seconds left to make it 64-60, and that wound up being the final score after Handley failed to sink any of its last three field goal attempts.

Sherando — which never trailed on Thursday — has now won four straight games since losing 61-51 to Handley at Handley's Maddex-Omps Gymnasium on Jan. 4. That winning streak includes Monday's 54-53 win over Musselman (W.Va.), when Lazare Adingono connected on a 12-foot shot with five seconds left after the Applemen went up 53-52 at the 20-second mark. Musselman had previously beaten the Warriors (9-6, 4-1 Class 4 Northwestern District) on Dec. 21 by a 56-48 score.

The victory over the Applemen was exciting, but it wasn't as meaningful as taking down a local district rival in Handley (4-8, 2-3), which did not have head coach Zach Harrell present to lead the team on Thursday.

"This is the biggest win of the season, by far," said Crittenden, who scored nine points and knocked down 7 of 8 of his free throw attempts. "We're on a roll now."

With Sherando's 2-3 zone putting Handley out of rhythm and sophomore guard Trey Williams (14 points) keeping the Warriors in tune with starting point guard Amari Williams unable to play, Sherando was rolling most of the game.

The Warriors made 7 of 10 field goal attempts in the second quarter, with Zach Symons (14 points) knocking down two 3-pointers, to take a 32-21 lead at the half.

Sherando's zone paid off in the first half, as the Judges launched from the outside with minimal success. Handley (20.9 percent from 3-point range in its first 10 games) attempted nine field goals in the second quarter and six of them were 3-pointers. They only sank two 3's in the quarter and three in the half.

"I thought we did a good job moving the ball in the first half," Sherando coach Garland Williams said. "We got open looks and were being patient. Defensively, I thought we did a good job of moving and setting our feet. They were driving and we got some charges on some key people. They missed some shots, and we were able to get some rebounds and go down to our end and get the shots that we want."

But with the Warriors up 40-27 halfway through the third quarter, Handley's Tavon Long and Quincy Dinges (15 points each for the game) caught fire from beyond the arc.

The duo combined for nine 3-pointers on Thursday (Long had five and Dinges had four), and they connected for five over the last four minutes of the third quarter to cut the Warriors' lead to 47-42 entering the fourth, the closest the game had been since it was 13-10 early in the second quarter.

The two teams went back and forth in the fourth quarter. But Sherando seemed to be in firm control after the Warriors beat the full-court trap that the Judges went to halfway through the period, with Trey Williams scoring on a layup to make it 61-52 with 2:47 left.

But the Judges answered with an 8-0 run. The stretch started with two 3's by Long and ended with Fusco stealing the ball from Williams near midcourt. With no one in front of him, Fusco took the ball in for a layup to make it 61-60 with 1:20 left.

That Fusco steal started a closing stretch in both teams struggled mightily to possess the ball. The Warriors turned the ball over right after the Fusco layup, but Dinges' inbounds pass from underneath the basket in the front court was low and went out of bounds by the right sideline.

With the score 62-60, Fusco missed the front end of a one-and-one after drawing a blocking foul with 55 seconds left, with the rebound going to Sherando.

After three straight turnovers, the Judges had another chance to at least tie with 35 seconds left. Fusco drove the lane and threw the ball to Dinges outside the arc on the left wing. But before the ball made its way there, Fusco had crashed into Tyson (11 points) to send both players to the floor. Fusco pounded the floor once with his hand when the charge — his fifth foul — was called with 23 seconds left.

"We were having trouble hanging onto the ball at the end, but what ultimately led us to the win was Kellen getting that charge," Crittenden said."That was probably the biggest play of the game, getting us the ball back."

Six seconds later, Handley fouled Crittenden, and he calmly knocked down two free throws to make it 64-60 and essentially seal the game. The Warriors made 17 of 18 free throws in the second half.

Sherando was only sinking 56.7 percent of its free throws through 13 games, but the Warriors made 15 of 21 against Kettle Run on Tuesday.

"We responded and did what we needed to do on defense and with free throws at the end," Garland Williams said.

"I felt pretty good," Trey Williams said. "Usually I just try and set up my teammates, but when I can also hit shots, it's a good night for me."

"Trey did a good job for us as far as running the point the whole game," Garland Williams said. "He had to be the man. It was a big game for him. He really stepped up and did well."

Handley assistant coach Donald Finley said playing from behind all game and foul trouble took a toll on the Judges. In addition to Fusco, forward Isaiah Lavette's minutes were also significantly limited by fouls.

And as well as Handley shot 3's in the second half, the fact that the Judges made 14 fewer free throws (Handley was 8 of 14) than Sherando was too much of a differential to overcome.

"That [14] points right there, that's the ballgame," Finley said. "We've been trying to tell the kids that it's the little things. It's the layups missed, it's the free throws missed. We were prepared and knew what we needed to do, but there were so many defensive lapses that hurt us, too. Our inconsistency right now has us where we're at."

Jacob Duffy scored 11 points and Fusco had 10 for the Judges.

Handley next plays Tuesday at Kettle Run and Sherando hosts Fauquier on Tuesday.