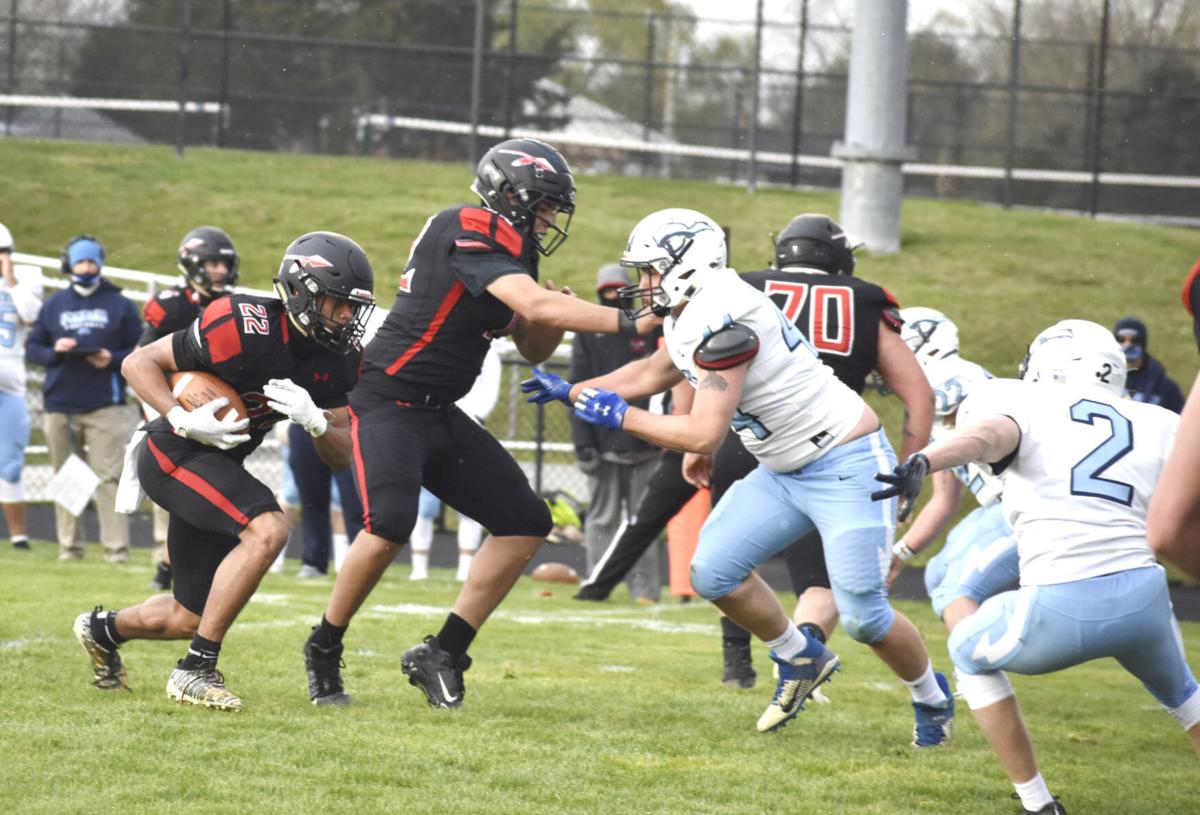 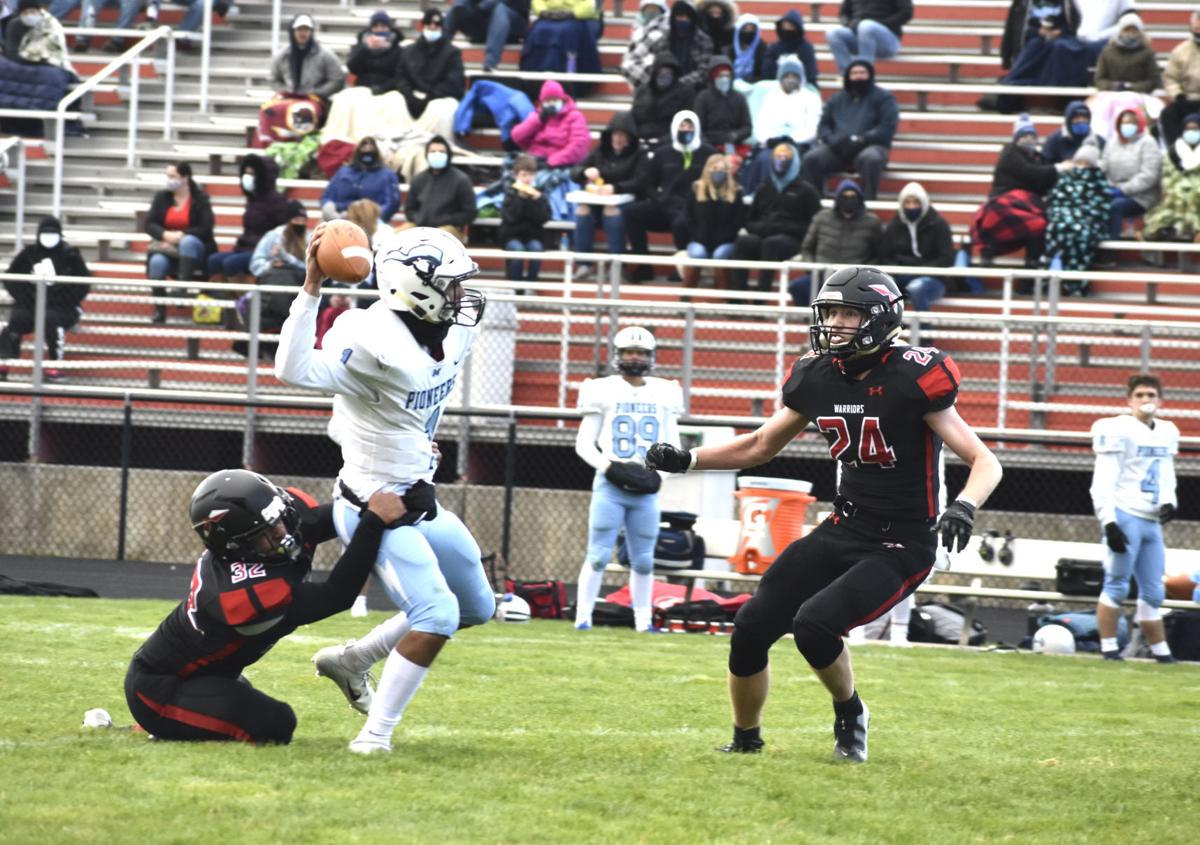 Millbrook’s Detric Brown was able to avoid this sack attempt by Sherando’s Matthias Rivera and complete a 22-yard touchdown pass to Josh Mihill in the first half, but Zach Symons, right, and the Warrior defense held Millbrook to 3 points and 104 yards in the second half. Overall, Brown was 25 of 37 for 291 yards.

Millbrook’s Detric Brown was able to avoid this sack attempt by Sherando’s Matthias Rivera and complete a 22-yard touchdown pass to Josh Mihill in the first half, but Zach Symons, right, and the Warrior defense held Millbrook to 3 points and 104 yards in the second half. Overall, Brown was 25 of 37 for 291 yards.

STEPHENS CITY — For a moment, it looked like Sherando junior running back Aydan Willis might have to wait another play to try crossing the goal line with just over two minutes to go in the first half, but then he flew into the end zone on his back.

“I’ve got to thank my O-line, and I’ve got to thank Keith [Gouveia] for pushing me in there,” said Willis, also a linebacker, of his game-tying touchdown. “I didn’t think I was going to make it at first.”

Sherando coach Bill Hall said the Warriors didn’t plan on running the ball as much as they did on Thursday at Arrowhead Stadium, but the Warriors’ offensive line pushed the ground attack to great heights when it was needed on a cold and windy day.

In the first Frederick County football game since November 2019, the Warriors emerged with a 31-17 win over Millbrook on an evening that featured 30-degree temperatures and winds that hit more than 20 mph.

The Warriors rushed 54 times for 309 yards (5.7 average) and threw the ball just 11 times. Sherando rushed for 73 yards on the 10-play drive that put the Warriors up 31-17 with 11:54 left in the game. The Warriors scored their previous 10 points following two Millbrook fumbles on kickoffs.

Millbrook sophomore quarterback Detric Brown did an outstanding job throwing the ball in the difficult conditions, and getting it out quickly to the flats and outside the numbers downfield. He completed 25 of 37 passes for 291 yards and one touchdown in his first start at quarterback for Millbrook, which ran the ball 14 times for 15 yards.

But Sherando’s pass pressure limited Brown and the Pioneers to just 104 yards and 3 points after halftime after they had 205 yards and 14 points in the first half, and Millbrook was unable to get back within striking distance after a Sherando drive in which three running backs contributed carries and quarterback Dylan Rodeffer (6 of 11 for 31 yards) had a 14-yard scramble.

Sophomore Gavin Blye (four carries, 66 yards, opened the scoring with a 58-yard TD run) finished it off with a 6-yard TD run off a direct snap to make it 31-17. The drive also featured Cameron Sullivan (27 carries for 139 yards total) and Willis (18 carries, 116 yards) running behind the blocking of Gouveia and his fellow offensive linemen Ethan Gonzalez, Charlie Wright, Parker Clendenen and Dante Hill and tight end Saxton Garver.

The 5-yard touchdown that Willis scored on in the first half ended an 80-yard, 5-minute-and-17-second drive that lasted 13 plays and featured 69 yards of rushing. The possession seemed to finally get Sherando going.

“There were a lot of fumble exchanges, bad snaps, things like that that were throwing us off schedule early,” Hall said. “We were pretty efficient with what we were doing [in the run game]. Obviously, the game plan wasn’t just to run the ball all the time, but when you have 20 mph winds, you had to adjust.”

Sherando did well running inside. Hall said the Warriors often looked to run to the right side of the line because they often used an unbalanced front that featured the usual left tackle Gouveia sliding over to the right side.

“We felt like our front was going to be a strong point for us this year, and I felt it was tonight,” Hall said.

Hall felt the Warriors also did a good job of responding when it had to. And they had to in the second quarter when Millbrook was rolling with momentum.

First, the Pioneers stopped Sullivan a yard short of a first down with 11:13 to go in the second quarter on their own 5-yard line after a 3-yard run. Millbrook went on a 10-play, 95-yard drive that was capped by a 13-yard touchdown run by Diante Ball (126 total yards, eight catches for 93 yards) to make it 7-7 with 8:27 left in the second quarter.

Next, Millbrook’s Jayden Banks recovered a fumbled exchange between Rodeffer and Sullivan at the Sherando 17. Two plays later, Brown made a highlight-reel play when he connected with Joshua Mihill for a 22-yard touchdown by hitting him at the 16 while being dragged down by Sherando’s Matthias Rivera near the 30. Patrick Sigler’s extra point made it 14-7 Pioneers with 7:20 left in the second quarter.

But Sherando turned to its running game to tie the game at 14, and then the Warriors came up clutch after a Millbrook mistake. A Pioneers player signaled for a fair catch for a kickoff, but he couldn’t haul the ball in and A.J. Santiago recovered at the Millbrook 27.

Six plays later, Rodeffer took full advantage of wide receiver Keli Lawson’s 6-foot-6 frame against the shorter Mihill. Rodeffer tossed a ball into the right corner of the end zone on fourth-and-3 from the 8-yard line that Lawson caught for a touchdown with 35 seconds left in the first half. Jack Hendren’s third extra point make it 21-14.

The Warriors kept the lead from there.

Wade Butler’s 24-yard field goal following a fumbled Millbrook kickoff return to open the second half that made it 24-14 at the 9:03 mark of the third quarter. (Hendren, also a starting cornerback for the Warriors, briefly left the game.) The Pioneers responded with an 11-play, 77-yard drive that ended with a 23-yard Sigler field goal to make it 24-17. But the Warriors responded with their impressive touchdown drive, and Millbrook could get no closer.

Hall said he felt the Warriors defensive front did a good job of allowing linebackers like Zach Symons (two sacks) to apply pressure, particularly in the fourth quarter.

The overwhelming theme from players and coaches on both teams was “we have a lot to work on.” Both teams were happy they have that chance to work toward improving for another game. Millbrook hosts Fauquier next Friday while Sherando travels to Culpeper.

“We came out, got after it and did the best we could,” Symons said. “We’re going to get better this week and come out harder next week.”

Hall said he enjoyed seeing the enthusiasm from his players.

“It’s like Christmas [in the locker room],” Hall said. “When something’s been held away, I think you realize how much it means to you. Their time together right now, and those experiences that they have on the field and in the locker room, those things are what makes it special.”