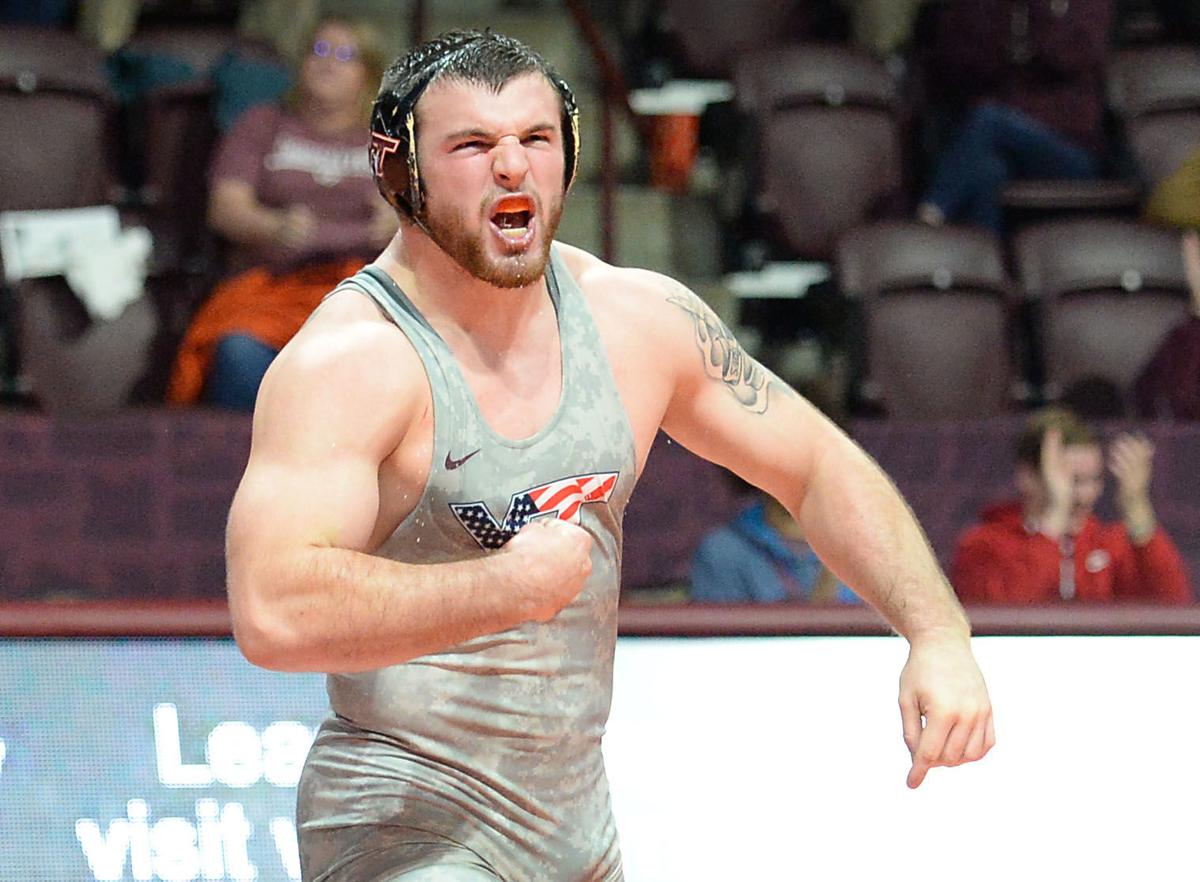 Sherando graduate John Borst celebrates during a match this season for Virginia Tech. The redshirt sophomore advanced to the NCAA Wrestling Championships, which were canceled due to the COVID-19 pandemic. 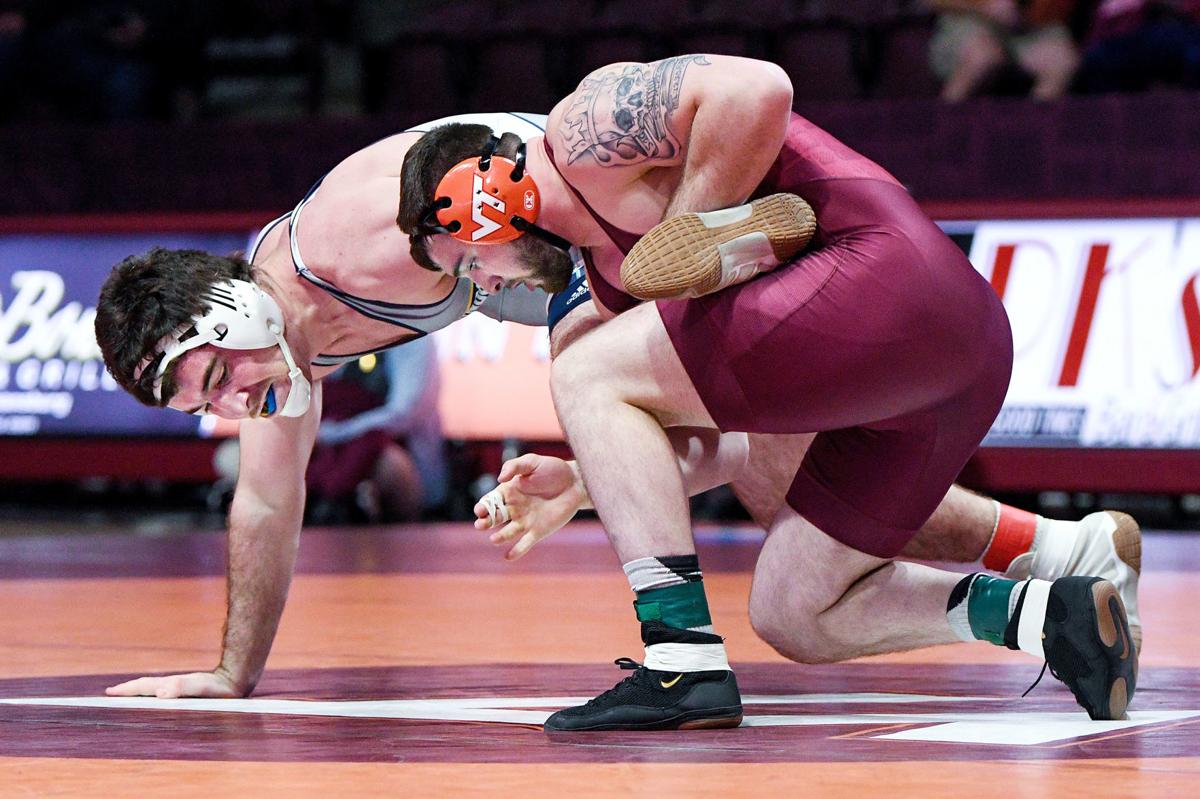 Virginia Tech’s John Borst wrestles in a match against Chattanooga earlier this season. Borst went 21-9 this season at heavyweight for the Hokies. 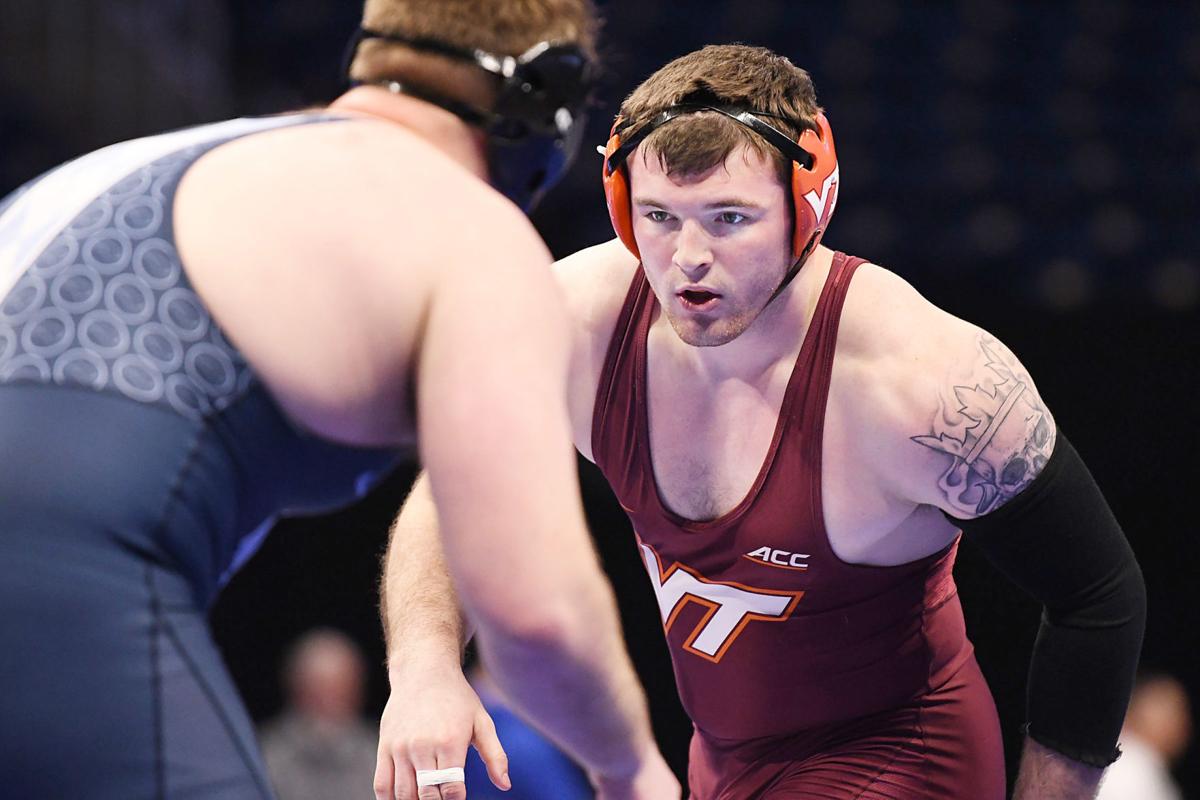 Sherando graduate John Borst celebrates during a match this season for Virginia Tech. The redshirt sophomore advanced to the NCAA Wrestling Championships, which were canceled due to the COVID-19 pandemic.

Virginia Tech’s John Borst wrestles in a match against Chattanooga earlier this season. Borst went 21-9 this season at heavyweight for the Hokies.

John Borst has been patiently waiting for his chance and this season he finally got it.

The 2017 Sherando graduate took his opportunity at Virginia Tech and ran with it. The redshirt sophomore wrestler qualified for the NCAA Wrestling Tournament on March 8 in the ACC Wrestling Championships in Pittsburgh.

“It’s everything I’ve been working for since I was four or five years old,” Borst said. “I watched the other big guys qualify for nationals and make it to the big dance, and so it’s exciting to finally achieve that goal of qualifying.”

Borst finished third in the heavyweight weight class, going 3-1 at the ACC Championships to punch his ticket to the NCAA’s.

He said the experience of participating in the ACC Championships was amazing.

“Its so much fun,” Borst said. “I truly believe that the bigger the stage that you’re on the better you’re going to wrestle. I think towards the end of the year I kind of slumped, I got into a little slump. I think I fired out of it at ACCs, and I started to catch fire at the end of the season.”

The NCAA Championships were scheduled for March 19-21 in Minneapolis, Minnesota.

However, Borst didn’t get a chance to wrestle in the NCAA Championships. The tournament was canceled because of the COVID-19 pandemic.

Borst said the players were all gathered together when they were told by Virginia Tech head coach Tony Robie that the tournament wouldn’t happen.

Borst said that he was more upset for the seniors on the team than for himself.

“Obviously, it’s very, very disappointing to hear,” Borst said. “You work endlessly for one common goal and it was more heartbreaking to see my senior teammates around me that don’t get that last chance more than anything else. We’ve all been working so endlessly non-stop. You put in hours and hours with these guys and it’s so hard to see them get let down like that — but it is what it is at this point.”

After winning three consecutive high school state championships at Sherando, Borst redshirted in his first year at Virginia Tech. He still wrestled in some matches and went 21-5, wrestling at 197 pounds.

He said that season helped him a lot.

“It helped me endlessly,” Borst said. “(Current Virginia Tech assistant coach) Jared Haught was just in his final year, the year he made it into the national finals and Ty Walz had just graduated and he was sticking around training. So I had so many guys in the room. So I didn’t have to worry about the stress of competing that freshman year because I was behind Jared Haught anyway. So it was really nice to just kind of focus on wrestling, focus on myself. And getting into college was, obviously that curve of school is different, so to adjust was huge.”

Last year, Borst said he and Robie sat down and decided that he should move to heavyweight (285 pounds) and it’s a move that has paid off for him.

“I’m enjoying it,” Borst said. “I like being a little bit of a smaller heavyweight because I’m a little quicker than the bigger guys and I’m about as strong as everybody there. So I’m not really scared of anybody or anything. I step up to the plate, every single time. I’m enjoying being a heavyweight. ...Ever since I was little I’ve never stopped growing so I figured well the last thing I could do was be a heavyweight. So I kind of knew that maybe one day it would happen.”

This season Borst was able to wrestle full-time as the Hokies’ starter and he went 9-5 in dual matches and 21-9 overall. Borst said it was a big season for him.

“Any season where you finally get your chance to kind of prove yourself a little bit, make the lineup is pretty big,” he said. “I’ve been looking for that opportunity for a while. So it was a good year for me to kind of finally break free and get to prove myself a little bit.”

Borst said that part of his recent success has come from being stronger mentally.

“Honestly probably the No. 1 thing I’ve improved is just my mental game,” Borst said. “I just started believing in myself a lot more and that’s what kind of carried me. I always had the physical, like I could always keep up with these guys. Jared (Haught) always talking to me ‘believe in yourself, believe in yourself’ kind of brought me to a different level. So that’s probably the biggest thing that’s changed for me.”

Borst said that coming to Virginia Tech has turned out to be a great decision.

“They’ve opened up so many doors for me,” he said. “I’ve met so many incredible people through Virginia Tech athletics and even on campus. Even like the Blacksburg and Christiansburg community, the New River Valley, is so different from everywhere else. I’ve been able to connect with many different people and it’s probably the best decision I’ve ever made in my life hands down.”

Borst said that now he just wants to keep getting better and stronger and try to win a national title.

Borst’s three state titles started a trend at Sherando. The Warriors have had wrestlers win state titles in five of the last seven years, including freshman Keagan Judd this past season.

“(Sherando head wrestling coach Brian) Kibler’s done such a phenomenal job,” Borst said. “Him and (Sherando assistant wrestling coach Jim) Straight have taken over that team. They’ve done great things and I know Judd won — the first freshman to win a state title, which is a new record at Sherando. So I think it’s so cool that guys continue to build the program there. I really hope that he becomes the first four-time state champ. I’m excited for those guys and I think they’ve got a great thing going. I’m very grateful to have gone through that program.”