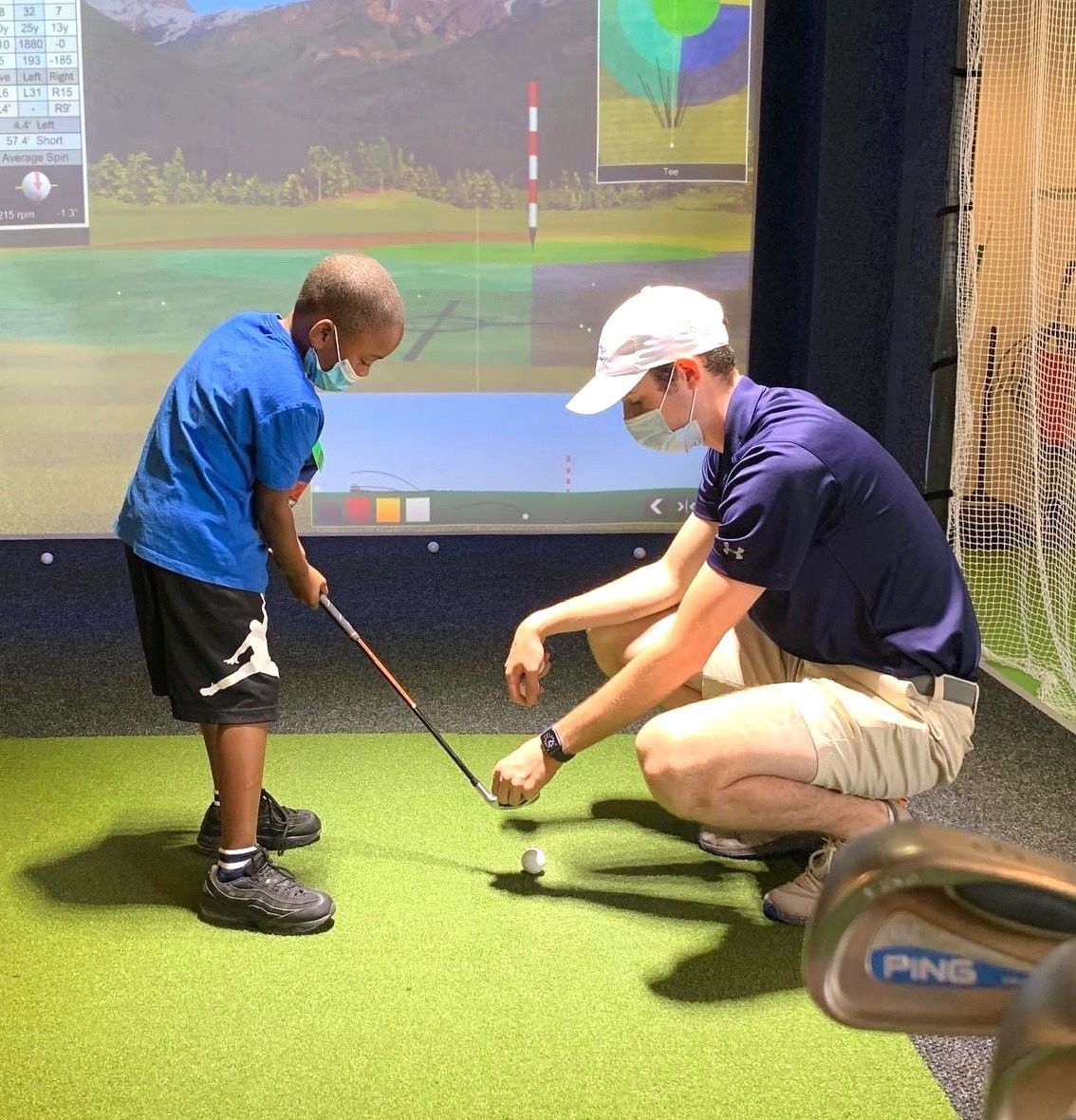 Mason Scott, a 2016 Sherando High School graduate, helps a student with the indoor golf simulator at Burroughs-Molette Elementary School in Brunswick, Georgia. Scott is an intern and program coordinator with First Tee, a national youth development organization for golf. 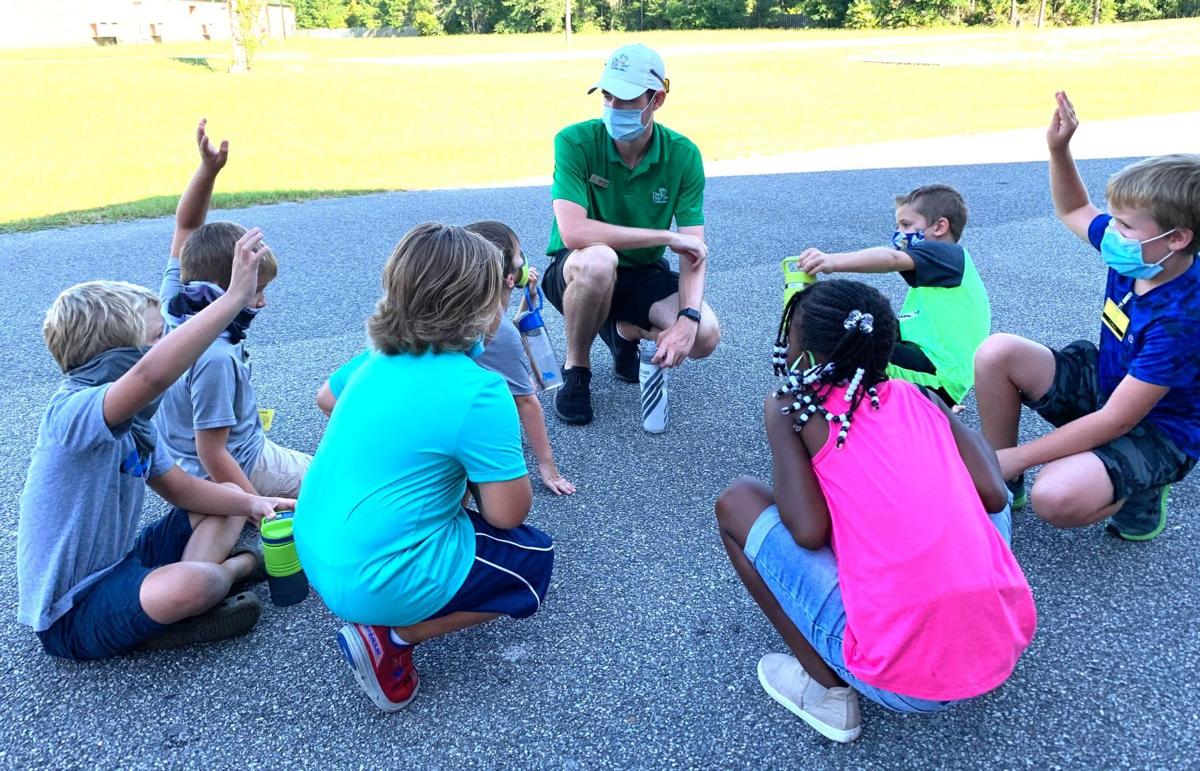 Mason Scott talks to members of a local Boys and Girls Club in Brunswick, Georgia. Teaching students proper values is the main goal of First Tee, where Scott is a program coordinator.

Mason Scott, a 2016 Sherando High School graduate, helps a student with the indoor golf simulator at Burroughs-Molette Elementary School in Brunswick, Georgia. Scott is an intern and program coordinator with First Tee, a national youth development organization for golf.

Mason Scott talks to members of a local Boys and Girls Club in Brunswick, Georgia. Teaching students proper values is the main goal of First Tee, where Scott is a program coordinator.

Mason Scott’s not sure exactly what role he’ll have in the golf industry in a couple of years, but he’s enjoying the present just fine.

A former standout golfer for Sherando High School who graduated in 2016, Scott is currently an intern and program director with First Tee, a youth development organization for golf. The organization has chapters in all 50 states and has six international chapters and features PGA Tour commissioner Jay Monahan as its chair and former PGA commissioner Tim Finchem as its vice chair.

First Tee provides opportunities for children age 5-18 to become interested in golf, but Scott said teaching them values that can enhance their daily lives is the main objective of the organization.

Scott works at The First Tee of the Golden Isles in Brunswick, Ga, where 21-time PGA Tour winner Davis Love III is an ambassador for the chapter. Scott’s worked with children at golf courses, but also at elementary schools and the local Boys & Girls Club.

“Our main goal is delivering those life skills and the core values, and golf is the way we do it, “ said Scott in a phone interview. “A lot of these kids maybe have never played golf before, and this is just a way for them to get started.”

Scott began volunteering with First Tee at its chapter in Pinehurst, N.C., in the fall of 2018 as a student at Methodist University in Fayetteville, N.C. A marketing major with a professional golf management concentration, Scott had an internship in Pinehurst in the summer of 2019.

After finishing up his classwork last fall, Scott started his internship with the Golden Isles in January (it’s his only remaining graduation requirement — Scott will get his degree in December). Once he completes his internship on Aug. 15, Scott might remain at Golden Isles as a full-time program coordinator.

Scott is part of a three-person team that works with children ages 5-8. The team instructs classes of kids that typically number from six to nine youngsters. Scott’s team meets with them once a week for four weeks. During the spring and fall — when Scott spends a lot of time at nearby courses Jekyll Island and Sea Island and gets help from local club pros — he’ll teach four or five classes per week, and in the summer it’s two or three per week. Classes typically last 90 minutes.

First Tee provides equipment and balls for children to use. Children have the opportunity to learn more advanced skills as they spend more time with First Tee.

No matter if they’re on a golf course, a gym, or a field, Scott and his team are a lot more concerned with developing character in their students as opposed to an efficient backswing. First Tee’s nine core values are honesty, integrity, sportsmanship, respect, confidence, responsibility, perseverance, courtesy, and judgment.

“We have a quick conversation about the values, and then an implementation of those values into the games,” Scott said.

Scott said his team used a putting game to reinforce the importance of honesty. They had the children keep their own score.

“Sometimes we’ll throw in some penalty zones into the course if they’re playing on the putting course,” Scott said. “If their ball hits a cone that’s marked as a penalty zone, are they being honest in taking those penalties by themselves? It’s really kind of putting the accountability on them.

“We’re watching them play, but not really helping them with the score so they’re accountable for themselves.”

Scott gets to be creative with designing programs in person, and he got to do so online with First Tee because of the COVID-19 pandemic. From March through May he was shuttered in at his Georgia residence, but he helped design more than a dozen “Golf at Home” segments that involved core value lessons and games and were posted for participants in the First Tee program.

One of them was a trick shot segment in which he chipped a ping pong ball down the stairs and into a cup, which can be found at www.youtube.com/watch?v=toMron9E-mM&amp;feature=youtu.be.

The segment was used by ABC5 in Boston — Scott said a friend of his father’s who works at the station saw it on social media and shared it with the station’s sports department.

“The PGA Tour was wanting people to post trick shots,” Scott said. “I just set it up with items I had at my house.”

Scott also had to make changes after the pandemic as well, making sure to wipe down equipment and having everyone use face coverings. But he used the changes as a teaching moment for the children, telling them they need to respect each other’s space in an era of social distancing.

Scott said he’d like to work with First Tee well into 2021 because it’s been an enjoyable and worthwhile experience.

“Being down here, it’s such a golf-rich environment,” Scott said. “I want to keep building those connections and relationships with the people down here. It’s great working with a lot of PGA club professionals in the area, getting to know them, getting to know the industry a little bit better.

“I’d like to keep this up over the next year and see where that leads me. Whether that’s a path of more youth-centered things or something involved with teaching and instruction, I’ll see where that goes and roll with it.”