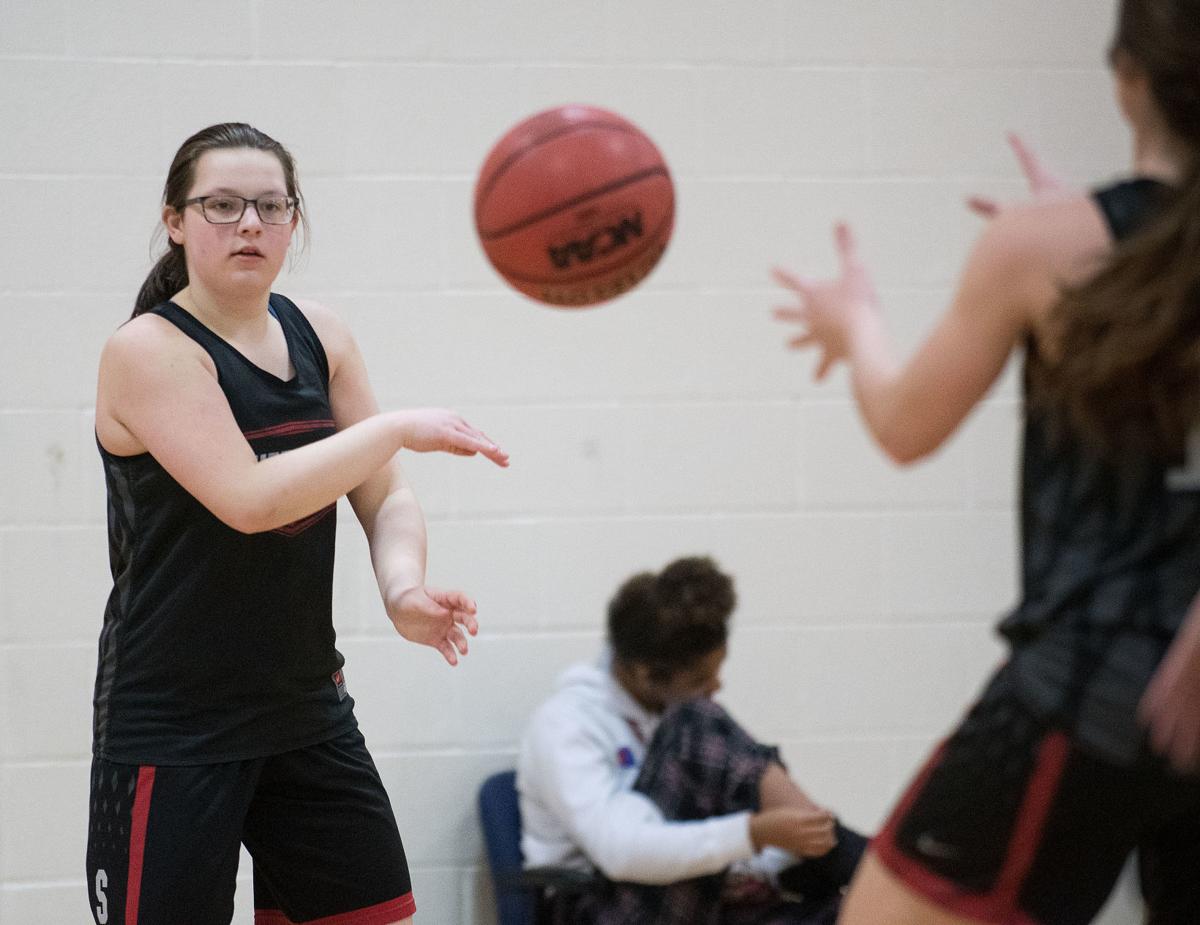 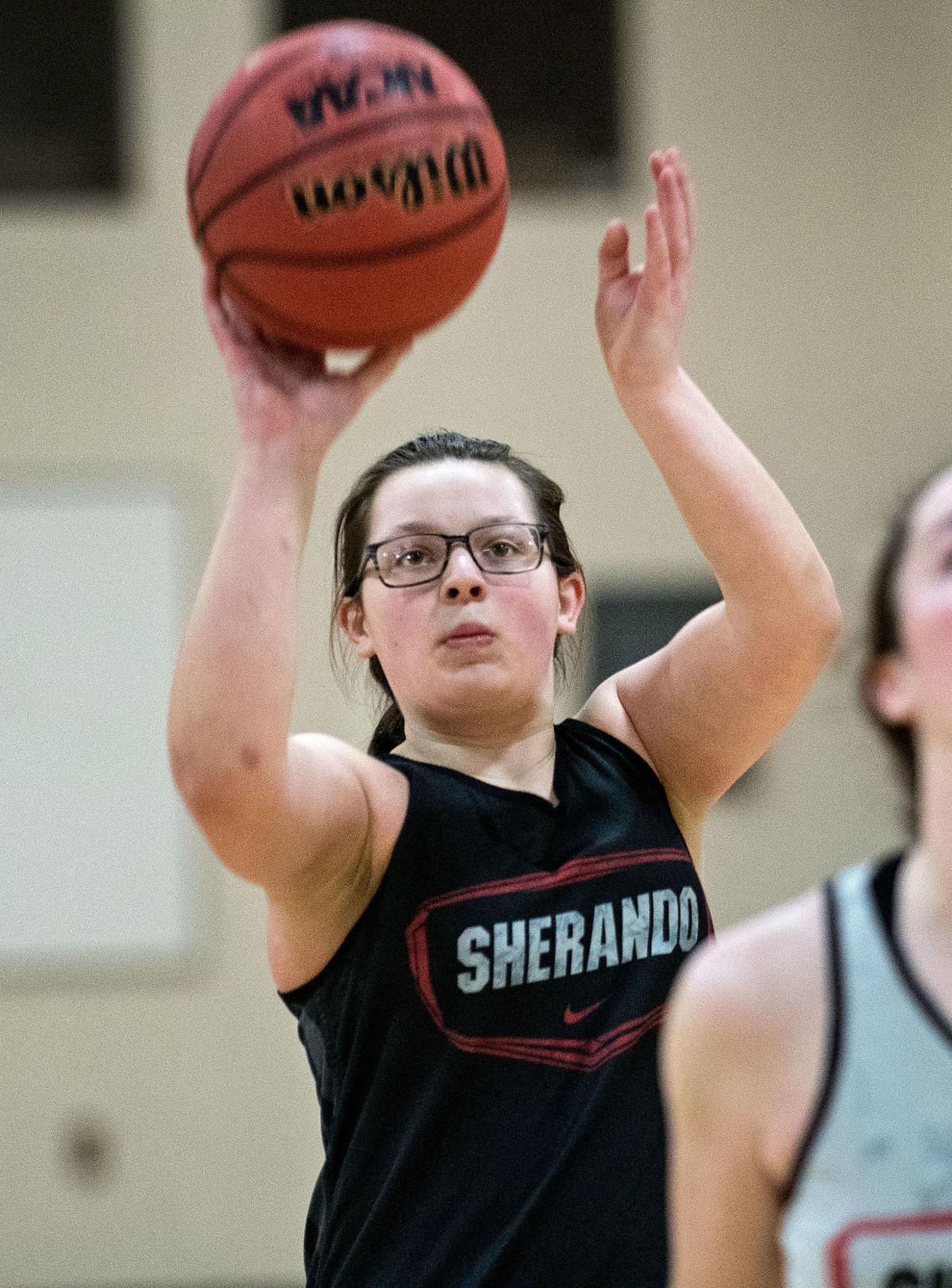 STEPHENS CITY — Grace Burke was a little worried going into the season about how her freshman season would go — but so far things couldn’t have gone much better.

The Sherando guard has made a huge impact with the team and has fit in perfectly.

“I was worried coming in like ‘oh will they like me? Will I fit in with them?’” Burke said. “Because I’m so much younger than them. But now I feel we’ve really clicked and connected and our chemistry and team bonding on and off the court has grown a lot. I feel a lot more comfortable now than I was in the beginning.”

Burke leads the team in scoring this season and has been a welcome addition to an already young squad.

Sherando first-year coach Brooklyn Wilson said that Burke has fit in nicely with the rest of the team.

“She came to a ton of our summer stuff and so she made a good bond with the girls early on and just kind of fit right in once she got here,” Wilson said. “They all did stuff in the summer. She went to camp with a lot of the upper-classmen so they got to bond that way. She’s become really close with some of the seniors and juniors and that helped as well.”

Burke said she fell in love with the game due to her older brother, Hunter, and her father, Richard, playing the game.

“I always watched my older brother play and I just always copied what he did and fell in love with the game because of him and my dad,” she said.

Grace Burke said her dad has had a big influence on her game, even if it’s just watching it on television.

“Me and my dad will be watching (college basketball) and he’ll stop it and pause it and be like, ‘oh so look at this,’” Grace Burke said. “So it’s kind of like film session, if you will.”

Grace Burke said that she loves to learn more about the game and just keep improving and it’s one of the main reasons she loves the game.

“I like the competitiveness about it,” Grace Burke said. “I like being able to play with teammates and working together. You can always continue to work and continue to get better.”

Grace Burke said that one thing that’s helped her game has been playing Amateur Athletic Union basketball for the Winchester Elite. She said she has played for the Elite for three years and playing travel basketball helped her get used to playing at a fast pace and be prepared for this season.

Early in the season, Grace Burke had to play more point guard than shooting guard due to injuries and Wilson said she handled it well.

Shooting is what Grace Burke is quickly becoming known for at Sherando, especially shooting 3-pointers.

Grace Burke said that shooting has always come naturally for her and a lot of it is because of the amount of time she spends shooting around outside her house either by herself or with her dad and brother. She said her dad and brother have given her a lot of advice, which always helps her if she’s struggling.

“Whenever I’m shooting, if I have an off day, I’ll think ‘OK keep your elbow in,’” Grace Burke said. “I just think of those little things and it helps.”

In a game against Moorefield on Dec. 30, Burke was struggling with her shot. She missed her first six shots, all in the first half. However, she made her first 3-point attempt in the second half and scored 12 points in a span of eight minutes. Her offensive surge was part of a 20-10 run that helped the Warriors rally for a victory. She made 4-of-5 3-pointers during the run.

“She has a quick release, which is one thing that a lot of younger kids struggle with once they get to the varsity level because they’re used to having some time to shoot it,” Wilson said. “Her confidence when she gets hot is great. She doesn’t hesitate when shooting. She doesn’t second guess herself and she bounces back quickly, too (when she misses shots).

While Grace Burke likes shooting, she said she doesn’t want to be known as just a shooter. She wants to be a good leader and always looks to help her teammates get better shots.

“I don’t want to be like ‘oh I’m the greatest shooter’ or whatever,” she said. “I just want to think of this play I got that good pass to my teammate for a bucket — that’s what I’m thinking. I’m not thinking ‘oh, I made this 3 this time.’ I’m thinking of ‘what can I do next to get my teammates open so they get an open shot?’”

Grace Burke said that while she is more of an offensive player at this point, she wants to keep improving her speed and agility so that she can get better on defense as well.

The Warriors are 6-7 this season with a young squad that has had to deal with quite a few injuries. Grace Burke is one of two freshmen on the team along with three sophomores. The team has only two seniors.

“I feel like we’re doing really well,” Grace Burke said. “We’ve had ups and downs but all in all, any games we lose, we bounce back. We see what we did wrong and we continue to fix not only the big things, but the little things that will help us in the future games to where we’ll be more successful.”

Grace Burke said that she hopes the lengthy amount of time she puts in with basketball pays off in the long run. She said her long-term goal is to get a scholarship and play in college and maybe even professionally some day.

“I just love the game and I couldn’t see myself doing anything but basketball,” she said. “They always say ‘what’s your Plan B?’ But I don’t have a Plan B. My only plan is to play basketball — and that’s all I want to do.”