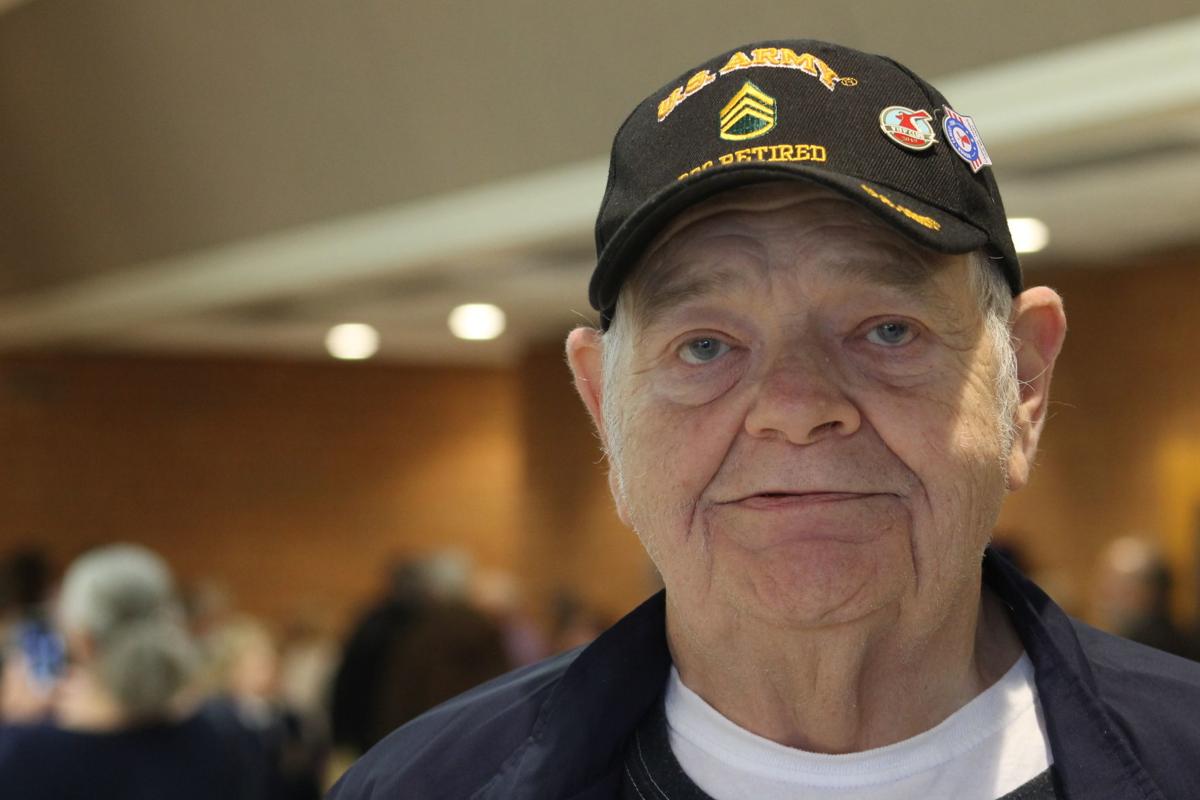 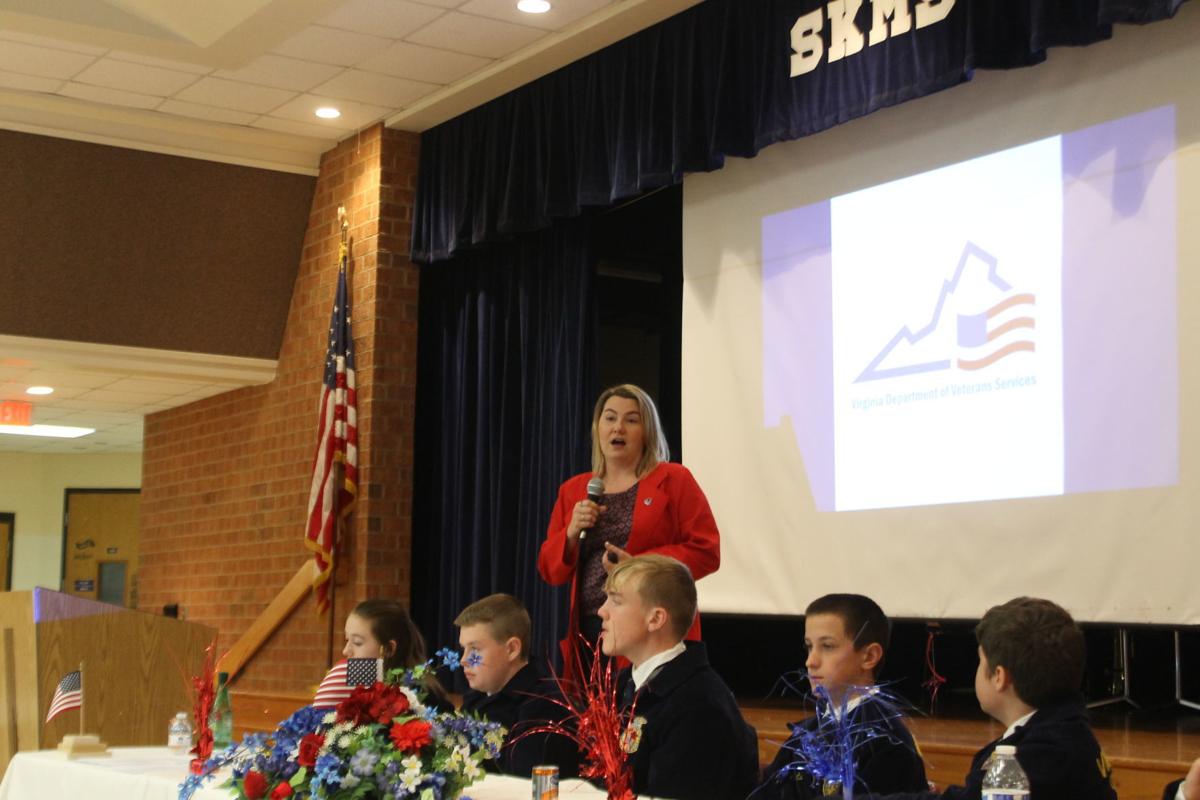 Meagan LoBuglio, southwest regional planning manager for the Virginia Department of Veterans Services, speaks to a crowd of veterans and their families at the annual Veterans Day Breakfast on Saturday at Signal Knob Middle School. 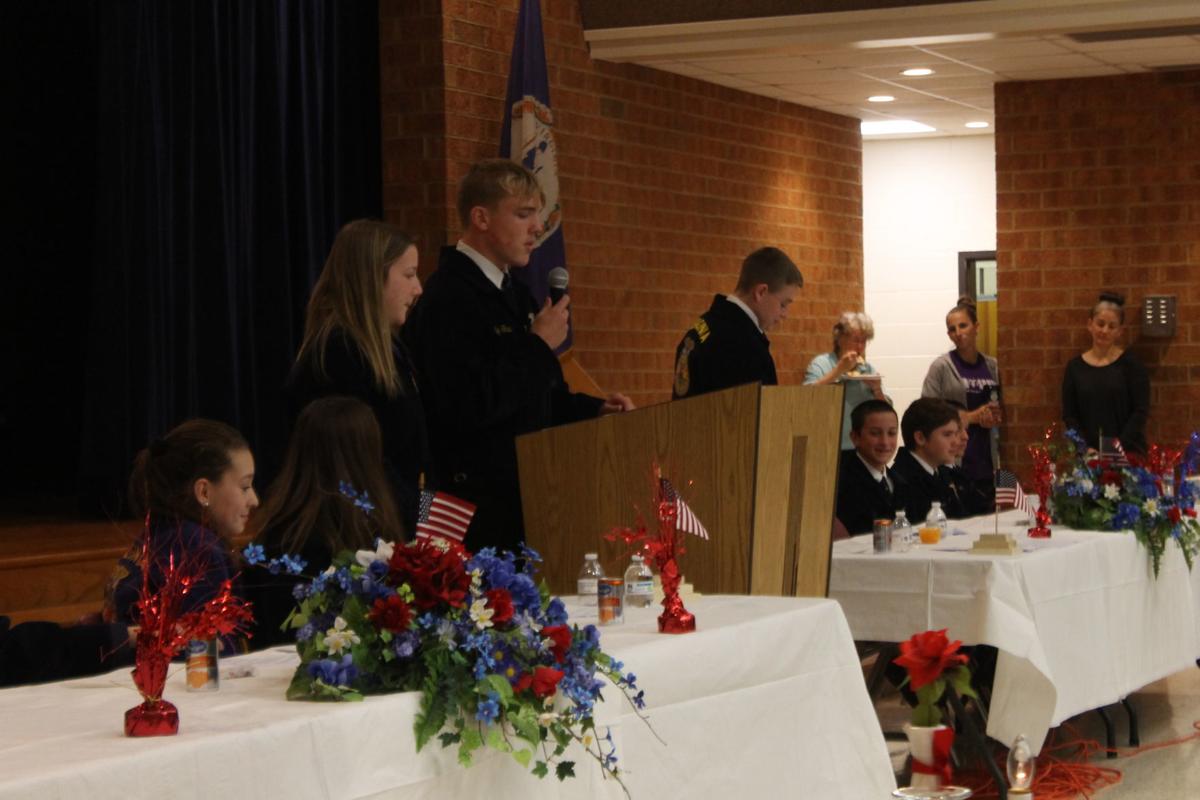 Meagan LoBuglio, southwest regional planning manager for the Virginia Department of Veterans Services, speaks to a crowd of veterans and their families at the annual Veterans Day Breakfast on Saturday at Signal Knob Middle School.

Dozens of U.S. military veterans spanning generations sat with their families and friends in the school cafeteria for breakfast where they heard students talk about the meaning behind the holiday and what it feels like to be an American. Meagan LoBuglio, U.S. Air Force veteran and southwest regional program manager for the Virginia Department of Veterans Services, gave a presentation about what her agency provides for former military members.

Veterans thanked the students and staff for putting on the event. Chuck Breiner served in the U.S. Army for 21 years. He joined in 1968 and saw combat in the Vietnam War.

“Well, I’d been there for 21 years and this is my country and I believe in making sure that my family and everybody in America is free,” Briener said after the event. “This is awesome.

“In Vietnam, when we all came home, they didn’t treat us very well,” Briener said. “This is kind of retribution. To me it is anyway. Now they’re supporting everybody.”

“To be a veteran is to make myself and others proud of our country,” “I served in a time when veterans weren’t very much appreciated, which made a band of brothers and sisters very, very strong, to support each other.

“Gradually, the times have changed and programs like this with the young people putting them on for the veterans, honoring the veterans and being sincere about it is very heartwarming because most of us never got a welcome,” “This is a welcome home.”

After the event, FFA student Colby Shaw said the event serves as a way to honor veterans and the sacrifices they’ve made for the country. Shaw said his father is a veteran of the U.S. Army while a great uncle died in the Vietnam War.

“Well, I feel like we just do this to help out our veterans because they’ve done so much for us and it’s just kind of like repaying them, even though they’ve done way more for us than just a small breakfast,” Mauck said.

Agriscience teacher and FFA adviser Jaclyn Ryan said after the event that the school has held the program for at least 20 years.

“It means a lot to me personally,” Ryan said. “I’ve had family members who of course have served in the military but I feel like you understand better and have an appreciation for it growing up.

“But an event like this takes it to a whole new level,” Ryan went on to say. “So you’re able to actually share that appreciation you have with other people in the community and not just family.”

“For our students, a lot of them don’t have a chance to say 'thank you' and some of them don’t understand the meaning behind Veterans Day so we actually go over that in class,” Ryan said. “We actually show some really patriotic, some meaningful videos in class to try to get that thought process going of what does it mean to you to be an American and hopefully to develop an understanding of if we did not thank our veterans, if we did not have our veterans, we would not have the rights and freedoms that we have here in America.”