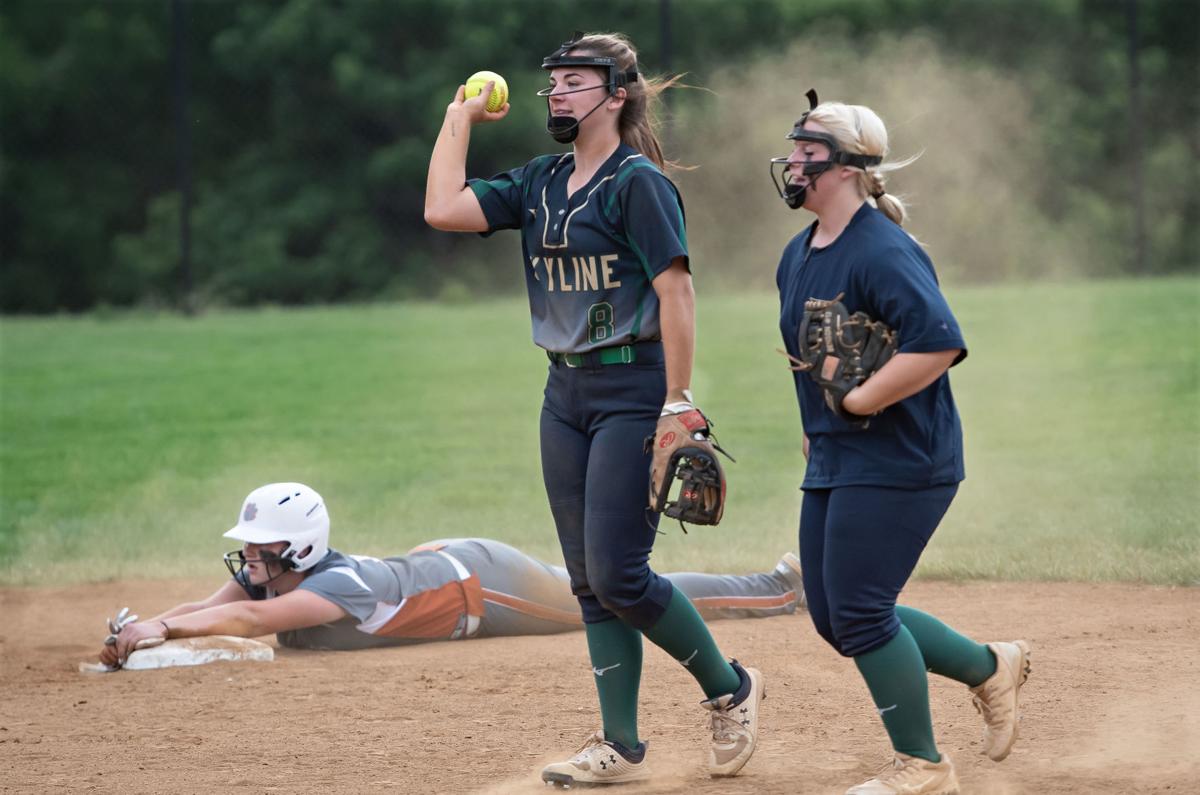 Skyline’s shortstop Lexi Clatterbuck, left, and second baseman Grace Benson, right, walk back after Clatterbuck tagged out Brentsville’s Ellie Post on a steal attempt during the sixth inning during last week's Region 3B final. The Hawks play at New Kent today in the Class 3 state semifinals. 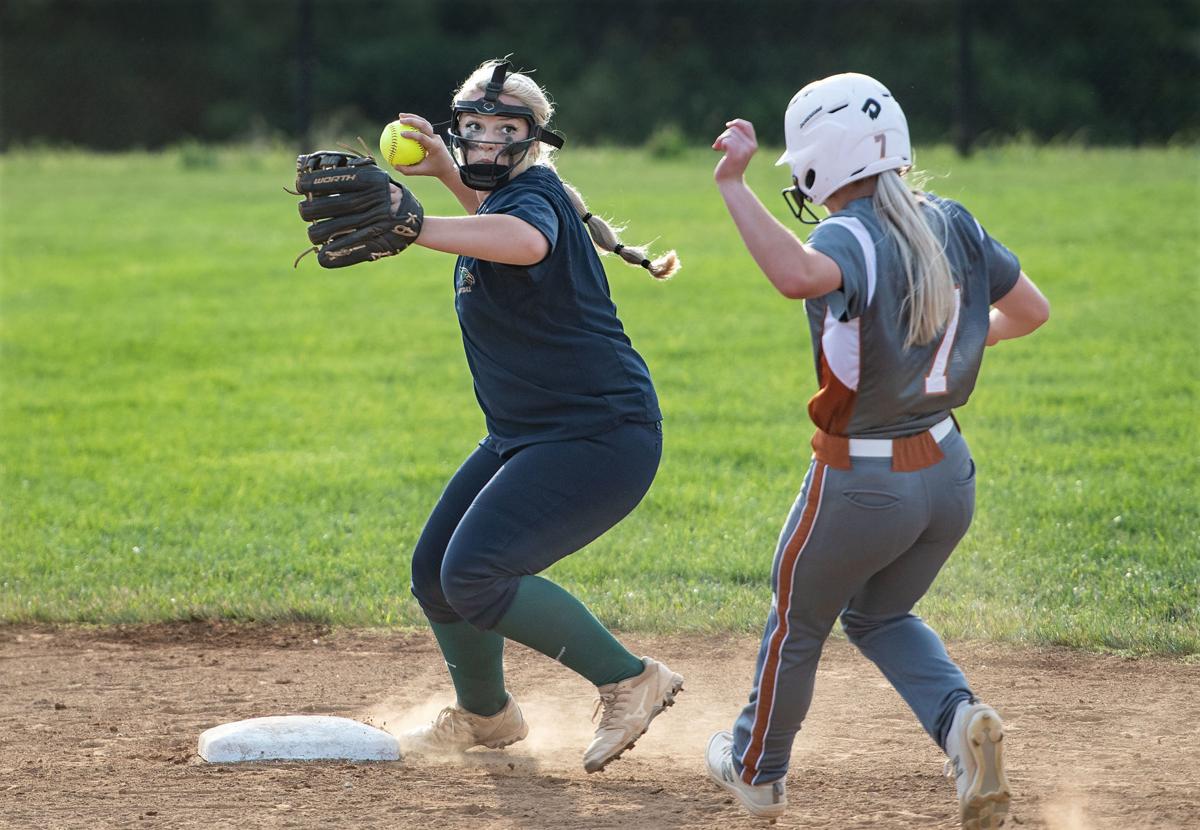 Skyline’s Grace Benson turns a double play forcing Brentsville’s Emily Will out during the fourth inning of the Hawks win over Brentsville last week.

Skyline’s shortstop Lexi Clatterbuck, left, and second baseman Grace Benson, right, walk back after Clatterbuck tagged out Brentsville’s Ellie Post on a steal attempt during the sixth inning during last week's Region 3B final. The Hawks play at New Kent today in the Class 3 state semifinals.

Skyline’s Grace Benson turns a double play forcing Brentsville’s Emily Will out during the fourth inning of the Hawks win over Brentsville last week.

The Hawks are in the Class 3 state semifinals for the third straight season. They are also playing a somewhat familiar opponent when they hit the road to take on New Kent for a 3 p.m. game today.

Two years ago, the Hawks went on the road and beat New Kent in the state quarterfinals, 4-2.

"I'm expecting them to be very good," Skyline senior Lexi Clatterbuck said. "We played them my sophomore year in the first game of states and it was a very close game. I can't remember how well they pitched, but I know they had a lot of hitters. I can only expect them to be better than they were. It will be a good game. I'm really excited for it."

Clatterbuck said it gives the team confidence knowing they beat New Kent on the road once before, but they still have to stay focused.

"We'll have to prepare," Clatterbuck said. "We're not going to take them lightly. We know it's the state semifinal game. They're going to be good."

Skyline coach John Ritter said having five players who have played against New Kent on the road will help his younger players more than anything else.

"I think with the five that's been there before, it's a lot easier mindset for the younger girls and the other couple girls that it's their first time," Ritter said. "You got seven that haven't been there and (last) Friday (in the Region 3B final) they seemed to hold up well on that part of it. So I think with that leadership and being there before is a great thing."

New Kent (14-1) has the same pitcher from two years ago in senior Gracie Ellis. In the Region 3A final, Ellis struck out 11 and walked only one, allowing just five hits, in a 3-2 win over Tabb.

Ritter said Ellis, who will be playing at Randolph-Macon College next season, has improved and they expect her to be difficult to hit against.

"That's two years ago (that we played her)," Ritter said. "She's matured. She has gotten better because they're where they're at because of that. So you got to kind of hope that you can get her in a situation to where she's got to make a pitch in your favor."

The Hawks (14-1) have been strong offensively this season. They are hitting .333 as a team and have seven players hitting at least .313.

Ritter said a big key is that they have such a strong lineup from top to bottom.

"It's a tough lineup and if we can hit, we'll be good," he said. "To me being here for six years, it's probably my best lineup. It's the most solid lineup. And as a coach, you feel good about that because you know at any time that somebody can break out. And as soon as one breaks out it, just follows suit with the rest of them and that's a good thing."

Another key to the Hawks' success this season has been their ability to come from behind.

Skyline rallied from early deficits in all three regional games. In the Region 3B final against Brentsville, the Hawks rallied from 3-0 down.

"We never lose any confidence," Clatterbuck said. "And if we get down by a few runs, we don't panic. You won't see us out there pouting. I think our energy won us that last game. We were really cheering in the dugout. I think that got into Brentsville's head a little bit because we were down 3-0. And we kept our energy up and we were screaming in the dugout, and that's what got us that game."

Skyline sophomore pitcher Peyton Kaufman has also been a key factor for the Hawks as well. In her first season pitching, Kaufman is 11-1 with a 3.34 ERA and 97 strikeouts in 97 innings.

"I was a little nervous at first, but then after the first couple games I was like 'OK' and then I just calmed down," Kaufman said of her season.

The Trojans have a solid offense, but Kaufman said she's excited to face them.

"I like that challenge," Kaufman said. "I feel like it makes it more interesting. ...I've heard their pitcher's pretty good. But I think we hit faster pitching, so I think we're going to be OK. We play solid defense, so I think whatever they throw at us we'll be able to handle it."

The Hawks have been to the semifinals before, but now they are looking to take it to the next step. If they defeat New Kent they will host the Class 3 state championship game on Saturday.

"It was my dream," Clatterbuck said of making it back to the state semifinals. "Losing in the state semifinal game my sophomore year and freshman year, the goal was to come back. And we've had a really good season no matter what happens. But the goal is to go all the way from here, and I think we can do it."

For seniors Clatterbuck, Tiara Ford and Kendall Morris, it's their last week of their high school careers and they want to end it in a positive way.

"You want to go out with a bang for sure," Clatterbuck said. "But it was exciting my freshman year, and it's just as exciting this year. But it would mean a lot more to go out with that bang because it's going to be sad when the season's over – might as well end it on a good note."