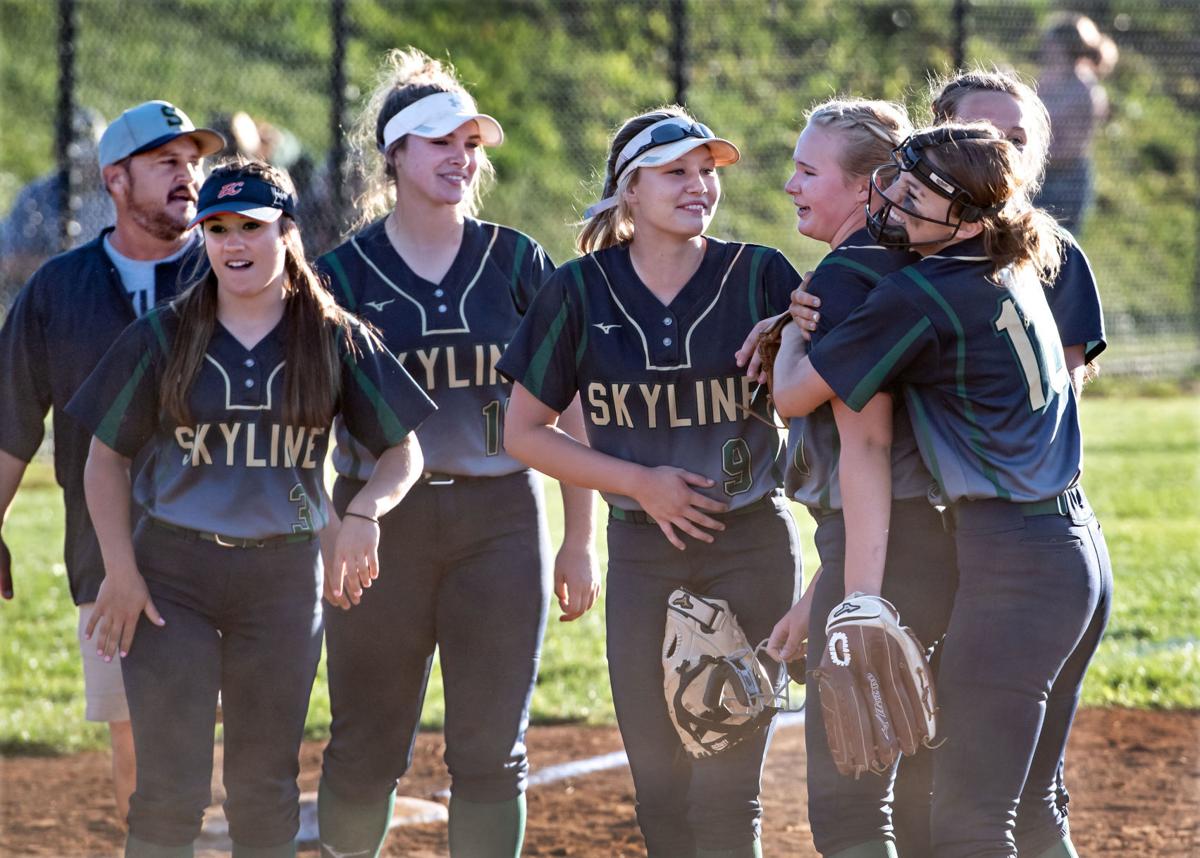 Skyline’s softball team celebrates after their 4-3 win over Warren County on Wednesday evening in the Region 3B softball semi-finals. 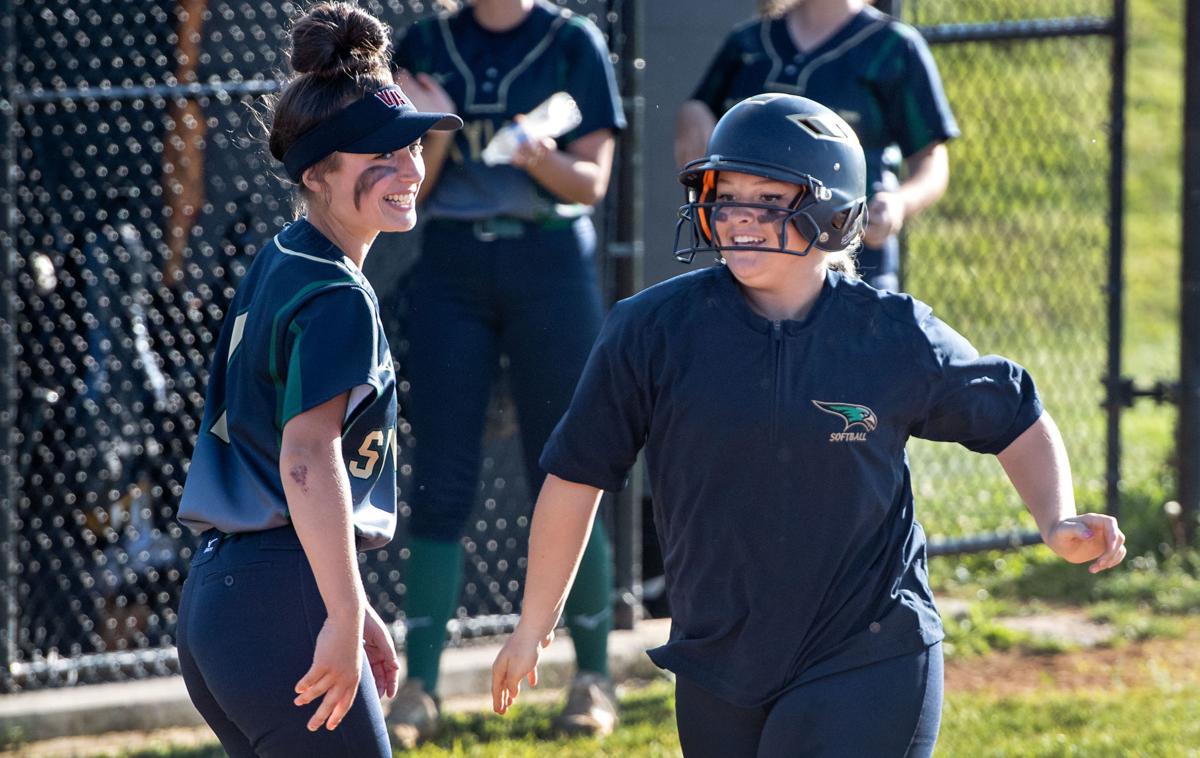 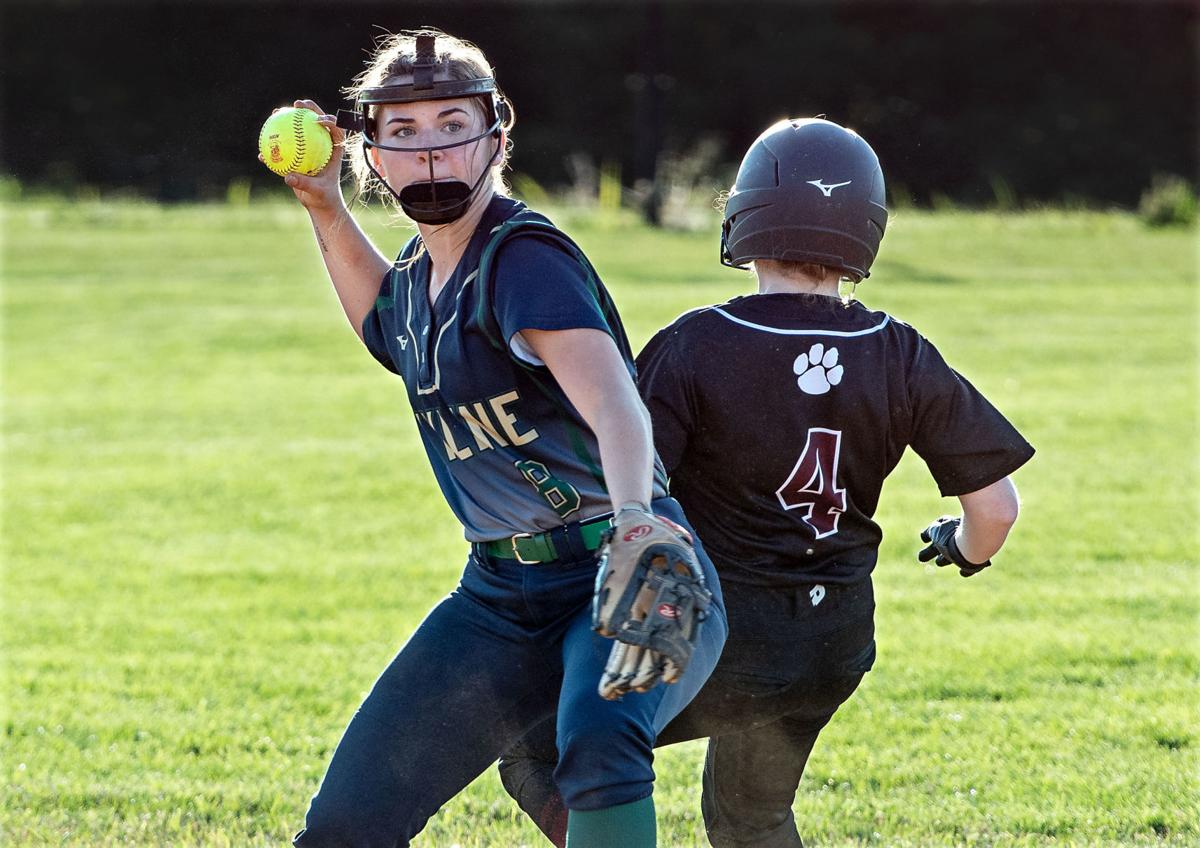 Skyline’s shortstop Lexi Clatterbuck turns a double play as Warren’s Alexis Pitsenbarger is forced out at second base during the sixth inning. 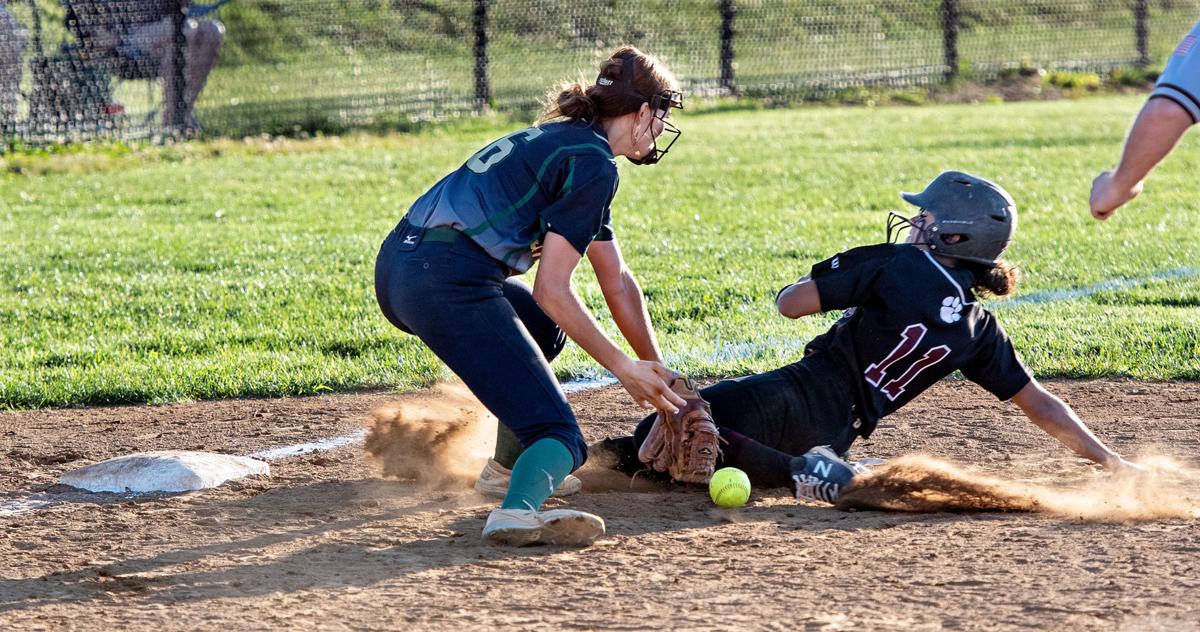 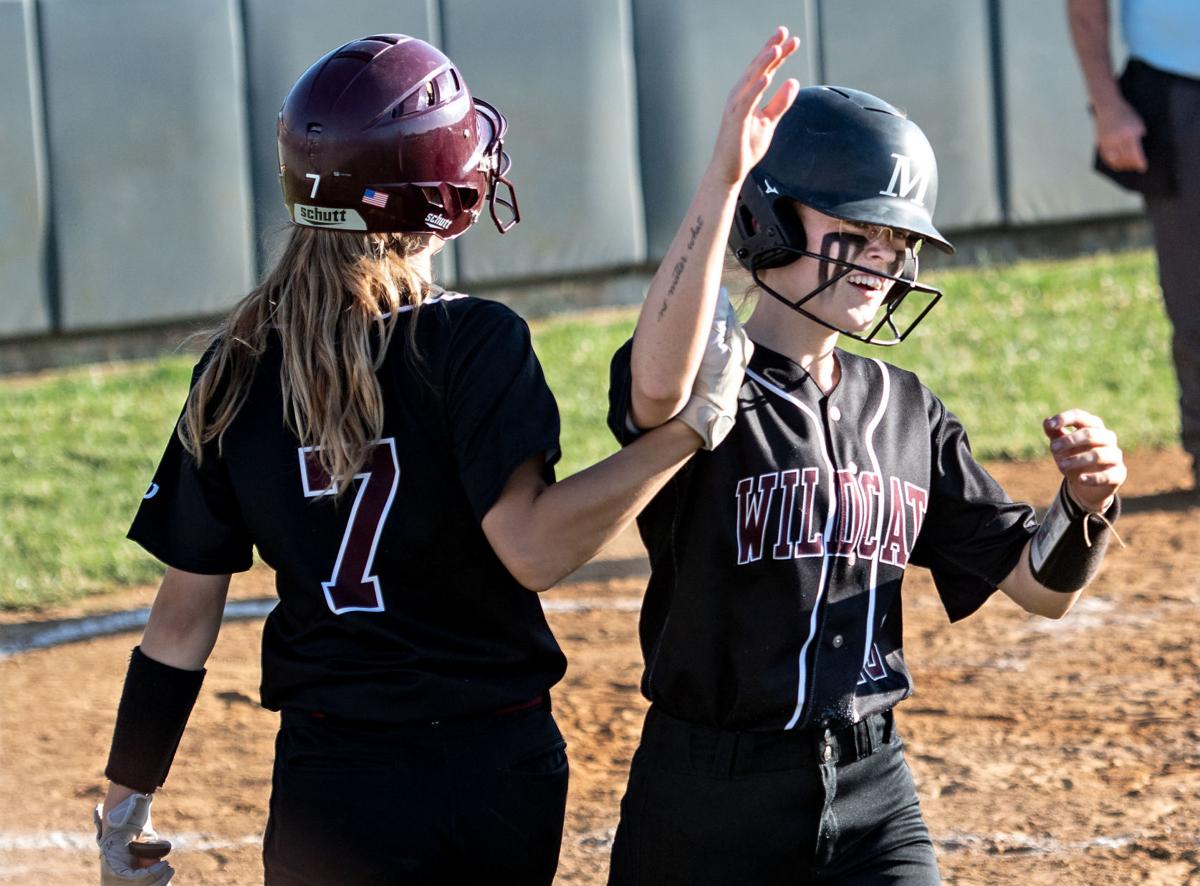 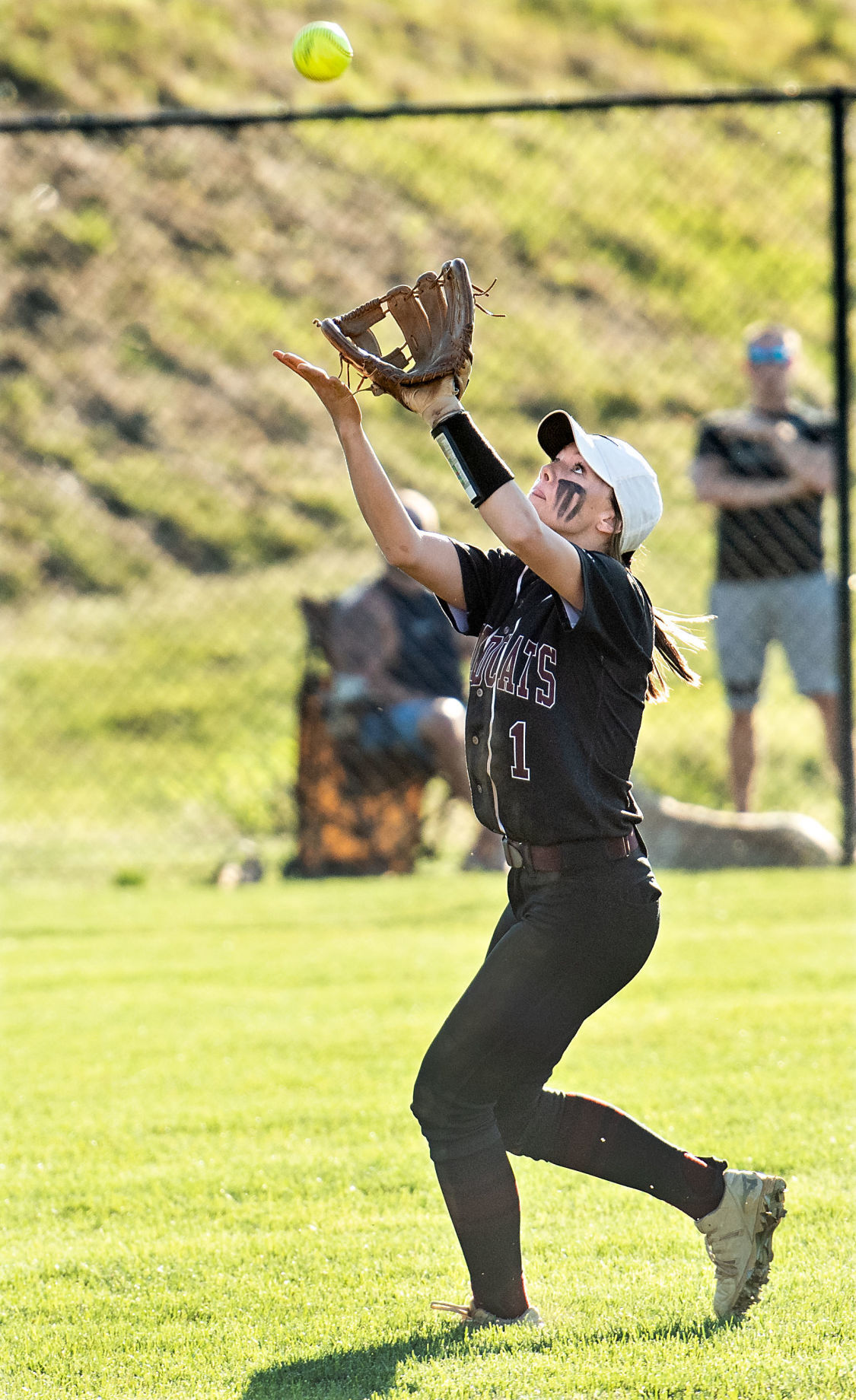 Warren’s shortstop Karleigh Crabill gets under a fly ball.

Skyline’s softball team celebrates after their 4-3 win over Warren County on Wednesday evening in the Region 3B softball semi-finals.

Skyline’s shortstop Lexi Clatterbuck turns a double play as Warren’s Alexis Pitsenbarger is forced out at second base during the sixth inning.

Warren’s shortstop Karleigh Crabill gets under a fly ball.

FRONT ROYAL — With the season on the line, Skyline's softball team rose to the occasion on Wednesday night.

The top-seeded Hawks rallied from a one-run deficit in the fifth inning to beat cross-town rival and fourth-seeded Warren County 4-3 in the Region 3B semifinals. Skyline will host second-seeded Brentsville in the regional championship game Friday at 6 p.m.

"It was a really close game, but all-in-all we did really well," Skyline senior Lexi Clatterbuck said. "We made some good defensive plays. We had big hits. That's what won us that game — we had big hits. It's so exciting, especially against our cross-town rival. It's the third time we've beat them, and they're a good team."

Skyline (13-1) took a 1-0 lead in the bottom of the third on a solo homer by junior Grace Benson off Warren County starting pitcher Olivia Kelly.

"It was a pretty pitch and it was my pitch," Benson said of her first homer of the season. "And it just felt good to hit it over and kind of get the first (run)."

The Wildcats (9-5) took a 2-1 lead in the top of the fifth. Warren County junior Atori Lane reached on an infield single and senior Hailey Stiltner drew a one-out walk from Skyline pitcher Peyton Kaufman.

With two outs, a two-run single by Jamie Kelly gave the Wildcats a 2-1 edge.

Skyline came right back in the bottom half of the inning. Skyline junior Astoria Free led off with a single off Olivia Kelly.

Warren County coach Ted McDaniel decided to make a pitching change at that  point and brought in Jamie Kelly to finish the game.

"I was really pleased with Olivia Kelly," McDaniel said. "She hadn't pitched against them all year. She came out and gave us four good innings. Jamie came in and she was a little bit stiff to start with, but she did well too."

With one out, Benson singled and Clatterbuck followed with an RBI single to tie the game at 2-2.

"It was a little nerve-racking, because they switched pitchers," Clatterbuck said. "We had seen Olivia (Kelly) and then we had seen Jamie (Kelly) the past few (games). But you just got to trust that you put in the work and that's what gets you going and have confidence."

Benson was forced out at third on a grounder by junior Jillian Shannon. Skyline sophomore Olivia Lacombe then stepped to the plate and delivered an RBI single to give the Hawks a 3-2 edge.

"I had been struggling hitting myself," Lacombe said. "As a team we had been hitting well. But for me, personally, this hit tonight was so big, because I really feel like it brought the energy up. And just gave us that final push to finish through the game and keep the win going."

Shannon scored on a passed ball to give the Hawks a 4-2 lead.

Warren County didn't go down easily in the seventh. Lane tripled with one out and scored on a groundout by Stiltner. However, Kaufman induced a groundout by Karleigh Crabill to end the game.

Kaufman worked out of a bases-loaded, no out jam in the top of the fourth. She struck out two in the inning to keep the Hawks ahead. She finished the game with seven strikeouts and allowed just six hits.

The Wildcats season comes to an end, but McDaniel said he was happy with how his squad played this season.

"I'm really proud of this team," McDaniel said. "Nobody gave us much of a chance of finishing .500 to start with. And six of our 12 players are sophomores and two are freshmen. ...We're going to miss our two seniors. They're great people, great leaders."

Skyline has a young squad with six sophomores on the team. Lacombe said it's exciting to see how well the young team has performed.

"I'm so proud of how far this entire team has come with the young group we've had," Lacombe said. "With having almost half of our team be sophomores that had never played varsity before, and definitely didn't get to play JV last year because of COVID. Us coming out and putting in the work and coming out with so many wins just brings everybody's spirit up."

The Hawks will play Brentsville for the third time this season. The two teams split their regular season meetings.

"That will be a good matchup," Ritter said. "We beat them by 10. Then they beat us by 10. So let's hope it's a better game this time. I'm confident in my girls. All you got to do is play the way we've been hitting and it can work out for us."

There will be a lot on the line as the program tries to pick up its third state berth in a row. The Hawks have lost in the state semifinals the last two seasons.

"This is my senior year," Clatterbuck said. "I went to state semifinals my freshman and sophomore years and lost both times. So I'm really hoping to go back to the final this year. That's the ultimate goal."