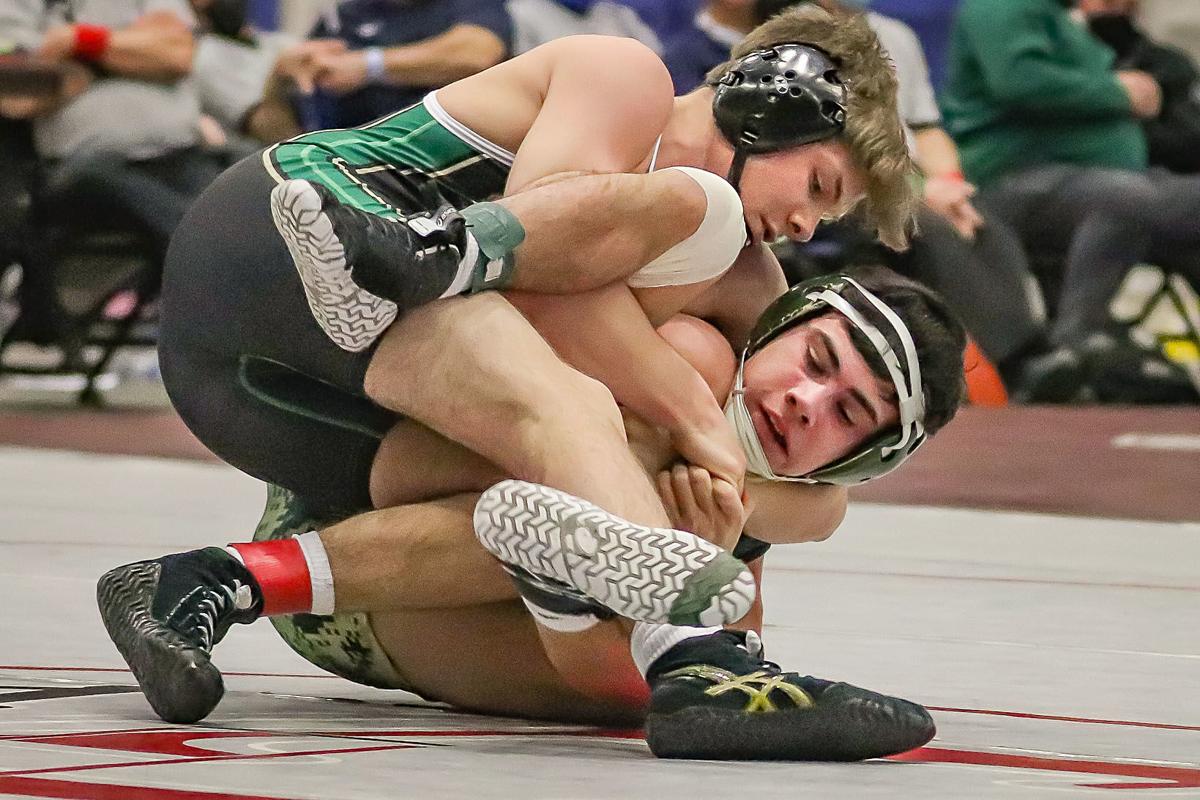 Tyer Davis locks a hold on Wilson Memorial’s Brian Habel in the 132-pound state title match during the Class 3 state wrestling tournament at the Salem Civic Center on Sunday. Davis pinned Habel in the second period. 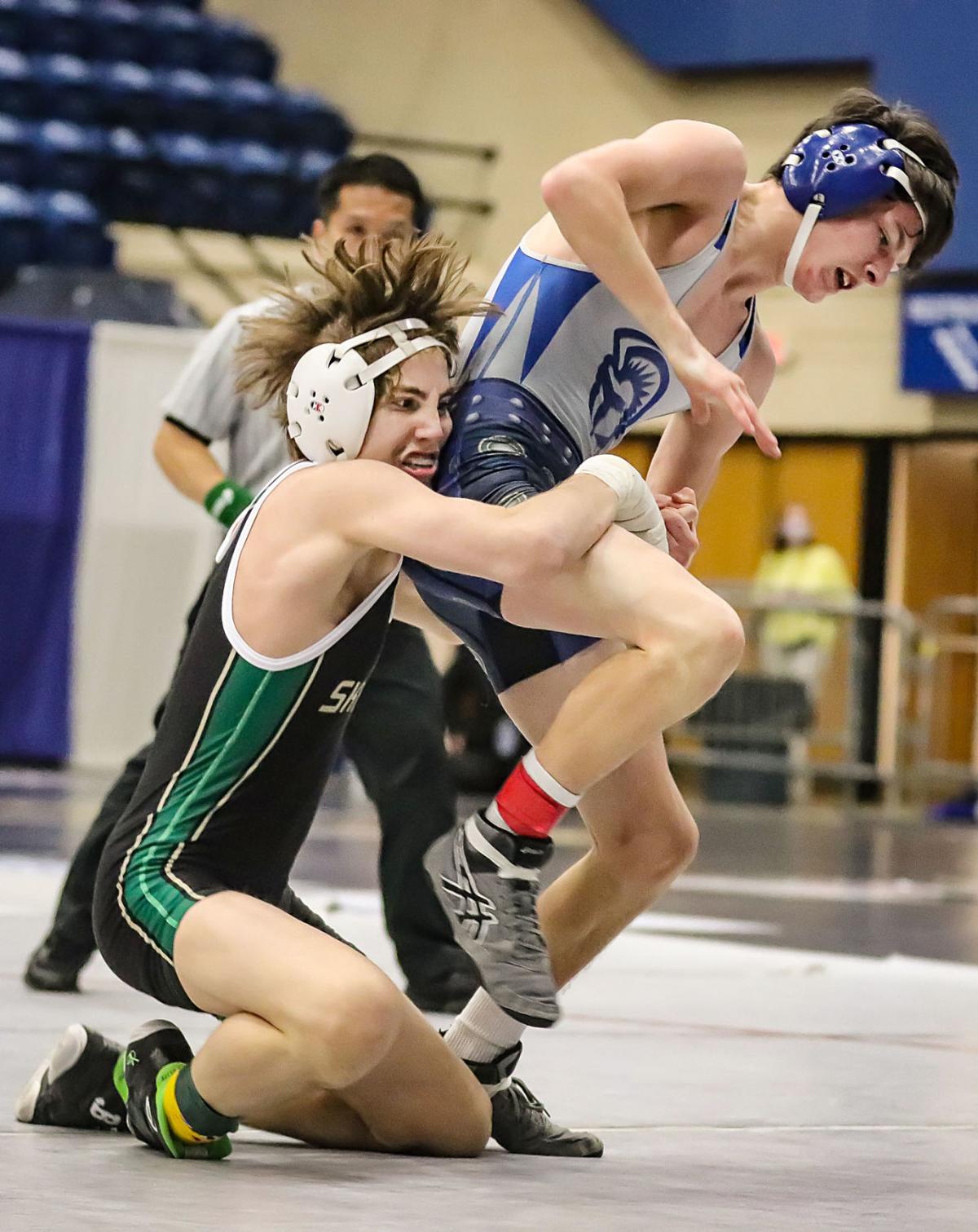 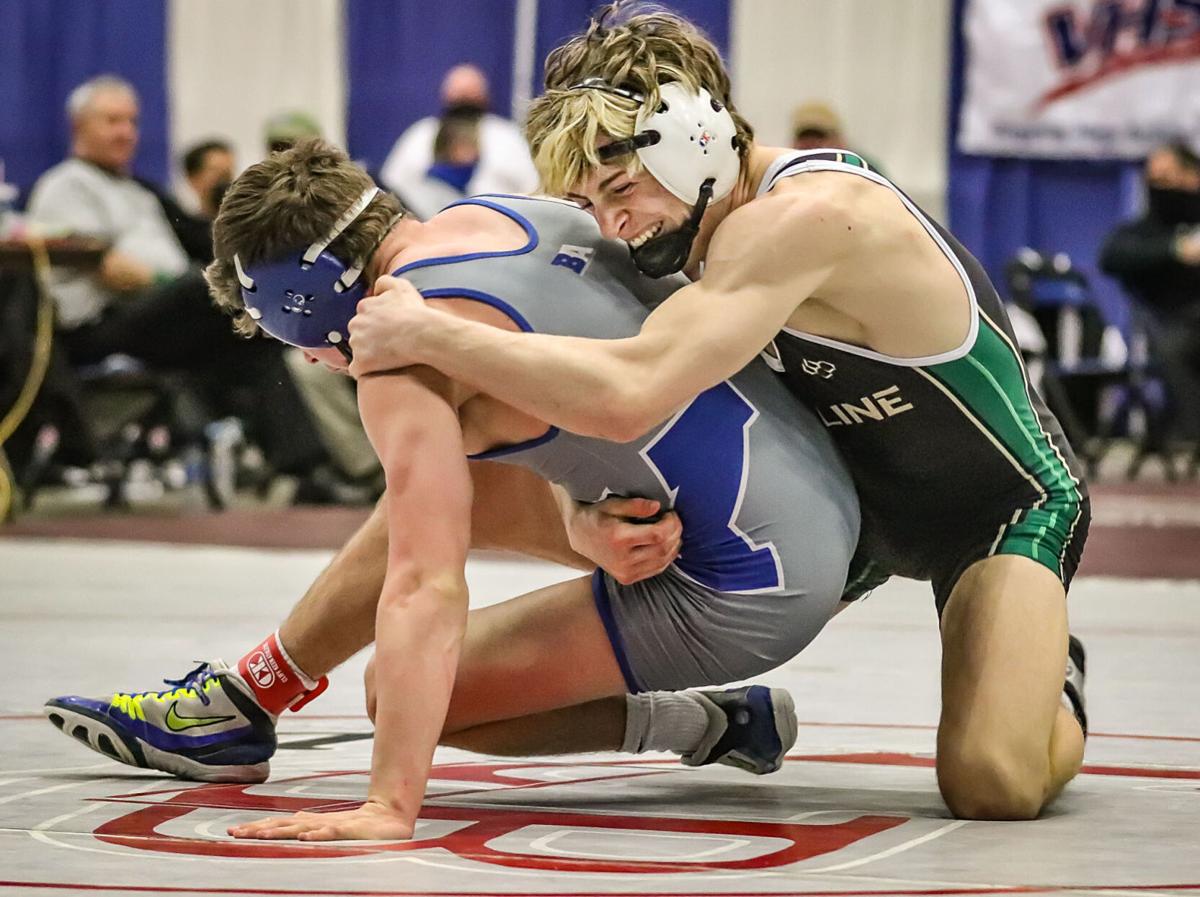 Tyer Davis locks a hold on Wilson Memorial’s Brian Habel in the 132-pound state title match during the Class 3 state wrestling tournament at the Salem Civic Center on Sunday. Davis pinned Habel in the second period.

SALEM – Skyline entered the Virginia High School League 2021 Class 3 state wrestling tournament having had two wrestlers win state titles in the first 13 years of the program’s history. By the time the Hawks left the Salem Civic Center on Sunday night, they’d more than doubled that total.

In addition to putting three wrestlers on top of the podium for the first time, the Hawks sent a program-best five wrestlers into the championship finals – junior Josh Domino and sophomore Phoenix Alyea suffered close losses in runner-up finishes at 113 and 120 pounds, respectively – and placed second as a team, the highest finish in program history.

Those achievements helped soften the blow of once again failing to unseat now-three-time defending state champ New Kent, which cruised to the team title on the strength of eight individual champions. The Trojans, who put 10 of their 12 wrestlers in the finals, scored 240.5 points to easily outpace the Hawks (166) and third-place Christiansburg (115).

“I thought we had a really good tournament. New Kent just had a better one,” said Symons, whose Skyline squad had beaten New Kent in a dual on Jan. 23. “… We had a goal in mind of wanting to be team champions and we looked at it from a realistic standpoint – and I think a lot of people did because we proved in a dual meet that we could beat them. But they showed up ready today. Not that we didn’t. We put three champs on the board.

“To finish second and have 10 placers, it means a lot. It’s a big step for where we’re at as a program.”

Asher, who won a Class 2 state title with Strasburg last season, became the first Skyline wrestler to win a state title since 2015 when he edged New Kent’s Daniel Colgin, 2-1, in the 106-pound championship bout on Sunday evening. Asher, who chose the bottom position to start the second period after a scoreless first frame, scored his only points of the match on a reversal after a lengthy struggle with Colgin midway through the second period.

Asher, who recently suffered a right hand injury and competed in Sunday’s final with the hand padded up and taped, gave up an escape late in the third period but warded off Colgin over the final 15 seconds of the bout.

“I was nervous because even though it’s my second time being the finals, it still gets you nervous, gets you excited,” said Asher, who finished his sophomore season 24-1 and avenged an earlier loss to Colgin.

“All I adjusted to was wrestling as hard as I can for those five minutes, doing stuff that I know I can do,” he added.

Following losses by Domino and Alyea, Davis put Skyline back in the win column with a second-period pin of Wilson Memorial’s Brian Habel for the 132-pound championship. It was a fitting conclusion for Davis (27-1 this season), who departs as Skyline’s career pins leader.

“We planned on coming in here and winning as a team, and it sucks that we didn’t perform as well as we had planned on, but individually we did good all throughout the lineup and of course me winning has been one of my goals since I first ever started wrestling as a kid,” Davis said. “It was big getting that win and getting it in the fashion that I did: a pin. I pinned all the kids from regions to today, which is big.”

Sunday marked the third time Davis had reached a championship finals match at the Class 3 state tournament. He settled for silver in 2018 and 2020.

“He’s the best wrestler to ever step through the doors of that program, so proud of him for not only his ability on the mat but his leadership ability,” Symons said of Davis. “I’ve said before, he’s a complete extension of our coaching staff in every aspect of what we do. … Really proud of him to be able to finish it off the way he did.”

Rudolph was in a similar position to Davis on Sunday, though without the previous runner-up finishes. A transfer from Sherando, Rudolph qualified for the Class 4 state tournament in each of his first three years with the Warriors but never placed higher than fifth.

At Skyline, Rudolph went a perfect 28-0 and capped his career with an 11-2 win over York’s Bradyn Waddell in the 145-pound title match on Sunday. The championship finals ended up being the easiest win of the night for Rudolph, who beat New Kent’s Patrick Jordon, last season’s 138-pound state champ, 3-2 in the semifinals to get there.

“That was huge for me,” Rudolph said of winning the title. “I set that goal for so long. I’ve been working for it and I just hadn’t been able to step up and do the job. It took a lot to get here. I’ve been working all offseason. There is no offseason for me between diet, cardio and constantly staying in shape, and just wrestling everyone I can around, going to all these local clubs and even hitting the road and going up to find the best partners to push me and make me better. It’s been a journey, but I finally did it and it feels great.”

Rudolph said he was left with mixed emotions after the Hawks failed to achieve its larger team goal but added that he was glad to have contributed to Skyline’s runner-up finish.

“I’m proud that I’m a part of that,” he said. “This team’s really accepted me into their culture and their program, and I wish I would’ve helped them get that title today.”

Domino, who had pinned New Kent’s Kyle Gibson earlier this season, couldn’t replicate that success in a 2-0 loss to the Trojans’ freshman in Sunday’s finals. Gibson scored the match’s only points on a takedown late in the first period.

Against New Kent’s Matthew Eberly, the 2020 106-pound state champ, Alyea fell behind 3-0 in the second period and closed the gap to 3-2 in the third but couldn’t complete the comeback despite Eberly showing visible signs of fatigue in the match’s closing moments.

Skyline’s Hunter Salomon (126 pounds), Wyatt Bosley (138) and Chris Moin (220) each fell in the semifinal round on Sunday, while Dustin Gue (182) and Nathan Haskins (195) both lost their opening quarterfinal bouts against New Kent. Salomon rebounded to take third, Gue placed fourth and Bosley, Haskins and Moin each placed fifth to give Skyline 10 medalists.

“If you look at it on paper, we probably weren’t as talented as we were last year, but this team had a mental edge … that I just haven’t seen in a long time,” said Symons, whose Hawks placed third in the state tournament in 2020. “These guys believed in themselves, and we came up a little bit short of what our end goal was here today but that doesn’t take away from the season these guys have had. … We’re very proud of these guys and the good thing is we’re only graduating three of them, so we have an opportunity to continue to build. … We’ll be right back here next year trying to do the exact same thing.”

“I was proud of them,” Wildcats coach Matt Wadas said. “This wasn’t a normal bracket. The only people here were champs and runners-up, so everybody was good. … Just the fact that we’re here is exciting, but the fact that we brought three and placed three, I couldn’t be prouder of these guys.”

Skyline’s Alex Sotelo (160) and Central freshmen Corey Chapman Jr. (120) and Tyler Forbes (220) each went 0-2 and were ousted from the state tournament. Chapman forfeited both matches and Forbes was pinned twice in his state tournament debut.