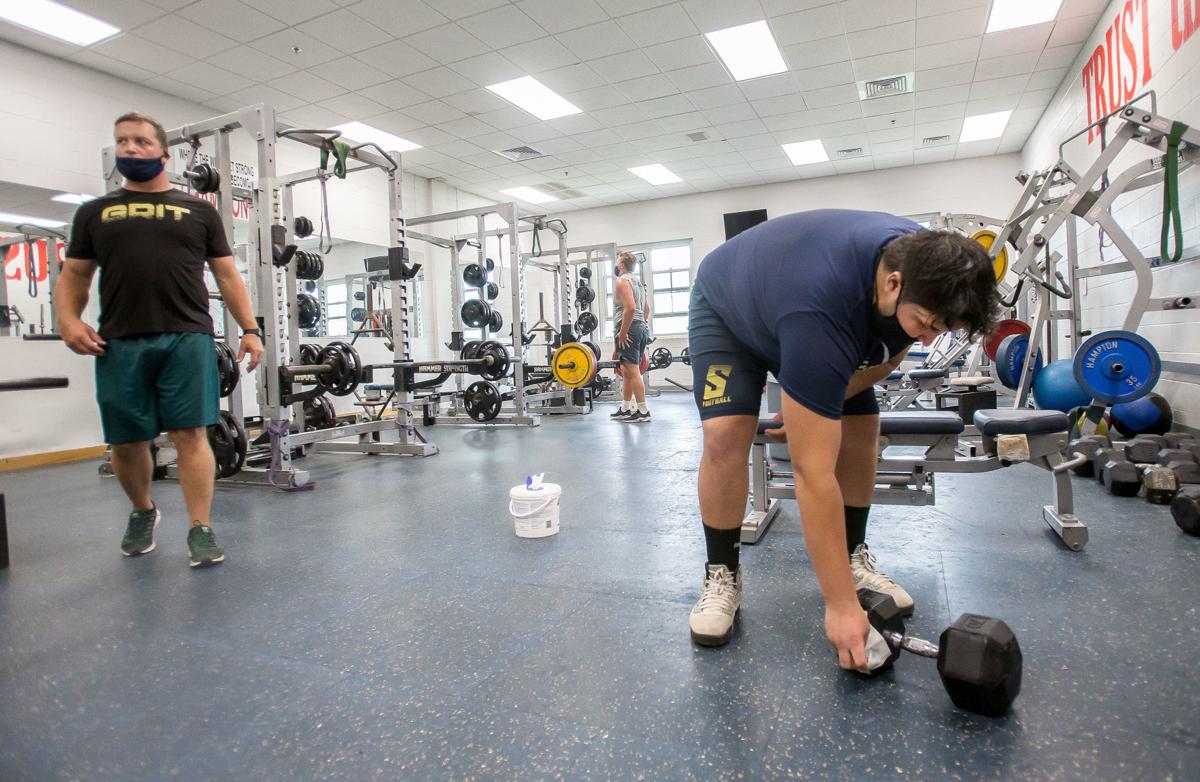 Left, Skyline’s Dathen Montoya, 15, uses a sanitized wipe as he cleans a dumbbell after working out Monday in the weight room at Skyline High School. The Virginia High School League allowed high schools to resume offseason workouts last month, and Skyline and Warren County high schools resumed out-of-season activities for the first time on Monday. Above right, Noah Kinsey swings a dumbbell in the hallway on Monday. 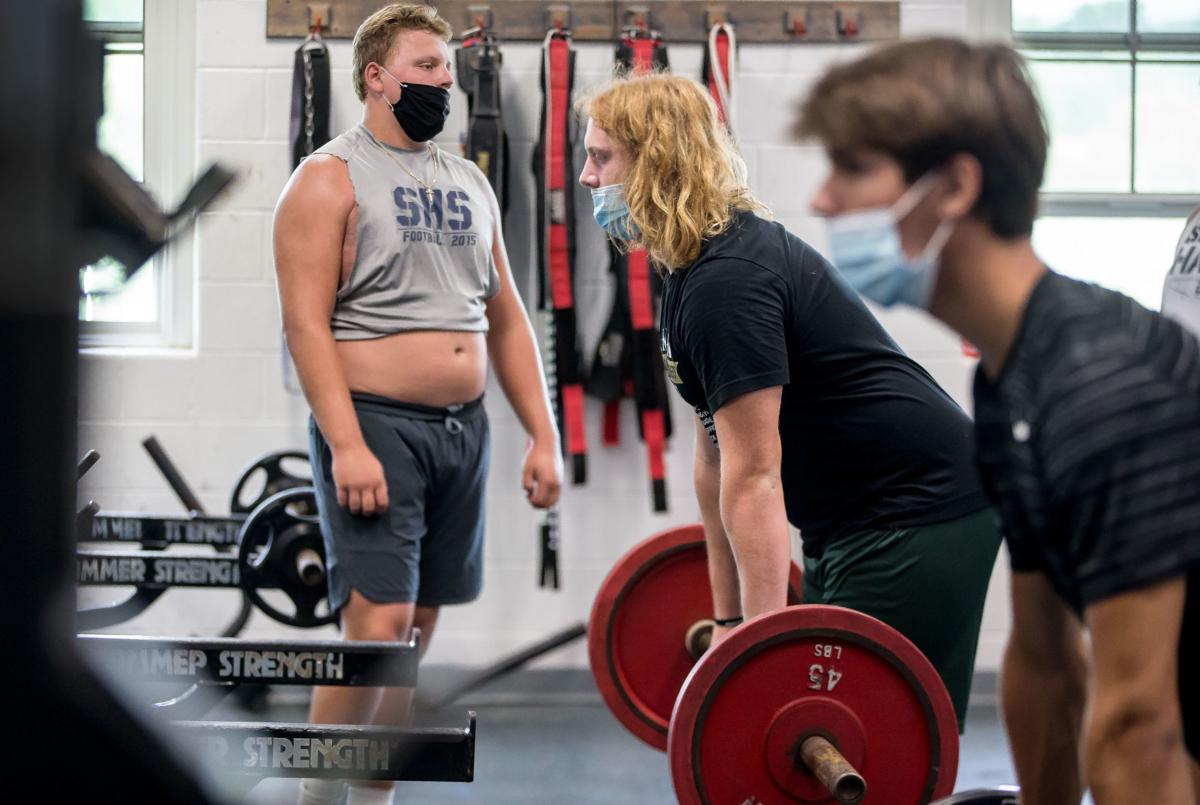 Skyline’s Miles Trowel, 17, performs deadlifts as he works out in the weight room on Monday. 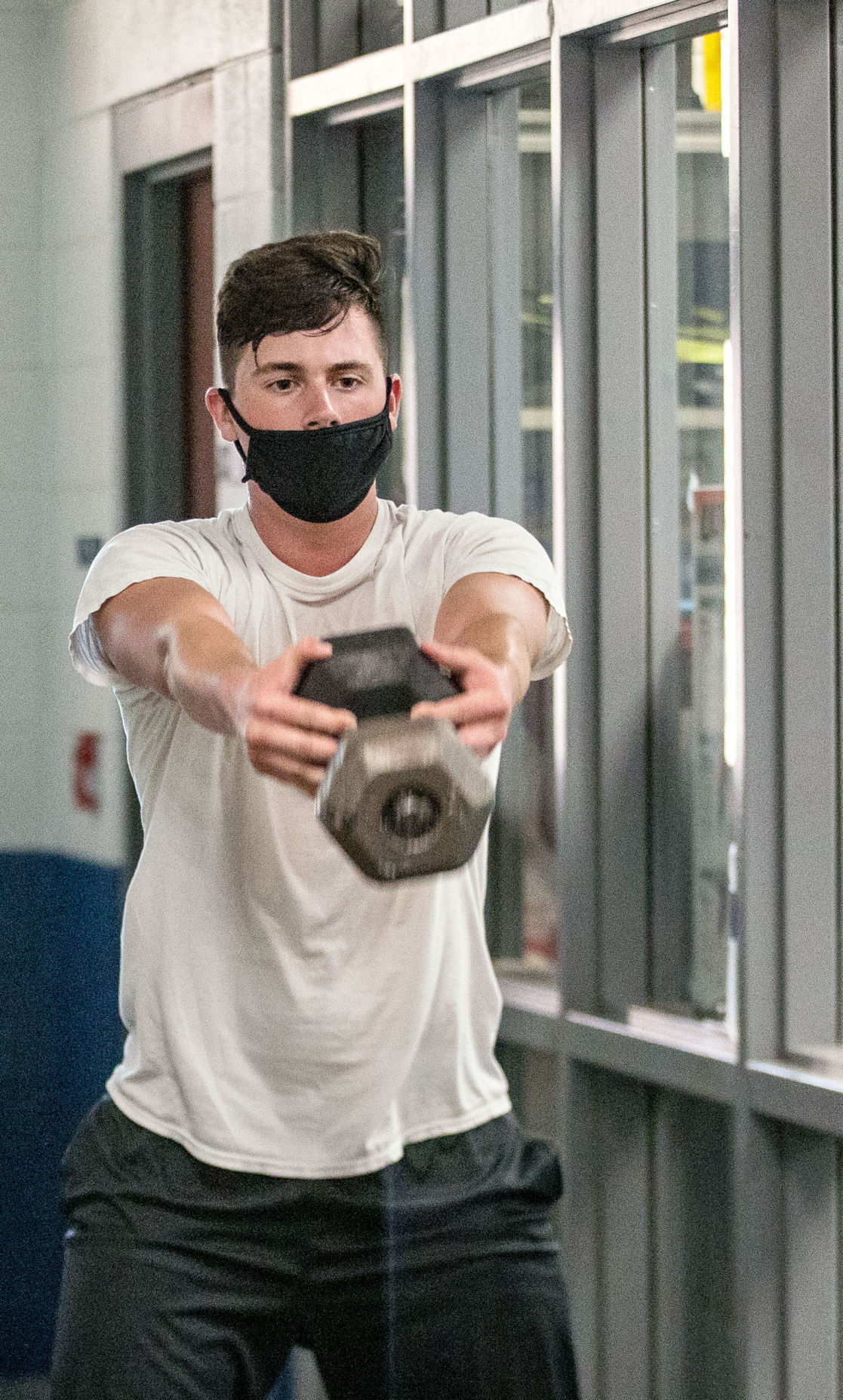 Noah Kinsey swings a dumbbell in the hallway on Monday. 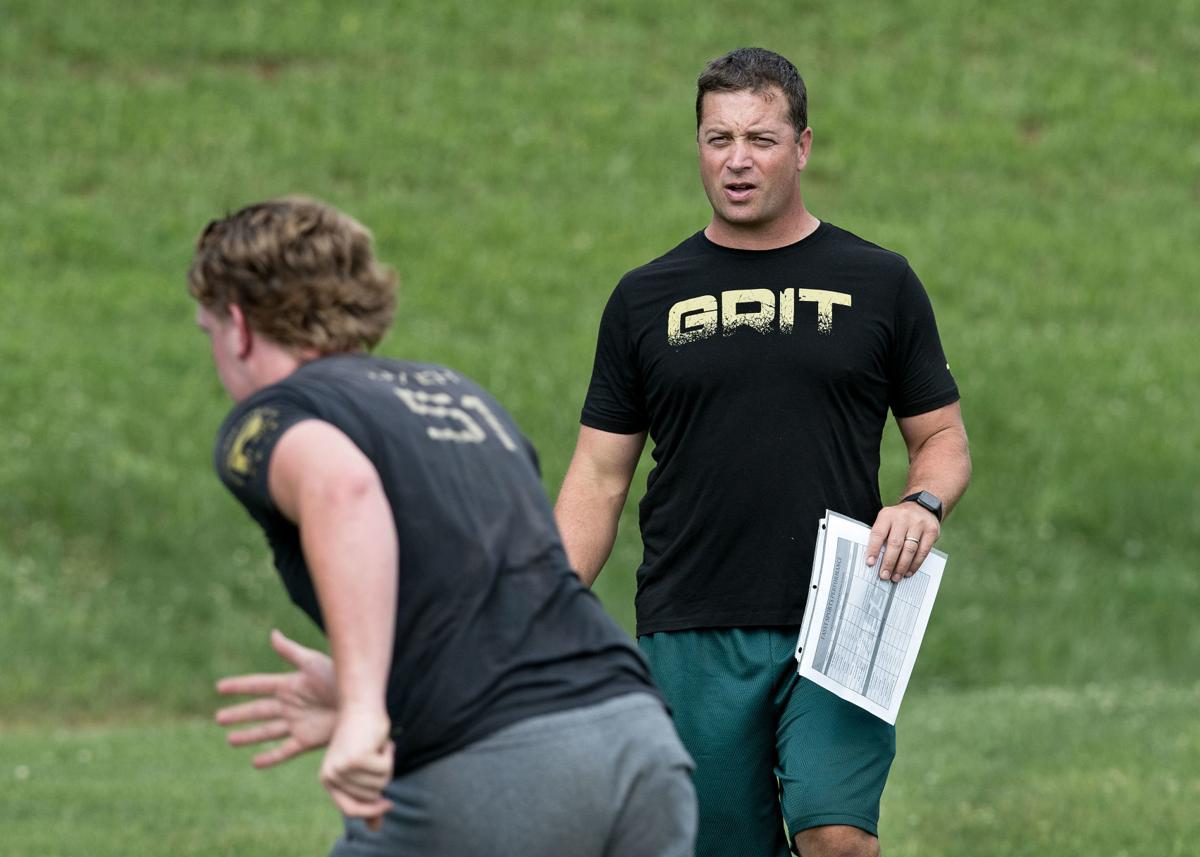 Left, Skyline’s Dathen Montoya, 15, uses a sanitized wipe as he cleans a dumbbell after working out Monday in the weight room at Skyline High School. The Virginia High School League allowed high schools to resume offseason workouts last month, and Skyline and Warren County high schools resumed out-of-season activities for the first time on Monday. Above right, Noah Kinsey swings a dumbbell in the hallway on Monday.

Skyline’s Miles Trowel, 17, performs deadlifts as he works out in the weight room on Monday.

Noah Kinsey swings a dumbbell in the hallway on Monday.

FRONT ROYAL – In any other year, Monday’s offseason football workouts at Skyline and Warren County high schools would’ve been standard practice, and likely would’ve even felt like a step back from the typical grind during a time when many teams would have already taken part in 7-on-7 competitions and begun installing their offensive and defensive schemes. But in 2020, Monday felt like a milestone moment.

It marked the first time since COVID-19 forced statewide shutdowns in mid-March that area schools reconvened for organized workouts. The Virginia High School League greenlighted out-of-season practices on June 15, though member schools and their respective divisions had to submit a health plan to the Virginia Department of Education before they could resume activities.

Skyline and Warren County were the first in the area to get started this week, as both schools’ football teams, as well as Warren County’s cross country team, held workouts on Monday, and Skyline’s cross country and sideline cheer teams joined in on Tuesday. Shenandoah County’s three schools plan to start up their workouts next week, and Sherando has yet to announce a start date for offseason activities.

Because of the restrictions designed to help prevent the spread of COVID-19 that remain in place, Monday’s football workouts at the two Front Royal schools were primitive, though they were a welcome change of pace after nearly four months of no high school sports activities of any form.

“To see these boys again and be around them, that was real exciting,” Skyline head football coach Heath Gilbert said after he took a group of 11 student-athletes through weight training and some conditioning work on the practice field on Monday morning. “It was hard to actually sleep last night because of this workout. That was definitely a different feeling.”

For Warren County head football coach Jerry Sarchet, who was hired in May, Monday presented his first opportunity to interact with some of his players face-to-face.

“It was nice to finally meet the kids and then watch them,” Sarchet said on Monday evening after the Wildcats conducted a workout session, consisting almost entirely of conditioning drills on the school’s practice field, with 31 student-athletes. “Zoom meetings and Google chats aren’t the same.”

As part of the safety measures schools are taking as their students return to the practice fields, gymnasiums and weight rooms, athletes are required to have their temperature taken and answer a handful of basic questions about their health and any potential exposure to COVID-19 before they’re allowed to take part in each workout session.

Members of Skyline’s football team also wore masks while in the weight room on Monday morning and wiped down equipment after each use. Gilbert, who said the Hawks split into groups of no more than 15 people for workouts, added that the floors of the weight room were mopped and the restrooms were cleaned between each session.

“It was different because obviously we have to clean equipment as we go,” said Skyline senior lineman Will Wolf. “We have to wipe it down after every rep, every set. We have to wear a mask in the weight room, can’t be right on top of each other when we’re outside. But you still get the aspect of ‘I’m with the team, these are my guys.’ You still get that feeling.”

Warren County Athletic Director Ed Dike said Tuesday that compliance with the safety protocols by student-athletes went “smooth as silk,” and Skyline AD Bill Cupp commended student-athletes and coaches for their willingness to follow the guidelines.

“They’re all just happy, I believe, to be able to do something,” Cupp said, “so they’re taking it seriously and following what we’re asking them to do and getting a good workout in and going home.”

Under the VHSL restrictions that are in place, student-athletes are not allowed to share equipment, meaning even simple activities like throwing a football to a teammate are off-limits. But despite the limitations, simply being in a team setting holds tremendous value.

“It just creates a little bonding for down the road because you’ve got to sweat together if you’re gonna bond,” Sarchet said. “I know we’re limited, but even then, I’m just looking down at the stadium like, ‘We could be running steps.’ There’s so much stuff we can do.”

“Any time you’re with the team, the relationships that we build make a difference,” Gilbert said. “When it’s on the line and you’re willing to battle for that guy next to you because you’ve been sweating for eight months together, it makes a big difference. Obviously we don’t have eight months because we lost that period since March but that’s still so important to be out here with them.”

Warren County seniors Wes Merchant and Bryce Post both said they were encouraged by the turnout and the effort at the Wildcats’ first football workout on Monday.

“Everyone put in effort, even the last run kids (were) throwing up, getting back up,” Merchant said. “You could tell there was great energy and everyone wanted to be here. Nobody was here because their mom told them to be.”

The coming weeks figure to be a test of character and commitment for student-athletes, particularly for the football players taking part in regular conditioning in the midsummer heat. The VHSL has yet to decide on the status of fall sports, and it remains unclear how long it will be before teams can advance past weight training and conditioning and into more sport-specific drills and practices.

Wolf said keeping everyone healthy remains a priority, and Gilbert added that Skyline’s coaches have encouraged players to wear masks when out in public to do their part in helping slow the spread of COVID-19.

“We’re just trying to save our football season and scientists say wearing a mask could help that, so we have to try to do that,” Gilbert said.