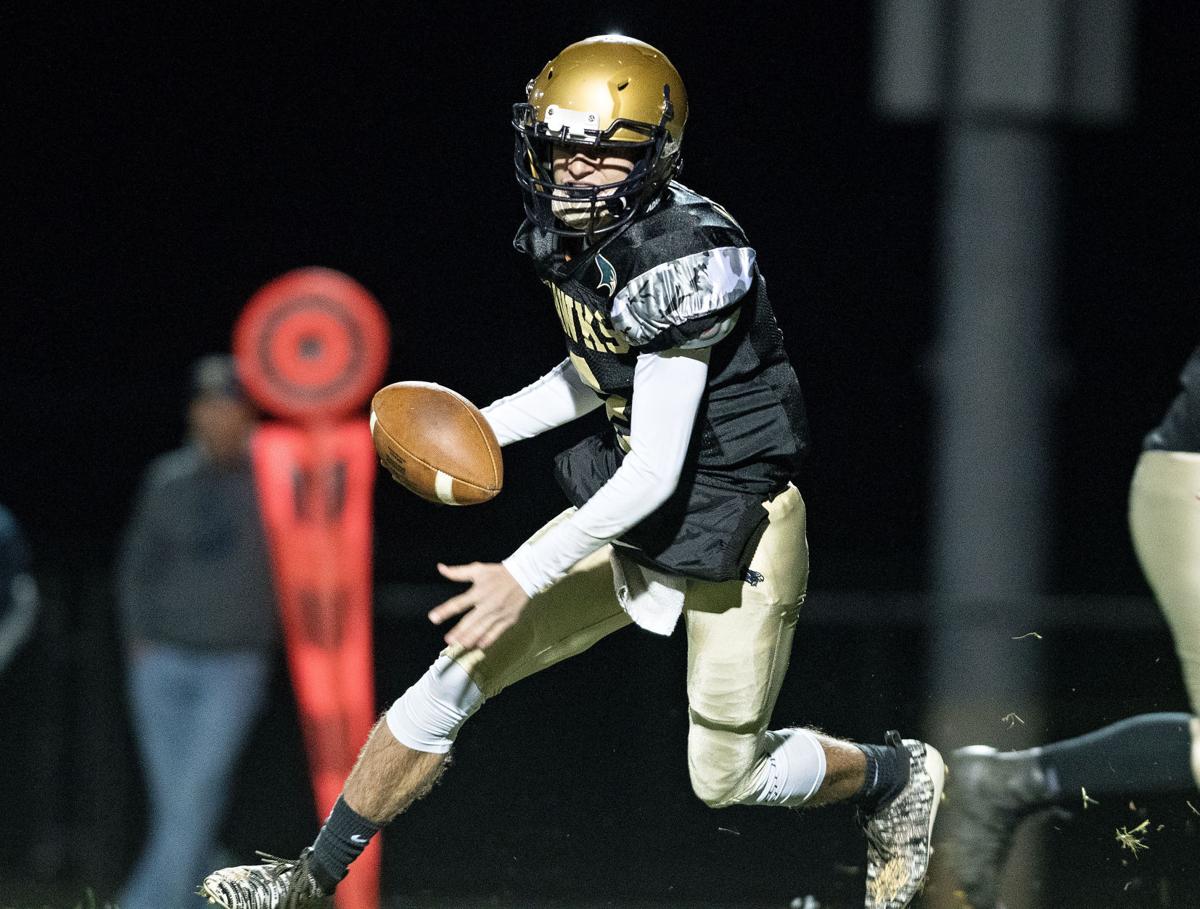 Skyline quarterback Blake Appleton scrambles in the backfield during a game last season against William Monroe in Front Royal. Appleton threw for over 2,000 yards last season for the Hawks. 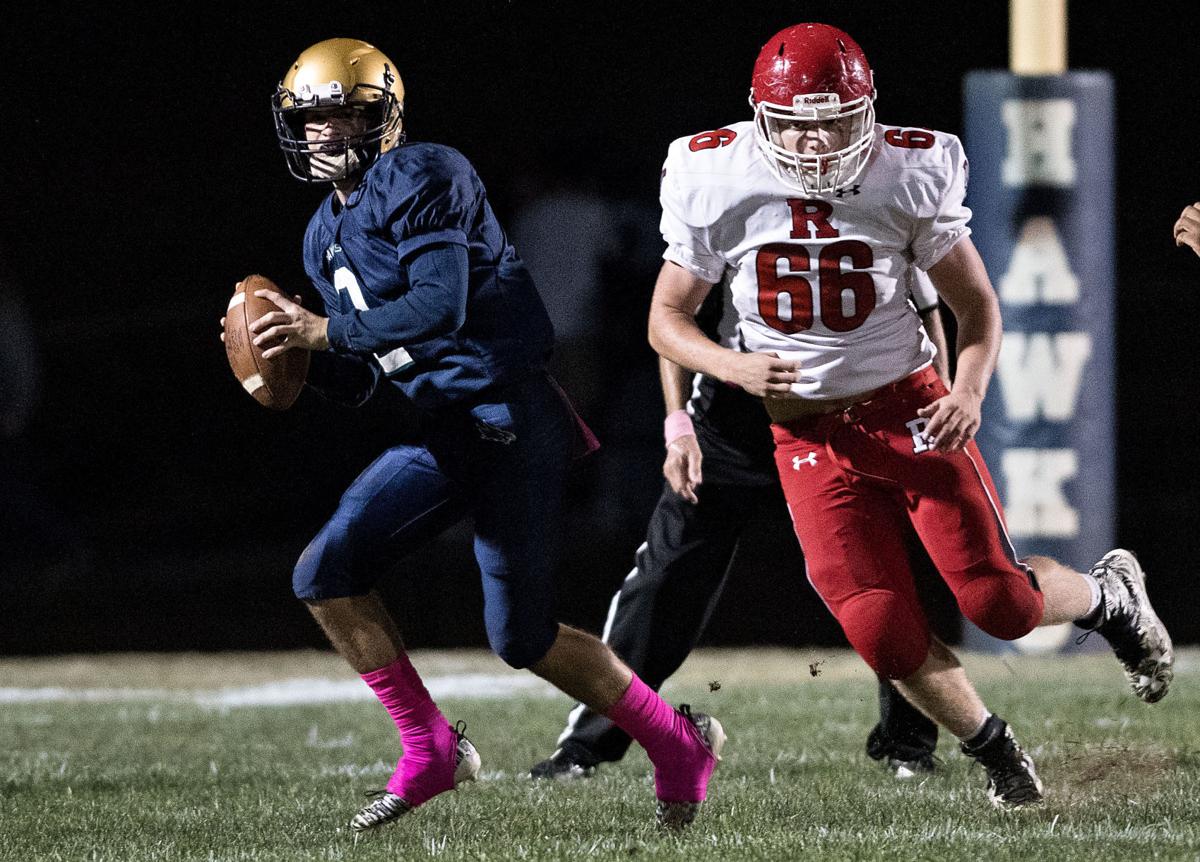 Skyline’s Blake Appleton scrambles in the backfield after being pursued by Riverheads’ Jameson Shover in a game last year. Appleton, a junior, is ready to lead the Hawks to another solid season when play begins on Feb. 27.

Skyline quarterback Blake Appleton scrambles in the backfield during a game last season against William Monroe in Front Royal. Appleton threw for over 2,000 yards last season for the Hawks.

Skyline’s Blake Appleton scrambles in the backfield after being pursued by Riverheads’ Jameson Shover in a game last year. Appleton, a junior, is ready to lead the Hawks to another solid season when play begins on Feb. 27.

The Skyline junior quarterback likes the big moments, the big games and the feeling of being the leader.

"It's exciting, especially when things end up going your way," Appleton said of playing under pressure. "There's no other feeling like when you're under pressure and you overcome that. There's no better feeling."

Appleton said that's one of the reasons why he loves to play quarterback. He said he's played quarterback since he first started playing in midget league and there's no position he would rather play.

"You get the ball every play," Appleton said. "You get to see what's going on. You get to call the shots, obviously coming from coach. It's pressure, a lot of pressure to play quarterback. But I like that, I like that feeling – everything's on you."

Appleton handled the pressure of playing quarterback well last season as he led the Hawks to the Region 3B semifinals, where they lost to powerhouse Goochland.

Even though he's a junior, Skyline head football coach Heath Gilbert said that Appleton is a leader on and off the field.

"If we need something to get done, we can ask him to make sure it happens for us," Gilbert said. "And he has more than enough clout with his teammates that they're willing to follow him. So it's tremendous. As far as what we want to do football-wise to have a kid that has the feet to do the read-option stuff, and smart enough to see the field and make the right decisions in the passing game – it's a pretty good combination."

Appleton said that leadership role has been something he's always loved doing and wants to do.

"I love playing that role; again it comes with pressure and I love feeling that," Appleton said. "I love feeling like I'm that guy that kind of pushes people in the right direction or kind of gets things going for the team and to be that guy to look up to. And when something's not going great or something's going bad, they need a guy to pick them up and head them in the right direction – I love being that guy."

Appleton said his game changed when he began to work with Tyrone Crabb, who is a quarterback coach at Mount Vernon High School, and works each week as a personal coach for Appleton.

"I've been working with him for years," Appleton said. "We've developed such a good relationship over the years and I wouldn't be where I am today without him. I went to a camp, it was a National Football Academy Camp and that's where I met coach Crabb. He reached out to my parents and said he saw potential and that he would really like to work with me and he thinks I have a bright future ahead of me, and eight years down the road look where we are now. ...He's just developed me into such a leader, a football player, a young man outside of football. He just helps with it all."

Appleton said that he meets with Crabb once or twice a week in Haymarket to work on his game.

The 5-foot-8 Appleton said he also works out five days a week with James Frisby and his staff at Frisby's Agility, Speed & Strength Training in Winchester.

"He's helped me physically, mentally," Appleton said of James Frisby. "He helps me prepare for a lot, and all the guys down there at FASST they do a great job doing what they do. I've always been a smaller guy, and I've always been overlooked because of my size. They helped me, like 'OK, you're a small guy but make do with what you got and go at it. You can't control your size, but you can control how hard you work and what you're willing to do with it.' There's not a day that goes by that I'm not trying to get better."

Appleton said he's always watched college and pro football and tries to learn from the higher levels as much as he can. He said he loves to watch 5-foot-11 quarterback Russell Wilson, of the NFL's Seattle Seahawks, play.

"I like Russell Wilson," Appleton said. "Russell Wilson, he's a smaller guy too, and I try to base my game off him too. He's a great guy to look up to, his game – we have a lot of similar things."

Appleton doesn't have to look too far for some inspiration in trying to make it to the next level. He said his cousin, Eric Kumah, is an inspiration. Kumah played at wide receiver at Virginia Tech for two years before transferring to Old Dominion University for a year. Kuma was second on the team for the Hokies in receptions in 2018 with 42 catches for 559 yards and seven scores.

Appleton said Kumah is preparing for the 2021 NFL Draft now and that the two talk a lot and Kumah gives him advice on playing football.

"He just tells me just control what you can control and just make plays and always work hard," Appleton said. "Because you don't know who's watching or when you're going to get your opportunity to shine. So just always be ready for that."

As a freshman, Appleton spent most of his year on the junior varsity squad. However, he was able to play in two varsity games. He went 10-for-19 for 68 passing yards.

"That just helped me to get my foot in the door," Appleton said of his freshman year. "It helped me kind of experience what varsity football was like. And seeing the relationship the guys had with each other, and the excitement they had on Friday nights and hitting people and scoring touchdowns. It was great."

Appleton said he gained confidence in his freshman season that allowed him to have a strong sophomore year.

As a sophomore, Appleton led the area with 2,084 passing yards. He was 148-for-250 with 25 touchdowns and eight interceptions.

Appleton said that he always has high expectations, so he wasn't that surprised by the numbers he and his teammates put up last season.

"I'd like to say that I expected that," Appleton said. "I always set the bar high for myself and that's what everybody's taught me to do over the years – set the bar high and you achieve high things. It didn't end well, the season didn't end like we wanted it to. But that's fueling us for this year and we want to come back for more than what we got last year. There's nothing like being in a locker room with those guys and just the relationships you develop with those people on and off the field. That bond is just unmatchable."

"I had good weapons around me," Appleton said. "I don't take full credit for that at all. I mean the guys up front in the trenches they're doing their job. I'm doing my job. Receivers catching the ball, running backs blocking – it's a team effort. I wish I could take full credit for it, but all the guys play a part in that."

It's been a different offseason due to the COVID-19 pandemic, but Appleton said he still has been training hard. Even during the lockdown, Appleton said he was doing everything he could around his house to get ready for the season, including watching film to see what he could improve on.

The Virginia High School League moved football season to February with a condensed schedule. The first practice is slated for Feb. 4. Skyline's first football contest is scheduled for Feb. 27 at home with George Mason.

While they wait for the season to start, the Hawks are playing in a 7-on-7 passing football league in Warrenton. Appleton said he's just enjoying playing the game he loves.

"It's going good," Appleton said. "We're clicking as a team. Everyone's on the same page. I'm just glad to be back out there with the guys and playing some type of football  because obviously it sucks not playing regular football right now. But anything we can do right now is better then nothing. I'm so glad to be back out there and getting better."

With the condensed schedule the Hawks will only play six regular season games. When asked what his goals were for the team this season, Appleton had a simple answer.

"6-0, 6-0," he said. "...This team has a lot of weapons offensively and defensively. There's so much spark and we're so electric. We have so many weapons it's insane. Everybody can do something special. And I feel like this team can really be special if we get our heads in the right place and do what we know we can do."

Only four teams will make the regional playoffs this year and Skyline has aspirations to not only be one of those but be the top seed. Gilbert said he has the same expectations for the team as Appleton does and the quarterback is one of the reasons they have those goals.

"Our expectation as a team is to be undefeated through our six regular season games – it is," Gilbert said. "We want to be the No. 1 seed because Goochland, James Monroe and whoever else gets in (the playoffs) they're going to be in that mix for the top four. We want that top seed and we want to host for that regional shot to go to the state final four, and Blake Appleton is a big reason why I think we can do it. There's obviously some other pieces, offensive line, some other wide receivers, skill positions, (senior) Darion (Santucci) being able to handle the run inside and the (2019 Class 3 Northwestern District) Defensive Player of the year back in (senior) Will Wolf. There's a lot of things to be excited about why we think that, but without Blake I don't know if we could have that goal."