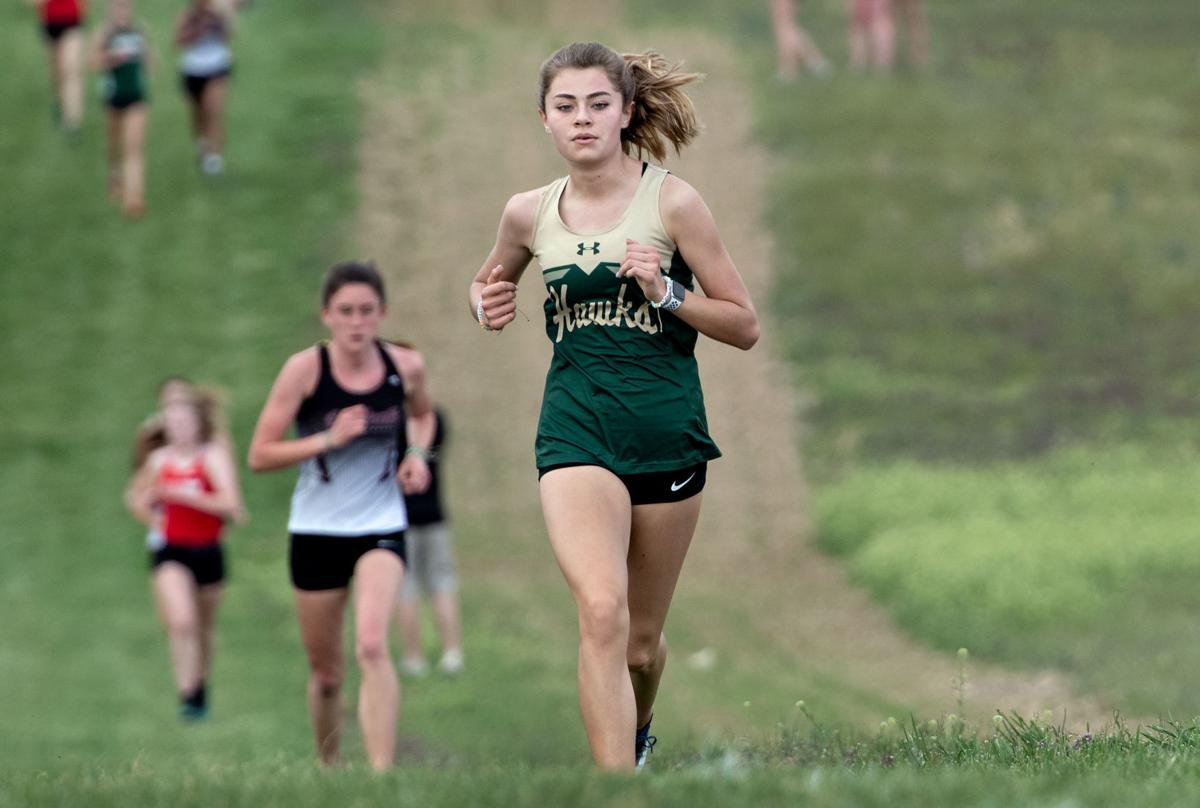 Skyline’s Ava Bordner leads this section of the race Wednesday as Warren County’s Kaley Tanner trails behind. Bordner won the race with a time of 19:11 and Tanner came in second at 19:29. 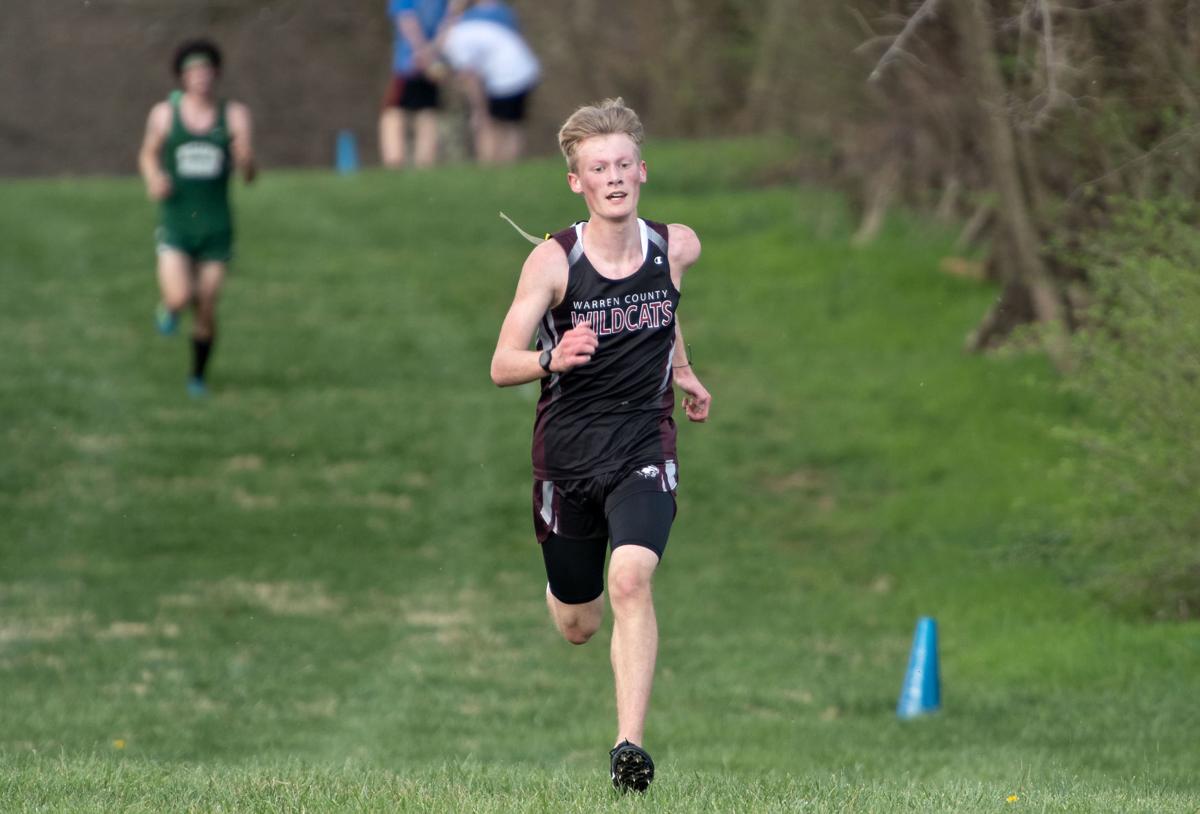 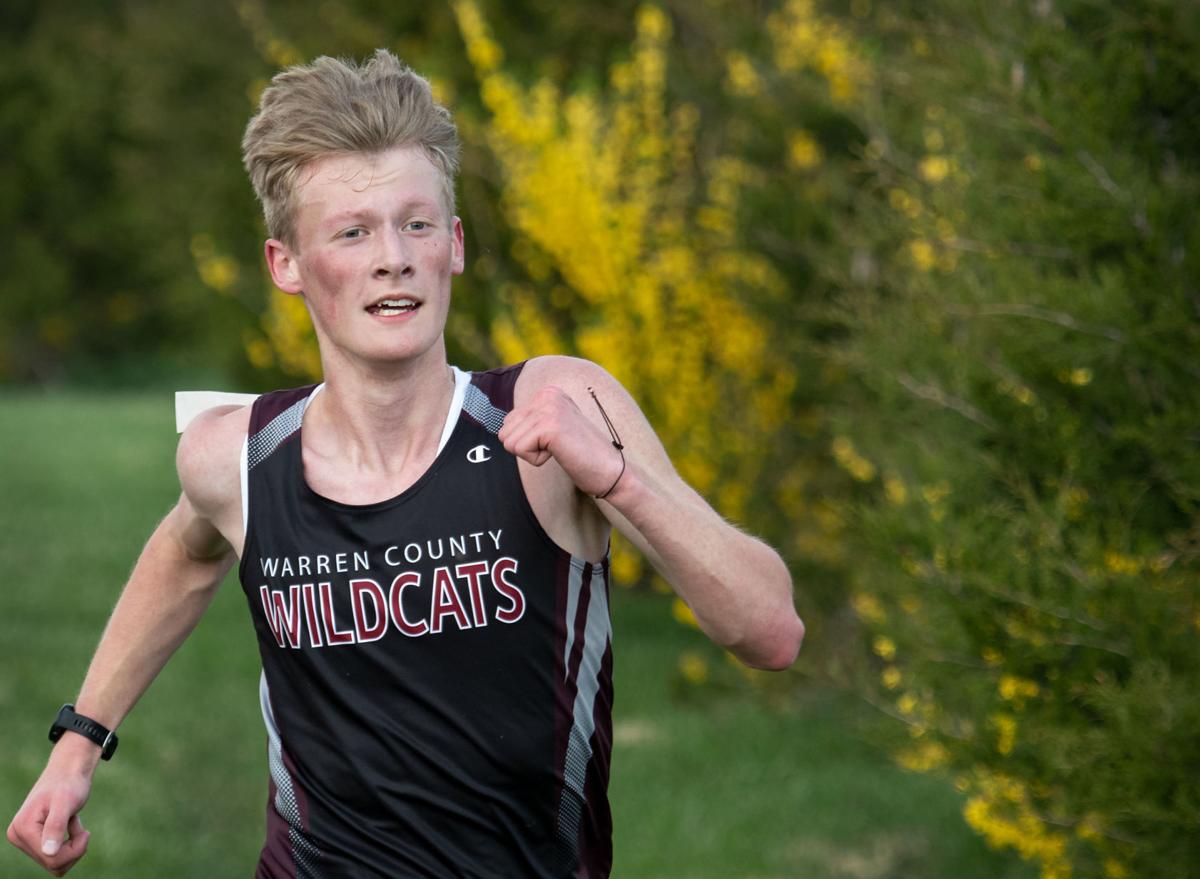 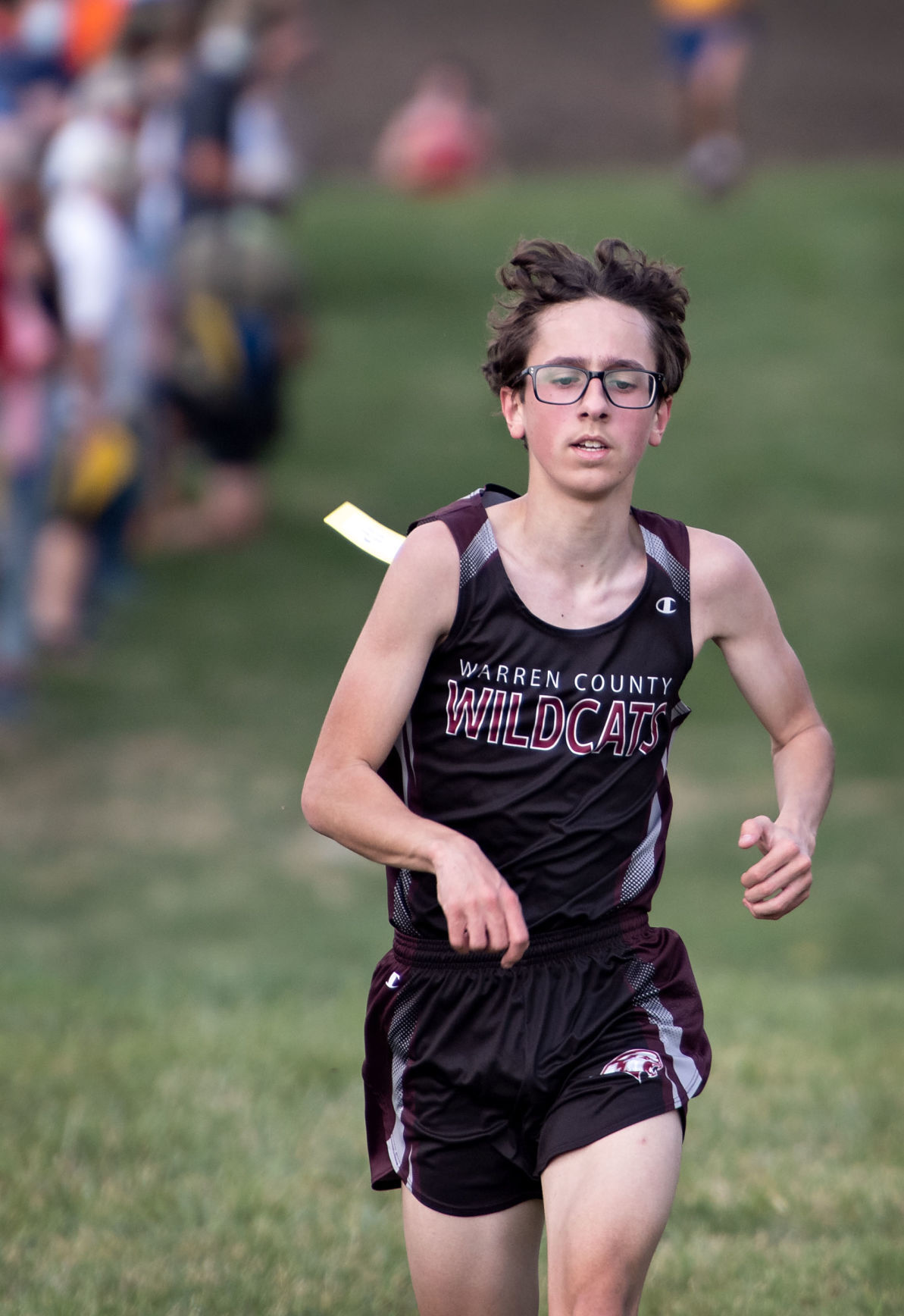 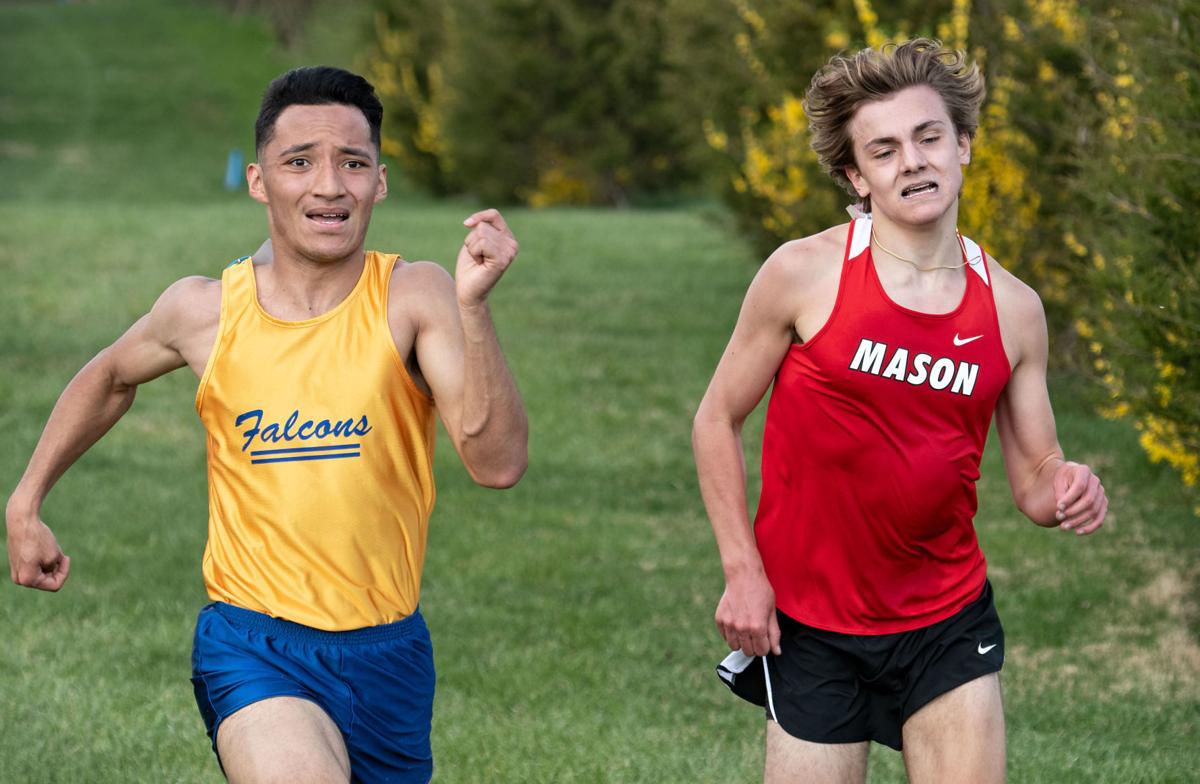 Skyline’s Ava Bordner leads this section of the race Wednesday as Warren County’s Kaley Tanner trails behind. Bordner won the race with a time of 19:11 and Tanner came in second at 19:29.

WOODSTOCK – Skyline sophomore Ava Bordner won the Class 3 Northwestern District girls cross country race for the second straight year, while Warren County freshman Emil Stanford made the most of his first district meet with a second-place finish in the boys race.

To top off a day of youth performing at a high level, Warren County’s young girls squad won the team title at the meet held at Central’s North Street Course.

Bordner won her race in a time of 19:11. She said that it was hot outside, but she just tried to put the hot weather out of her mind.

Stanford finished six seconds behind George Mason’s Colson Board for first place. Stanford said he wasn’t expecting to finish as high as second, but he was happy with how he raced.

“I felt great,” Stanford said. “For the first mile, I took it easy with the adrenaline from the gun going off and then after that, you’re just finishing off the race. Just don’t slow down, go for the finish line, catch the person in front of you. And once you pass that finish line there’s no greater feeling than going over to the water table.”

Warren County’s girls squad was led by freshman Kaley Tanner, who finished in a time of 19:29.

Warren County coach Mike Tanner, Kaley’s father, said he was proud of how she ran Wednesday and has performed all season.

“She’s been running well,” Mike Tanner said. “She works hard. She’s been doing two sports. She plays volleyball. I’m proud of her because she’s been able to manage the volleyball practices and the cross practices and games and keeping herself healthy and hydrated. And doing what she’s supposed to be doing in order to come here and do what she did today. So I’m very pleased with the maturity she has as a young freshman. She’s putting the work in and it’s paying off.”

Warren County only had seven runners available and only one is a senior. The Wildcats had six of the top 11 runners in Wednesday’s meet and finished with 30 points, 45 points ahead of second-place George Mason.

“They’ve been running like this for a few weeks now,” Mike Tanner said. “We don’t have much backup, only seven girls are able to run today. You’re allowed to run seven and they all did what they were supposed to do. So I’m very pleased obviously and very excited moving forward.”

Central finished fifth in the girls meet with 100 points and Skyline was sixth with 115.

Mike Tanner said he was pleased with the season Rankin is putting together.

“Clayton Rankin has made a huge improvement from last year,” Mike Tanner said. “He’s just been so consistent, kind of like Kaley (Tanner) in that he’s eating right. He comes to practice all the time. He’s dedicated, he’s focused and it’s paying off for him.”

Central’s boys finished third as a team with 70 points. Skyline finished sixth with 140.

The top 15 runners received a medal and were named to the All-Class 3 Northwestern District team.

Central coach Melissa Wright said that she was happy to have three runners in the top 10.

“It was exciting to see my three senior boys all able to run well and be able to medal and be all-district,” Wright said. “I thought that was a great way to finish for them here today. Juan (Rojas) had an incredible finish today. I’m very proud of him. I thought Shawn (Purdy) came out and ran incredibly well from the beginning to the end. I feel like he’s been training hard all season and he was able to put a complete race together today and to do well. I thought Dylan (Summitt) ran well, but it probably wasn’t one of his better races today. He’s been nursing (an injury). He ran really well at the (Shenandoah) County meet last week. So I think that probably took a little toll on him. And I think the heat probably affected him a little bit more today.”

Skyline coach Misty Bordner said she was happy with how her team performed considering the hot conditions.

“With the heat, I think that affected some of their times, and not being transitioned to the heat it affected them,” Misty Bordner said. “That’s something that we’ll have to work through and weather is always unpredictable. So that’s just a part of running.”

There is no qualification for next week’s Region 3B meet so all of the teams will be back in Woodstock on Tuesday. Only the top two teams and the top three individual runners not on those teams will advance to the Class 3 state meet.

Cross country powerhouse Maggie Walker Governor’s School will be at the regional meet, but Mike Tanner said he still likes his girls team’s chances to advance to states.

“We expect to move on,” he said. “I know it’s harder this year because of COVID you only have the two spots and three individuals, but we’re gunning for one of those two spots. That’s the goal, obviously, and I think we can do it. The girls are looking strong. There’s not much room for error when you have seven girls and that’s it. But if we keep healthy and we come ready to go I think we’ll be tough to beat.”

Ava Bordner, who finished second in regionals as a freshman, said she just wants herself and the team to do their best next week.

“I’m hoping that our team, that they can all get a (personal record) and they finish their season strong,” she said. “If they could get to states for their first year that would be great. I’m just hoping that for all of us, that we do our best. I’m hoping for me to get a PR, that would be awesome.”