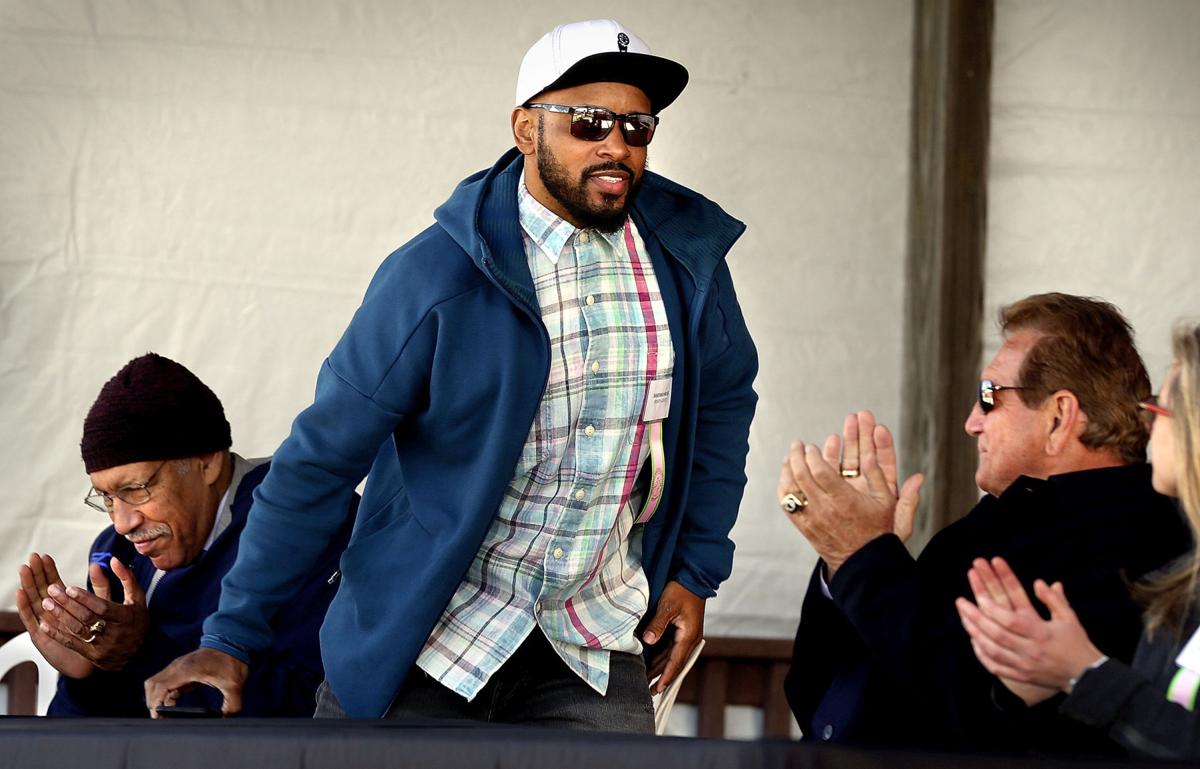 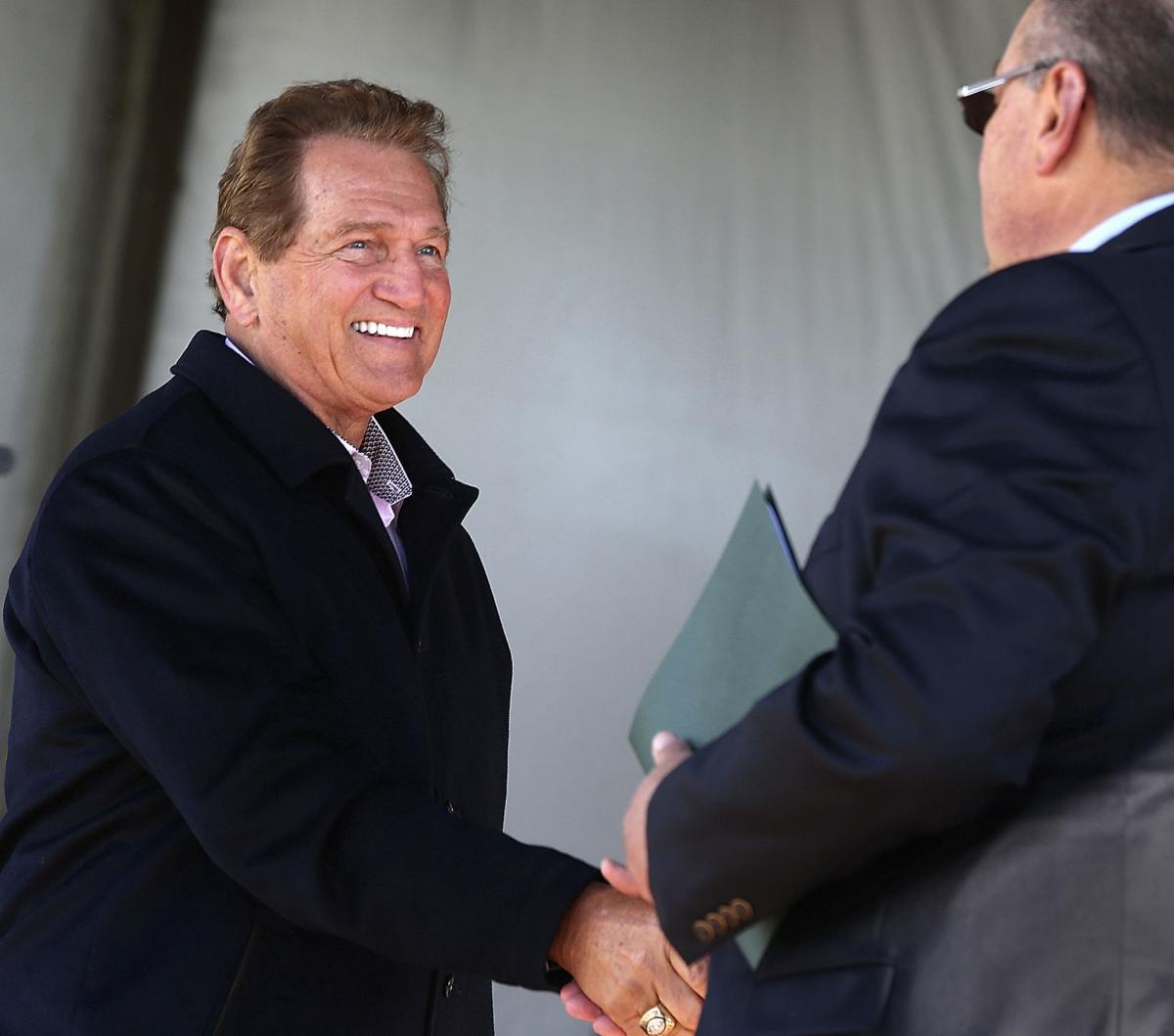 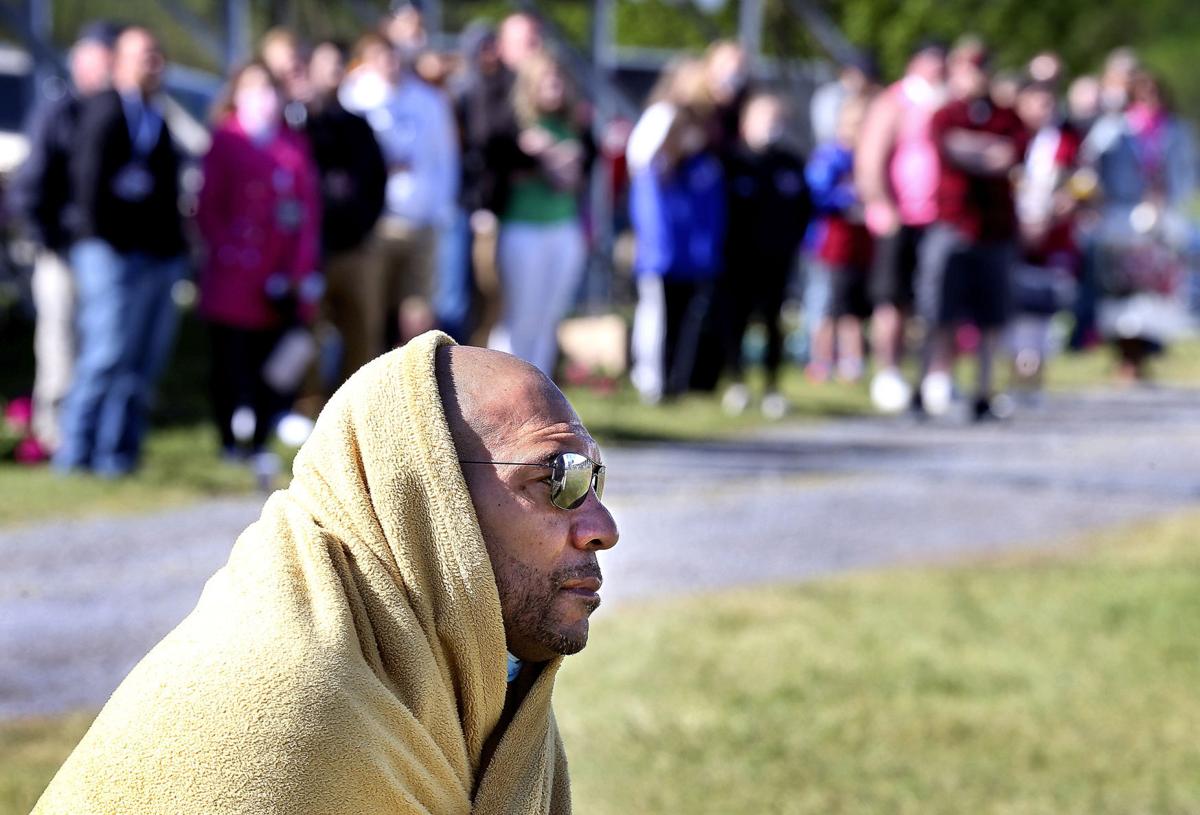 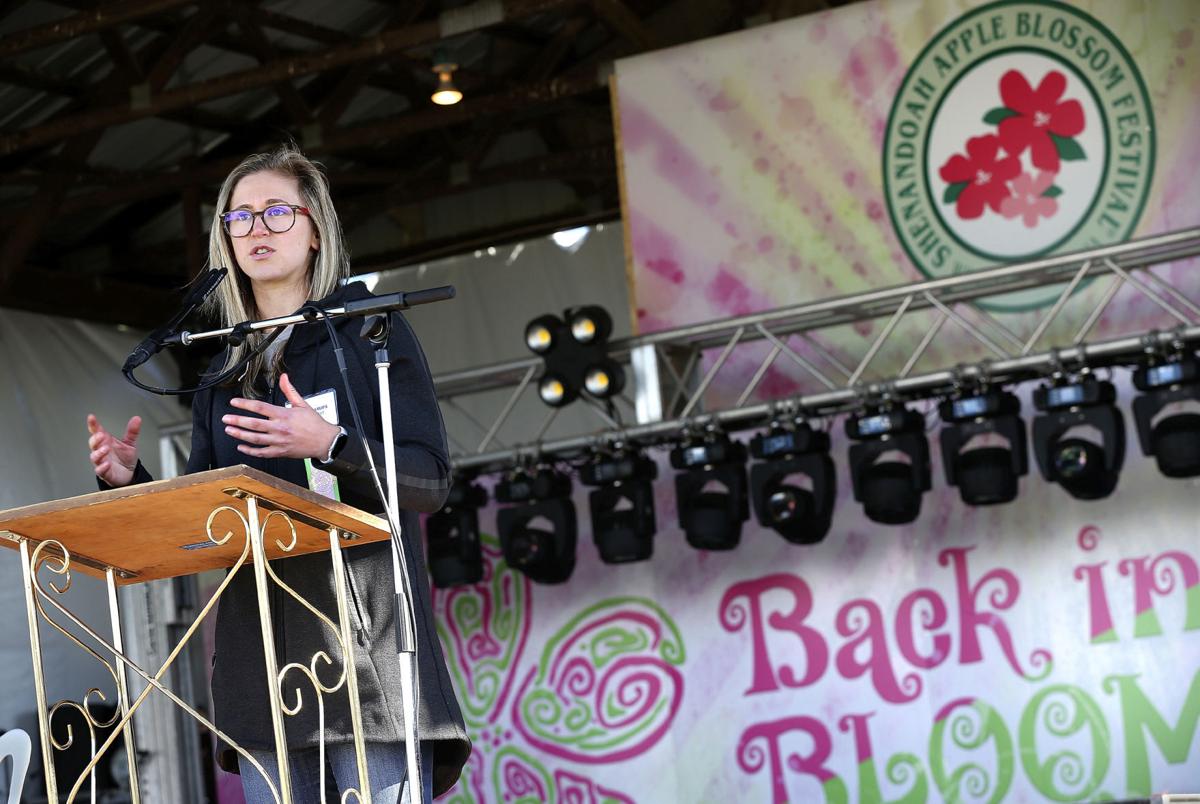 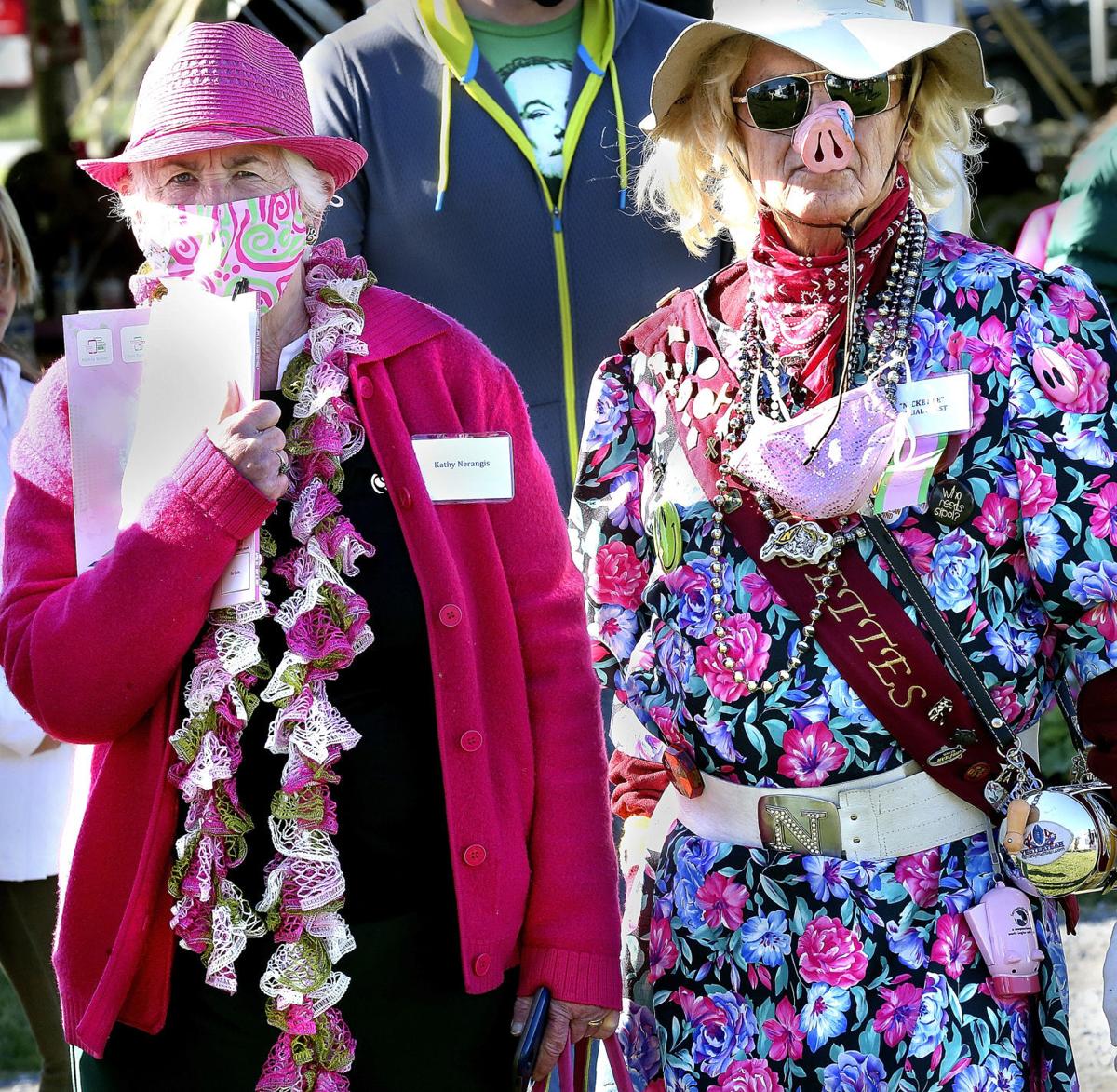 Kathy Nerangis, of Winchester, stands with her husband “Nickette The Hogette” Nick Nerangis, as he waits to speak during the 94th Shenandoah Apple Blossom Festival Sports Breakfast. 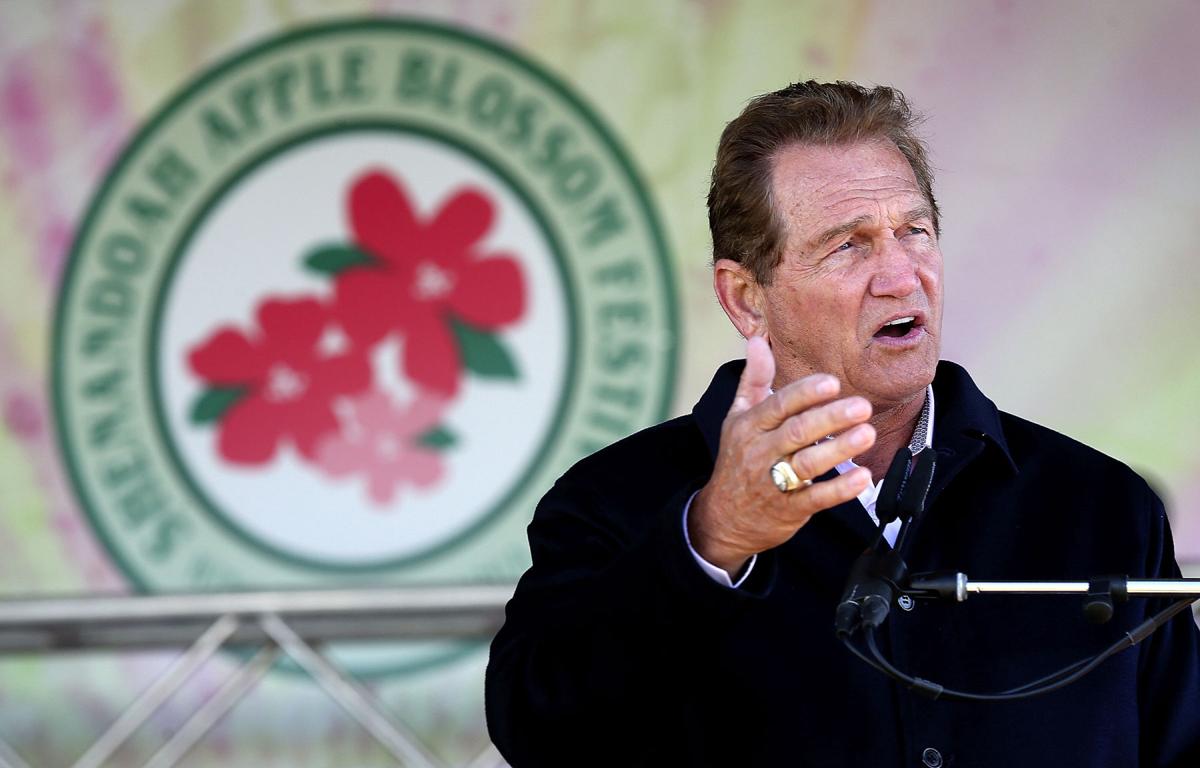 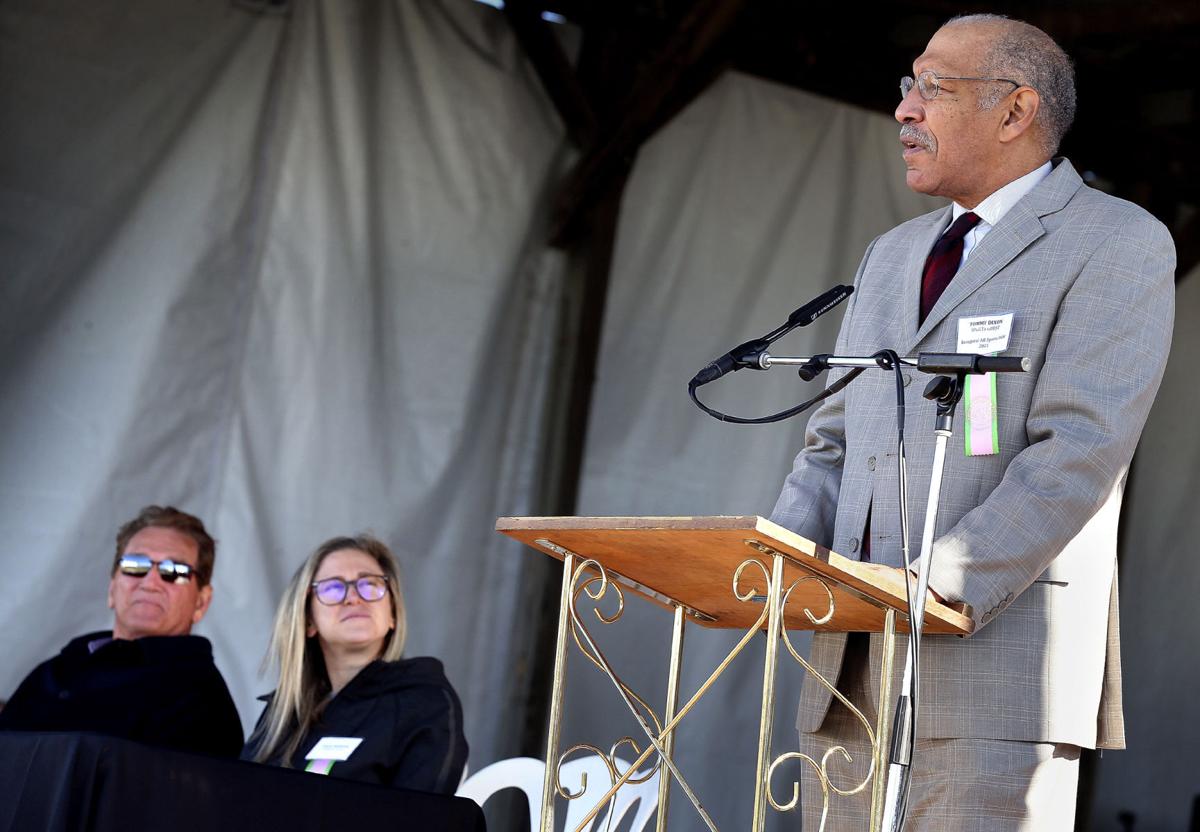 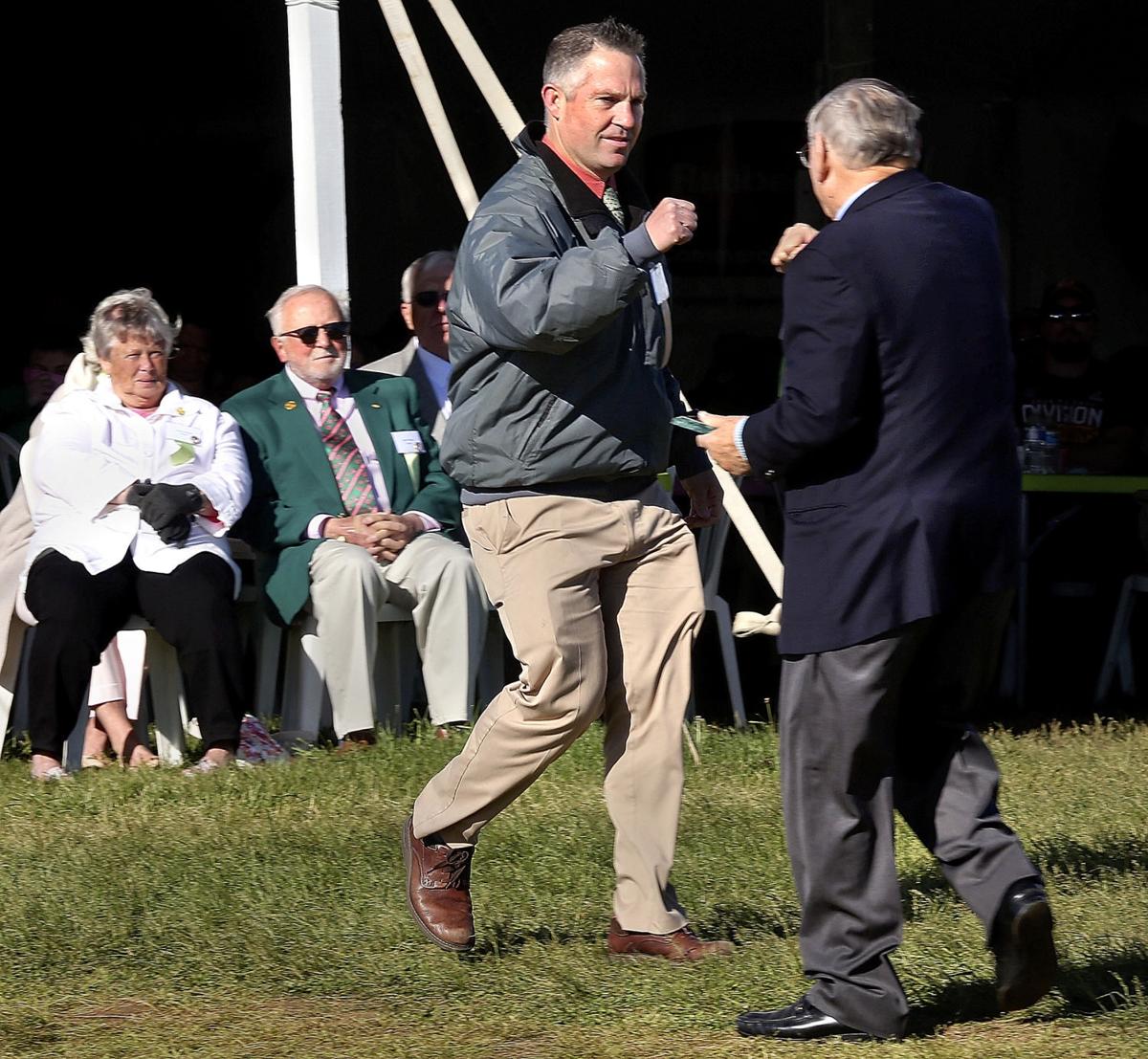 Kathy Nerangis, of Winchester, stands with her husband “Nickette The Hogette” Nick Nerangis, as he waits to speak during the 94th Shenandoah Apple Blossom Festival Sports Breakfast.

CLEAR BROOK — An outdoor setting isn’t traditional for the Partlow Insurance Sports Breakfast, but Joe Theismann summed up a lot of people’s feelings shortly after starting his remarks to a crowd of 650 on Saturday morning at the Frederick County Fairgrounds.

“Isn’t it just great to be outside, around one another again?” asked Theismann, who was answered with warm applause and whistles. “That’s what’s exciting about what we’re doing.”

From 1965 until 2019, people from all over have flocked to Winchester to listen to and possibly interact with sports figures that are renowned throughout the world at the annual Shenandoah Apple Blossom Festival Sports Breakfast.

Last year’s festival was canceled because of the COVID-19 pandemic, and it was obvious it was missed.

Former Washington Football Team players Theismann, the SABF Sports Marshal, and Santana Moss looked out from the podium to see two tents filled with burgundy-clad people, with some of them wearing Theismann’s No. 7 jersey and others the No. 89 uniform of Moss. Those two were joined on the tented podium by former Handley boys’ basketball coach Tommy Dixon and 2018 ice hockey gold medalist Haley Skarupa.

There were 250 people who bought VIP tickets and waited in line after the one-hour ceremony to get pictures and receive items like Theismann’s book, “How to be a Champion Every Day.” Ryan Steele of Bunker Hill, West Virginia, used the opportunity to have Moss sign a red No. 89 jersey with white numbers.

“I never got the chance to do the Apple Blossom thing much before this year,” the 28-year-old Steele said. “I worked in Winchester City, and I was always kept pretty busy during the Apple Blossom festivities. So this was cool. This worked out.”

The weather wasn’t perfect. Anyone who didn’t step out from under one of the tents was probably like Moss, who immediately told the crowd that he was shivering when he stepped to the microphone. But anyone who was looking to hear a few life lessons and laugh at some anecdotes wasn’t disappointed.

Theismann — who made his first appearance at the Sports Breakfast in 1975 as a co-Sports Marshal following his first year with Washington — spoke for nearly 20 minutes after Dixon, Skarupa and Moss.

Theismann was supposed to serve as a Sports Marshal at the 2020 Sports Breakfast before it was canceled. Theismann said the past year has given people a chance to examine who they are and he challenged the young people in the crowd to think about the most important part of their everyday lives.

“For the student-athletes, as you go forward, please remember the first part of how you’re identified,” said Theismann, whose 12-year NFL career ended with a gruesome broken leg injury in 1985. “You’re students first, athletes second. In the world of athletics, everything you have or hope to achieve can be taken away from you in an instant. If you just snap your fingers, that’s how quickly my career ended.

Theismann described the circumstances of his famous leg injury, the result of a sack by the New York Giants’ Lawrence Taylor on Nov. 18, 1985. Theismann generated laughter when he said his response to Giants coach Bill Parcells saying “I’m sorry, I’m sorry” was “So am I.” More laughs came when he said he apologized to Washington coach Joe Gibbs when Gibbs said, ‘Joe, you’ve done so much for this football team. This is a heck of a mess you’ve left me in.”

It’s a night that Theismann won’t forget, but not just because of the injury. Theismann felt he had become a self-absorbed player that season, and seeing 55,000 people give him a standing ovation touched him and made him realize that he needed to do better as a person.

“Fifty-five thousand people said thank you to a man who thought he needed absolutely no one,” Theismann said. “Ladies and gentlemen, I tell you this. You cannot, will not, nor will ever hope to be a true success in life if you think you do it by yourself.”

When the guest speaker portion of the event started, there was some brief silence initially. Emcee Mike O’Dell said the first speaker’s basketball impact in the area was so well known that he needed no introduction, so he walked away from the microphone for a few seconds. That person, of course, is Dixon. The 1971 Handley High School graduate coached the Judges from 1986-2013 and is the winningest coach in the school’s 97-year history.

But Dixon’s ability to teach basketball skills isn’t his most important trait. It’s his ability to lead students and athletes on a responsible path to adulthood that stands out most, and Dixon shared his four coaching rules on Saturday.

One of those rules actually allows for practice tardiness. If a player was getting help for a class, Dixon said it was OK to be late, because education takes priority over basketball.

His last rule involves school suspensions — if one of his players was issued one, they would have to run 1,000 laps for every day they were suspended. That punishment proved to be a deterrent for poor behavior. Dixon said only one player earned a suspension, and that player chose not to run, so he was dismissed from the team.

“I probably never would have asked him to run those thousand laps,” Dixon said. “As long as you were running and running, I’d probably let you go at 500, maybe 400.”

That comment drew some laughter, but Dixon wanted to do something that would help his players realize the importance of behaving responsibly.

Dixon closed his remarks by stating the importance of family. Dixon has four brothers and two sisters, and two parents that were more important to him than anything. His mother passed away when he was 15.

“The lessons that she taught me made me a better person for the rest of my life,” Dixon said. “My father was a quiet person, but he was a strong man, because he helped raise me and my younger brother and my sister, who were the last three at home. We missed our mother, but we knew we had that strong man that was taking care of us and making us better.

“I looked up to all my brothers. I’ve got two brothers left and one sister. Love the people who are around you right now, because you never know when they’re going to leave.”

Skarupa followed Dixon, and one thing she stressed was the importance of enjoying the moments as they come. For example, Skarupa’s hockey career allowed her to travel throughout Europe and Australia.

“It’s really easy to get caught up in the little things and always wanting to get better and putting a lot of pressure on yourself, and that was me growing up,” Skarupa said. “To kind of take a step back and realize all these amazing experiences that you’re able to be part of, and all of these people you’re meeting along the way, and the memories that you’re making, that’s something that’s extremely important.”

Moss told the crowd that events like the Sports Breakfast are important. When he was younger, he went to events where he received awards and had the opportunity to listen to guest speakers, and he would visualize himself being in a position to share words of advice.

Moss has that chance now with the 89 Ways to Give Foundation, a non-profit organization that mostly serves the youth of Northern Virginia.

“I know there’s a lot of student-athletes and a lot of kids that don’t get a chance to be amongst people like ourselves,” Moss said. “I have a saying when I go see these kids. I’m always like, ‘If you can touch me, you can be me.’

“A lot of kids see us on TV and see us doing what we do, and say, ‘Man, they had something more than I had.’ They just don’t know we had some of the same upbringings, some of the same setbacks, some of the things they’re going through, we face them every day. Even as professionals, even as successful men and women. So I go out there and do my thing and try to make sure that I’m that guy [that sets an example] for the community.”

Moss encouraged the student-athletes to focus on being successful no matter what career path they choose, and stressed that the dedication and commitment they developed in sports will serve them well throughout their lives.

Also appearing at Saturday’s event was retired Hogette Nick Nerangis, also known as “Nickette Hogette.” Nerangis spoke about the importance of helping others. Over the years, the Hogettes helped raise millions of dollars for National Capital Children’s Charities, including Ronald McDonald House, March of Dimes and Children’s Miracle Network.