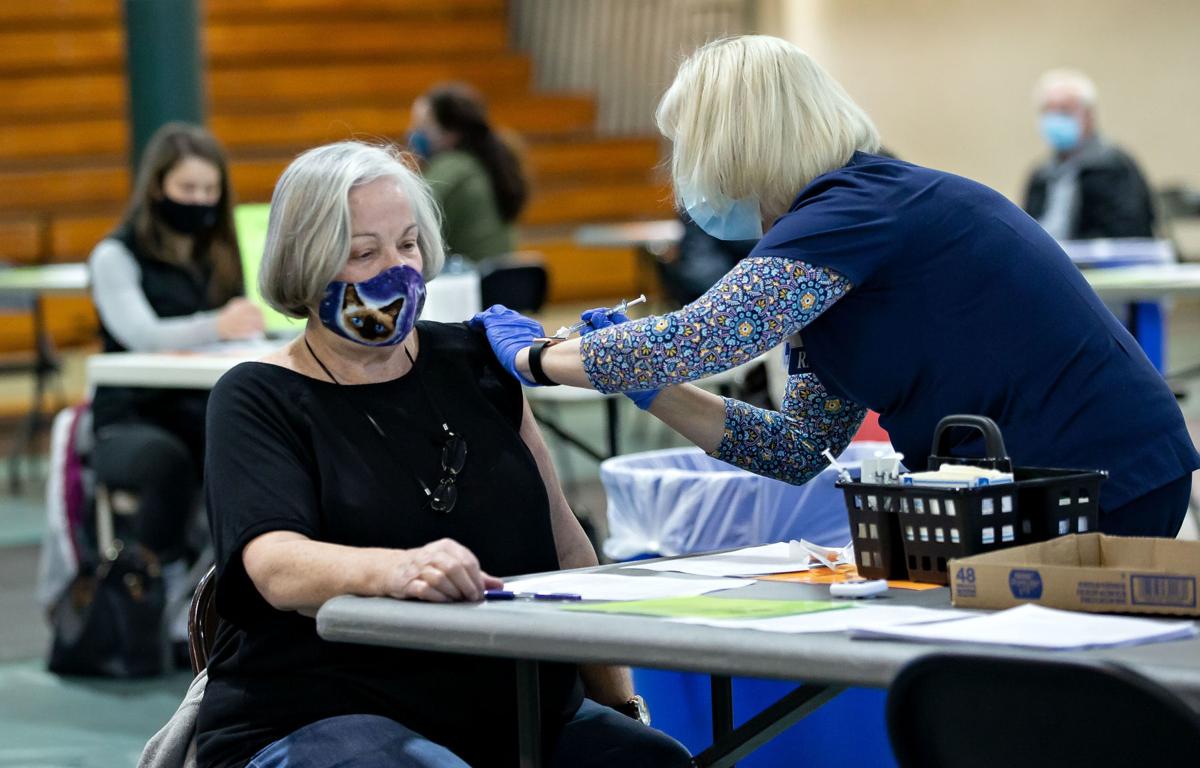 Joan Aylor, of Front Royal, is vaccinated by registered nurse Carol Hemmes at the COVID-19 clinic at the Warren County Health Department in Front Royal recently. 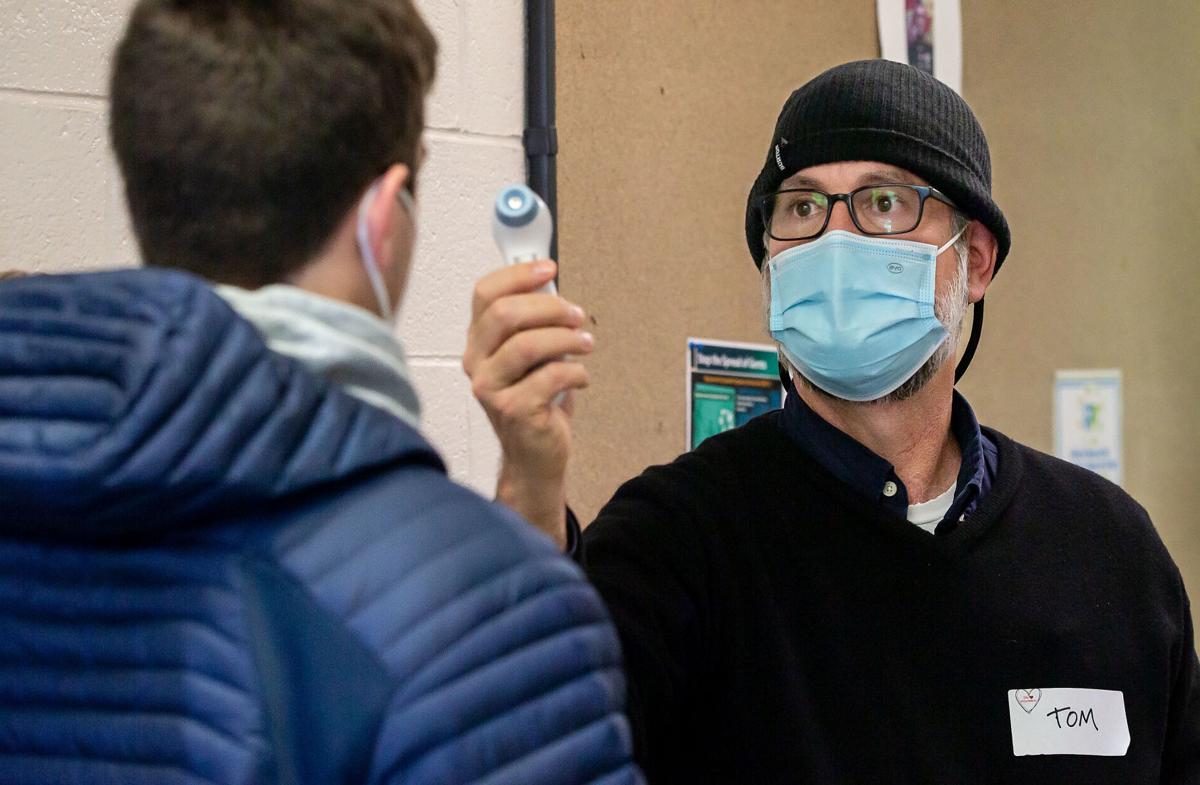 Tom Ameson, a clerical greeter from Harrisonburg, performs a temperature check at the vaccine clinic in Front Royal. Ameson is a retired volunteer. 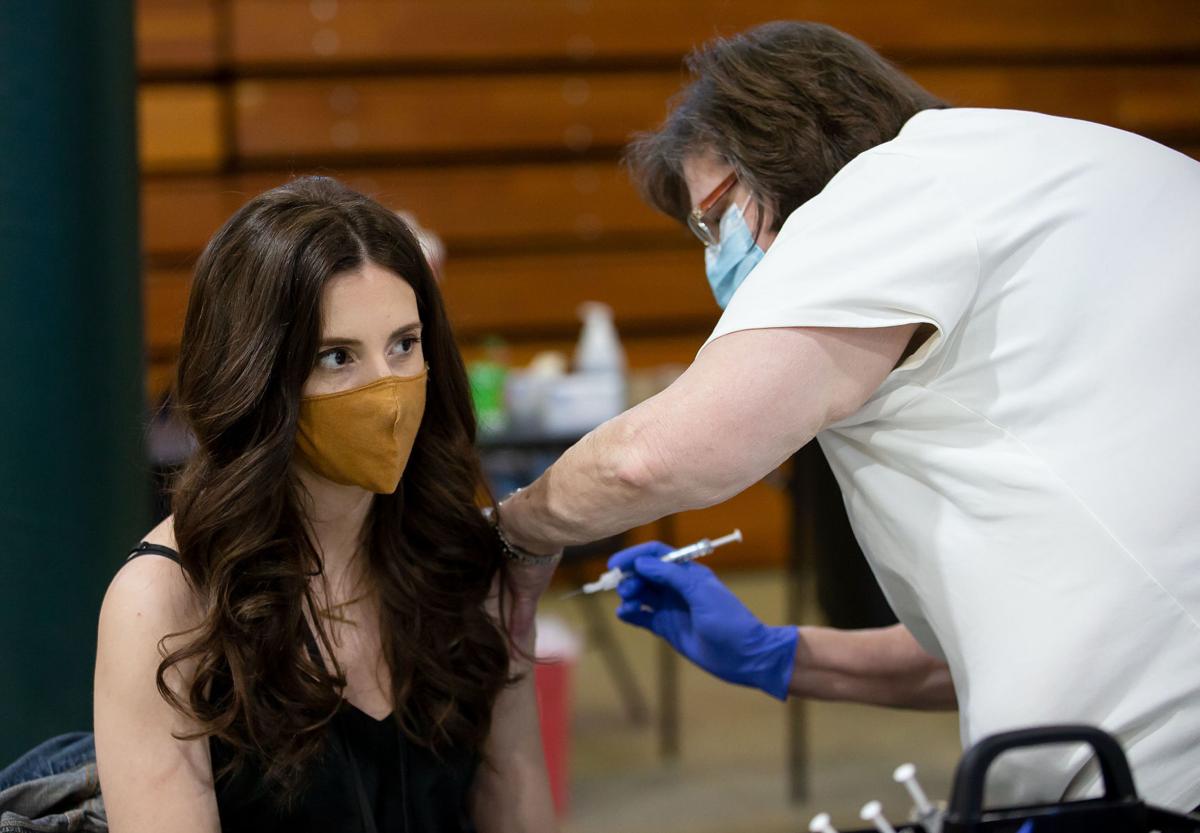 Amanda Smith, of Strasburg, gets vaccinated by Teri Moore, a retired RN, inside the clinic in Front Royal. 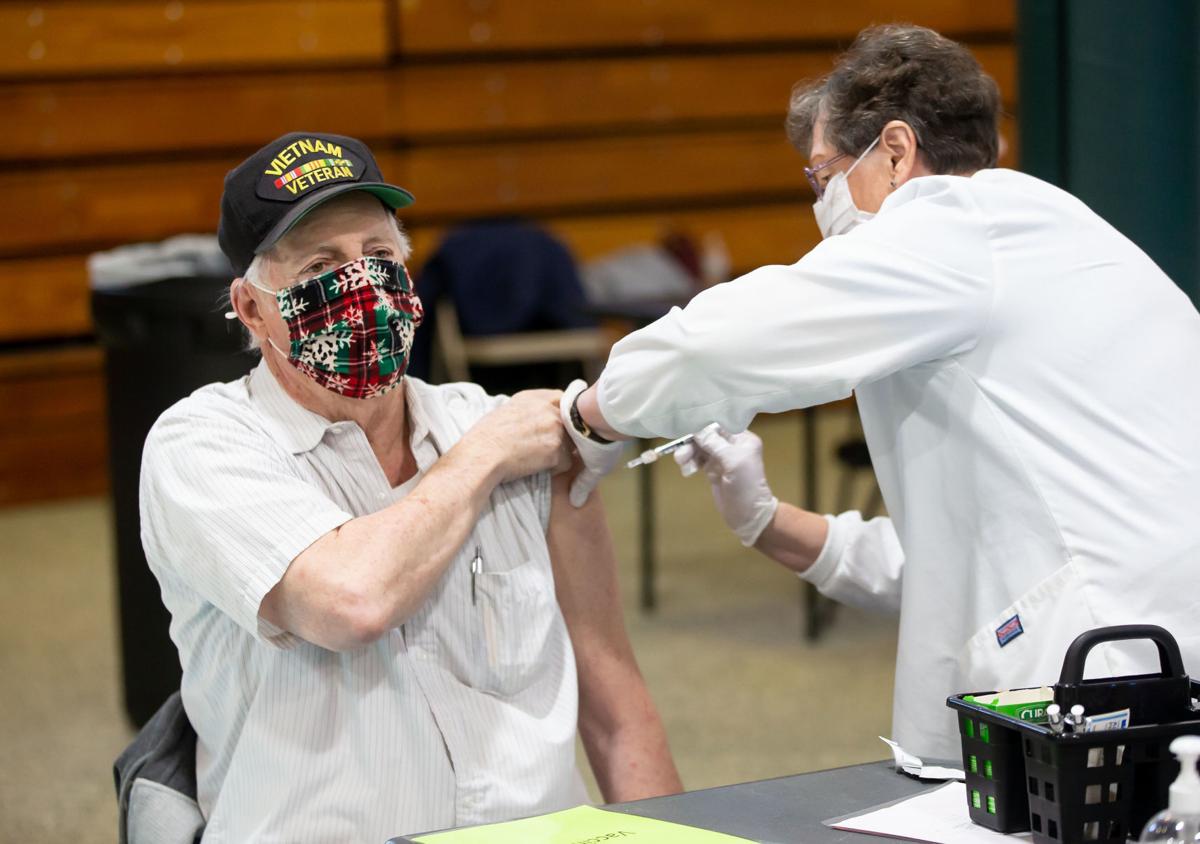 Ron Gray, of Marshall, rolls up his sleeve while registered nurse Peggy Davison administers his second shot at the clinic in Front Royal. 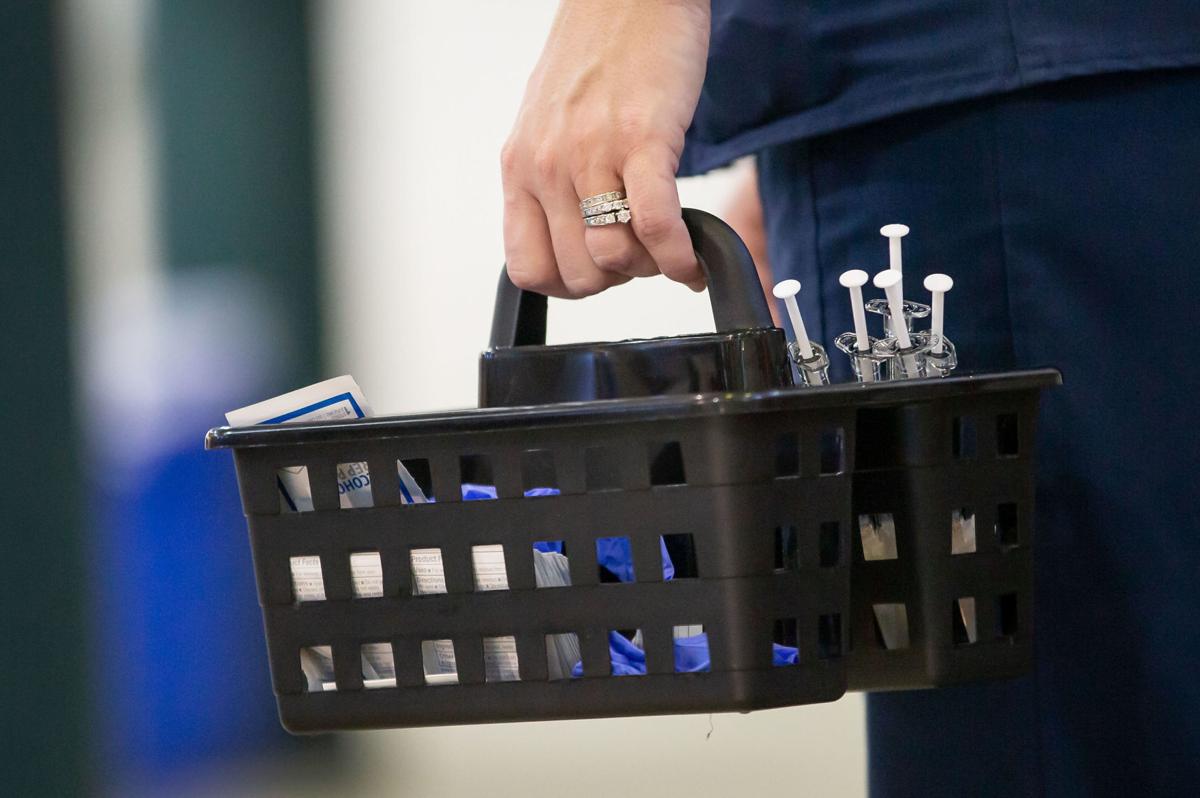 Chasity Jenkins holds her vaccine caddy as she waits for the next patient. The caddy holds vaccines, bandages, alcohol preps, and gloves. 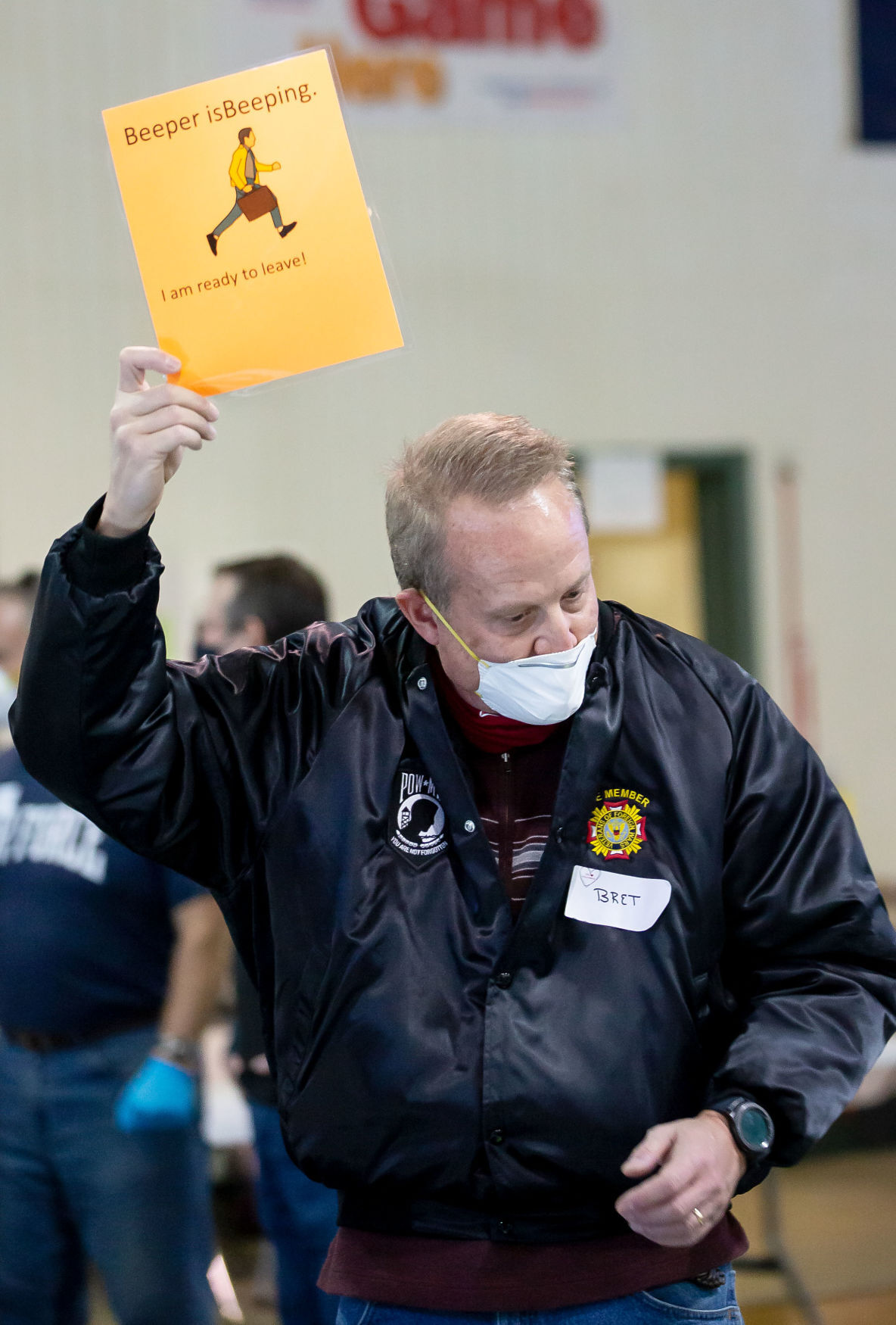 Bret Cockerham, a Kiwanis Club member, holds up a sign to show staff that a vaccinated patron’s 15-minute waiting period has expired. Cockerham is one of many volunteers who participated in the clinic in Front Royal on Wednesday.

Joan Aylor, of Front Royal, is vaccinated by registered nurse Carol Hemmes at the COVID-19 clinic at the Warren County Health Department in Front Royal recently.

Tom Ameson, a clerical greeter from Harrisonburg, performs a temperature check at the vaccine clinic in Front Royal. Ameson is a retired volunteer.

Amanda Smith, of Strasburg, gets vaccinated by Teri Moore, a retired RN, inside the clinic in Front Royal.

Ron Gray, of Marshall, rolls up his sleeve while registered nurse Peggy Davison administers his second shot at the clinic in Front Royal.

Chasity Jenkins holds her vaccine caddy as she waits for the next patient. The caddy holds vaccines, bandages, alcohol preps, and gloves.

Bret Cockerham, a Kiwanis Club member, holds up a sign to show staff that a vaccinated patron’s 15-minute waiting period has expired. Cockerham is one of many volunteers who participated in the clinic in Front Royal on Wednesday.

The mood at the Warren County Health Department during a recent second-dose COVID-19 vaccine clinic was one of thankfulness.

“The people who are coming through to get vaccines are so thankful,” said Tina Carter, a registered nurse helping with the effort.

At the door, people are screened for any symptoms of illness, and then they’re guided to a registration table where they confirm their appointment and take a seat at a vaccination table.

“The vaccinations go to them,” Carter said, explaining that the process cuts down on too much movement around the room. “We’re thinking about our population that may have difficulty moving.”

After their shot, they’re asked to remain in their seat for another 15 minutes to ensure they have no allergic reactions before they’re cleared to leave.

Though health care staff and volunteers weren’t sure what to expect initially, Carter said she’s been pleasantly surprised at how well it’s worked.

“It’s like a well-oiled machine,” she said. Everyone on the team is “making this work.”

Plus, she said, it’s nice to help the community through the pandemic.

“It’s so good to finally do something to fight this,” she said.

“We expected it to go well and it has,” said Jason Craig, director of urgent care for Valley Health’s central region.

So far he’s seen fewer people at the second-dose clinics. But even at first-dose clinics that bring in up to 2,500 people, he said patients and their guests have easily made their way through the events center in short order.

There, the process includes checking in, waiting to be called at your appointment time, receiving the vaccine and then moving to a waiting area where patients can listen to live or recorded music from students at Shenandoah Conservatory during the 15-minute observation period.

The whole process takes an hour or less, depending on the number of appointments that day, but so far volunteers, university staff, Valley Health officials and patients say the process has been quick, easy and fluid.

On Wednesday, she and her coworker Vicki Culbreth, development director of the mission, came to get their second doses, excited that they and residents at the mission would soon be better protected against the virus.

“It’s been beautiful,” Vann said of the quick process for getting both the first and second vaccines.

The shelter has partnered with the university to get its residents and staff immunized because of their high-risk status living and working in a congregate setting.

“If [the] staff shuts down, we go down,” Culbreth said of the rescue mission. “This partnership with Shenandoah has been a blessing.”

The university has also reached out to the Highland Food Pantry and the Congregational Community Action Project (CCAP) as well as other missions and area churches to encourage everyone who’s eligible for a vaccine to have the opportunity to receive it.

Though some may have concerns about the vaccine, Culbreth advised people with appointments to talk to the clinic volunteers when they arrive, saying, “they can calm your fears.”

Though Virginia is now focusing on people in Phase 1b, specific groups still vary by health district based on vaccine availability and who is considered most at risk from the virus.

In a statement, Jeffrey Feit, vice president of population health for Valley Health, explained that though people age 16 to 64 with chronic illnesses are included in Phase 1b, Valley Health has not yet extended eligibility to that specific population.

“The full 1b group includes those with various chronic diseases and risk factors such as obesity and smoking, which represents many more qualified people than we currently have vaccines to provide,” he said.

“Knowing that 95% of the people in our district who have died from COVID were over 60 years of age, with more than half being over 80, we continue to emphasize the importance of vaccinating those most at risk based on their age or residence in a long-term care facility,” he said.

As of Friday, a notice at Valley Health’s website, available at tinyurl.com/2igbbql9, said appointments for first vaccines are not available while the region waits on another shipment of vaccines.

However, CVS issued a statement this week with plans to start taking appointments through its website, cvs.com, or the CVS app, as early as Tuesday for vaccine times beginning Thursday. A phone number is available at 800-746-7287. Winchester, Woodstock and Harrisonburg were included with 30 other towns or cities in the initial Virginia rollout of 36 store locations.

The Lord Fairfax Health District announced on Thursday the addition of second-dose clinics at the Clarke County Health Department, 100 N. Buckmarsh St., Berryville, and Frederick/Winchester Health Department, 10 Baker St., Winchester, planned Monday and Wednesday for people vaccinated at the fire hall on Jan. 11. The clinics are for second doses and are by appointment only.

The Health Department will reach out to those who attended the Boyce clinic, a district news release explained. For more information, go to vdh.virginia.gov/covid-19-vaccine.

“These are second-shot clinics only,” Lord Fairfax Health District Director Dr. Colin Greene states in the release. “They are designed to allow those who were vaccinated at Boyce Fire Hall to receive their booster shot, and to maximize their chance of achieving lasting immunity to COVID-19.”

Though Valley Health and the Health Department email a link to people scheduling their second-dose vaccine, Craig warned people not to share their private link, because that has resulted in others using it to sign up for first-dose appointments that strain the availability of vaccines for second doses.

“The process is in place,” he said. Using the link for a first dose steals a second dose from someone else.

Valley Health asks people looking for a first dose to check back at its website each weekday at noon for updates on vaccine availability.

The health system also recently established a call line to assist those without internet access at 888-441-5294, though it warned that a limited number of appointments can be made for those without Internet access, and wait times can be extensive.

On Friday, Virginia Gov. Ralph Northam said his office is working on another call line where people can make appointments and receive callbacks when schedules open up.

He said training for 750 new call center workers is expected to be completed within the week. The call center will offer options in English and Spanish with requests for callbacks in more than 60 other languages.

People who pre-register through the system will have their information forwarded to their health district, he said, so they won’t have to pre-register again.

Though CVS is the first to partner with Virginia through the federal pharmacy partnership program, Northam said Walmart, Walgreens and Kroger are also on board to carry the vaccine soon.

In Front Royal, pharmacists from Warren Memorial Hospital wanted to assure the community that vaccine appointment cancellations will not result in vaccines being thrown away.

Tina Royston, a hospital pharmacist, said the staff keeps the vaccine's temperature regulated in a cooler on site and that they are safe there under refrigeration.

Any unused vaccines can be shipped to other clinics in the area and the Pfizer vaccine can be kept refrigerated for up to five days, she said.

“We make sure that we move it around so that it doesn’t get wasted,” she said.

Once they’re drawn up in a syringe onsite, the vaccines are good at room temperature for six hours, said Sarah Nordberg, a pharmacist at WMC.

Glad to be part of the effort, fellow pharmacist Reanna Fletcher said it’s been a unique experience learning about the COVID-19 vaccines, which work so differently than others they’re used to handling.

The COVID-19 vaccine can be diluted with saline, she said, but doesn’t include an injection of air that other vaccines use. Instead, she said, after injecting the vaccine, she removes air from the body to equalize the pressure and account for the fluid she injected.

“Normally, it’s the opposite,” Fletcher said. “It’s interesting for us, too.”

Other differences, Royston said, are that most vaccines are single-dose and most are not kept frozen. The shingles vaccine and the typhoid vaccine are a couple of exceptions, she said.

Remarking on the community’s gratefulness to get the vaccine, Carter said she was equally grateful for the community’s support in bringing food to staff and volunteers at the clinic sites.

RN Chasity Jenkins agreed that the staff gets “a lot of thank yous” from “wonderful people, very grateful.”

Carter asked to extend “a big thank-you” as well.

To find out if you’re eligible for a vaccine, go to Valley Health’s website or its FAQ page at this link: tinyurl.com/srpsedj2.