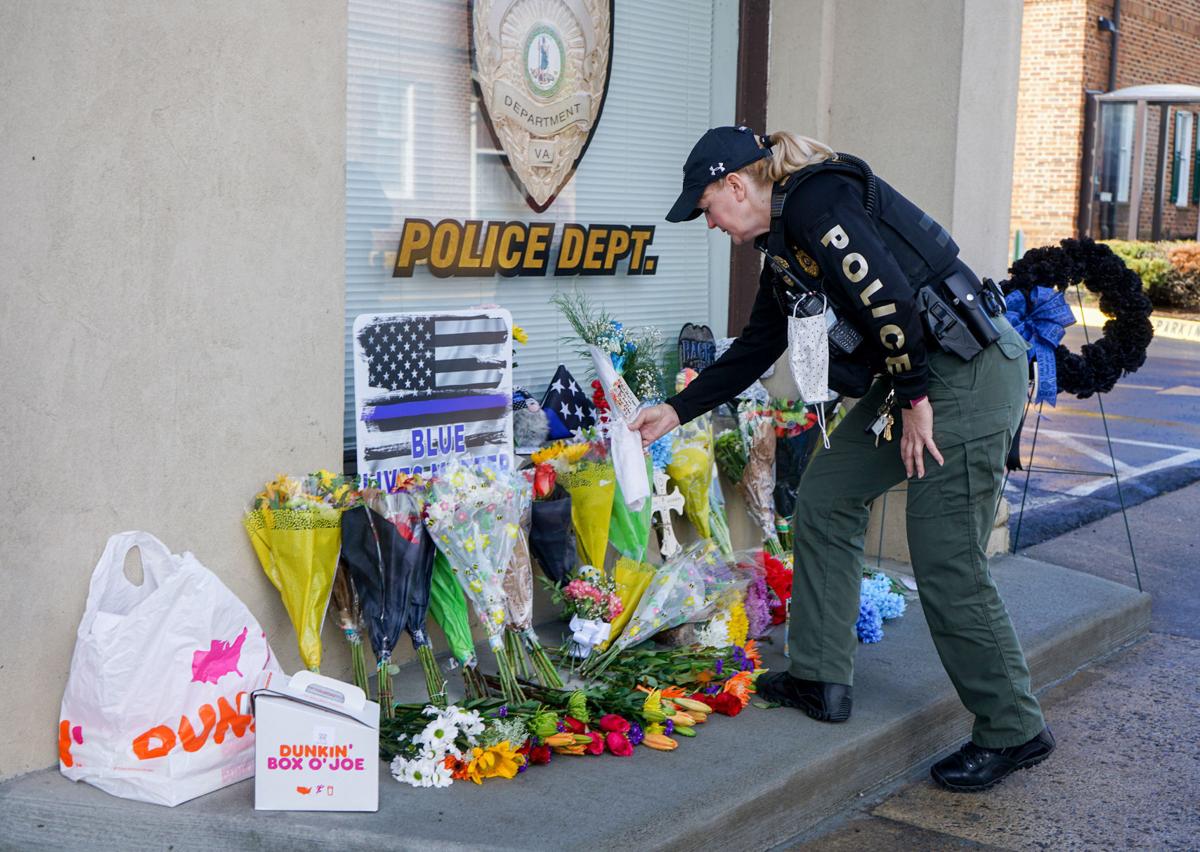 Elkton Police Sgt. Lynette Campbell places a bouquet of blue roses outside the Stanley Police Department on Saturday in memory of officer Dominic “Nick” Winum, who died in the line of duty Friday. 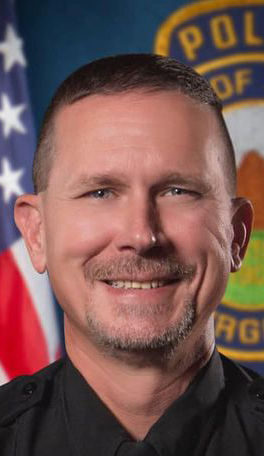 The day after five-year department veteran Dominic “Nick” Wimum, 48, was killed in the line of duty during a Friday afternoon traffic stop, this small town of less than 2,000 residents tucked against the foothills of the Blue Ridge Mountains mourned. Joining it were officers from the tight-knight Shenandoah Valley law-enforcement community and across the commonwealth.

“It’s hard to believe,” Campbell said. “I didn’t think I could cry anymore.”

According to the Virginia State Police, Winum stopped the suspect, identified as Dakota G. Richards, 29, of Stanley, in the 600 block of Judy Lane on Friday. Before Winum exited his patrol car, the driver got out of his vehicle and opened fire at approximately 3:15 p.m., according to police. Winum died at the scene.

According to the VSP, law enforcement personnel responded to the scene and assisted with tracking Richards, who fled into nearby woods. He was later located hiding in a barn in the 700 block of Marksville Road. There, Richards made a threatening movement and was shot by Page County Sheriff’s Deputies, police say. Richards died of his injuries.

VSP is investigating the incident.

The following day was filled with grief and pain in the town located roughly 40 miles from Harrisonburg.

“There was no better man,” Campbell said after dropping off blue roses outside the Stanley Police Station.

The roses were tied together with white ribbon, and a card was stapled on tissue paper.

“RIP Nick, we will never forget you! Love, your brothers and sister at Elkton PD.”

For hours, people dropped off bouquets of flowers, cards and “Blue Lives Matter” signs in remembrance of Winum. His badge number, 202, were placed on signs in the town.

Boxes of Dunkin’ donuts courtesy of the Chesterfield County Police Department and a tub of Edy’s Slow Churned Vanilla Ice Cream — two of Winum’s favorites according to a close friend — were set on the steps outside the police department.

Before noon, one visitor taped a Virginia State Police patch to the window of the Stanley Police Department. It was Virginia State Trooper Brandon Tester, who received his field training from Winum when he was with the VSP.

“I was very close with him,” he said.

Tester stood on the edge of the sidewalk for several minutes in silence. Like many, he found it difficult not to get emotional when seeing the stacks of flowers get higher as each person paid their respects.

Tester wasn’t only someone who worked with Winum, but a neighbor and family friend.

“He was a really great guy and a great officer,” he said.

Tester, who said he was on his way to visit Winum’s family, said the former Virginia State Police Trooper was very proactive in policing and treated everyone with respect as if they were a fellow officer. He said taping the patch, which Winum wore on his sleeve for 10 years before joining the Stanley Police Department in 2016, to the window was a fitting honor for a “good guy and a good officer.”

“He will be missed,” Tester said.

Stanley Police Chief Ryan Dean visited the memorial briefly, but expressed wishes not to be interviewed. In a statement shared on the town’s Facebook page Friday, Dean said, “Since joining our department in 2016, he proudly served and protected the Stanley community. I know the Stanley and Page County community are keeping Nick and his family in their prayers during this most difficult and tragic time.”

The Page County Sheriff’s Office also issued a statement on its Facebook page: “We have no words. Please pray for the family of our fallen brother, the Stanley Police Department, and our law enforcement family.”

Nearly 24 hours after the fatal incident, a GoFundMe page was started to help raise funds to cover Winum’s funeral expenses. As of Saturday evening, more than $16,000 had been raised.

Elected officials shared their condolences on various social media platforms and asked for prayers to the community they represent.

“My heart aches for the family of Officer Nick Winum, who was tragically killed in the line of duty yesterday,” said Sen. Mark Obenshain, R-Rockingham, on Twitter Saturday. “He was a faithful public servant.”

The show of support was not lost on Tester.

“It’s a good feeling to see all of this,” Tester said. “It’s humbling.”