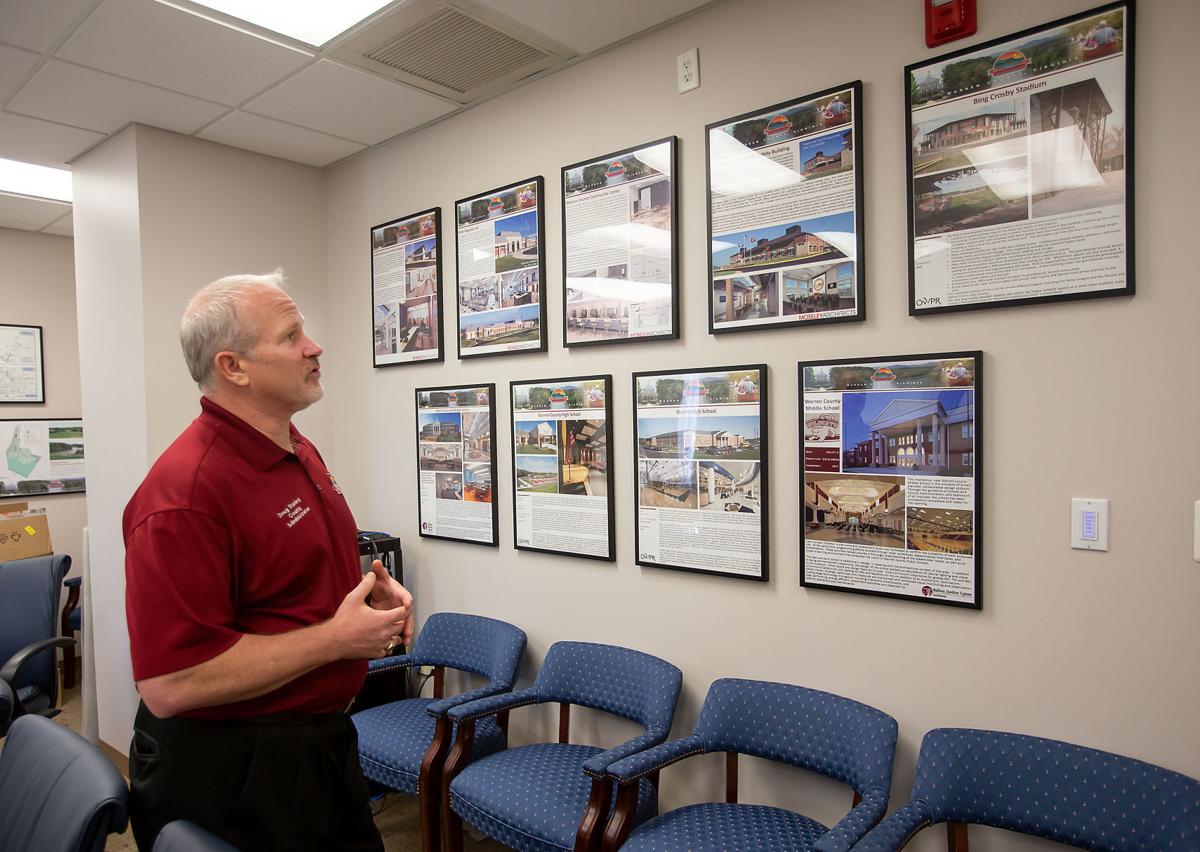 Doug Stanley looks over framed images in a conference room of several projects that the county completed under his tenure as county administrator. Those projects include the construction of two new high schools, Bing Crosby Stadium, the public safety building, the renovation of the county’s two middle schools and the replacement of five bridges, including the North and South Fork river bridges north of town. 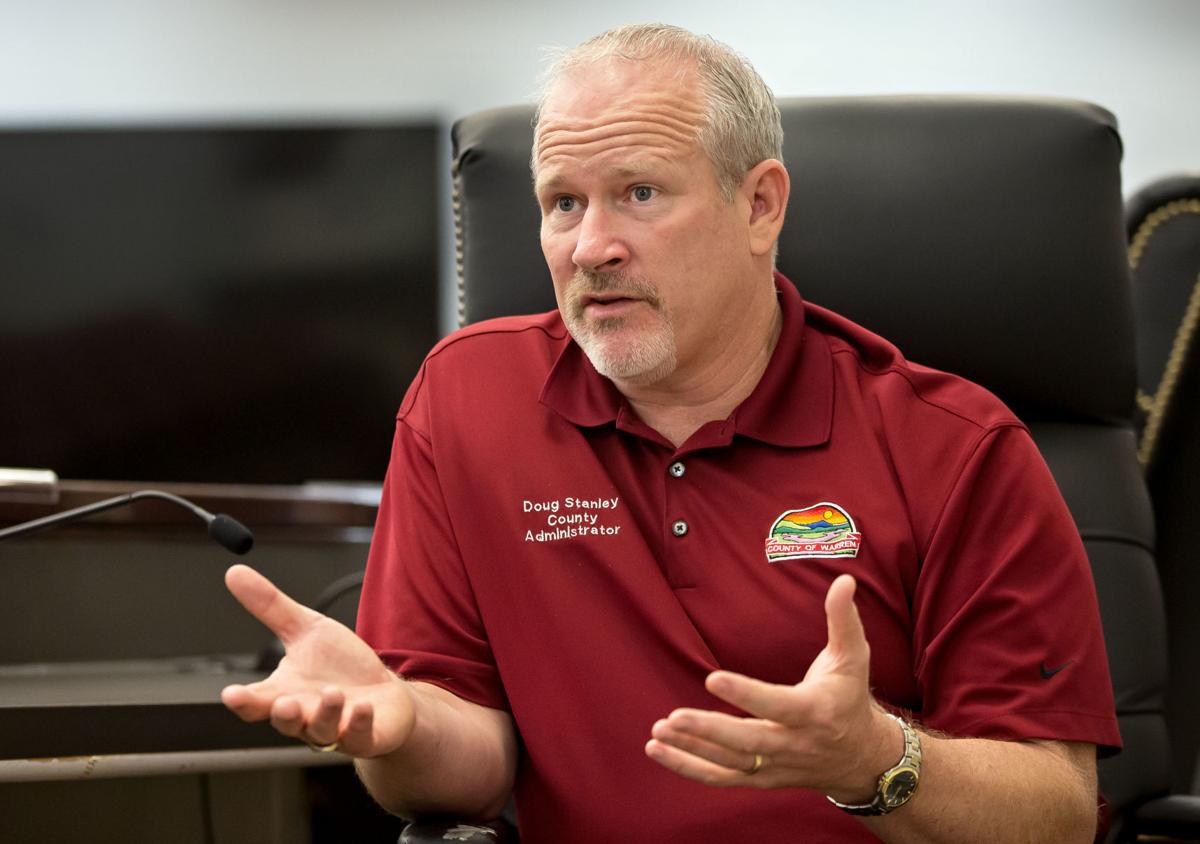 Doug Stanley looks over framed images in a conference room of several projects that the county completed under his tenure as county administrator. Those projects include the construction of two new high schools, Bing Crosby Stadium, the public safety building, the renovation of the county’s two middle schools and the replacement of five bridges, including the North and South Fork river bridges north of town.

FRONT ROYAL – After serving as county administrator for 20 years, Doug Stanley exited his office for the final time last week after the Board of Supervisors requested his resignation early in July.

Stanley’s career with the county began in December 1994, when he was 25 and hired as a zoning administrator. Two years later, he became planning director and in 2000 was named county administrator, one of four individuals to hold the title.

In an ideal world, Stanley said he would have retired here but “this provides an excellent opportunity for me to look at other options out there.” He added that “the reality of the job” is that “boards come in and sometimes they want change.”

Stanley said he has about 15 years “left in the tank” and he would “love to go to another community and have the opportunity to make a difference, make a difference like the way I think I’ve been able to do here.”

Above all, Stanley said he is most proud of addressing school-related issues, noting the 2007 opening of Skyline High School and renovation of Warren County High School.

“That was a great day for this community and I think, still to me, is maybe the pinnacle…seeing the impact that’s had on our community and the kids in our school system. I think today, with all the facilities, kids are proud to say they’re from Warren County and I think in the past they didn’t see the investment in public education,” he said.

In the mid-1990s, Stanley said most residents shopped in Winchester and “it’s fantastic that we have those shopping opportunities here in our community now so the tax dollars are spent here.” He added that his proudest planning achievement is ensuring that the development represented the historic architectural characteristics the community desired.

Stanley noted that along with Avtex’s development in the 1930s and 40s came a huge infusion of money into the community that facilitated construction of various facilities, which had “worn out by the late 90s.”

“What we’ve really been doing for the last 20 years is upgrading and replacing that infrastructure. And I think this community is poised to take off and be successful into the next quarter-century because of the investment that various Board of Supervisors and the state has made,” he said.

Another point of pride Stanley said is the county’s “fantastic” staff, many of whom, like him, have received promotions. With the staff and Interim County Administrator Ed Daley, Stanley said the county is in good hands.

“The staff and community and the board are fortunate to have somebody of Ed’s character and caliber here for me to hand the baton off to,” Stanley said.

While the job had its highs, Stanley said the alleged embezzlement within the Front Royal-Warren County Economic Development Authority made the last year the most challenging of his tenure. While the recent past was difficult, Stanley said he appreciates “the opportunity to have been around this long to help work on cleaning it up and addressing the issues and providing stability for staff.”

“This community, over the last year-and-a-half, has lost a tremendous amount of leadership…We’ve got three new board members, you got a new sheriff, a new commonwealth attorney, a new clerk of court, new town manager, new school superintendent. Quite a bit of change-over and I feel fortunate that I’ve been able to be here and help the community through that transition,” he said.

Asked if he had any regrets related to the EDA, Stanley replied “we wish we knew what we know now back then.”

Stanley added he is glad the supervisors commissioned a forensic audit that “helped ultimately uncover what had happened at the EDA and has allowed us to move forward with trying to clean up the mess and hold those who were involved responsible.”

While Stanley has received his fair share of criticism, some residents voiced their support during his last supervisors meeting.

Former Supervisors Chairman Dan Murray criticized the supervisors’ decision, saying Stanley is among “the best of the best.” Murray said he discussed the matter with fellow former supervisor Richard Traczyk, who agrees with the sentiment “that it’s a shame to pay back election promises this way having not even worked with [Stanley] for a full year.” He added that Stanley is “a cornerstone that’s not appreciated.”

“We are losing so much institutional knowledge that you don’t realize what we’re losing,” Murray said.

Tony Carter, a supervisor since 2002, stated via email that Stanley "served the community well for the past 25 years, always looking for ways to better Warren County."

"I wish him well in his future endeavors. I know he will do well," Carter stated.

Royal Cinema owner Rick Novak thanked Stanley, saying that a lot of great things were accomplished during his tenure and that he “will be missed.”

“What we’ve accomplished in this county in that time period, through some of your efforts and a lot of other people’s efforts, is amazing,” Novak said. “Warren County, even the EDA, believe it or not, was the envy of the state for many years with all the things that we got accomplished. And Doug, you were a huge part of that,” Novak said.

Resident Alan Weimer agreed with Murray, saying Stanley is “the best of the best” and “you’re gonna do well, you’re gonna get through this thing.”

What is next, Stanley said, is “to be determined.”

With a daughter having graduated from Skyline High School on Saturday and a middle school-aged son, Stanley said “it’s certainly an opportune time for us to take a look at our options and see what lies ahead in the next chapter of our lives.”

“I wish the community the best moving forward. We’ve sincerely appreciated the opportunity to be a part of it,” he said.

Having spent half of his life in Warren County, Stanley said “when I go back to my parents, it doesn’t feel like I’m going home” and “this is my hometown now.”

“There’s some people in this profession, every three to four years, they’re looking to move from one community to the next. That’s not me, I wanted to go somewhere and make a difference, and I think I’ve been able to do that here. So part of me will always be in Warren County,” he said.