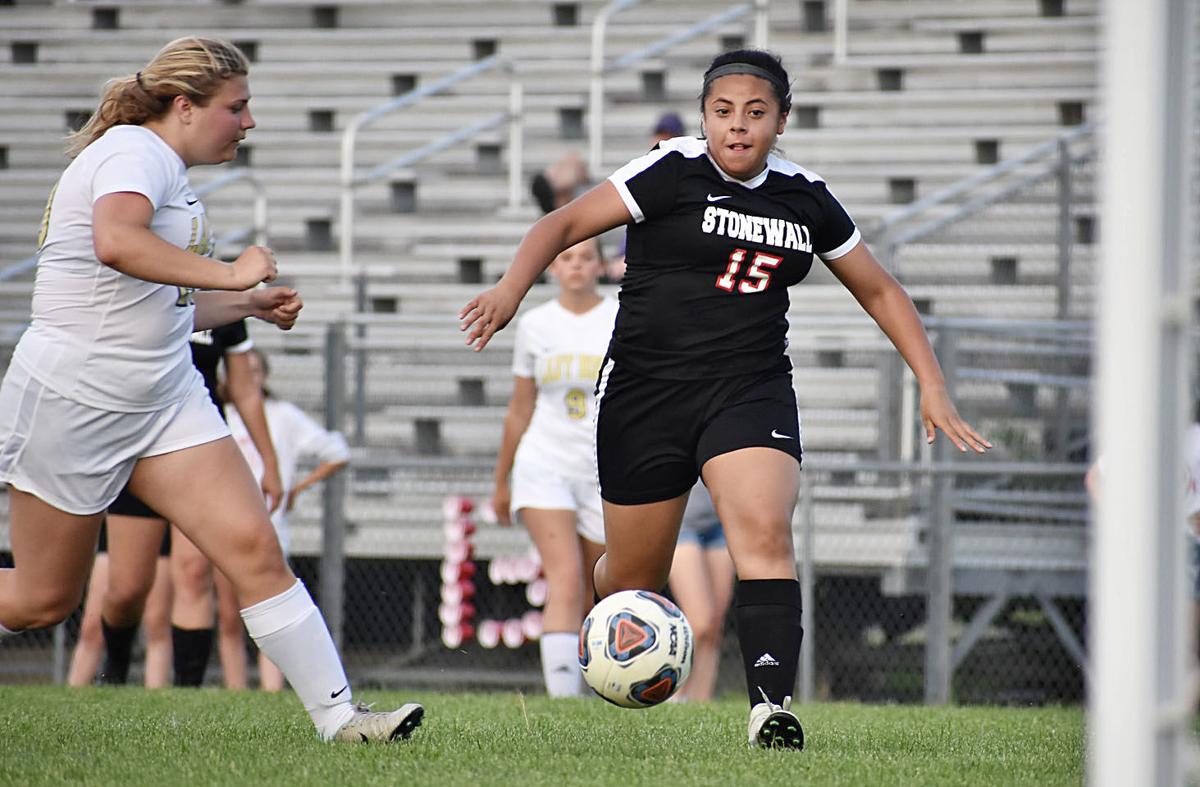 Stonewall Jackson’s Jannine Nunez-Vargas moves the ball down the field in a game last year. She was a big part of the team’s defense last year. 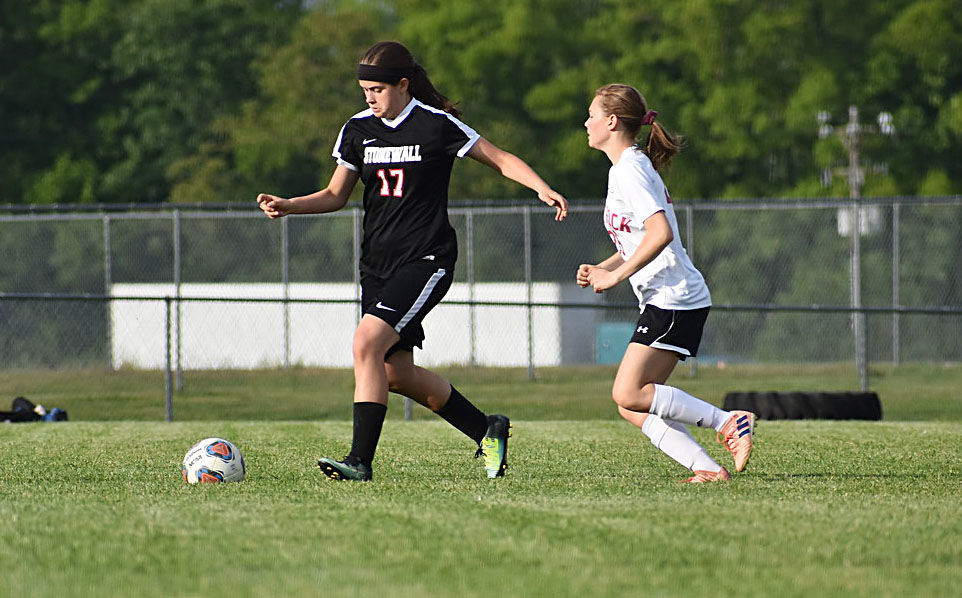 Stonewall Jackson’s Chloe Monroe maneuvers the ball during a game last season. Monroe is one of three seniors on a team that won the Shenandoah and Region 1B titles last year.

Stonewall Jackson’s Jannine Nunez-Vargas moves the ball down the field in a game last year. She was a big part of the team’s defense last year.

Stonewall Jackson’s Chloe Monroe maneuvers the ball during a game last season. Monroe is one of three seniors on a team that won the Shenandoah and Region 1B titles last year.

The pair, along with Linda Bonilla, were the team’s only seniors this year. Stonewall Jackson coach Ginny Dellinger said that Monroe made a big leap over the last year due to her hard work.

Monroe had to have surgery before her sophomore season and was still recovering from it during soccer and then rolled her ankle and had to miss several games due to the injury. Dellinger said the dedication Monroe had after that season was amazing.

“Her sophomore year I know was a big disappointment to her, but it’s what she did with that, it that’s noticeable to me,” Dellinger said of Monroe. “She went home from that season and completely changed so much about her life. She worked hard on her health. She worked on her nutrition. She worked on her fitness, which had never been a strong suit for her. She worked on her skills, and she came back last year just a changed player and had a really great year for us.”

Monroe finished last season with seven goals and three assists for the Generals, who were the Class 1 state runner-up.

“I definitely improved my conditioning after sophomore year,” Monroe said. “I lost a lot of weight, and I decided to get back in shape and that really helped improve my game. I changed my speed and positioning. I used to play defense, and now I’m moving up toward midfield and forward. So that’s definitely a change.”

Monroe said she’s had a lot of great memories from playing soccer at Stonewall Jackson.

“I guess the first memory was definitely last season being state runners-up with our team,” she said. “That was definitely well-needed for us, for working so hard every season and bringing a new title for Stonewall. Then probably my first game on varsity is another big memory. Just finally being able to play for Stonewall at (the varsity) level, and being able to play with my teammates and form all the memories and friendships that came along with it.”

Monroe said that her most memorable goal came in eighth grade. She scored the game-winning goal in the junior varsity team’s only victory of the season.

Perhaps her biggest goal came last year as she scored a penalty kick during the penalty shootout in the Class 1 state final against Auburn.

Monroe said it’s a great feeling to know how far the Generals made it last year.

“Just how hard we worked together and how determined we were to get to that spot was great,” Monroe said. “Unfortunately, we couldn’t come out on top. But I’d say state runner-up wasn’t too bad for how hard we worked.”

In the offseason, Monroe worked hard on her game and could often be found at Stonewall Jackson working out on her own in the summer heat.

Dellinger said Monroe was named captain this season and certainly deserved it.

“The biggest thing that people were saying was the biggest reason that they nominated her for captain was, because of how much she cared about the team,” Dellinger said. “And how much time and effort she put into making herself better to support the team. So I definitely was looking for her to be a leader on the team this year.”

Monroe said she was honored to be named captain.

Nunez-Vargas transferred last season from Broadway, but said she fit right in with the team and enjoyed her time at Stonewall Jackson.

Dellinger said Nunez-Vargas actually played against the Generals’ travel team, so she knew who she was before she came to Stonewall Jackson.

Dellinger said she was happy when she found she was going to have Nunez-Vargas on the team and described her as being like a “gift” to the team.

“I was really excited because I knew that she played defense, and I’m a strong defense coach,” Dellinger said. “I knew that she would be a good addition at outside back on our defense. She’s really quick but has a nice, nice little dribbling touch. So I was able to put her back on defense as another defender.”

Nunez-Vargas had one goal and three assists last season for the Generals.

She said one of her favorite memories was scoring her first goal in a regional victory over Altavista.

Nunez-Vargas said that being part of the team that went to the Class 1 state final was something she won’t forget.

“At first it didn’t feel real,” she said. “I was like is this actually happening? Even if we didn’t win, we still made history. I’m actually proud of the team that we made it that far. Some of us had our doubts but we all worked hard and we worked as a team no matter what and we always cheered each other on.”

Nunez-Vargas played a big role in convincing Bonilla to come out for the team this season.

“She would tell me, ‘I want to be on the team,’” Nunez-Vargas said of Bonilla. “And I said ‘you should go for it. You’ll make it. I can help you. I’ll be there if you need any help.’ She would be nervous at practice and I told her ‘It’s OK to be like that. It’s your first time playing with the team.’”

Dellinger said she’s sad for the seniors that they didn’t get to have their senior soccer season due to the COVID-19 pandemic, but she’s glad that they were part of the team.

Nunez-Vargas said that she is thinking about going to Lord Fairfax Community College next year with music as her major.

Monroe said she is undecided about college but doesn’t plan on playing soccer at the next level. She said she hopes to play with Stonewall Jackson’s travel soccer team the next year or two, which would mean she’ll get another opportunity to play her teammates.

“I might just do the last season or two that I can do with travel and maybe indoor with my team,” Monroe said. “It’s definitely appreciated after what happened (to the high school season). I’m pretty sure (the travel team) is a (19-and-under) team, so I think technically I can still play for two more seasons.”