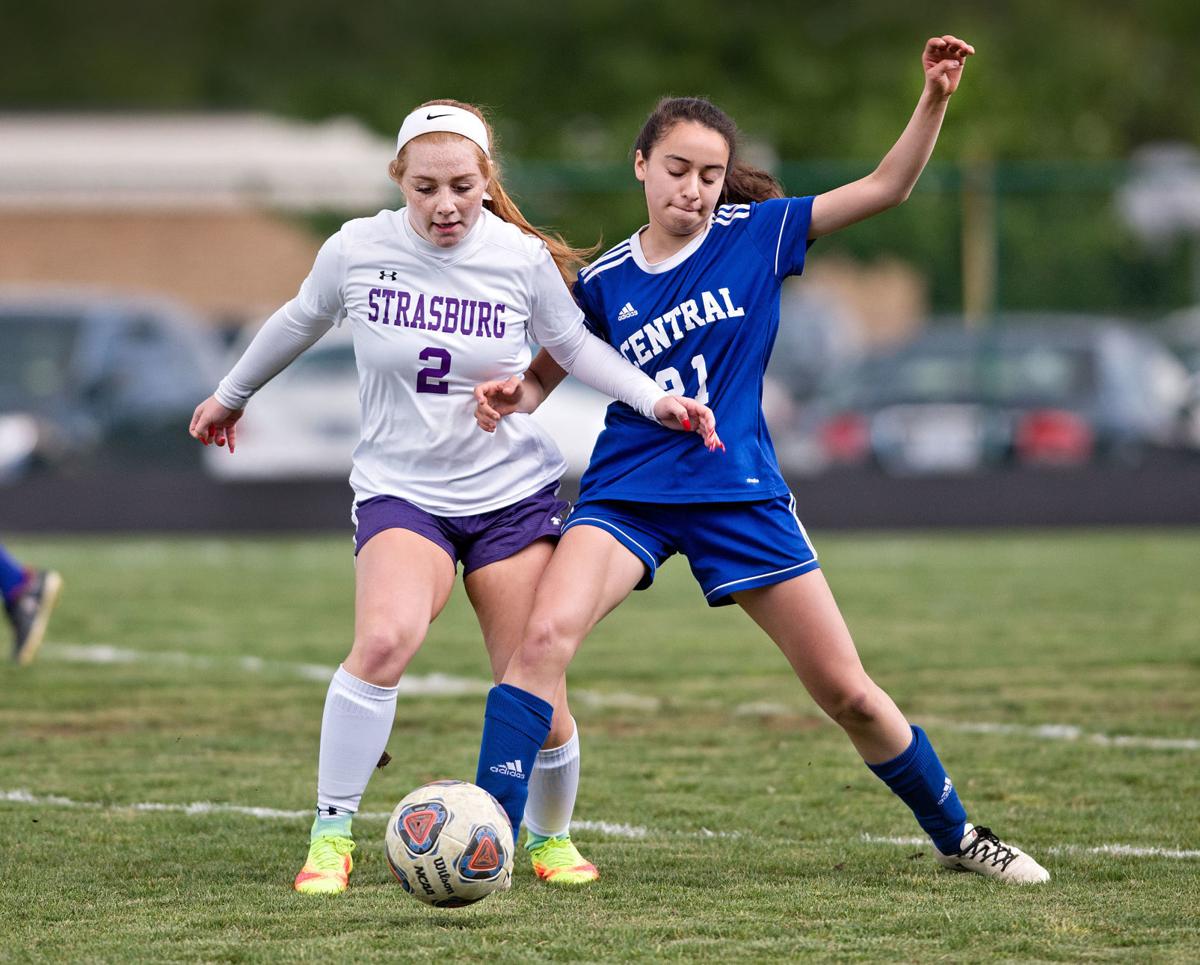 Strasburg’s Hannah Peer and Central’s Jaclyn Cardoso fight for possession of the ball during a game last year. Peer is one of seven seniors who have helped turn Strasburg’s program around. 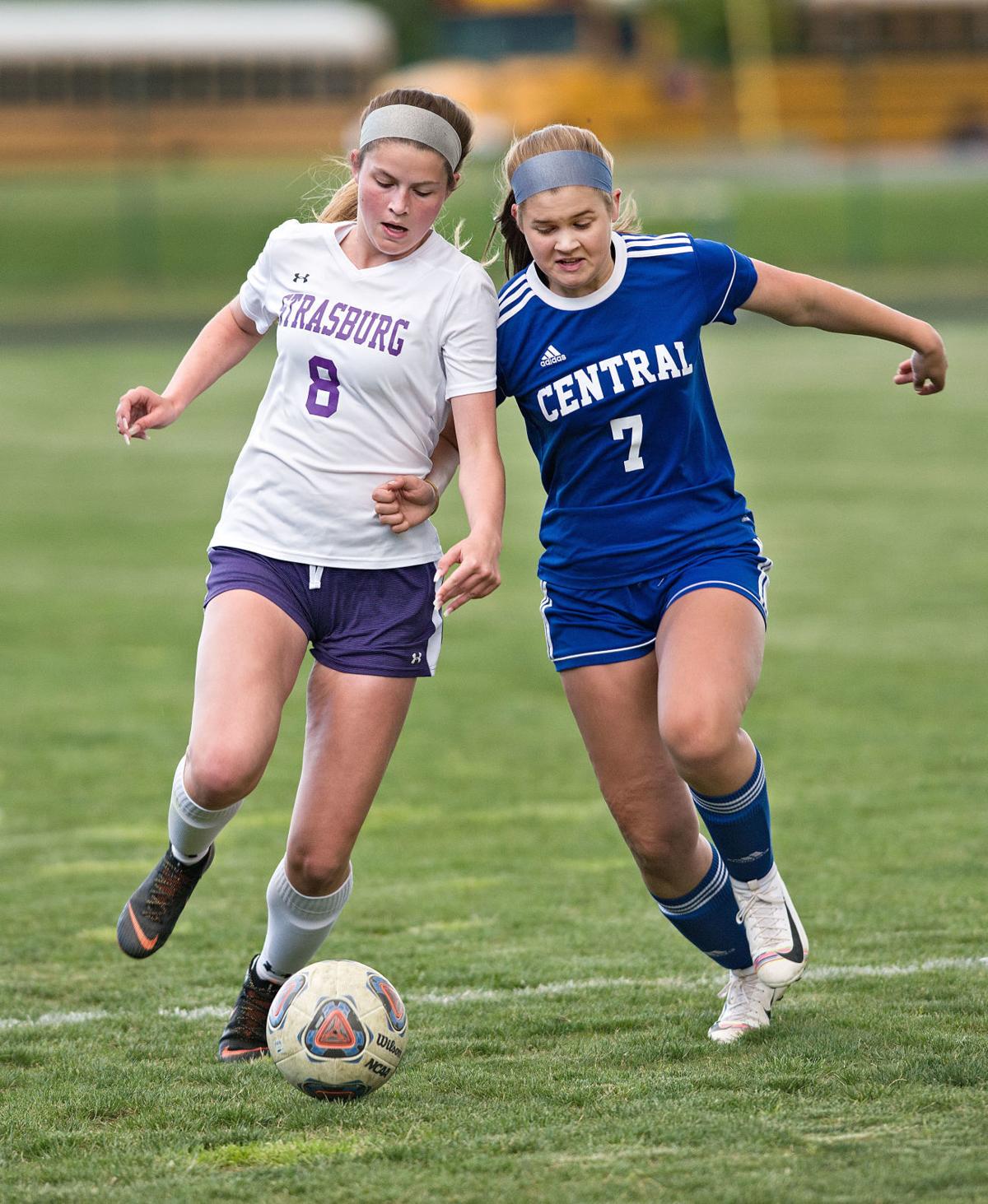 Strasburg’s Morgan Bible and Juliana Baker chase down a ball during a game last year. Bible, a senior, was one of Strasburg’s top returners this season. 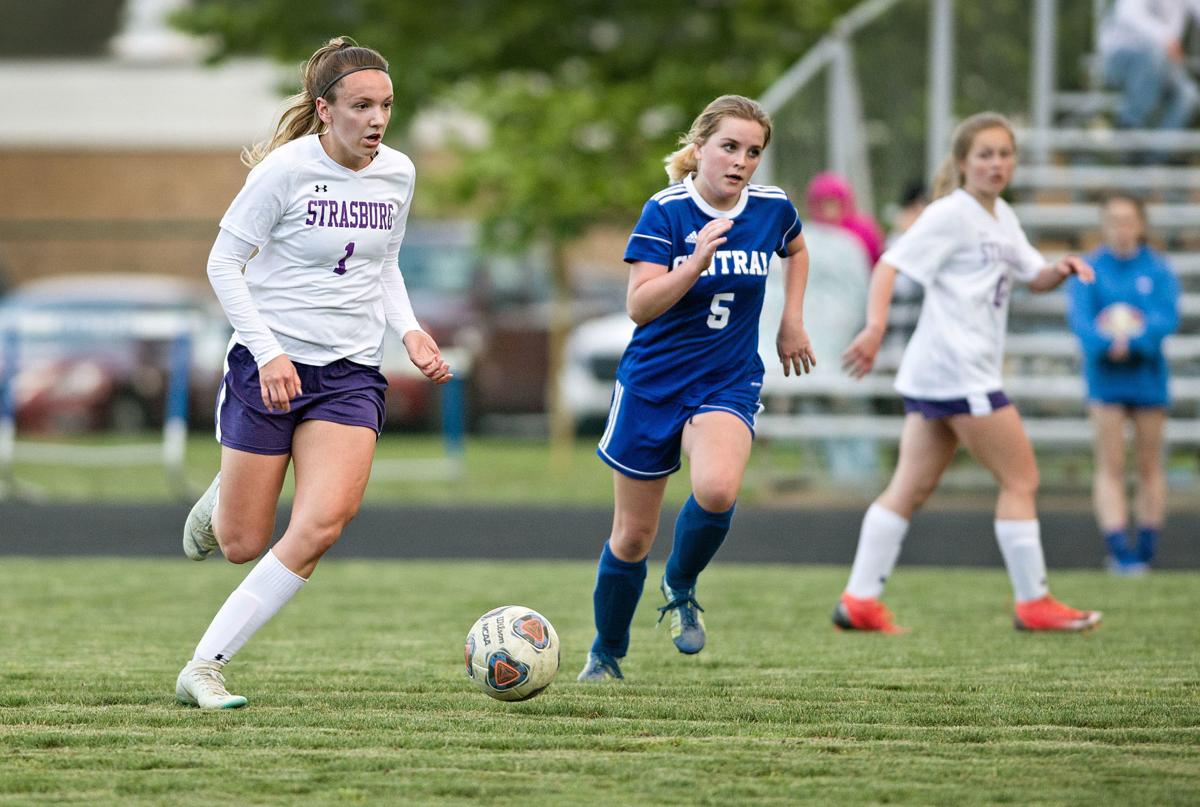 Strasburg’s Karly Colcombe moves the ball downfield as Central’s Caroline Holsinger runs to catch up during a game last year. Colcombe was one of seven returning seniors who helped the program improve.

Strasburg’s Hannah Peer and Central’s Jaclyn Cardoso fight for possession of the ball during a game last year. Peer is one of seven seniors who have helped turn Strasburg’s program around.

Strasburg’s Morgan Bible and Juliana Baker chase down a ball during a game last year. Bible, a senior, was one of Strasburg’s top returners this season.

Strasburg’s Karly Colcombe moves the ball downfield as Central’s Caroline Holsinger runs to catch up during a game last year. Colcombe was one of seven returning seniors who helped the program improve.

“This group has been such a driving source in the improvement of the program as a whole,” Strasburg coach Kayla Allen said. “Of the seven, six of them have played since they were in eighth grade with us. They’ve played together for years – since they were little. They joined our (junior varsity) program when I was still the JV coach and they’ve made that transition with me from when I was JV coach to being head (varsity) coach. So I’ve coached these girls for five years. So we’ve all grown really close. They were always close as a group and every year we got stronger and stronger, because they came back knowing exactly what my style was and what I wanted from them.

“I knew what they could give me. I knew the potential that they had. Every year I’ve been able to see, everybody’s been able to see that Strasburg soccer just kept getting better and better because we had this really great core group. And then we kept getting strong additions to it – and then this was supposed to be the year.”

The season only lasted for three weeks before being shut down and eventually canceled due to the COVID-19 pandemic.

Coffelt, who had three assists for the Rams last year, said that the group has always had a special bond.

“We’ve been playing together since we first started,” Coffelt said. “So it’s been fun starting with the same group and developing with them. I think we’re really close. I think just the team bonding, winning games has been fun.”

Allen said that Coffelt was one of the leaders on the team. Coffelt said that she enjoyed her leadership role on the soccer squad.

“I think I kind of grew into being a leader,” Coffelt said. “I think I led more by example than by telling people to do things.”

Peer said that her favorite position has always been at center forward.

“It’s the adrenaline for sure,” Peer said. “Even after you get that first goal – I’m just hungry for more. So that’s what keeps you going.”

“We went into overtime twice and Brittany (Coffelt) had a corner kick,” Peer said. “We had three seconds left and headed it in the corner. So that was for sure my favorite one.”

Bible said being around her teammates has been the best part of playing soccer for her.

“It’s just fun,” Bible said. “It’s somewhere you can go and not have to worry about anything. And being around all the people you like hanging out with and just have fun.”

Bible had four goals and three assists for the Rams last year. Bible said that her most memorable goal happened in eighth grade on the junior varsity team. The Rams beat state powerhouse George Mason, 1-0, and she scored the only goal.

Allen said that Mary Carter’s game has gotten stronger over the years.

“Mary Carter has been really beautiful to watch as she’s developed over the years,” Allen said. “She’s always played in the midfield. I had her at center the last couple of years and she’s one of those players that you need but isn’t always appreciated. Mary will make that pass, she makes the penetrating passes. She wins the ball in the middle and gets it back to us. She’s sort of that workhorse in the middle that isn’t always loved, but is such an important piece of everything.”

Allen said that Atchariyakornchai’s quickness helps her out on the soccer field.

“She’s played with me forever,” Allen said. “She wasn’t moved up to varsity until she was a sophomore. She is always on the defensive line. She works so hard on the field. She will track down any forward. She will push her way into anything. If it is a foot race with her and a forward they’re not scoring on us, she will track them down, she will get there.”

Allen said that Reynolds only started playing soccer as a sophomore, but learned quickly and worked hard.

“Olivia comes in every day with a great attitude,” Allen said. “She never lets anything bring her down. She works hard. She’s always there, but she’s never complaining. She is one of those forwards that we always wanted her to get her goal, because she works so hard. She’s always in the right place it just never quite worked out. But she is someone who worked very hard and never complained and that’s always nice to have on your team.”

Allen said that Colcombe, who had one goal and one assist for the Rams last year, made a position change last season and it paid big dividends for the Rams.

“Karly is another one that she had been a defender her whole life and I loved her back there,” Allen said. “But last year we started experimenting with her in the midfield, and it’s like she just became this whole new player. It was really great to see that, because I always thought she had it in her. But she’s always worried about whether or not she could run the midfield run. But she really got to show her knowledge of the game once I put her there. She was making those important passes.”

Even though the Rams didn’t get to have a senior season, Bible said it’s still a great feeling to know how much they helped the program grow.

“It’s actually pretty special, because I feel like we’re one of the better groups of girls soccer players to come through Strasburg,” she said. “And to be a part of that is special, because I feel like we’ve done more for the soccer program than a lot of other people have. It feels good to be part of something that you know you’re making history at Strasburg, when we were the best soccer team to ever come through.”