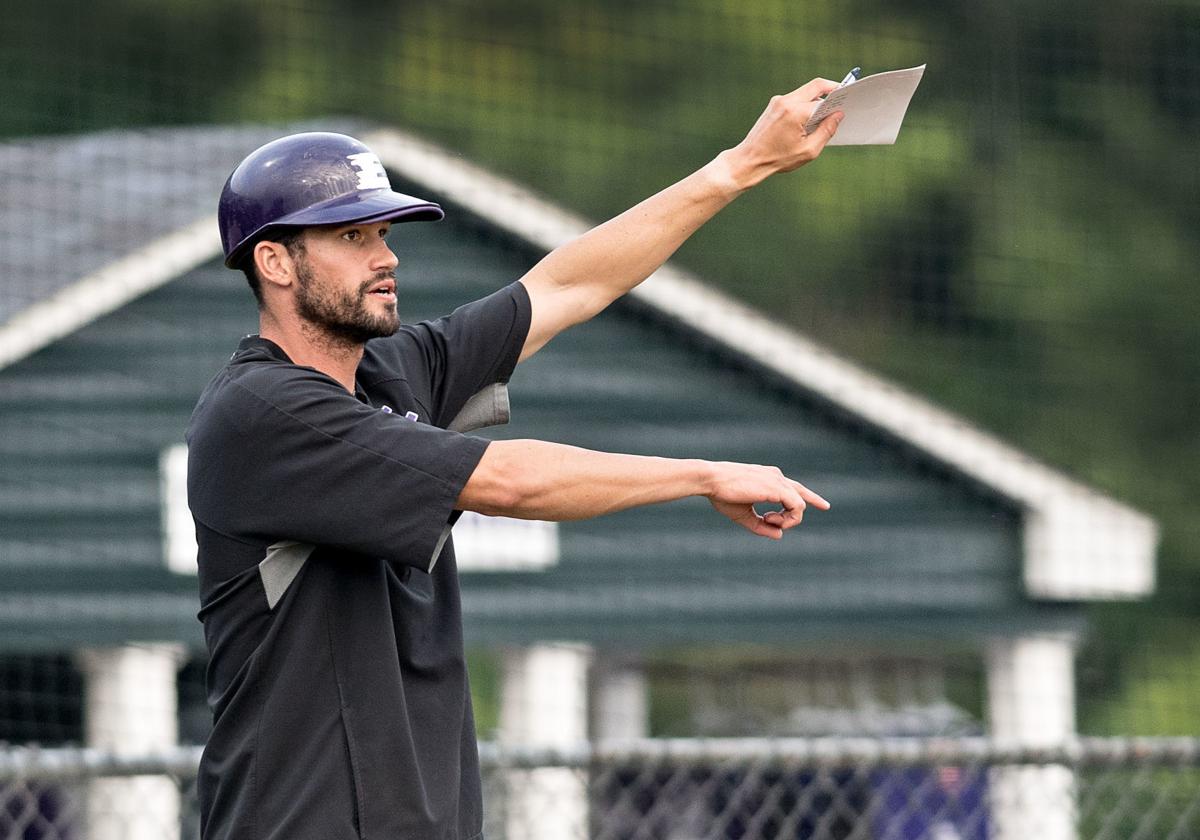 Strasburg head coach Brock Moss signals a base runner to third during the game Monday against Winchester at First Bank Park in Strasburg. Moss coached the North Division in Sunday’s VBL All-Star game. 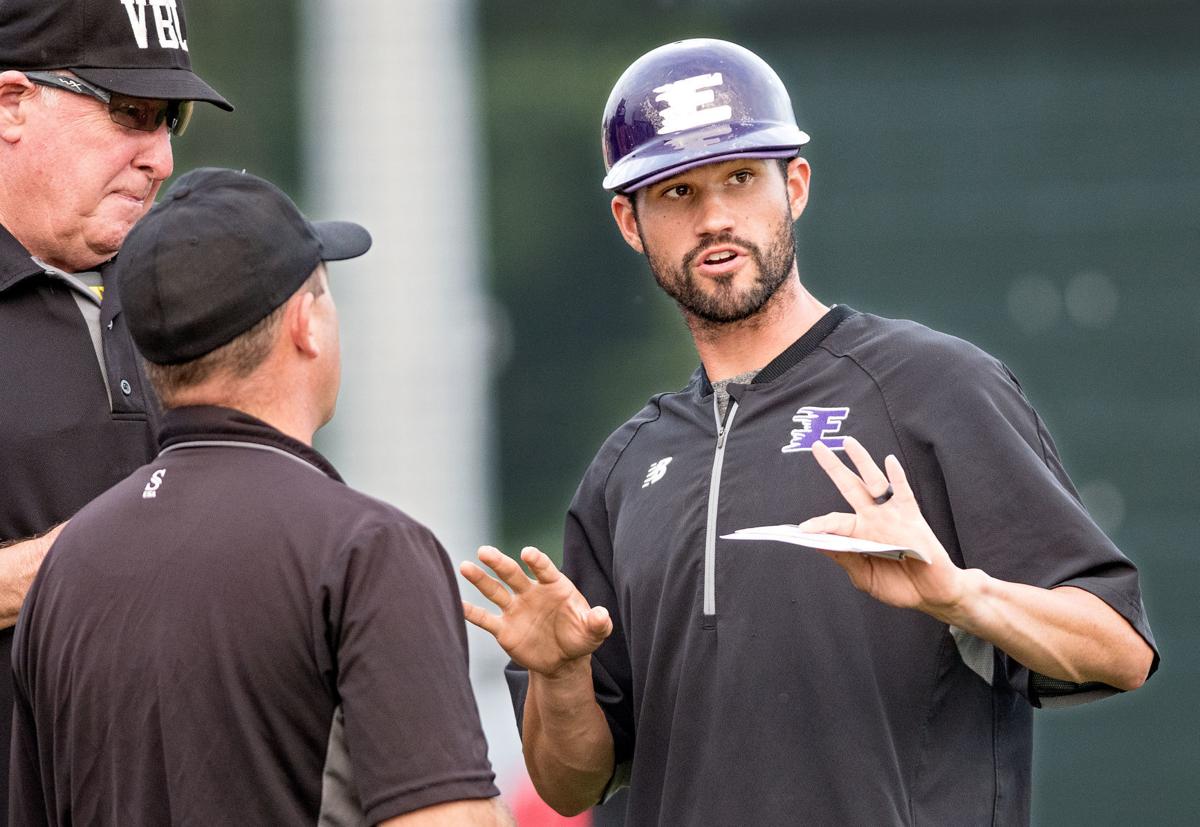 Strasburg head coach Brock Moss chats with umpires between innings during the game Monday against Winchester at First Bank Park in Strasburg.

Strasburg head coach Brock Moss signals a base runner to third during the game Monday against Winchester at First Bank Park in Strasburg. Moss coached the North Division in Sunday’s VBL All-Star game.

Strasburg head coach Brock Moss chats with umpires between innings during the game Monday against Winchester at First Bank Park in Strasburg.

STRASBURG — Strasburg Express head coach Brock Moss got to do a little extra coaching this past weekend as he was the head coach of the North Division team in the Valley Baseball League All-Star game on Sunday.

Moss was the head coach due to Strasburg being in first place in the division at the All-Star break. The South beat the North, 1-0, in a rain-shortened game at JMU’s Veterans Memorial Park in Harrisonburg. The game was stopped in the bottom of the fourth due to rain. Moss said it was a great experience for him.

“Outside of Mother Nature kind of ruining the party, it was fun,” Moss said on Monday afternoon. “We have a talented league. There’s talent all over. The (MLB) scouts, I think, were hopefully happy with what they saw in the few innings we got to play. But outside of Mother Nature, it was a good time. I’m definitely glad I got to be a part of it.”

The two teams combined for just one hit during the game, a single by Staunton’s Andrew Czech for the South.

Moss said it was nice interacting with some of the other coaches from the rest of the division, who served as assistant coaches. He said one of the biggest challenges was making the lineup for the game.

“You try to just do the best you can because obviously, you have everybody else’s guys that you’ve seen play,” Moss said. “You kind of know where they hit in their lineup. And you just try to mix and match the best you can to try to get everybody equal number of at-bats. And just try to get the guys that you feel has produced the most runs for the division across the different teams in the top of the order to hopefully try to get the scoring started as much as you can.”

ON THE BIG STAGE: The VBL All-Star game was televised nationally by ESPN for the first time in league history.

The game was originally supposed to air live on ESPNU, but a problem with the graphics forced the network to delay the broadcast. Moss said that from what he was told, they had the wrong graphics package and couldn’t get the right one there in time so they weren’t able to show the game live.

However, Moss said they were there and did tape the game and he was told they are supposed to air the game at a later date.

He said having ESPN there to tape the VBL All-Star game is a great thing for the league.

“It’s huge. Any time you’re getting national exposure like that, it opens up a world of wonders in terms of recruiting possibilities,” Moss said. “...Any (MLB) scout across America could flip the TV on and watch the game. It’s another way for those guys to build a report and formulate an opinion about potential guys to play professional baseball.”

Between two rainouts and a scheduled day off, the Express had three consecutive days off before playing on Saturday, a 7-3 loss to Woodstock. The Express were then off again for the All-Star game on Sunday but did return to action on Monday, a 9-0 win over Winchester.

“It’s been crazy,” Moss said. “We’ve had Mother Nature cancel a lot of games on us. But we’re just doing the best we can to try to keep the guys focused, stay as ready to play as we can. This tends to be the time in the summer anyway where you’re having that mental battle, that physical battle. Where guys are playing every day consecutively — four, five, seven days of time — those legs are getting heavy. It’s a grind if you’re not playing good. You’re away from home, away from everything you know. We’re just trying to keep the guys focused.”

Strasburg is 19-7 and has a five-game lead on second-place Woodstock in the North Division.

The Express have 16 games left in 16 days, although Moss said the season could be extended by a day if needed due to the weather. He said the biggest thing he worries about with so many games in so few days is the health of his players.

“Absolutely the number one thing is keeping guys healthy,” Moss said. “You’re trying to run guys out there as much as you can to keep them in tune with the game, keep them playing well, but not wear them out. It’s really tough for some of these guys that they’ve had 200 at-bats in the spring and then turn around have another 150 here. That puts a lot of those guys at 70, 80, 90 games played. And a lot of that some of those guys have never experienced. So that body will get a little tired. So we’re trying to do the best we can to keep all those guys healthy, and then obviously find that right mix that keeps us playing well that hopefully leads to wins.”