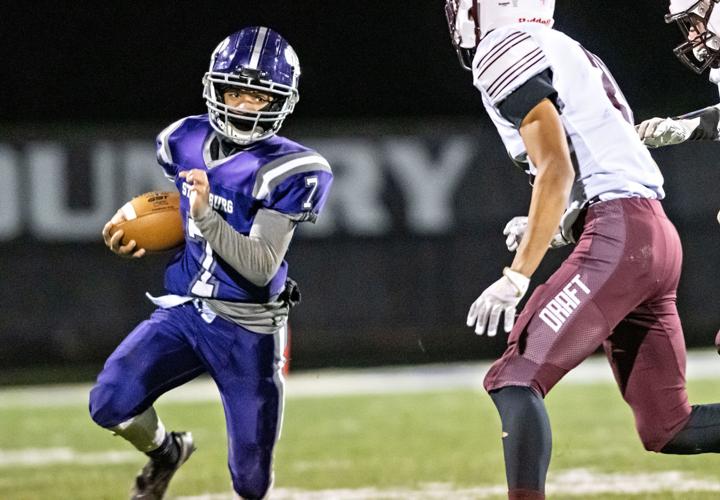 Strasburg’s Takhi Coates breaks to the outside as Stuarts Draft’s Christopher Watkins moves in to make a tackle during the Region 2B semifinals held Friday night in Strasburg. 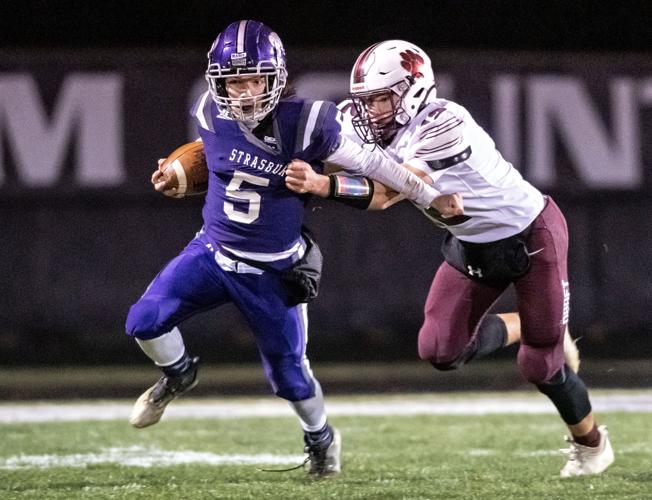 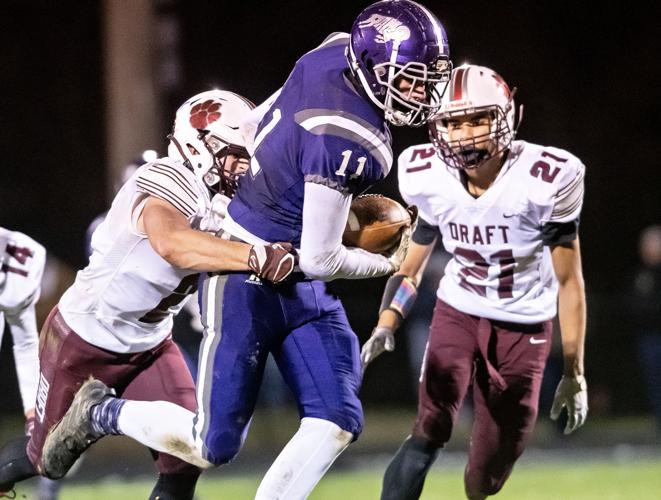 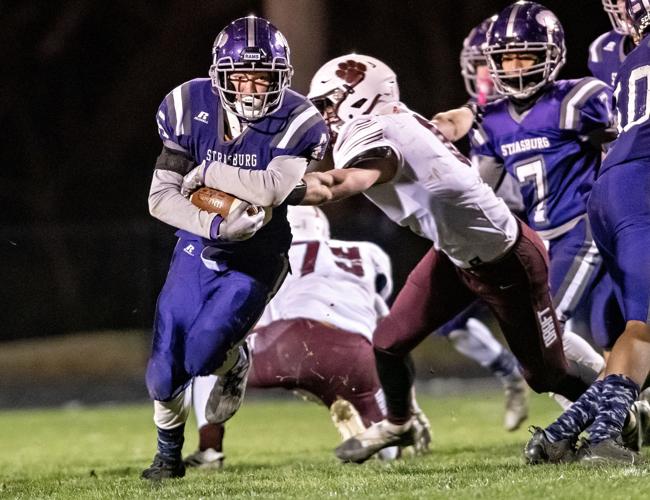 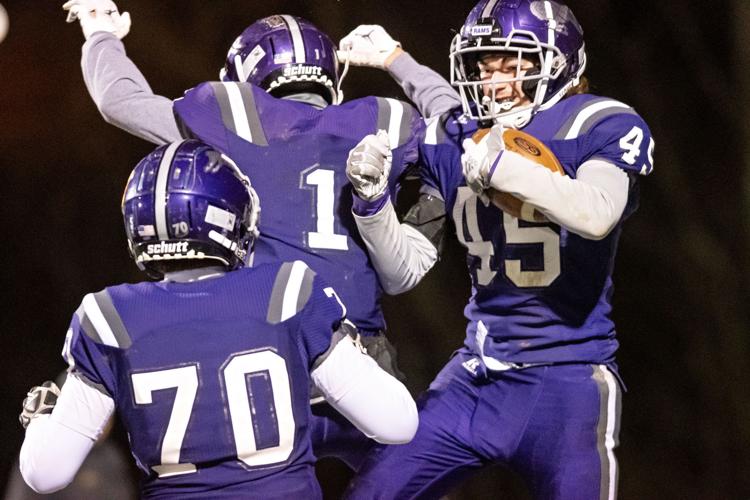 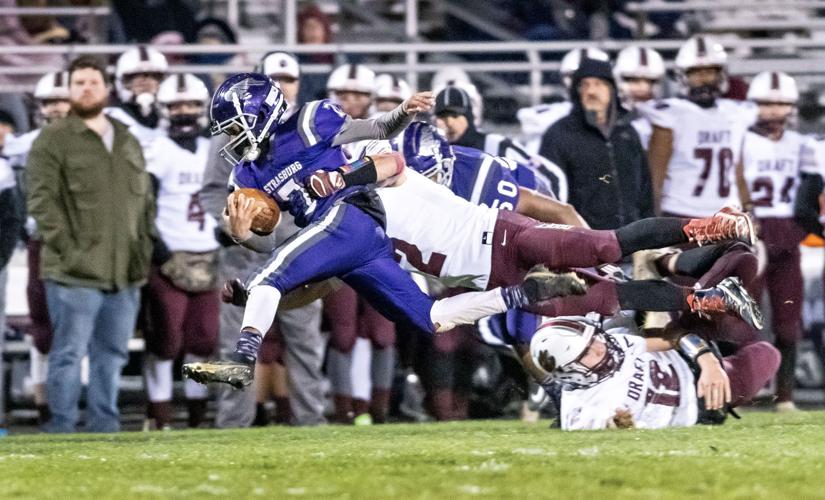 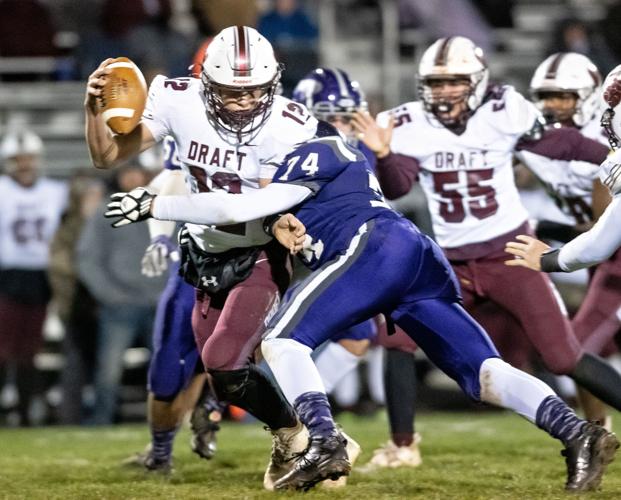 Strasburg’s Hutson Conrad prepares to drop Stuarts Draft quarterback Landon Graber for a loss during their game last week. The Rams host Central in the Region 2B final on Friday.

Strasburg’s Takhi Coates breaks to the outside as Stuarts Draft’s Christopher Watkins moves in to make a tackle during the Region 2B semifinals held Friday night in Strasburg.

Strasburg’s Hutson Conrad prepares to drop Stuarts Draft quarterback Landon Graber for a loss during their game last week. The Rams host Central in the Region 2B final on Friday.

STRASBURG -- Strasburg's offense didn't have the best start, but as usual the Rams' defense came up big on Friday night.

The top-seeded Rams overcame a slow start on offense and pulled out a 28-7 victory over fifth-seeded Stuarts Draft in the Region 2B football semifinals.

"Once we overcame the slow start, the first couple possessions, I think we started to turn things around," Strasburg head football coach Mark Roller said. "We started to play well. Certainly, it wasn't our best game, but we'll take the 'W.'"

A penalty hurt the Rams on their opening possession and forced a punt. Stuarts Draft took over at its own 48. After the Cougars picked up a first down, the Rams' defense held them to just one yard on the next three plays.

The Rams had to start at their 12 on their second possession and once again couldn't move the ball. Stuarts Draft was winning the field position battle and began its second drive at the Strasburg 45.

They were able to move the ball to the Strasburg 7. The Rams' defense forced Stuarts Draft into a 25-yard field goal attempt, but kicker Ethan Cyr missed it with 4:10 left in the opening quarter.

"We gave them the ball in some good field positions, and we were able to overcome that and get a stop," Roller said. "And fortunate they missed a field goal there when they got down in close. But overall, our defense did a good job keeping us in the game at that point."

The Rams (11-1) finally picked a first down on their next possession. Facing a fourth-and-1 from the Strasburg 29, Strasburg senior quarterback Ryan Roller kept the ball and ran six yards for a first down. However, the drive stalled after that, and the Rams were once again forced to punt.

Strasburg forced Stuarts Draft into a three-and-out on the ensuing possession and the Rams' offense finally showed some life.

The Rams went 65 yards on 10 plays. Facing fourth-and-20 from the 29, Ryan Roller connected with a wide-open Takhi Coates with 5:51 left in the first half for a 7-0 lead. It was the first of two fourth-down touchdowns by the two against the Cougars.

It's not the only game in which the duo has had success. The pair connected on a fourth-and-11 from the 20 for the game-winning touchdown two weeks ago against Shenandoah County rival Central.

After the Cougars had another three-and-out, the Rams needed 10 plays once again, this time to go 59 yards. It ended the same way as their previous drive. Facing fourth-and-10 from the Stuarts Draft 19, Ryan Roller threw a pass down the middle to Coates, a sophomore running back, for a 14-0 lead with 30 seconds left in the opening half.

"The second one Takhi caught was kind of just like we planned it," Mark Roller said. "(Ryan) did a good job of putting the ball where he could catch it. Those two are having a little chemistry right now. (Coates) does a good job with his body and moving around out there. He's fast, so it's hard for people to stay with him."

The Rams extended their lead to 21-0 early in the fourth quarter. Ryan Roller threw a short pass to senior running back Braden Stern who went down the sidelines for a 46-yard touchdown run with 11:11 left in the game.

Stern led the Rams rushing attack with 100 yards on 18 carries.

"I just had to do what I needed to do," Stern said. "It was either win or go home. I had to put it all out there on the field."

The Cougars (8-4) only touchdown came on defense. Stuarts Draft's Fannon Vance recovered a Strasburg fumble and returned it 30 yards for the touchdown to cut the deficit to 21-7 with 9:18 left.

Strasburg outgained Stuarts Draft 332-47. The Rams held the Cougars to 28 rushing yards on 16 carries. Ryan Roller threw for 130 yards on 7-of-14 passing with three touchdowns. Coates had two catches for 48 yards and two scores.

"Our defense did great," Stern said. "Our D-line, our linebackers, our secondary, everybody did great. We did all the things we were supposed to do, studying film all week -- everything worked out."

The Rams have now won 11 straight games. Their only loss was a forfeit to Skyline in the season-opener. They will host third-seeded Central on Nov. 25 in the Region 2B final with a Class 2 state berth on the line. The Rams beat the Falcons 22-17 on Nov. 4.

"It's going to be another tough game," Stern said. "We know how it goes with Central -- the rivalry there. We're going to have to either win or go home. It's great to be practicing over Thanksgiving. It's something you talk about all summer long and all through the season."