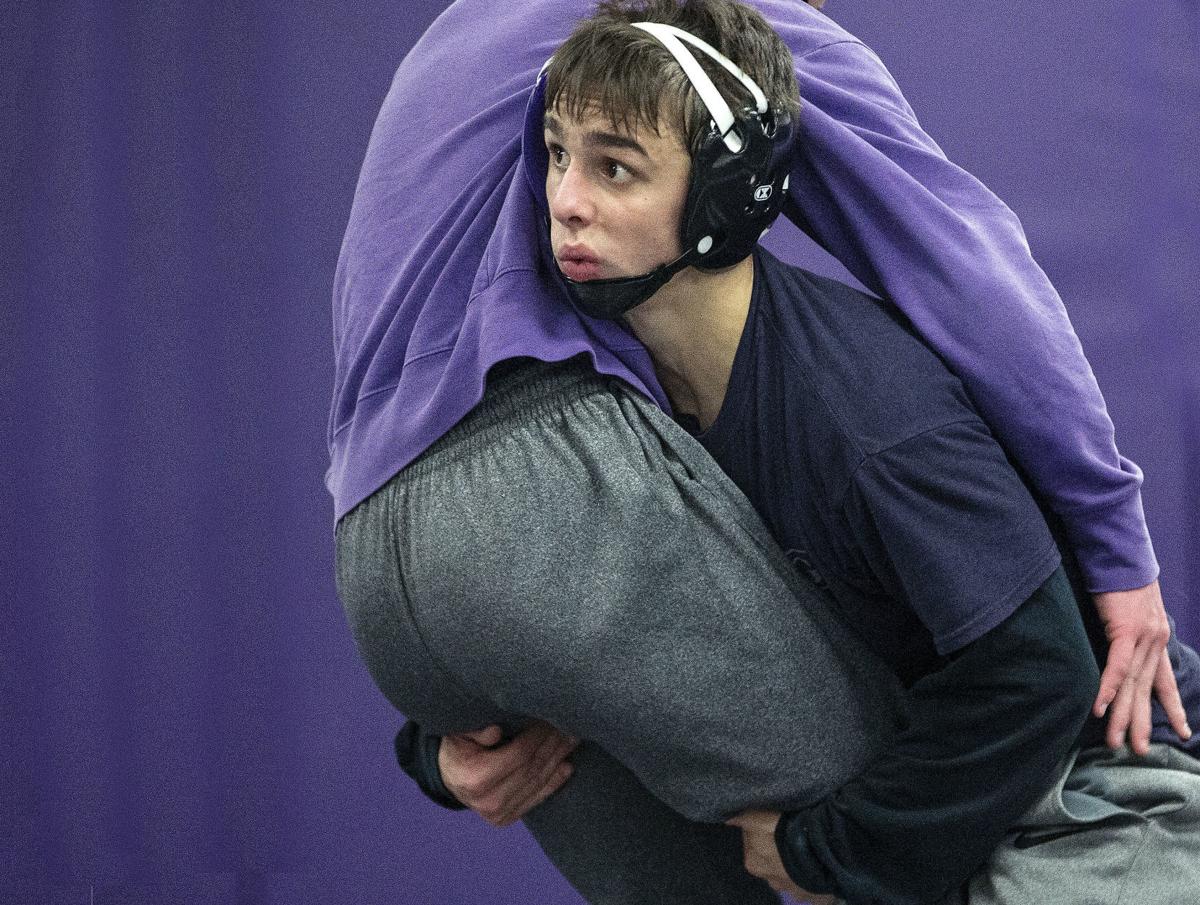 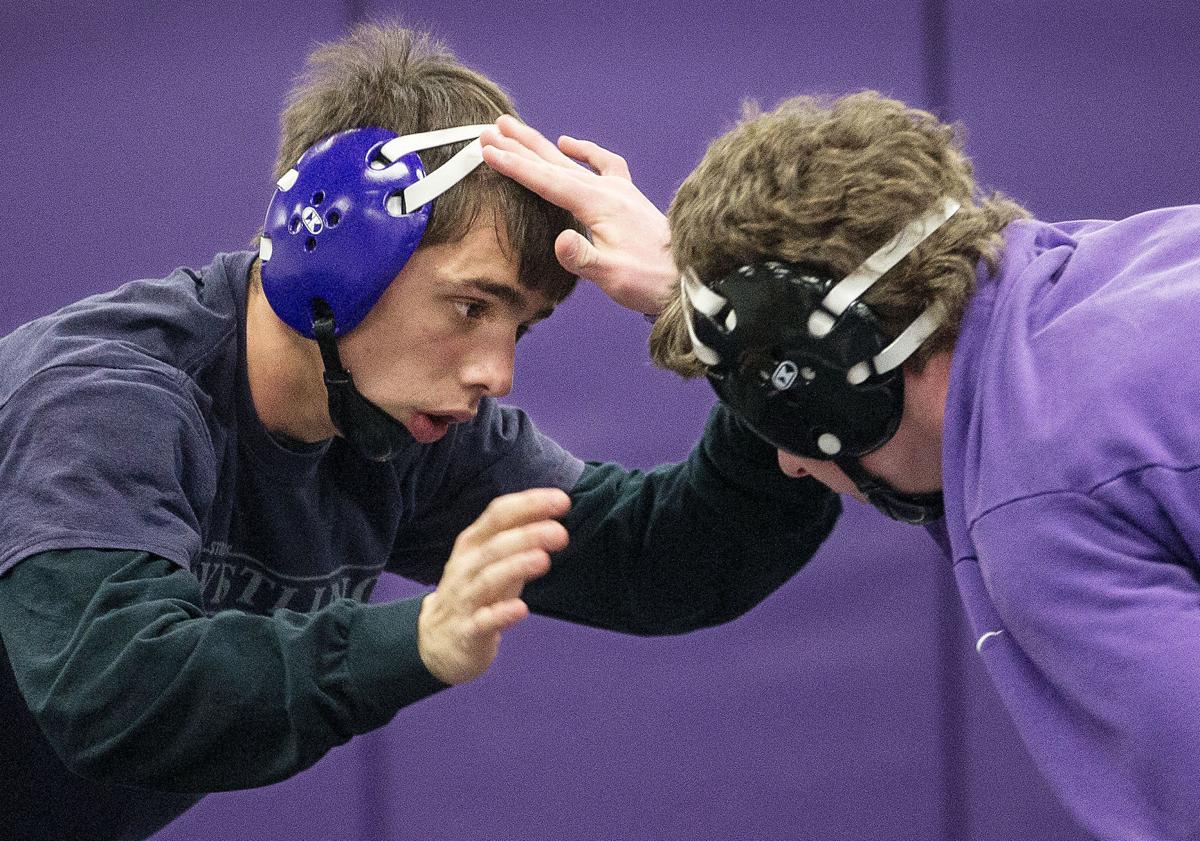 STRASBURG — It was supposed to be the year Peyton Stickles finally got over the hump.

Even while nursing a shoulder injury during an injury-riddled junior season in 2018-19, Stickles expected to win it all. With a trio of Bull Run District titles and two Region 2B championships to his name, a high school state championship medal was the last thing Stickles needed to complete the postseason trifecta.

He’d come tantalizingly close to winning that gold medal in his first two varsity seasons, reaching the Class 2 113-pound state title match as a freshman in 2017 and the 120-pound championship bout as a sophomore a year later. Stickles was pinned in the first period both times, and he came back as a junior ready to attempt another postseason run to the top of the podium.

The postseason jaunt started out well enough last season for Stickles, who won 132-pound titles in the Bull Run District and Region 2B tournaments to pile up the momentum heading into the Class 2 tournament. But in the state semifinal round in Salem, the shoulder injury that held Stickles out for the first month of the season and nagged him for the next six weeks took its final toll.

As Lebanon’s Ethyn Yates went to work initiating a power half nelson early in the second period, Stickles felt a pop in his shoulder and was pinned moments later. Stickles was done for the rest of the tournament and had to forfeit his final two matches while settling for sixth place.

First-year head coach Daniel Reynolds, an assistant at the time, recently called it a “tragic” moment for a wrestler that Strasburg’s coaching staff expected to contend for the 132-pound crown.

“I just remember sitting in the training room and I’m just thinking ‘Why. Why does this have to happen right now when I definitely could still be out there wrestling in the state finals later that day?’” Stickles said last month.

“It took me at least a week just to kind of get my mind clear from it.”

As frustrating as his junior season was, Stickles is fortunate enough to have one more shot at winning his first state title. Unfortunately for the senior, he’ll have to chase that gold medal while dealing with many of the same obstacles that arose last year when he tore his labrum and rotator cuff in the 2018 preseason.

Stickles, who proclaimed himself healthy less than a week before Christmas, reinjured his shoulder on the second day of the Turner Ashby Holiday Tournament on Dec. 21.

Stickles, who said he was given the option of having season-ending surgery or doing eight weeks of physical therapy last year to strengthen his shoulder, again had to consider the option of shutting it down for good as a senior. After deciding that he wasn’t going to compete past high school and didn’t have a potential college wrestling future to worry about, Stickles chose to stick it out the rest of this season and returned to the mat in a limited capacity on Jan. 11.

“I just have to deal with it this year,” said Stickles, who added that he’ll have surgery in March. “It’s my last year. They said I’m already out for baseball, so this is my last thing I’ve got to look forward to. I’ve got to keep pushing through with it.”

Stickles is 23-1 with 11 pins at 132 pounds this season, and while his original plan was to return to the Rams in time for the Bull Run District tournament at the start of the postseason, he’s started working in some matches to keep the rust off.

In last Friday’s Strasburg Duals, Stickles went 3-0 in the Rams’ first three matches of the night before calling it quits and sitting out the final two rounds. His performance in that tournament included a 7-2 win over Broad Run senior Kadence Berrier, a 2019 Class 5 state qualifier, and a 2-1 victory over Liberty’s Austin Harris, a Class 4 state qualifier last season.

“He’s still getting mat time,” Reynolds said of Stickles’ approach to the rest of the regular season. “It allows us to formulate game plans with the way he feels. We know situations he gets in that are high risk, so we can coach around that.

“I think he’s doing well,” Reynolds added, “and part of it is him getting tougher with the injury. He’s decided he’s gonna tough it out, so he needs to embrace the toughness and not back down when it hurts. Even if it hurts like crazy, he’s gonna have to figure out a way to dig deep and pull himself up out of that pain.”

Stickles said he’s a “full go” in practice after operating under a modified routine for several weeks. Stickles credited former Strasburg standout Brandon Swink — the last Ram to win a state title (he won the Class 2 120-pound championship in 2017) — with helping get him back to full strength in the wrestling room since he reinjured his shoulder.

Stickles has also been getting help with his rehabilitation from Kirsten Campbell — a Strasburg grad and the older sister of Strasburg starting 182-pounder Alec Campbell — who is on track to earn a Doctor of Physical Therapy (DPT) degree from Marymount University in May.

“Right now (the pain) doesn’t really bother me because I’m getting used to it, just practicing every day with it,” Stickles said. “Just got to keep building up from there.”

Even through the injuries that have filled the past two seasons, Stickles’ high school career has been wildly successful. A self-described aggressive wrestler, Stickles has compiled a career record of 127-26.

A wrestler since he was 4 years old, Stickles established himself early on in his high school career as an annual contender at the state level in Class 2. He went 36-17 during his freshman season and progressed to the point where he was beating opponents in the postseason that he had lost to earlier in the year.

In one such example, Stickles said that in his first contested varsity match (he won his first two by forfeit) in 2016-17, he was pinned by Robert E. Lee (now Staunton High) junior Ta’ Strother in 25 seconds. Stickles avenged that loss in Salem at the end of the season with a 10-2 win over Strother in the state semifinals.

“When you get freshmen that have that success, the No. 1 thing, it doesn’t just happen,” Reynolds said. “It happens to kids that usually have a lot of experience. … It’s the confidence. They come in and they believe that they can do it. The coaches back them. As they progress through the season they have their records and their wins, and Peyton even suffered some big losses out of the gate against kids that he was gonna see, and in his freshman year he came back and beat those kids. That was a good sign for him as a wrestler. When you can go and lose to kids early on but then come back and beat them later, that shows that you can pick up on things or you can gain an advantage or just work to figure out how to beat kids after you’ve wrestled them before.”

Stickles followed that stellar freshman year with a 37-4 record in 2017-18, a season that included his first regional title. He was 31-5 as a junior last season, a remarkable record considering his health status.

Stickles admitted last month (before he reinjured his shoulder for a third time) that he probably should’ve delayed his 2018-19 return a couple more weeks to give his shoulder a little more time to heal — he returned for the Bull Run District Duals on Jan. 5, 2019 and reaggravated the injury that same day — but added that he didn’t regret his decision. He said with confidence last Friday that he’ll be able to stick out the remainder of his senior season.

Given how last season ended and with the clock on his high school wrestling career counting down, Stickles is competing this winter with a sense of urgency.

“It’s like the last chance to get that state title, to go up on the wall and be remembered. Everybody looks at those every day,” Stickles said in December. “It’s frustrating if I don’t win it, just thinking about that — I can’t think about that.”