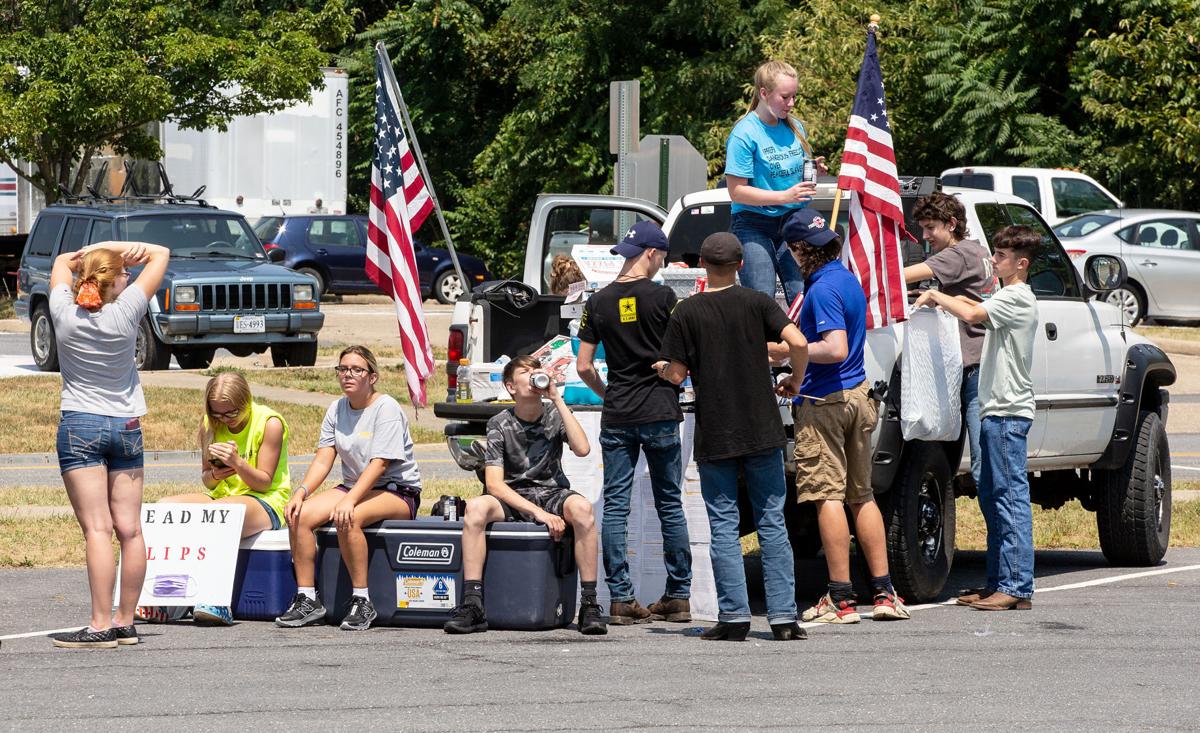 Some Central High School students gather in the school parking lot on Monday after leaving classes to protest the new mask mandate. 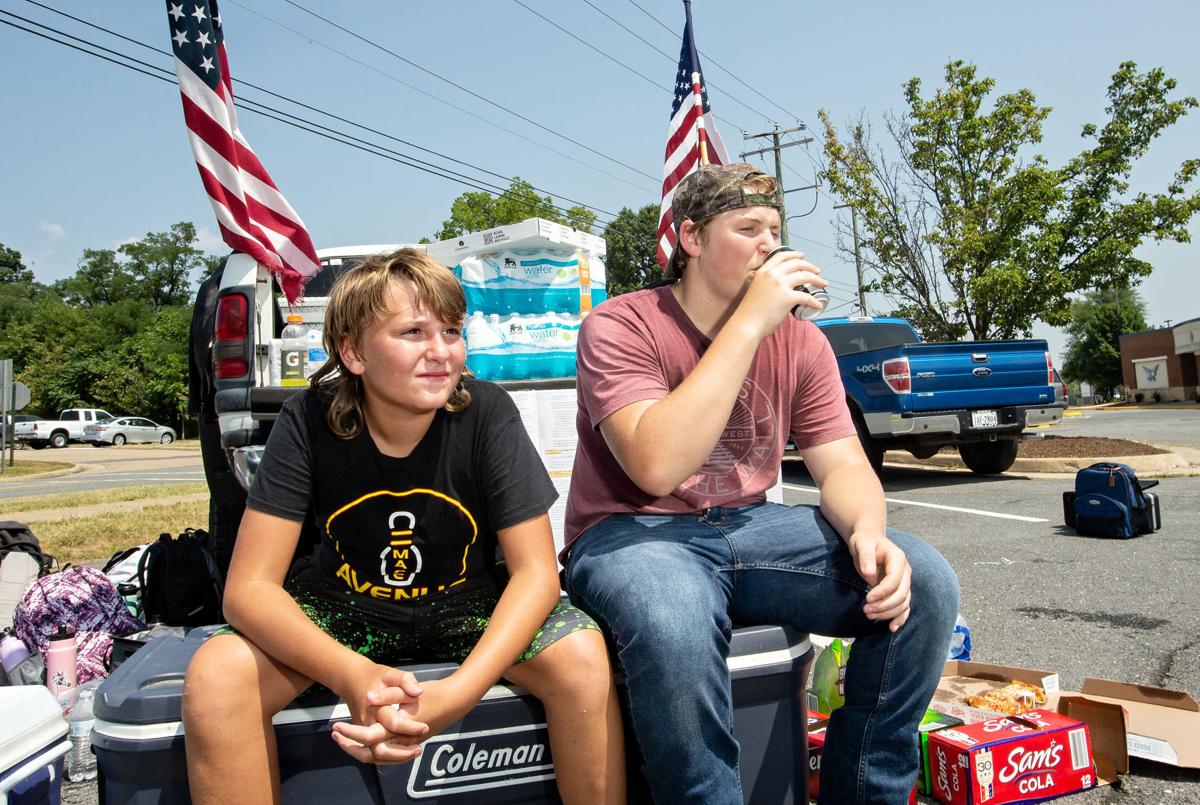 Central High School students Jordan Shoemaker, left, and Danny Poling, right, sit on coolers outside of the school during the protest. 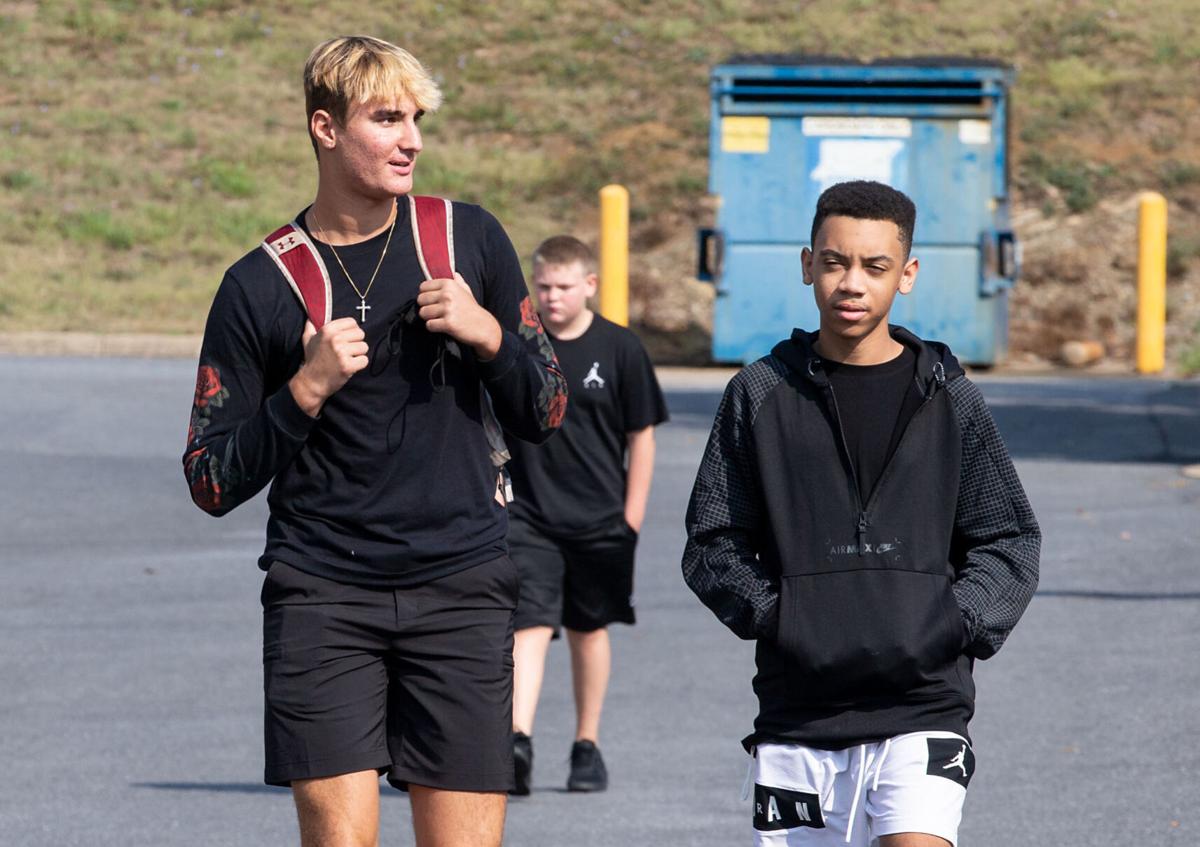 Walker Conrad, left, and Jalen Lee, right, sophomores at Strasburg High School, walk around the school parking lot on Monday morning for 15 minutes during a protest of the new mask mandate.

Some Central High School students gather in the school parking lot on Monday after leaving classes to protest the new mask mandate.

Central High School students Jordan Shoemaker, left, and Danny Poling, right, sit on coolers outside of the school during the protest.

Walker Conrad, left, and Jalen Lee, right, sophomores at Strasburg High School, walk around the school parking lot on Monday morning for 15 minutes during a protest of the new mask mandate.

Approximately 95 Shenandoah County high school students took part in protests against the new mask mandate that began Monday for students, teachers and all who enter the schools.

Central had the largest number of protesters, with approximately 50. They had a tent set up on the school parking lot and played music. Unlike at the other two high schools, Central's students did not return inside for classes after walking out at around 9:30 a.m.

Sophomores Russell Allen, Destiny Ogle and Noah Teets said they were the leaders in organizing the walkout at Central.

"On the first two days of school, we came back, we didn't have to wear a mask," Teets said. "And we have a suspicion that they knew we were going to be mandated today and they just wanted all the kids to come back so they could get federal funding from everybody. We wanted the choice of being able to go virtual if that was going to be mandated again. They wouldn't give us the option. So now we're here protesting and it's not that we don't want masks at all, it's that we want the freedom of choice."

Sheppard was at Strasburg High School on Monday morning, where approximately 15 students walked out for about 15 minutes before going back inside. There were about five or six parents there. Mountain View Principal Mike Dorman said in a phone interview Monday morning that about 25 to 30 students walked out at the school with a few parents there before going back inside about 15 minutes later. He said at lunchtime everything was going smoothly there and students were wearing their masks.

Sheppard said she went inside and walked around the halls at Strasburg High School and the students were wearing their masks appropriately.

Originally, the division had decided it would strongly recommend, but not require, that masks be worn inside.

Sheppard said everything changed on Thursday, which was also the first day of school.

"On Thursday, the governor (Ralph Northam) had a press conference that said that all school students must wear masks," Sheppard said while standing outside of Strasburg High School. "So we implemented that for Monday, which is today. We have students out here and a few parents out here who decided that they wanted to walk out to protest the mask mandate and we're just here to provide support and make sure that everything goes well and none of our students are in danger or harmed."

At Strasburg, sophomores Walker Conrad and Jalen Lee were the first ones to walk out the doors as they chanted "no more masks."

"I'm here because I don't want to wear a mask during school," Conrad said. "There's no point. We're already in a packed classroom. We're not even social distancing, so what's the point of wearing a mask?"

Sheppard said the students protesting on Monday would not be punished.

"It's freedom of speech," she said. "Our students do have the right to walk out and do this. Unfortunately, it's kind out of our hands as far as the masks are concerned, because it is a statute that we have to abide by."

The students at Central said they did not go back inside after 15 minutes because they wanted to make sure their voices were heard. Teets said they plan on doing it every day during school hours until they get their freedom.

"We didn't want it to just be a one-day event," Teets said. "We wanted them to know that we actually want something done about it. We're hoping to get with the superintendent and eventually get to the governor."

"If you want change, you got to be the change and this is the start of change," Ogle said. "If you don't want to stand up for what you want, you're never going to get it."

Teets said if they don't get what they want by protesting outside of the school, they will go outside the Shenandoah County School Board office.

"We're hoping to get the superintendent's eyes on us, which we probably already do," Teets said. "But we're just trying to get them here in person so we can talk to them and let them know how we feel, and hopefully they'll put it to the governor."

Sheppard wrote in an email Monday afternoon that she did talk with the students at Central during the afternoon.

"We discussed the statute that required school divisions to require face masks while indoors at schools and how the students could advocate to get the statute changed."

Shenandoah County Public Schools Assistant Superintendent of Administrative Services and Strategic Planning Dave Hinegardner was at Central throughout the day and wrote in an email Monday afternoon that "everything ended peacefully."

Teets and Ogle both said they are not vaccinated and do not plan on getting vaccinated. Teets said he has asthma and wearing masks makes it hard for him to breathe.

"If they came up with a better solution with masks that worked better I would wear it," he said.

COVID-19 is on the rise again, despite vaccines being available, throughout the region and the country.