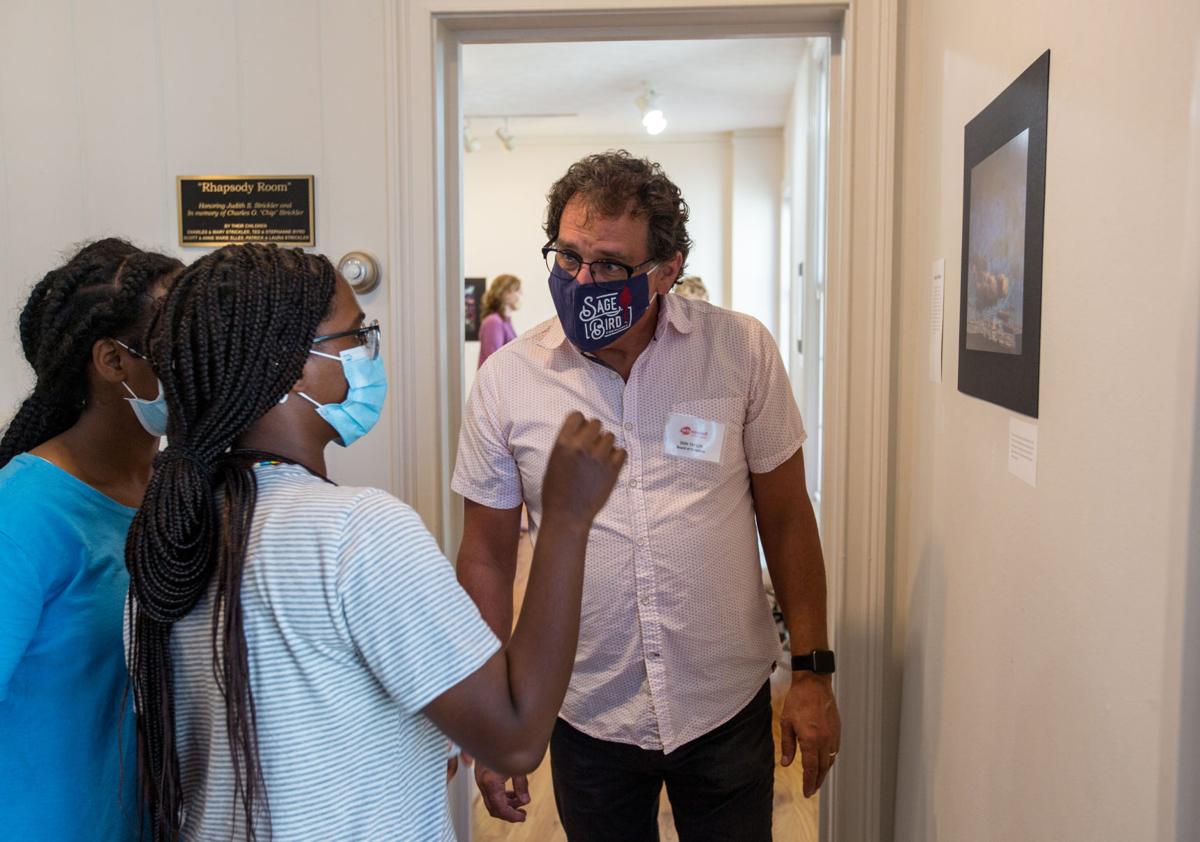 Soliana Medhin discusses her artwork with Arts Council of the Valley board member Don Taylor during the opening of Here + There at the Smith House Gallery. 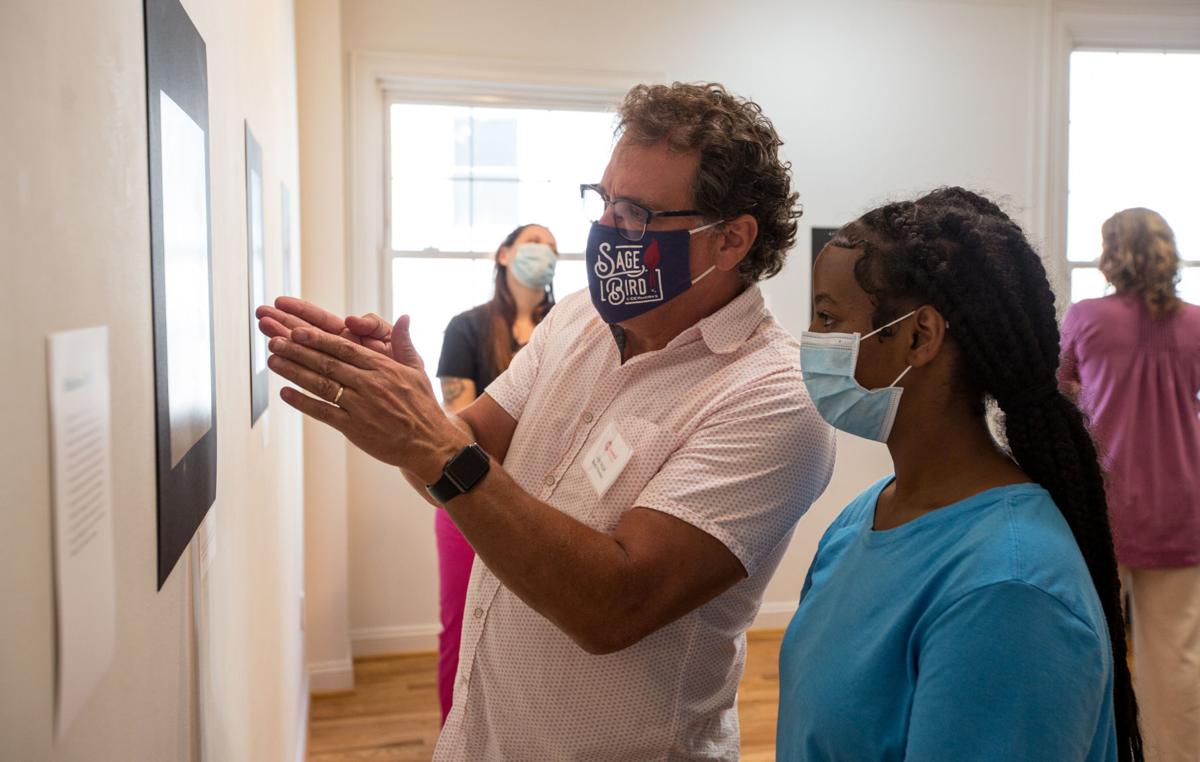 Hieldana Weldu discusses her artwork with Arts Council of the Valley board member Don Taylor.

Soliana Medhin discusses her artwork with Arts Council of the Valley board member Don Taylor during the opening of Here + There at the Smith House Gallery.

Hieldana Weldu discusses her artwork with Arts Council of the Valley board member Don Taylor.

In the northeast African nation of Eritrea, having coffee is much more elaborate than just ordering a drink from Starbucks.

Hieldana Weldu, a Harrisonburg High School student who came to the United States in 2014 after spending some time in Ethiopia, is from Eritrea, and said the daily practice of drinking coffee is a process that can take hours.

That’s why Weldu overlaid a picture of an Eritrean coffee set from her current home in Harrisonburg onto a photo that she took of James Madison University’s campus. The composite artwork represents the different layers and places that make up her personal identity that she shares with the public in an exhibit at Smith House Galleries called Here + There: Exploring Multi-Layered Identity Through Photography.

The exhibit features composite photographs from seven local students with refugee backgrounds. The composites are made from two images: one is supposed to represent life in Harrisonburg and the other heritage or a life in another place.

Roughly 15 students from Eritrea, Afghanistan, Democratic Republic of the Congo, Mozambique, Uganda, Iraq, Myanmar and other countries participated in a seven-session photography workshop at James Madison University, taught by Elisabeth Kvernen, assistant professor in the School of Media Arts and Design.

The workshop was supported by Church World Service Harrisonburg, SMAD, JMU’s Institute for Creative Inquiry and the JMU Faculty Senate. It culminated with the gallery show that some of the students from the workshop opted to create works for.

Kvernen said she grew up traveling the world and continued to live in different countries as an adult. She said she’s lived in Ethiopia, Nepal, India, Syria and Vietnam. Kvernen used photography to understand her own multi-layered identity after moving to Harrisonburg from Vietnam in 2020, posting composite images of places in Vietnam and the Blue Ridge Mountains.

“I think it’s a way of processing my experiences,” Kvernen said. “I think there can be a way in which you just compartmentalize — ‘that was then and this is now’ and they’re different worlds. And I grew up like that, moving a lot, and you tended to keep them separate, and these [composite photographs] are very integrated. So, visually, it’s overlaying it and it’s kind of giving you a whole new perspective. It’s a way of processing, it’s been good for me.”

Kvernen received a mini grant from the JMU Faculty Senate and received support from the Institute for Creative Inquiry. Church World Service of Harrisonburg connected Kvernen with students involved in the Mentoring Youth in Virginia program  that connects young people with refugee backgrounds with adults they can relate to and receive guidance from.

“We have several projects going on but this is the first art project that we’ve done in a while,” said Rebecca Spraig, CWS Harrisonburg youth and employment program coordinator. “Elizabeth approached us and had this great idea for offering an after-school program for kids with refugee backgrounds. [Kvernen] taught all the classes and I made sure the kids had rides to and from.”

Spraig said she works as a bridge to connect programs like Kvernen’s with existing after-school programs in the community.

“So, [for example], what we’re doing with the [JMU] computer science department is having a fun summer week intensive program to say this is computer programming and we do that every year. And once [the high schoolers] know that’s what computer programming is, we say there are electives in the high school, there’s an after-school program with On The Road Collaborative,” Spraig said. “So it’s saying, this is what it is, in order to get good at it you have to practice regularly. Part of what we’re trying to do is get people comfortable [playing] with different programs.”

Daniel Robinson, director of ICI, supported the project and found the gallery slot for it after a similar project with photographer Wendy Ewald had to be pushed back. He shared the role CWS played in both projects.

“For [the Ewald] project, [CWS has] a very strong sense of the needs of the people who come through their office, and me personally, I don’t,” Robinson said. “My skills are in photography and art making and not the kind of social work that happens to resettle someone that’s going through a very difficult time in their life. They were very clear about ways [to help] that could work and ways that might not work.”

Students in Kvernen’s workshop took pictures on campus at JMU and learned to use simple photo-editing software to overlay different pictures. For the students that opted for the gallery show, Kvernen visited their homes and helped them think out the meaning behind the images in their work.

“It seemed like a natural fit [for the gallery slot],” Robinson said. “It also had similar themes not about let’s go take pictures of refugees and show people, but let’s work with the actual humans ... to express themselves and use our place of privilege in whatever way ... to get those voices to more people.”