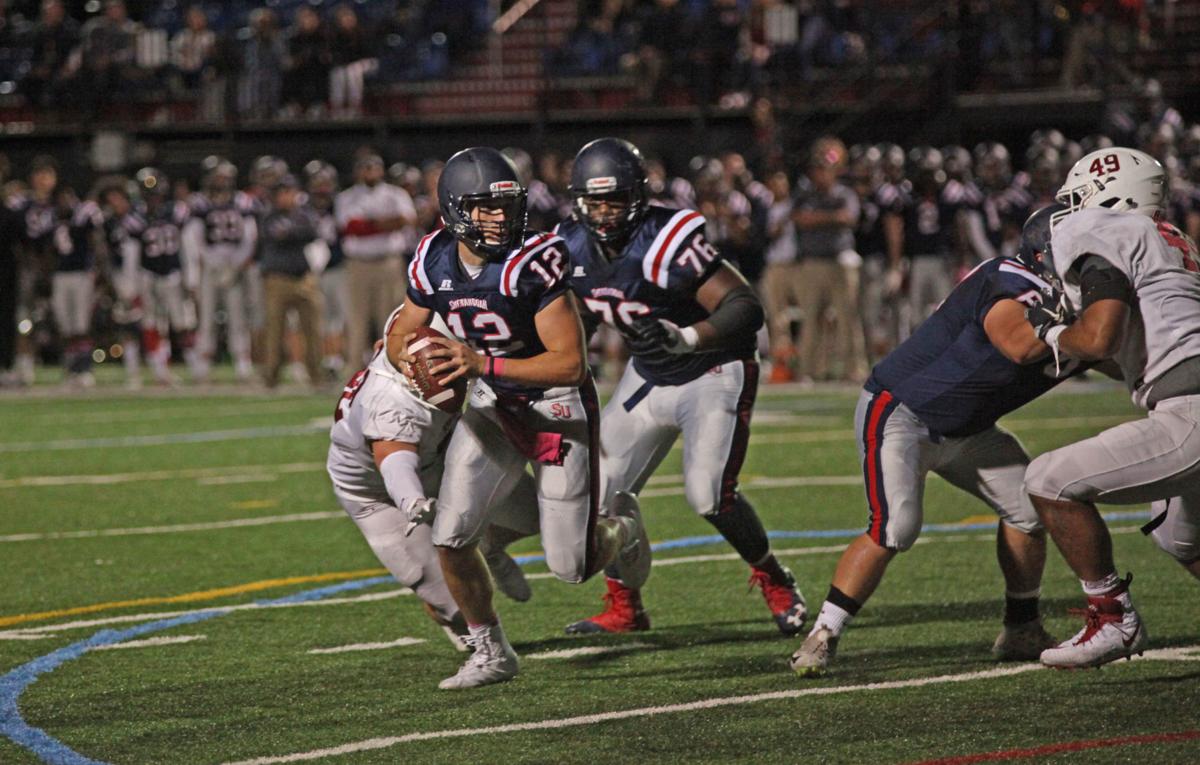 Shenandoah University quarterback Ben Agostino passed for 509 yards and six touchdowns in a 42-14 win over Southern Virginia on Saturday night at Shentel Stadium in Winchester. 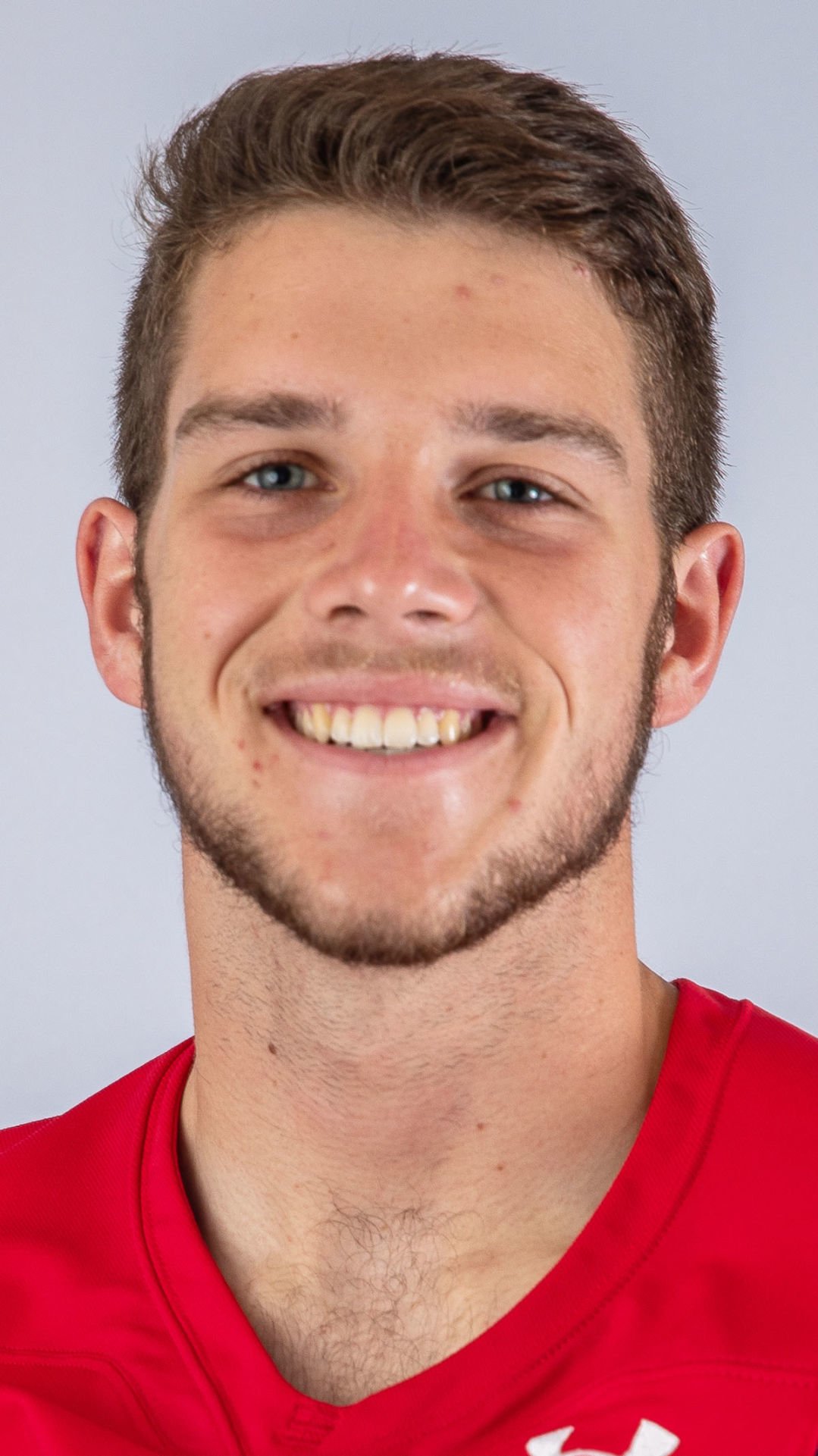 WINCHESTER – Shenandoah University’s football team used two quarterbacks for the first three games of the season, as neither Ben Agostino nor Ben Rhodenizer showed coaches enough in the preseason for them to settle on a single signal-caller. Agostino, through his play, made a very loud claim to being named SU’s every-down quarterback on Saturday night.

Agostino dazzled a homecoming crowd at Shentel Stadium in a 42-14 win over Southern Virginia, completing 36 of 44 passes for 509 yards and six touchdowns in what was easily the best performance of his limited college career.

It was the third career start for the junior, who came off the bench behind Rhodenizer in the season opener, played nearly the entire second half of that game and led a pair of fourth-quarter touchdown drives to seal a win at North Carolina Wesleyan on Sept. 14.

Agostino has started and out-snapped Rhodenizer in three games since then, and Saturday marked the first time Agostino took every snap for Shenandoah’s offense. Head coach Scott Yoder said after Saturday’s win that the plan going into the game was to continue to give Rhodenizer snaps, adding that Agostino was so hot during the game that he “didn’t want to touch it.” Yoder agreed that Agostino created some separation in what to that point had been a tight competition for the starting QB job.

“How could you not think that?” Yoder said. “I’ve got to watch the film. You’ve got to watch the film and you always think things the night of and after you watch the film it’s a little different, but he had a great performance tonight and I think moving forward we want to build on that. Rhodey could do the same thing, so we’re not gonna close the door on anybody, but I think he probably had that performance that he’s wanted to have to kind of take control of this thing.”

Agostino, who was named the Old Dominion Athletic Conference Offensive Player of the Week on Monday, was what Shenandoah’s offense had become accustomed to with former quarterback Hayden Bauserman. Agostino threw short passes on time and on target, showed nice touch on deep balls and avoided pressure when he had to. Agostino wasn’t sacked and didn’t turn the football over against a Southern Virginia team that had an ODAC-best eight interceptions entering the game.

Sophomore receiver Ethan Bigbee said he could see Agostino growing as a quarterback as the game went on.

“I feel like just his whole demeanor just overall just got better through the whole game,” Bigbee said. “He was seeing the field a lot better. I feel like he’s just gonna go up from here. He’s got the great physical ability, throws a great ball. He’s just a really good quarterback.”

Like his record-setting predecessor, Agostino deflected praise after the game.

“Really excited for our team,” he said. “We worked really hard this week. We knew we had a good game plan coming in, and just excited for everyone involved. It was a team effort and everyone executed in all three phases.”

PASS-CATCHING PROWESS: Shenandoah’s receivers did their part in making their quarterback look good against the Knights. Five Hornets finished with at least 78 yards receiving and at least one reception of 38 or more yards, and three receivers – Bigbee, junior Brant Butler and junior Jake Wallace – finished with two touchdown catches.

Wallace, who led the team with 11 catches for 123 yards, got involved early and had nine receptions for 72 yards at the half. Butler showed his versatility, making a spectacular leaping grab with a defender in his face on a fade for SU’s first TD and hauling in a 38-yard touchdown as he raced past the defense for the game’s final score in the fourth quarter.

Bigbee showed great burst – and footwork to dodge a Southern Virginia defender – on a short catch that he turned into a 40-yard TD reception to answer a Knights TD in the third quarter; Stewart, who led Shenandoah with 139 yards receiving, made a trio of acrobatic catches along the sideline, including two that went for 36 and 34 yards during two different scoring drives; and freshman Miles Moore, who caught a 15-yard touchdown pass for his first collegiate score two weekends ago, continued to emerge as a deep threat and caught passes of 40 and 38 yards on back-to-back fourth-quarter possessions that ended in Shenandoah touchdowns.

Offensive coordinator Stan Hodgin spoke in the preseason of the importance of taking advantage of SU’s skill at receiver this season regardless of who was playing quarterback, and Saturday’s win represented season highs in passing yards, total yards (601) and points for the Hornets’ offense.

“We’re really loaded on the offensive side, for sure,” Bigbee said. “Especially our receiver group, I feel like we have one of the best in Division III across the nation. We were just kind of waiting for the chance to show our abilities and tonight was that night. Just took advantage.”

TAKING STRIDES: Overshadowed by Shenandoah’s offensive outburst was the second straight solid showing by the Hornets’ defense, which vowed improvement this season and has taken tremendous strides in that department over the last two weeks.

Wedge, who entered the game as the ODAC’s leading rusher while averaging nearly 150 yards per game, had 84 yards on 24 carries against Shenandoah and was held out of the end zone.

The Hornets have 19 tackles for loss in the past two games, and the 316 yards they allowed against Southern Virginia were a season-low. Sophomore defensive end Jordan Rice said defensive performances like the ones SU has put together over the past two weeks were what the Hornets envisioned when they talked of improvement in the preseason.

“I feel like we definitely are (taking strides),” Rice said. “I mean we’ve all been working ridiculously hard since the summer, and our coach has always told us he wants us to be elite, be great, so when we’re held to a high standard, we work harder to maintain it.”