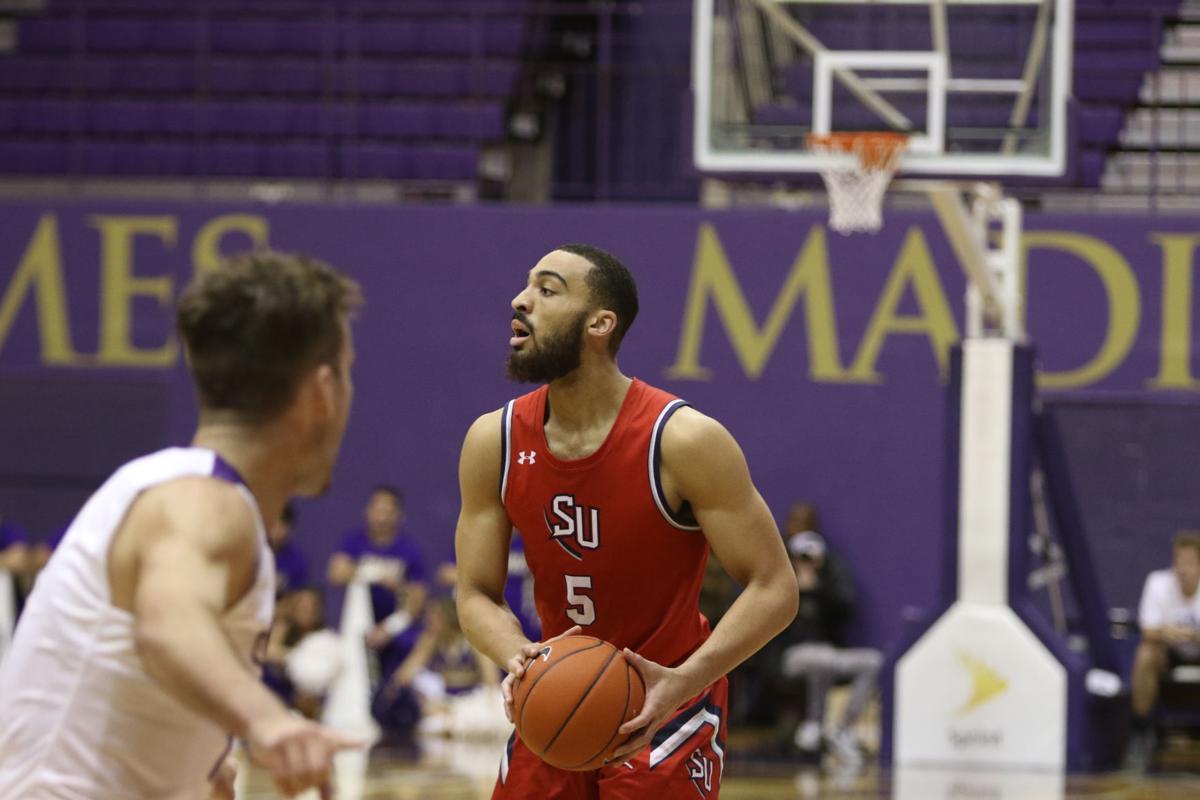 Zach Garrett averaged 14.6 points per game over his last 14 games last year and recorded 20 points, nine rebounds and six assists in SU’s exhibition win over Mary Baldwin. Garrett and the Hornets open their regular season at 3 p.m. today against Bridgewater on the road. 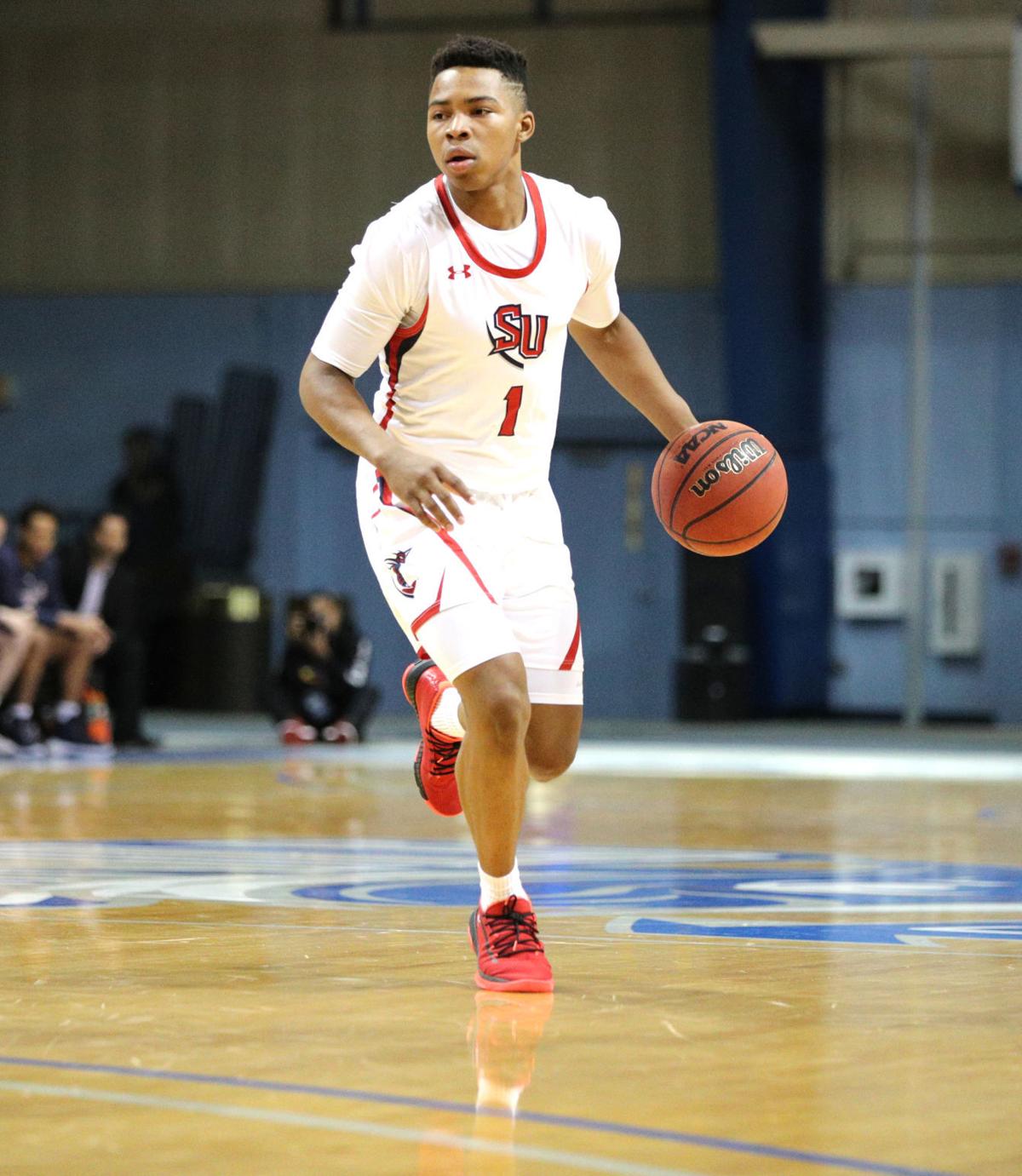 After missing all but one game last year because of a torn meniscus, 2018-19 ODAC Rookie of the Year Jaylen Williams is back to provide much-needed ball-handling ability for Shenandoah in the coming season.

Zach Garrett averaged 14.6 points per game over his last 14 games last year and recorded 20 points, nine rebounds and six assists in SU’s exhibition win over Mary Baldwin. Garrett and the Hornets open their regular season at 3 p.m. today against Bridgewater on the road.

After missing all but one game last year because of a torn meniscus, 2018-19 ODAC Rookie of the Year Jaylen Williams is back to provide much-needed ball-handling ability for Shenandoah in the coming season.

After ending the 2018-19 season on a 10-game losing streak, the Shenandoah University men’s basketball team finished the 2019-20 season on an eight-game skid.

The difference? That 5-20 team two years ago suffered two losses in overtime down the stretch, but the rest were all double-digit defeats with an average differential of 19.9 points. Last year’s injury-plagued 6-19 team lost five of its last six games by 6 points or less.

So while the Hornets (3-15 in Old Dominion Athletic Conference play) were picked to finish 10th in the 13-team ODAC on Wednesday by the league’s coaches, SU fourth-year head coach Adam Walsh feels like the Hornets are close to making a bigger impact in the league based on their ability to compete well despite their injury problems.

In a phone interview last week, Walsh said his main goal is to get his players prepared for life after college. But that journey is more enjoyable when Shenandoah has more points on the scoreboard than its opponent more often than not.

“We had eight games where we lost by two possessions or less last year,” said Walsh, whose team opens its abbreviated 2021 season at 3 p.m. today at Bridgewater College. “... We want to win. There’s nobody in our locker room who doesn’t want to win, and I think we have the best team that we’ve had since I’ve got here.

“I’m very confident saying that. I think we’re in a place where we start taking steps forward. We were doing that last year. We were playing with zero point guards in the last game we played of the season. If we had one or two of our point guards for the [entire] season, I like our chances in those eight two-possession games.”

In a 12-game season that was originally designed to have an exclusive round-robin ODAC format, Walsh feels health will play a huge role, whether it be injuries or illness.

COVID-19 has already had an impact on the Hornets’ schedule. SU was originally supposed to open its season with Emory & Henry today, but that game was canceled due to COVID-19 reasons. Any game that can’t be played on its original date due to COVID-19 protocols will not be made up this year. SU’s only game that won’t count toward the ODAC standings will be on Feb. 11, when it hosts Bridgewater.

Williams was the ODAC Rookie of the Year in 2018-19 when he averaged 13.2 points (he led all ODAC rookies with 329 points), 4.2 rebounds and 2.2 assists. But last year his season ended in just the second game of the year, as Williams suffered a torn meniscus against Christopher Newport University. Roberts (5.3 points, 2.0 assists, 1.5 steals) played in just four games (the last on Nov. 30) as a result of cartilage damage in his knee.

While the position of point guard is always an important leadership position, 6-4 junior guard Zach Garrett’s presence also will be key in that area this season.

In his first year at SU after transferring from George Mason, Garrett got better and more comfortable as the year went on. Garrett averaged only 2.8 points per game through his first 10 contests last year, but over his last 14 games he averaged 14.6 points, scoring in double digits 11 times and recording two 21-point games. He ended the year second on SU in scoring (9.7 points per game) and third in rebounds (4.0). Forward Christopher Chaney, who graduated and was a third-team All-ODAC pick last year, led SU in both of those categories (14.4 points, 8.8 rebounds).

“I would like to put a lot on Zach’s shoulders because of the year he had last year,” Walsh said.

“Over the summer, I tried to work on my passing game a little bit more,” said Garrett in a phone interview last week. “More of my off-hand passing. Hopefully, I’ll try to incorporate that into my game this year, just moving the ball and passing the ball better than I did last year.”

Walsh is also counting on 6-0 senior guard/forward Avery White (5.3 ppg last year, 3.1 rebounds, 13 points in the exhibition) to be a team leader. White battled a torn tendon in his finger but still managed to play in 21 games (16 starts) last year.

In addition to Anderson (two steals in the exhibition), SU’s additions include 6-1 junior guard Dylan Elliott, a transfer from NCAA Division II Kutztown University in Pennsylvania who is a solid catch-and-shoot player that can also handle the ball; and 6-3 guard/forward Andres Frye (McLean School), who had 10 points and two steals in the exhibition.

One player who SU fans won’t get to see this year is Harry Wall, a 5-9 guard who averaged 6.4 points and a team-high 3.0 assists while making 22 starts as a sophomore last year. Wall is a New Zealand resident – where COVID-19 has been virtually wiped out – and would have to pay to go through New Zealand’s quarantine process a second time had he elected to return to the U.S.

Only the top four teams in the ODAC standings will play in the ODAC Tournament this year (the semifinals are on March 4 and the championship is March 6). Walsh certainly wouldn’t complain if the Hornets are involved in that, but the main thing he wants is for this season to set the tone for a presumably full slate of games in 2021-22. NCAA Division III athletes are being given an extra year of eligibility this year due to COVID-19 disruptions, so Walsh could have his entire team back.

“I look at this season as a chance for us to get better for next season,” Walsh said. “This is a free year for the guys, so let’s make the most of it. Let’s become the best basketball players we can become. Let’s learn the game more.”

“I think we’ve all been doing a great job [preparing for the season],” Garrett said. “I’m really excited about what we have. I think we have a lot more guys who can do a lot more things this year. I think the future is very bright.”